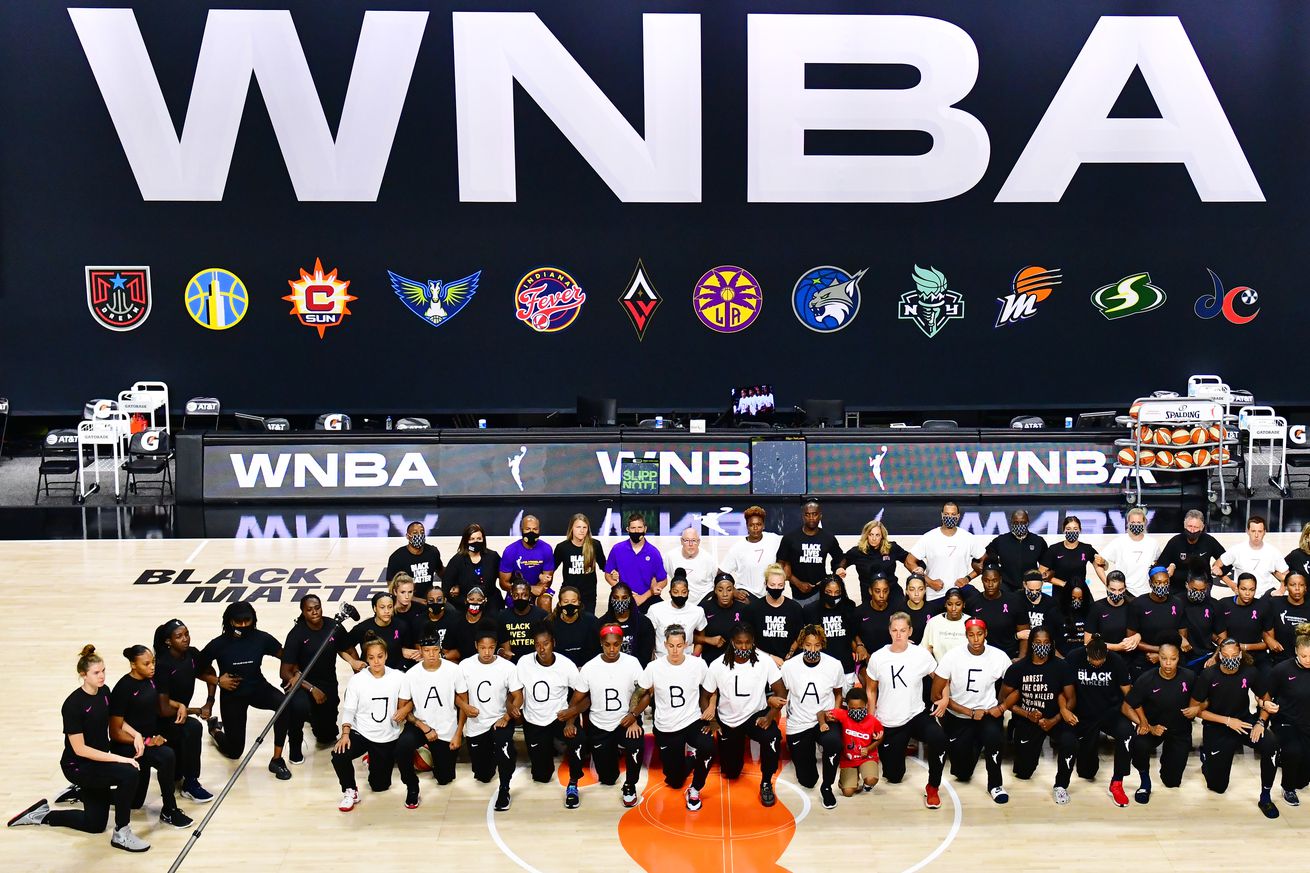 The WNBA’s reaction to the police shooting of Jacob Blake was a powerful moment in a season full of on- and off-court highlights. | Photo by Julio Aguilar/Getty Images

In a season played in extraordinary conditions, the WNBA delivered its usual excellent on-court product while continuing to pave the way for athletes speaking on social justice. We count down 10 moments that made the 2020 season special.

The 2020 WNBA season is now in the books, its condensed 22-game regular season and subsequent postseason flying by seemingly as quickly as it had originally been postponed.

With the WNBA deciding to play in a “bubble” environment in Bradenton, FL, things were bound to look different right from the start. Factor in strong social justice initiatives, playoff buzzer-beaters and record-breaking performances from some of the league’s top players and you have one of the most memorable seasons in league history, regardless of its length.

Before getting into the basketball itself, we must remember that the entire 2020 WNBA season was played in memory of Breonna Taylor, who was murdered by Louisville police inside her home. All players wore her name on the backs of their jerseys, with several players, such as the New York Liberty’s Layshia Clarendon and the Washington Mystics’ Ariel Atkins, making it a point to continue speaking up for social justice throughout the season during interviews — even from the sidelines during games.

The shirts had seven dots on the back, representing the seven gunshots that police fired at Blake. pic.twitter.com/svCtf3FJ2w

The police shooting of Jacob Blake in August only strengthened the WNBA players’ resolve. Following a long and passionate discussion, they took what players’ union president Nneka Ogwumike called a “day of reflection,” and forced the league to postpone games for two days. The demonstration was iconic: Every WNBA player in the bubble stood together, arms locked, wearing shirts that read, “Arrest the cops who killed Breonna Taylor.”

SHEY PEDDY FOR THE WIN

The @PhoenixMercury advance to the second round of the @WNBA playoffs! pic.twitter.com/Nva0Ze7OGL

Shey Peddy may not have been a household name prior to 2020, but her game-winning shot in the first round of the playoffs was among the season’s most dramatic moments. Peddy, who started the season with Washington before being waived and subsequently picked up by the Phoenix, hit a 3-pointer at the buzzer that sent the Mercury to the next round and her former team home. How’s that for redemption?

Minnesota Lynx center Sylvia Fowles has been dominating the paint for over a decade, and her longevity became immortalized in late July when she grabbed her 3,357th career rebound and broke former teammate Rebekkah Brunson’s mark for total rebounds in a WNBA career. Though Fowles’ season was cut short by injury, the 35-year-old two-time champion further extended her record to an even 3,400 total rebounds.

Seattle Storm point guard Sue Bird has been at it for a while, too, but the 39-year-old champion keeps making history. In Seattle’s Game 1 Finals victory over the Las Vegas Aces, Bird dished out 16 assists — not only a personal single-game record, but a record for assists by any player in a postseason game. The previous single-game postseason high of 14 assists also was set by Bird — way back in 2004.

Like most WNBA teams, the Las Vegas Aces took several hits to their roster before making it to Bradenton, losing guard Kelsey Plum to an Achilles injury while center Liz Cambage was granted a medical exemption. Forward A’ja Wilson picked up the slack, however, willing Las Vegas to the No. 1 overall playoff seed and the franchise’s first Finals appearance since it relocated from San Antonio in 2017. Wilson earned Most Valuable Player honors and was named to the All-WNBA First team for her efforts.

It’s been a historic few years for Chicago Sky point guard Courtney Vandersloot, who just keeps setting records. After breaking her own record for assists in a season in 2019, with 300, Vandersloot became the first player in WNBA history to average 10 assists per game in 2020. She also broke the record for most assists in a game, dishing out 18 of them against the Indiana Fever.

Laney and Hines-Allen duke it out for Most Improved

Every season, there are great stories of WNBA players exceeding expectations with breakout seasons, and 2020 was no different. Mystics forward Myisha Hines-Allen took advantage of a depleted Washington roster and played by far the best basketball of her WNBA career, averaging 17 points and 8.9 rebounds per game. Similarly, Dream guard/forward Betnijah Laney turned a last-minute opportunity with Atlanta into a career year, scoring 17.2 points and leading her team with four assists per game. Laney edged out Hines-Allen in Most Improved Player voting, winning the award with 25 votes to Hines-Allen’s 21.

Dangerfield wins Rookie of the Year

Standing just 5’5”, and even that might be generous, there were concerns about Dangerfield’s height entering the 2020 WNBA Draft, and the UConn product fell to the Lynx at No. 16 overall. She quickly proved she belongs in the pros, however, seizing an opportunity as Minnesota’s starting point guard and never letting go. Dangerfield became the first second-round draft pick in WNBA history to win Rookie of the Year honors.

Having brought back Bird and 2018 MVP Breanna Stewart from injury, the Storm were a common pick to win the WNBA championship entering the 2020 season, and they didn’t let their believers down. Seattle led the league in both offensive and defensive efficiency and went a perfect 6-0 in the playoffs to earn its fourth title in franchise history and second in three seasons. Stewart completed her remarkable comeback story by winning her second Finals MVP award.