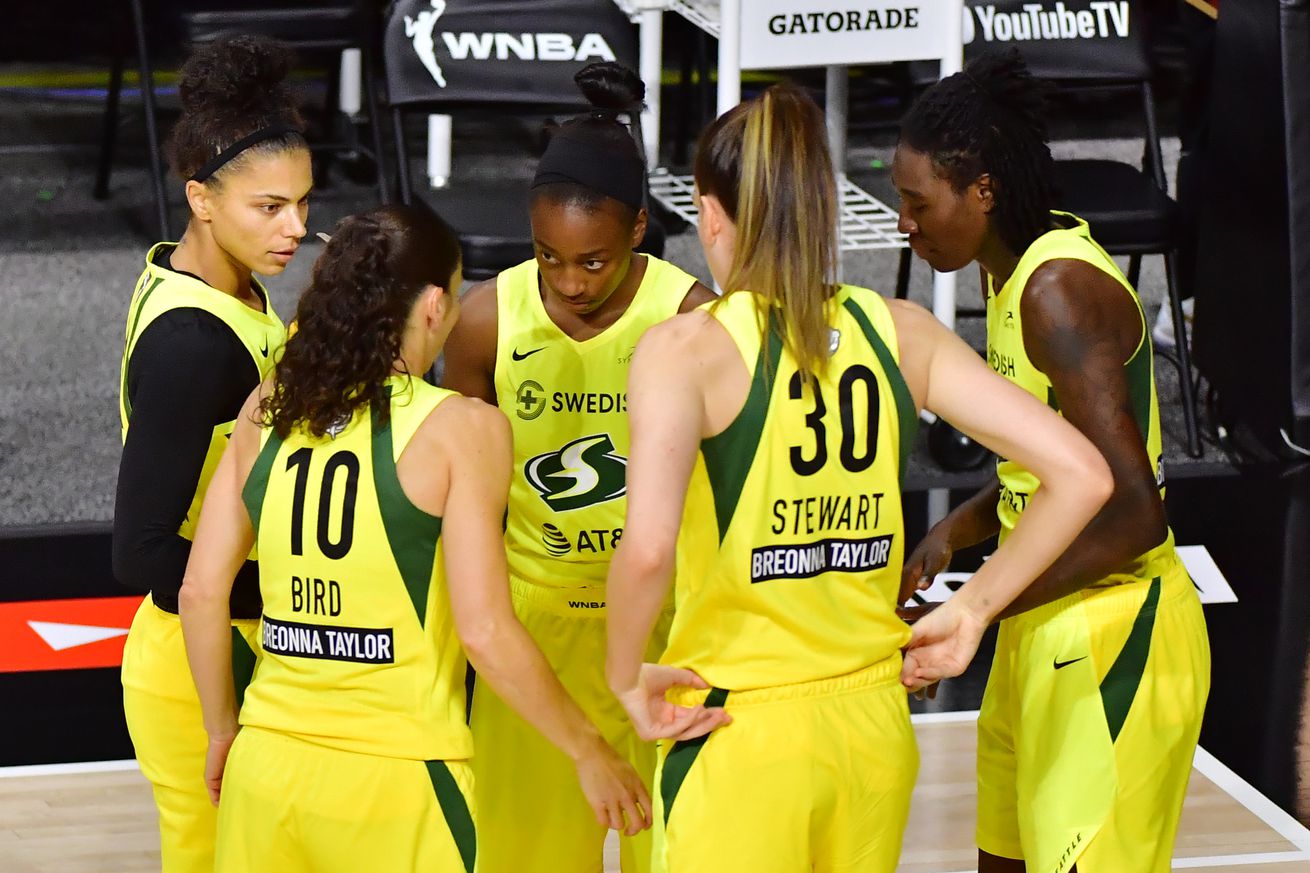 From left to right: Alysha Clark, Sue Bird, Jewell Loyd, Breanna Stewart and Natasha Howard make up the phenomenal starting five that has led the Storm to the brink of a championship. | Photo by Julio Aguilar/Getty Images

Breanna Stewart has been the definitive best player in the 2020 WNBA Finals but give credit to the rest of the Seattle Storm’s starting lineup for putting up big numbers as well. They will try for another comfortable win in Game 3 but MVP A’ja Wilson and the Las Vegas Aces will fight to make it a series.

When the Seattle Storm take the court tonight at 7 p.m. ET for Game 3 of the WNBA Finals, they will be aiming for a three-game sweep of the Las Vegas Aces and the right to raise their fourth championship trophy.

The Aces enter tonight's game hoping to extend the best-of-five series, but it will be a tall task against the Storm’s momentum.

The game will be televised on ESPN.

Games 1 and 2 unfolded in similar ways. The Storm built up a big lead in both games only to see the Aces come back and make it close. Seattle then pulled away with two great fourth quarters to win by 13 points in each outing. If Las Vegas wants to win Game 3 and begin a comeback in the series, they will need to avoid the same narrative.

Some things went well for the Aces in Games 1 and 2. A’ja Wilson and Angel McCoughtry played well and the team performed well from beyond the arc. The star tandem has combined to average 38 points and 15 rebounds for the series and the Aces are shooting 18-of-40 (45 percent) from distance.

However, the two things the Aces pride themselves on are scoring points in the paint and getting to the free-throw line. In Game 1, they were outscored 48-18 in paint and in Game 2 they attempted just five free throws.

Las Vegas swept Seattle in the regular season but Seattle has played at its best in the Finals and it has been too much to handle.

Storm superstar Breanna Stewart led the way in the scoring in both contests. With 37 points in Game 1, she was one shy of McCoughtry’s record for points in a Finals game and she notched 22 points in Game 2. Jewell Loyd added 28 points in the series opener and Alysha Clark and Natasha Howard each scored 21 for the Storm in Game 2.

To round out Seattle’s starting lineup, Sue Bird has stolen a lot of the headlines with 26 assists in the two games combined.

The Storm have done a good job of not getting discouraged when the Aces have gone on their runs and if they continue with their positive mindset they will put themselves in a good position to close out the series.

Keys to the matchup: For the Storm, maintaining their identity. The Aces have allowed the Storm to shoot 53.5 percent from the field and the Storm’s average of 98.5 points is nothing to sneeze at either. The Storm have had a best-case outcome through two games and it has come from sharing the ball like they’ve done all season.

For the Aces, defense, which has been their Achilles’ heel. The Aces have to disrupt the Storm’s offensive flow and slow their momentum because the Storm’s stars are playing at their best on offense and role players are making consistent contributions.

Highlights: The league-leader in assists, Seattle stays at it in the Finals