2020 WNBA Finals Game 3 Recap: Storm too much for depleted Aces 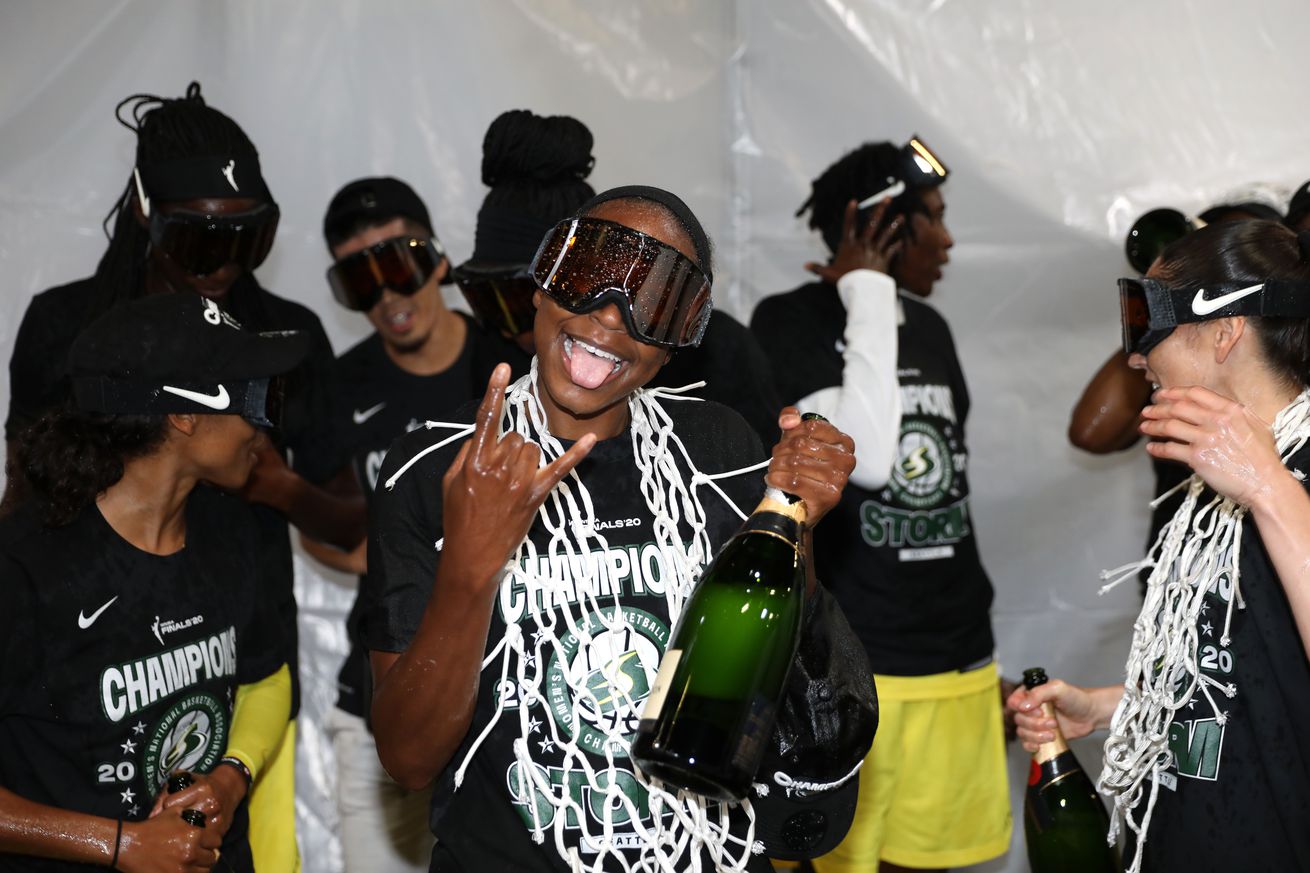 Jewell Loyd holds the champagne bottle as the Seattle Storm celebrate their second championship in three years on Oct. 6, 2020 at IMG Academy in Bradenton, Florida. | Photo by Stephen Gosling/NBAE via Getty Images

The Seattle Storm were dominant in a 92-59 blowout of the depleted Las Vegas Aces in Game 3. Breanna Stewart was named WNBA Finals MVP.

Breanna Stewart finished with 26 points on 10-of-14 shooting and was awarded the 2020 WNBA Finals MVP trophy after averaging 28.3 points through the three-game series. It is Stewart’s second WNBA Finals MVP award.

Las Vegas got off to a fast start, opening up an 11-2 lead. Seattle rebounded quickly and held a 23-21 lead after Jordin Canada scored two baskets in the final 40 seconds of the quarter. The Storm pushed their lead to nine points by halftime. In the third quarter, the Storm expanded the lead by outscoring the Aces 32-14. Both teams cleared their benches in the fourth as the Storm closed out their second championship in three years.

A’ja Wilson scored 18 points on 7-of-15 shooting (46.7 percent), her best of the series. Jackie Young scored 11 points off the bench and was the only other player to score in double figures. Angel McCoughtry scored seven points on 2-of-7 attempts. Kayla McBride averaged 6-of-13 shooting from beyond the arc in the first two games but attempted just two 3-pointers in Game 3, and made just one. McBride finished with nine points on 3-of-7 shooting.

The Storm were a model of efficiency:

shooting 47.7 percent from the floor

The Aces turned the ball over 16 times and were stifled by the Storm’s defense, which limited them to 34.4 percent shooting.

As the 2020 WNBA season concludes, fans of the league should take time to remember how incredible the season was and how lucky we were to have had a season at all, given the circumstances. The “wubble” provided great basketball, healthy athletes and an important conversation around social justice that the WNBA will continue long after this season.

The Aces look to be favorites to make it to the 2021 WNBA Finals, with Kelsey Plum returning to full health after an Achilles injury and Liz Cambage rejoining the team. The Storm look loaded going forward, even with an aging Sue Bird. And it appears Breanna Stewart and Jewell Loyd will dominate the league for years to come.