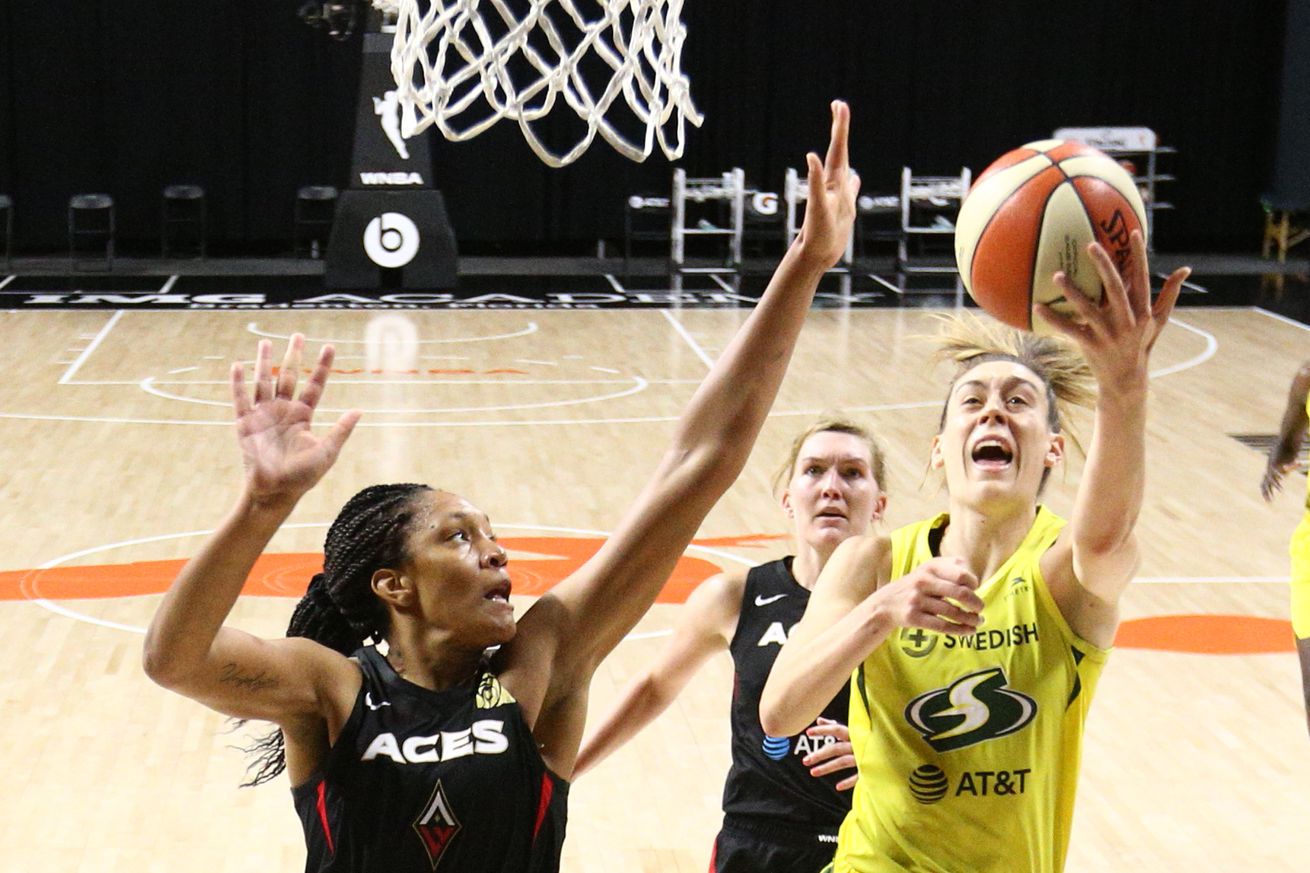 The WNBA’s top two teams — and arguably its top two players — will meet in the 2020 Finals. The Aces’ A’ja Wilson and the Storm’s Breanna Stewart will have center stage. | Photo by Ned Dishman/NBAE via Getty Images

The Seattle Storm own a 3-for-3 WNBA Finals record and will vie for a franchise-fourth championship. The Las Vegas Aces will try to cap a magical season in the best way possible — completing an underdog story that features a rising young MVP.

The highly-anticipated 2020 WNBA Finals will begin Friday night and pit the No. 1-seed Las Vegas Aces and the No. 2-seed Seattle Storm against each other.

Each game of the best-of-five series will be televised nationally.

Las Vegas and Seattle both finished the regular season with 18-4 records and their regular-season series awarded the tiebreaker to the Aces. Under normal circumstances, this would mean the Aces would have homecourt advantage in the Finals. However, with the 2020 season being played in a remote “bubble” location in Bradenton, Florida, the tiebreaker ended up not mattering.

It wouldn’t be surprising to see at least one game in this series come down to a duel between star forwards A’ja Wilson and Breanna Stewart.

Instead, we’ll get a neutral-court series between the WNBA’s two top teams.

The Aces lost several key contributors from last season’s semifinals run — starting center Elizabeth Cambage and starting guard Kelsey Plum — but quickly proved they had enough pieces to win in 2020. Las Vegas secured the No. 1 overall playoff seed in the final moments of the regular season — a feat that would have been considered a longshot months prior.

A’ja Wilson was a major reason for Las Vegas’ success. Now the lone star in the Aces’ frontcourt, the third-year forward continued her ascent to WNBA stardom, winning league MVP honors after leading Las Vegas on their improbable regular-season run — one that included a pair of victories over Seattle, the preseason favorite to win it all.

While a determined Connecticut Sun gave the Aces problems in the semifinals, Las Vegas prevailed in five games and earned a trip to the WNBA Finals on the shoulders of Wilson and league legend Angel McCoughtry. Without Sixth Woman of the Year Dearica Hamby, who is out for the remainder of the postseason with a knee injury, the odds might be against the Aces. But maybe they like it that way.

An uphill battle certainly hasn’t been a deterrent thus far.

Danielle Robinson, PG: Robinson moved from the bench to the starting lineup after Game 1 of the semifinals. While her scoring was inconsistent, she played heavy minutes in Games 4 and 5 — 36 in each game — and recorded five steals. She was effective against the Storm in the regular season, eclipsing double-figure scoring in both games while totaling 11 assists to just four turnovers.

Kayla McBride, SG: McBride is the best shooter on the Aces’ roster but she’s struggled in the postseason, making just 14.3 percent of her 3-pointers against the Sun. McBride had similar results against Seattle in the regular season, shooting just 6-for-21 from the field in those two games.

Angel McCoughtry, SF: Though McCoughtry has played more of a complementary role in 2020 than we’re used to seeing from her, she was unleashed late in the semifinals and her 49 total points in Games 4 and 5 are a major reason the Aces have gotten this far. She recorded a double-double of 13 points and 14 rebounds (with three assists and three steals) in the first regular-season game between the two teams. She played just five minutes in the second regular-season matchup.

A’ja Wilson, PF: The 2020 MVP has carried her dominant play into the postseason, averaging 21.8 points (51.9 percent shooting), 10.4 rebounds and three blocked shots in the semifinals. Wilson totaled 46 points in two regular-season games against the Storm.

Carolyn Swords, C: Swords has never been one to put up big individual statistics, though she’s been solid in an increased workload since Sixth Woman of the Year Dearica Hamby went down with a knee injury. The veteran center pulled down 10 rebounds and was a plus-18 in the box score in the Aces’ deciding Game 5 semifinals victory.

All eyes will be on Wilson — as they should. Against a loaded team like the Storm, the Aces will need their MVP to be at her absolute best throughout the series. McCoughtry, too, must sustain her play from the final few games of the Aces’ semifinals series. If Las Vegas’ star talent doesn’t at least match Seattle’s, they’re going to have problems.

As a team, Las Vegas’ biggest advantage will be its physicality — on the glass and at the free-throw line. The Aces led the WNBA in defensive rebounding percentage during the regular season and they were second to none at both getting to the foul line and keeping their opponents away from it. In doing so, Las Vegas got the most out of its own offensive possessions and limited what opponents could do with theirs — two enormous factors against a Seattle team that ranked first in the WNBA in both offense and defense.

Jackie Young has shown improvement in her second year in the WNBA but the former No. 1 overall draft pick has struggled in the 2020 postseason, shooting just 30.6 percent from the field and losing major minutes to Robinson. A 6-foot-0 guard who would much rather drive to the rim than shoot long jumpers, Young will need to assert herself physically against the smaller Seattle backcourt. Chances are high the Storm will dare her to shoot, so Young will have to pick her spots wisely and punish her opponent when she gets to them.

The Storm entered the 2020 season as the favorites to win the WNBA Finals and so far they haven’t disappointed. Whereas most other contending teams were somewhat handicapped by the absences of star players, Seattle actually got stronger relative to 2019 after returning from injury Breanna Stewart, the 2018 MVP, and Sue Bird — whom many consider to be the greatest point guard in league history.

As such, it was unsurprising to see Seattle coast through the regular season. Even as Stewart and Bird dealt with nagging injuries that kept them out for stretches, the Storm’s depth, versatility and athleticism on defense allowed them to remain at the top of the standings and avoid taking chances with the health of their stars to ensure their readiness when the team needs them most.

That time is now, and the Storm look as intimidating as they have all year. Seattle survived a Game 1 semifinals scare from the Minnesota Lynx before winning by comfortable margins in Games 2 and 3 for the series sweep. Now, they are one step closer to winning a franchise-fourth WNBA championship.

Sue Bird, PG: Bird has shot just 35.5 percent from the field in the postseason, but she has averaged 7.3 assists per game — her highest postseason average since the Storm won it all in 2010. She did not play in either of the Storm’s regular-season games against the Aces due to knee soreness.

Jewell Loyd, SG: Loyd got off to a hot start this postseason, scoring 45 points in her first two games, but back tightness limited her in Game 3 of the semifinals. She shot just 1-of-11 from the field in the Storm’s first regular-season meeting against the Aces and was spectacular in the second, with 30 points and four assists.

Alysha Clark, SF: Clark was her usual efficient self in the semifinals, making 55 percent of her shots from the field and rarely turning the ball over. She was among the brightest spots for the Storm in their regular-season series against the Aces, scoring a total of 27 points on 10-of-16 (62.5 percent) shooting. The impact she makes on defense, however, is so fierce it earned her a 2020 WNBA All-Defense Team honor, by unanimous vote.

Breanna Stewart, PF: Stewart struggled with her shot in the first two games of the semifinals, shooting just 11-of-33 (33 percent) from the field but dominated in Game 3 with 31 points, seven assists, six rebounds, three steals and two blocked shots. She scored 29 points and grabbed 18 rebounds in her lone regular-season game against the Aces; she sat out the second meeting between the two teams.

Natasha Howard, C: Howard’s up-and-down 2020 has continued in the postseason, with the 2019 Defensive Player of the Year struggling to stay on the floor due to foul trouble. She was decent in the Storm’s first regular-season game against the Aces, scoring 16 points, grabbing nine rebounds and recording three steals. She was significantly less productive in the latter game.

Having Stewart and Bird back in the starting lineup gives Seattle star power and unmatched depth by principle of starting-caliber players moving into reserve roles. Jordin Canada, Sami Whitcomb (who will miss the Finals to be with her wife, who is expecting the couple’s first child), Mercedes Russell and Ezi Magbegor highlight a buzz saw of a bench unit — one that has proven capable of more than just giving its starting counterparts time to rest.

Ultimately, the Storm’s depth means they’ll probably be less reliant on any one player than the Aces but it would still make their lives a lot easier if they got Stewart at her best. Wilson is certainly an imposing matchup, and it wouldn’t be surprising to see at least one game in this series come down to a duel between the two forwards; if Stewart wins the one-on-one battle, it would bode well for Seattle.

Backup point guard Jordin Canada is one of the quickest backcourt players in the league and one of the best defensive playmakers. Canada’s quick hands and willingness to gamble for steals make her incredibly disruptive, and she’s a one-woman fast break with the ball in her hands. However, she is not at all a threat from outside, so the Storm will need Canada to balance her aggressive defense with smart offense and keep the basketball moving.

How to watch: ABC, SN

How to watch: ABC, SN