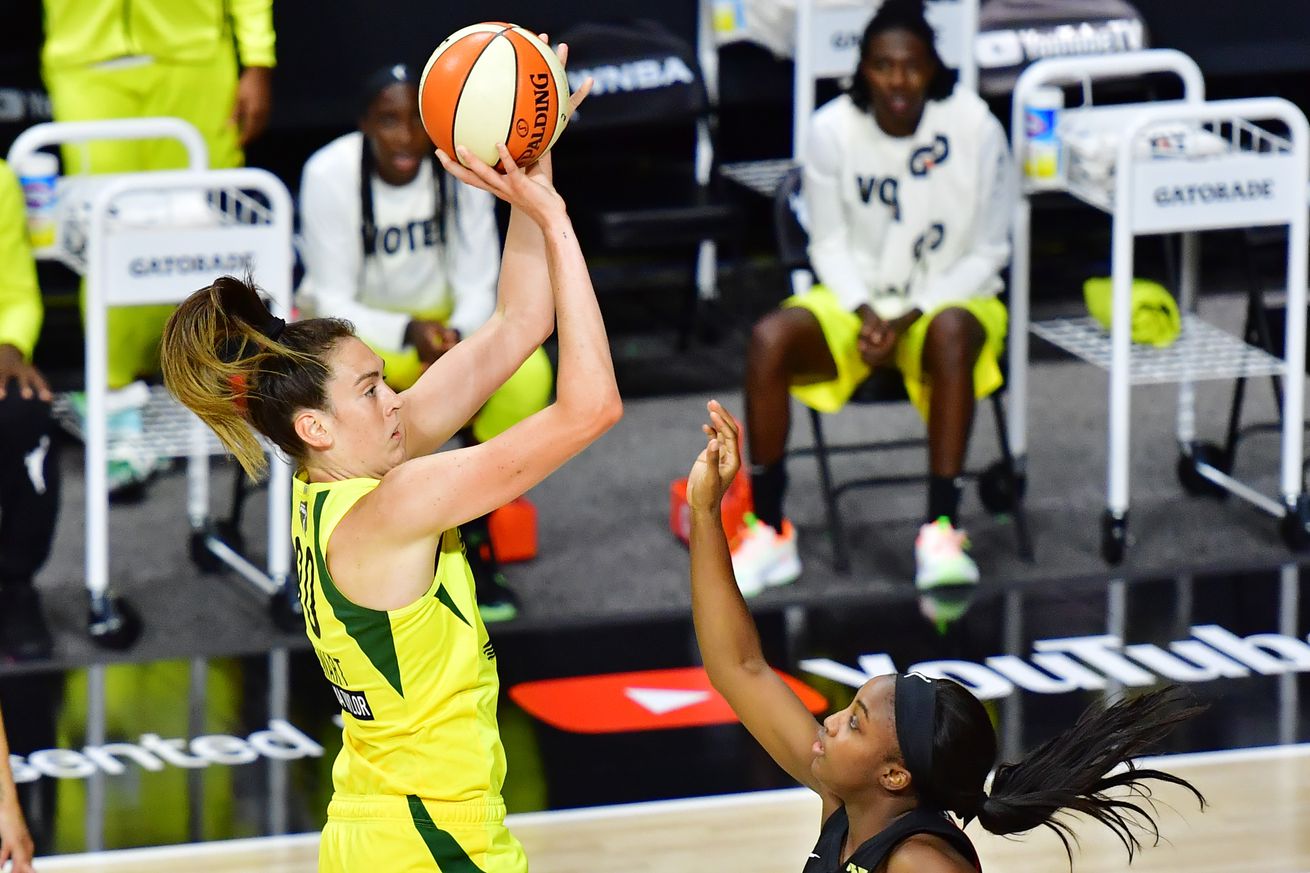 The Seattle Storm were firing on all cylinders in their 93-80 win over the Las Vegas Aces. Breanna Stewart, Jewell Loyd and Sue Bird had big games while the Storm’s defense shut down the Aces.

Breanna Stewart’s 37-point, 15-rebound performance helped the Seattle Storm earn a 93-80 win over the Las Vegas Aces in Game 1 of the WNBA Finals on Friday night at IMG Academy in Bradenton, Florida. Stewart’s performance marks the fourth time a player has recorded at least 30 points with 15 rebounds in a playoff game and her 37 points were just one point off from the WNBA Finals scoring record.

The Aces were just 13-of-44 in the first half and the Storm were able to open up a 17-point halftime lead. The Storm’s largest lead came early in the third quarter at 59-40 but the Aces closed out the quarter on a 24-8 run and the Storm led by just two heading into the final period. Stewart scored the first 11 points of the quarter and Seattle did not look back the rest of the game.

The Storm prioritized stopping the Aces in the 2-point area and it paid off. The Aces were 17-of-56 on 2-point shots. The Storm were willing to concede 3-point shots and that led to frustrating possessions for the Aces.

It can be really hard to score inside on the Storm. pic.twitter.com/ivxYeC1TKG

Surprisingly, the Aces were 10-of-21 from beyond the arc. Angel McCoughtry was 5-of-6 from deep and finished with a team-high 20 points.

Jewell Loyd was a big factor for the Storm, scoring a playoff-career-high 28 points. This marks the second time a pair of teammates have scored 28-plus points in playoff history. The first time occurred in the 2018 WNBA Finals when Stewart and Natasha Howard combined for 59 points as the Storm clinched their championship. Sue Bird scored just two points put recorded a playoff-record 16 assists.

Howard did not score a lot (just six points) but did record four rebounds and three blocks while guarding Las Vegas superstar A’ja Wilson on most possessions. Although Wilson scored 19 points, she was 6-of-20 from the floor.

The Aces should not be as unlucky on their shots inside the paint in Game 2 but they will have to make some adjustments to slow down Breanna Stewart and Jewell Loyd. The Storm seemed to settle on shots from beyond the arc in the third quarter, missing all of them, and that played into the Aces making their comeback. Game 2 is on Sunday, Oct. 4 at 3 p.m. ET on ABC.