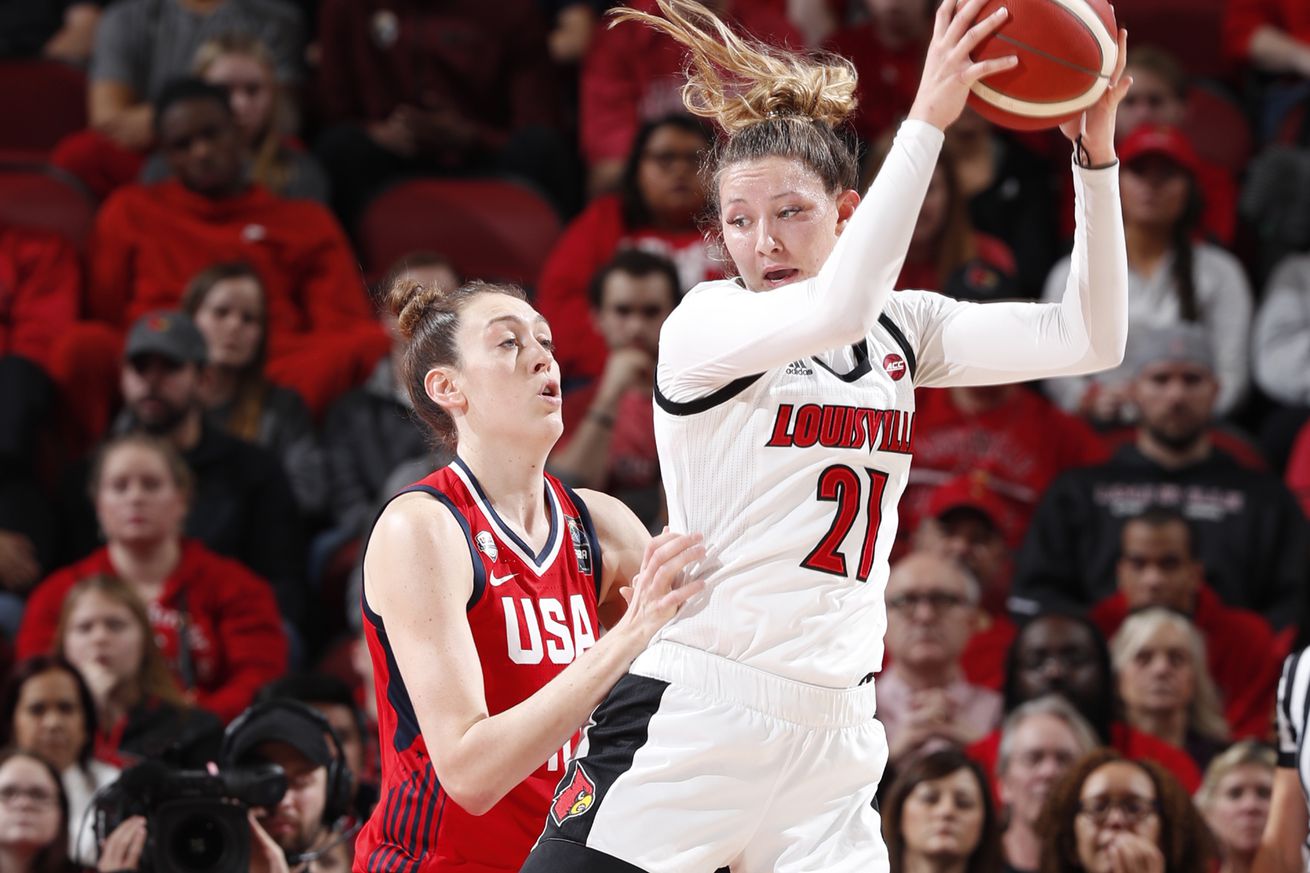 Kylee Shook (right) was just one of the several players whose draft selection greatly exceeded projection. | Photo by Jeff Reinking/NBAE via Getty Images

The 2020 WNBA Draft proceeded as expected for the first handful of picks but flew off the rails shortly after that. The New York Liberty were the main culprits of this unpredictability, while the Dallas Wings played it safer.

The 2020 WNBA Draft has come and gone, and we’ve had a few days to digest what happened in what was one of the more interesting drafts in recent memory — and that’s not even a reference to its virtual presentation.

Some things made sense from the get-go. Everyone knew, for example, who the New York Liberty would take at No. 1: Sabrina Ionescu. Other teams, such as the Chicago Sky and Dallas Wings, played with the hands they were dealt, drafting players who both filled immediate needs and played into those respective teams’ futures.

It’s somewhat amusing, though, that after making the easiest call of the night, it would be the Liberty to later cause the most chaos. New York’s selections throughout the late first round and early second round left more than a few people scratching their heads, especially after the team recently jettisoned a perennial All-Star.

As with any draft, much of the activity makes more sense in hindsight. But are there still a few things that we still can’t wrap our heads around? Sure. Here are some of the 2020 WNBA Draft’s biggest surprises — as well as a few developments that weren’t surprising in the least.

The Liberty selecting Ionescu No. 1 overall wasn’t exactly shocking. For the remainder of the draft, though, New York threw curve ball after curve ball, passing up bigger names like Beatrice Mompremier and Te’a Cooper in favor of less-hyped players like Jazmine Jones and Kylee Shook. In the wake of trading franchise pillar Tina Charles, one might have expected the Liberty to seek a post player as soon as possible. Yet, it took them until their fourth pick (Shook) to choose such a player.

With a new home in Brooklyn, a new head coach in Walt Hopkins and a new franchise player in Ionescu, the Liberty seem to be extending their overhaul to their on-court product. We don’t know yet what Hopkins sees in Jones and Shook, who were role players (albeit excellent ones) at Louisville. The picks themselves, however, make clear what the Liberty have been hinting at: Things are changing for one of the WNBA’s premier franchises, one that’s not afraid to take a few risks.

Mikiah Herbert Harrigan drafted at No. 6

We knew Mikiah Herbert Harrigan’s strong senior campaign had raised her draft stock considerably but the Lynx choosing her No. 6 overall was still a tad surprising, given the team’s needs elsewhere. Incidentally, Cheryl Reeve was able to fill one of those needs in the second round when she drafted point guard Crystal Dangerfield at No. 16.

With the Liberty owning five of the draft’s first fifteen picks, it seemed likely they would try to consolidate some of them and move up. That never happened. In fact, no trades were made at all during the draft. New York did make a pair of moves afterwards, trading Shatori Walker-Kimbrough to Phoenix for the rights to Jocelyn Willoughby and Erica Ogwumike to Minnesota for Stephanie Talbot.

Those rooting for a chaotic shakeup of the boards were left disappointed.

Beatrice Mompremier falls to No. 20

Projected by many to be a first-round pick, Mompremier was on the board longer than expected. The Los Angeles Sparks finally scooped Mompremier up in the second round, but not before forwards Shook, Leaonna Odom, Brittany Brewer and Joyner Holmes were drafted ahead of her. One can’t help but wonder if WNBA evaluators simply weren’t as high on her potential as we were led to believe.

What didn’t surprise us

This seemed pretty clear-cut. Ionescu and Satou Sabally going to New York and Dallas, respectively, were foregone conclusions. While a case could have been made for the Indiana Fever to select Chennedy Carter over Lauren Cox, the players chosen with the draft’s first four picks were easy calls.

The Dallas Wings’ other first-round picks

Arike Ogunbowale had a tremendous rookie season in 2019, though she was playing out of position for most of it. We figured the Wings would look to add a game-managing type of point guard to flank Ogunbowale, and they did just that with Tyasha Harris. The Wings’ pick of Bella Alarie makes a lot of sense as well. A stretch big is a valued commodity in today’s era of basketball, especially for teams with dribble penetrators of Ogunbowale’s caliber.

There will be plenty of open looks for Alarie in Dallas.

The Chicago Sky drafting a forward

Chicago’s frontcourt was looking a bit thin entering the draft, with both Jantel Lavender and Azurá Stevens recovering from serious foot injuries and the group lacking a consistent paint finisher. A post player seemed like a logical choice at No. 8, and the Sky got exactly who they wanted in Ruthy Hebard. Hebard is no stranger to playing with elite point guards, so she should find her niche alongside Courtney Vandersloot very quickly.

Kitija Laksa might not have been everyone’s expected choice for the Seattle Storm at No. 11 but the pick makes a lot of sense. Assuming both Sue Bird and Breanna Stewart return healthy for 2020, the Storm don’t really need much. Per High Post Hoops’ WNBA salary database, Seattle was essentially capped out before the draft even started.

In drafting Laksa, the Storm can safely “stash” her until a later date.