A ‘Dream Team’ in Atlanta? Courtney Williams ups the ante in the ATL 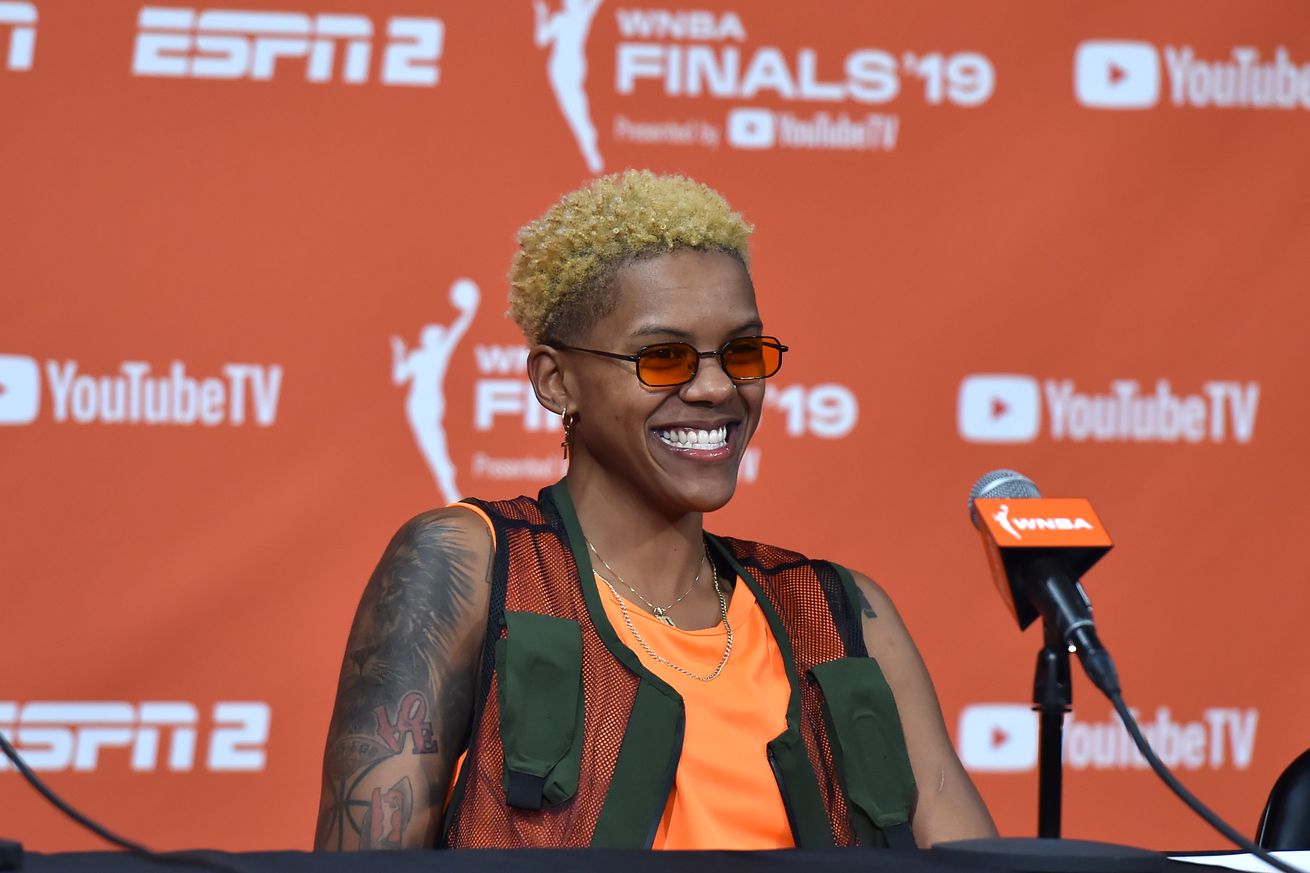 The Atlanta Dream continue their quest to create a “Dream Team” of their own by acquiring Courtney Williams from the Connecticut Sun in a three-team trade with the Sun and Phoenix Mercury. Williams’ arrival in Atlanta follows those of Kalani Brown, Glory Johnson, Shekinna Stricklen and Alexis Jones.

The 2019 season was a disaster for the Atlanta Dream. After a successful 2018 season inspired excitement in a difficult Atlanta market and Nicki Collen being named Coach of the Year, the combination of injuries and inefficiencies made the Dream a desultory, disappointing drag the following year.

Through a flurry of offseason moves, however, Collen and president Chris Sienko have flipped the script. Entering the 2020 WNBA season, the Dream just might be the league’s most intriguing team.

Courtney Williams, who Atlanta acquired on Wednesday as part of a three-team trade with the Connecticut Sun and Phoenix Mercury, encapsulates the the high-upside swagger that now defines the Dream.

As part of the trade, Atlanta sent Jessica Breland and Nia Coffey to Phoenix, while Phoenix sent the No. 17 pick in 2020 WNBA Draft to Atlanta. Connecticut received Briann January and a 2021 second-round pick from Phoenix.

The unabashed Williams is an über-athlete who should invigorate a Dream offense that stagnated lasted year, frequently struggling with the most basic objective of basketball — scoring the ball. While Williams became well-known for her midrange game over her nearly four seasons in Connecticut, she also developed into a three-level scorer. In addition to her ability to elevate in the midrange to sink a jumper, she used her speed and shiftiness to get to the hoop.

The addition of Courtney Williams brings us a dynamic scorer who thrives in the big moment. Courtney is arguably the best mid-range scorer in the WNBA but has also become a very efficient 3-point shooter which will keep defenses honest. While one of the smaller players in the league, she attacks the boards at both ends of the floor fearlessly and effectively.

In Atlanta, Williams will form a potent partnership with Tiffany Hayes. One of the league’s best isolation scorers, Hayes was uneven last season, with many of the Dream’s shooting woes resulting from her frequently driving into an overcrowded lane. The presence of Williams will prevent defenses from devoting the bulk of their attention to Hayes, just as Hayes’ presence will allow Williams to attack. It may take some time for the two to form a rhythm, but the pair is too talented, and too athletic, not to test and trouble defenses.

During the 2019 season, the Dream hoisted 22 3-pointers per game, the second-most per game in the league. Yet, they converted a league-worst 29 percent. In and of herself, Stricklen should solve Atlanta’s shooting and spacing issues.

A career 37.5-percent 3-point shooter, Stricklen began her career with the Seattle Storm, playing three seasons in the Pacific Northwest before crossing the country to join the Connecticut Sun. Over her five seasons in Uncasville, Conn., Stricklen increasingly weaponized her ability to drain it from distance. Last year, she upped her 3-point attempts to nearly six per game, supercharging the Sun offense by spacing the floor. In winning the 2019 WNBA 3-Point Contest, Stricklen also displayed her ability to quickly and accurately fire from deep.

Collen highlighted the appeal of her shooting prowess in a statement from the team, noting:

When we ended last season we knew we had to prioritize shooting during this free agency period. What we are getting in Shekinna Stricklen is an incredible shooter with size that can make shots on the move or standstill, and also has a great understanding of how to get herself open shots.

In coming to Atlanta, Stricklen will reunite with former college teammate Glory Johnson. Last Thursday, Johnson signed with the Dream as an unrestricted free after spending all seven years of her WNBA career with the Dallas Wings organization.

In contrast to Stricklen, Johnson does not have the reputation as a 3-point markswoman. However, Johnson began to transform into a stretch big last season. She took a career-high 3.7 attempts from 3-point range per game, converting them at a career-high 34-percent rate. Additional evidence of Johnson’s shift from the paint to the perimeter: She scored 51 percent of her points from behind the arc and 24.5 percent in the paint for the Wings in 2019. In 2018, only 21.9 percent of her points came from 3-pointers and 42.9 percent were scored in the paint.

Upon announcement of her addition, Collen emphasized the attractiveness of Johnson’s expanding game:

She came into this league as an incredible athlete who scored mainly around the basketball but has added a consistent 3-point shot. Her ability to rebound, handle the ball, and defend multiple positions gives us a versatile weapon to utilize in a variety of fun ways.

On Tuesday, the Dream added another shooter, Alexis Jones, who was claimed off waivers. Jones spent last season with the Los Angeles Sparks after playing for the Minnesota Lynx during her first two seasons in the league. In both stops, Jones struggled to establish herself as a consistent contributor. Yet, the decision to almost immediately claim Jones suggests the Dream see her as a potential long-term piece.

The Dream certainly saw something they liked in Kalani Brown, Jones’ former teammate both in Los Angeles and at Baylor.

In 2019, Atlanta’s struggles from behind the arc were matched by struggles in the paint. Only 37.4 percent of their average of 71.2 points per game came inside. These stats are not entirely unsurprising: The Dream’s primary bigs, Elizabeth Williams and the now-departed Jessica Breland, were defense-first players and not equipped to be more than a complementary offensive option. Before the 2019 season, the Dream sought to make their big rotation more offensively dynamic by acquiring Marie Gülich from the Phoenix Mercury to serve as a stretch big. Yet, Gülich’s shot eluded her in Atlanta. The Dream thus entered the offseason still searching for a big who could be an offensive force.

On the first day of the free agency signing period, Atlanta sent Gülich, along with Brittney Sykes, to Los Angeles in exchange for Brown, the seventh pick in the 2019 WNBA Draft by the Sparks.

On a Los Angeles squad teeming with bigs, Brown did not receive consistent opportunity during her rookie season but flashed her offensive potential despite limited minutes. At 6’7’’, Brown possesses the size needed to play with power in the paint, and her quickness and soft touch on her jumper make her a multidimensional offensive threat. Brown can score from the midrange, and, possibly, from behind the arc.

While Kalani’s size is important on the boards and around the rim, she also has the ability to consistently step outside the lane and hit the face-up shot. In a league full of exceptional centers, we believe we have added a player who has all the tools to be very successful in our system.

Brown turned in one of her best games of her rookie season against the Dream last year — allowing Collen to see Brown’s potential up close. Brown scored 12 points in 20 minutes on 6-of-10 shooting in that game. Brown showed similar offensive efficiency in the WNBA offseason. Before the Women’s Chinese Basketball Association paused the season due to the Coronavirus outbreak, Brown was averaging 24.8 points per game for the Xinjiang Magic Deer on 67.8 percent shooting.

Due to the additions of Brown, Jones, Johnson, Stricklen and Williams, the refreshing of the Atlanta Dream will extend beyond their new uniforms and new arena. Five new players who bring flash, fire, ferocity and frequent scoring from all over the floor should invigorate the W in the ATL.