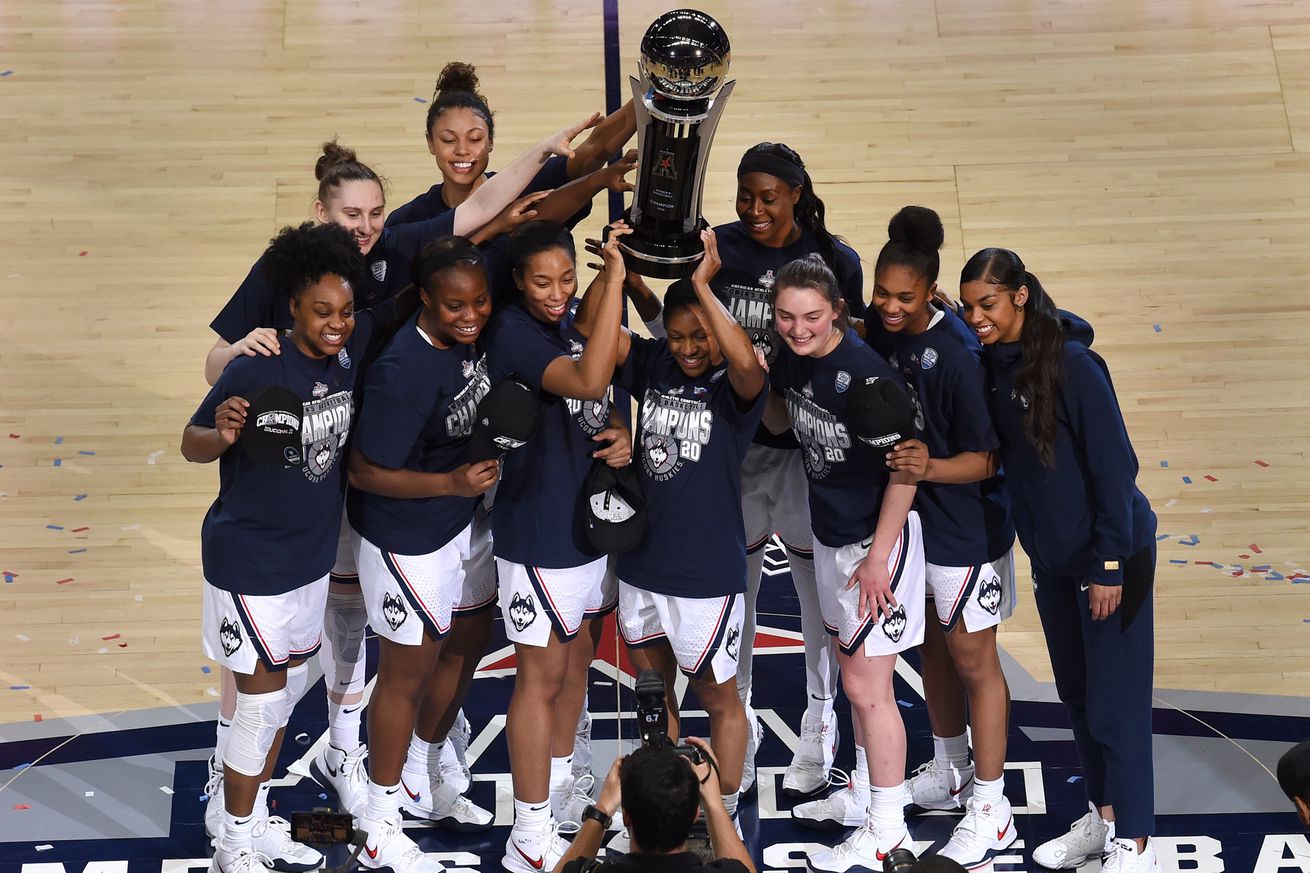 The UConn Huskies — currently ranked No. 5 by the Associated Press — capped their seven-year run in the AAC with a seventh-straight AAC Tournament championship. In Monday night’s final, they finished off the Cincinnati Bearcats with an 87-53.

Throughout the 2020 AAC Tournament, the UConn Huskies asserted their authority and obliterated all opponents on their way to capturing their seventh-straight AAC Tournament championship.

In Monday night’s final, the Huskies’ 87-53 victory over the Cincinnati Bearcats completed their seven-year tenure in the AAC with an undefeated 139-0 resume. It is an absurd feat of conference dominance that is likely to go unmatched.

Megan Walker was integral to Monday night’s win over the Bearcats and earned the Most Outstanding Player honor for her efforts. Teammates Crystal Dangerfield, Christyn Williams and Aubrey Griffin join her on the All-AAC Tournament Team.

Most importantly, head coach Geno Auriemma may have his team peaking at just right the time. Even against unexceptional opponents, UConn’s total tournament performance inspires confidence in their potential to vie for a national title.

In their quarterfinal contest on Saturday afternoon, the Huskies started slow before gaining separation and squashing the eight-seed Temple Owls, 94-61. Crystal Dangerfield captained the Huskies’ effort, using a 6-of-9 performance on 3-pointers to propel herself to a game-high 22 points. Aubrey Griffin also impressed, using her incessant energy to not only grab 16 rebounds and snag three steals but earn 17 free throw attempts as well. Her 11 free throw makes contributed to her 15 total points.

In their semifinals matchup against the four-seed South Florida Bulls Sunday afternoon, UConn wasted little time in taking care of business on both ends of the floor and cruised to a 79-38 victory.

In Monday night’s final, it was never in doubt that UConn would complete its tournament demolition. While the three-seed Cincinnati Bearcats hung with the Huskies for the first period, the Huskies dialed in their defense and unleashed their offense in the second. Their intensity would not wane over the course of their 87-53 victory.

With her 26-point performance, Megan Walker locked up the AAC Tournament Most Outstanding Player honor.

Christyn Williams showed out as well in the title game, compiling 22 points, eight rebounds and two steals. Williams joined Walker on the AAC All-Tournament Team, as did Crystal Dangerfield and Aubrey Griffin.

Dangerfield was her steady self in the final, with 15 points and eight rebounds. Griffin was limited to only 11 minutes of action but tallied seven boards. Her inclusion on the All-Tournament Team is a testament to how the freshman has begun to translate her intangible energy into tangible, quantifiable effectiveness. Her ability to pester and produce makes her a valuable weapon.

Is a Final Four run in order for the Huskies?

In short, don’t count the Huskies out of the Big Dance.

Nonetheless, if UConn can combine the efficient scoring of Walker and Dangerfield with the positive, propulsive activity of Griffin, Williams and Nelson-Ododa — in addition to some timely buckets and dimes from Anna Makurat — the folks in Storrs may be celebrating a (seemingly) long-awaited return to the Final Four.

The Huskies will be without a potential contributor, though. In UConn’s semifinal win over South Florida, Kyla Irwin fractured her left elbow and is done for the season. Although her playing time had decreased over the course of the season, Irwin started 18 games, averaging just over three points and more than two rebounds. Her absence eliminates a trusted, experienced leader from Auriemma’s already tight rotation.

Outside of UConn’s exhibitions of excellence, the AAC Tournament offered little excitement, with mostly favored teams winning in easy and uneventful fashion.

In the early rounds, the only game that generated some thrills was Friday night’s final contest, when the 11-seed Memphis Tigers upset the six-seed Southern Methodist Mustangs 76-65. Memphis freshman Madison Griggs swished seven 3-pointers on her way to 24 points, the most ever scored by a freshman in the AAC Tournament. However, Griggs and the Tigers could not carry this scoring momentum to their quarterfinal contest with the Bearcats, falling 94-52.

The Bearcats, however, kept their momentum and bested the two-seed Central Florida Golden Knights 57-51 to advance to the tournament championship game for the first time.

Check out some of our highlights from last nights thrilling 57-51 win over the #2 seeded UCF to advance to the Finals of the @American_WBB
Championship game for the first time in program history!#Bearcats pic.twitter.com/IOM0sOlEPi

The Cincinnati-Central semifinal matchup did much to make up the tournament’s missing intensity.

After trailing by 11 points at halftime, Cincinnati came out of halftime with renewed physicality and focus on offense and defense. Ilmar’I Thomas powered the Bearcats with 21 points on 70-percent shooting. She also claimed eight rebounds, three blocks and a steal. Angel Rizor also was clutch, netting 13 points and grabbing nine rebounds.

In the final, head coach Michelle Clark-Heard called on Thomas and Rizor to carry Cincinnati, with each totaling 38 minutes of action. Yet, effort was not enough against UConn. Thomas struggled to 14 points on 13 shots and managed only five rebounds. Rizor was more effective, registering 16 points and nine rebounds. Even though they were unable to keep the Bearcats competitive in the final, both Thomas and Rizor were rewarded for an overall admirable tournament, earning spots the AAC All-Tournament Team.