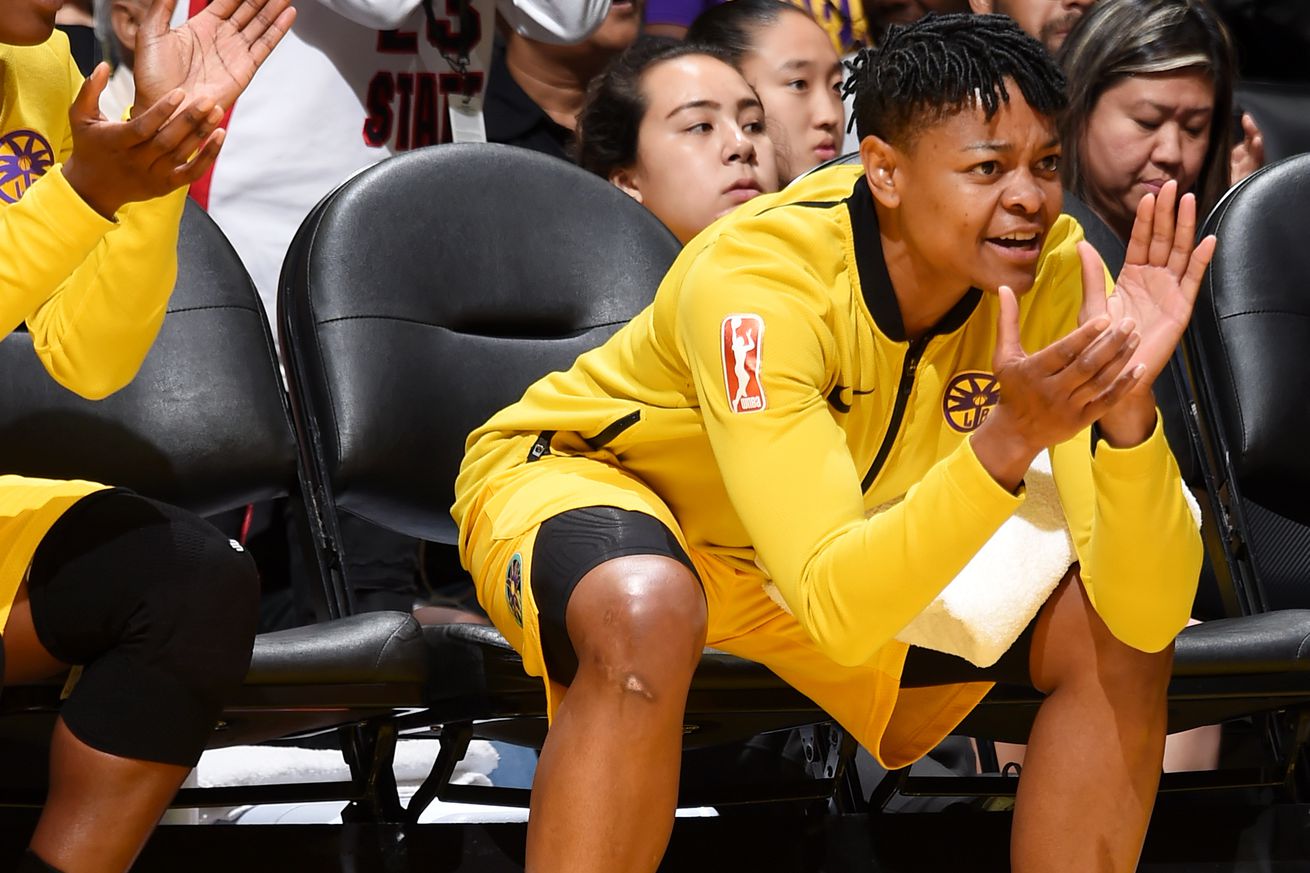 As an exemplification of her status as an all-time defender, Alana Beard gets down in a defensive stance from the bench during the 2019 WNBA season. | Photo by Adam Pantozzi/NBAE via Getty Images

After 15 years in the WNBA with the Washington Mystics and Los Angeles Sparks, Alana Beard announced her retirement. She anchored the Sparks’ defense in recent seasons, twice winning the WNBA Defensive Player of the Year award in consecutive years. Who will the Sparks tap to attempt to fill her shoes?

Beard, who announced her retirement from the WNBA last week, defined what it meant to be an elite defender in the modern WNBA. With her combination of athleticism, anticipation and intelligence, she consistently stymied the league’s top perimeter scorers.

Over the course of her 15-year career, with six seasons as a Washington Mystic and eight as a Los Angeles Spark, Beard made eight All-Defensive Teams. In 2017 and 2018, she was named Defensive Player of the Year. Entering the 2019 WNBA season, league executives maintained an expectation of impact and excellence from Beard. WNBA general managers voted her the “best on-ball defender in the WNBA” and “best perimeter defender in the WNBA.”

Despite her commitment to maintaining peak condition, though, Beard’s body betrayed her. At age 37 during the 2019 season, she was active for only 16 of the Sparks’ 34 regular-season games, averaging under 15 minutes per contest. Nonetheless, if she had decided to give it one more season, it is easy to imagine that league executives, as well as her opponents, would still expect nothing less from her than defensive force.

While Beard’s defense will be her legacy, her career is also a testament to flexibility, malleability and humility.

The Shreveport, Louisiana, native joined Gail Goestenkors’s Duke University program in 2000. During her four years in Durham, Beard put the Blue Devils on the precipice of powerhouse status. Duke not only dominated the ACC during her tenure but also reached a pair of Final Fours. Beard powered the Blue Devils by unleashing her multidimensional talent, becoming the first NCAA basketball player to tally more than 2,600 points, 500 assists and 400 steals over a career.

Alana Beard announces her retirement after 15 seasons in the WNBA:

In short, she was much more than a defensive specialist.

Soon after she arrived in the WNBA as the second-overall selection by the Washington Mystics in the 2004 WNBA Draft, she would establish herself as a go-to offensive talent. During her time in D.C., Beard earned All-Star selections in 2005, 2006, 2007 and 2009. In 2006, she was named to the All-WNBA Second-Team.

Injuries then stalled Beard’s ascendance. Before the 2010 WNBA season, she suffered a season-ending and career-threatening ankle injury. She then missed the entire 2011 season with a foot injury.

In 2012, Beard returned to the WNBA, joining the Los Angeles Sparks. In L.A., she had to re-acclimate herself to the rigors of competitive basketball while also retooling her game. The injuries had stolen her signature quickness. Recalling this difficult return to the court in a 2018 conversation with The Athletic, Beard emphasized:

I had a choice to either take that personally or figure out another way to get myself back into this game. I questioned everything about what I was doing. I questioned my competitive spirit, my offensive game. Every day was challenging.

But Beard was up to it. She quickly became an integral part of a Sparks team that consistently contended for the WNBA crown. No longer an explosive scorer, she learned how to complement the likes of Candace Parker, Kristi Toliver, Nneka Ogwumike and Chelsea Gray. On the other end of the floor, she made herself into one of the best of all time.

She still possessed the ability to make the big shot when needed.

Highlight: Big-shot Beard in Game 1 of the 2016 WNBA Finals

Even as she collected accolades and claimed a title, Beard became an exemplar of entrepreneurial spirit off the court, a trait that increasingly has characterized contemporary WNBA players.

In 2016, soon after winning the WNBA title, she, in partnership with Marissa Coleman, opened a Mellow Mushroom franchise in Roanoke, Virginia. Beard long has insisted that her basketball ability did not preclude her from possessing business ambitions. Rather, she believed her basketball experience enhanced her business acumen.

Running a business is like being a leader of a team. At some point in our life/career we were/are all leaders, it’s imperative to apply that asset when deciding life after basketball. There are companies within the corporate world that wish they knew how to build, sustain and lead a team as well as we do! Use that to your advantage!

Beard has been proactive in further developing and deepening her off-court resume. During the 2016 Olympic break, she learned to code. In 2018, she participated in Harvard Business School’s Crossover Into Business program. Last offseason, she interned at Next Play Capital, a venture capital firm in Silicon Valley.

Currently, she is serving as a women’s college basketball commentator for ACC Network.

Beard is also a mom. As she put it on Instagram, she is #takinghertalentstomommyhood.

Tierra Ruffin-Pratt proved a reliable replacement for Beard in 2019, serving as a sturdy defender. On the offensive end of the floor, however, Ruffin-Pratt’s shortcomings are just as severe as those of late-career Beard. While Ruffin-Pratt did increase her 3-point attempts and percentages in 2019, her lingering hesitancy from long range cramped the offense for the oversized Sparks. If they can retain Ruffin-Pratt — an unrestricted free agent on another bargain deal (she made only $56,375 in 2019) — the still-yet-to-be-determined general manager of the Sparks should not hesitate to do so.

Alternatively, maybe the Sparks should not try to replace Beard but instead find a serviceable wing defender who can also serve as an offensive threat.

In this effort, L.A. will benefit from the increased 2020 WNBA salary cap. According to High Post Hoops’ salary database, the Sparks have $719,283 already committed for the 2020 season. Expect restricted free agent Chelsea Gray, to whom the Sparks reportedly have extended a qualifying offer, to receive a max or near-max contract offer of $215,000. Even then, LA.’.s future general manager will have about $365,000 to work with, enough to add two solid rotation guards or wings.

Tamera Young is an experienced unrestricted free agent the Sparks could target. Her intimate knowledge of the Las Vegas Aces, an emerging rival for the Sparks, could make her an especially advantageous addition. However, even as they have their eyes on a title run, it might behoove the Sparks to round out their roster with younger talent. The Washington Mystics will do all they can to retain Aerial Powers, but they have other unrestricted free agent priorities (Elena Delle Donne, Kristi Toliver, Emma Meesseman). This could allow L.A. to steal the ever-energetic Powers. Similarly, Natisha Hiedeman brings a brand of spunk on both ends of the floor that benefitted the Connecticut Sun and could benefit the Sparks. And although Betnijah Laney lacks explosive scoring ability, her defensive intensity and versatility could enhance L.A.

While Beard’s defense will be her legacy, her career is also a testament to flexibility, malleability and humility.

Would the already star-studded Sparks attempt to bring in another big name — maybe Angel McCoughtry? After suffering a knee injury that sidelined her for more than a year, McCoughtry’s effectiveness as an elite talent was in question. Her recent return to the court for Dynamo Kursk, however, inspires confidence.

Finally, the Sparks also have the resources to trade for wing depth. The organization appears invested in Maria Vadeeva and Kalani Brown, so it is hard to envision both players maximizing their talent in the City of Angels. But would the Sparks be willing to send Vadeeva or Brown to the Atlanta Dream for an athletic wing in Brittney Sykes?

For short the Sparks, there are options aplenty.

But none of those options are Alana Beard, who always has been much more than an option.

She possessed the attitudinal and emotional ingredients that make a collection of players into a team. Former teammate Nneka Ogwumike offers an apt summation of Beard:

You don’t come across a teammate like her often, if at all. She personifies sacrifice and the values and standards that we hold ourselves to. And she is the same on and off the court.