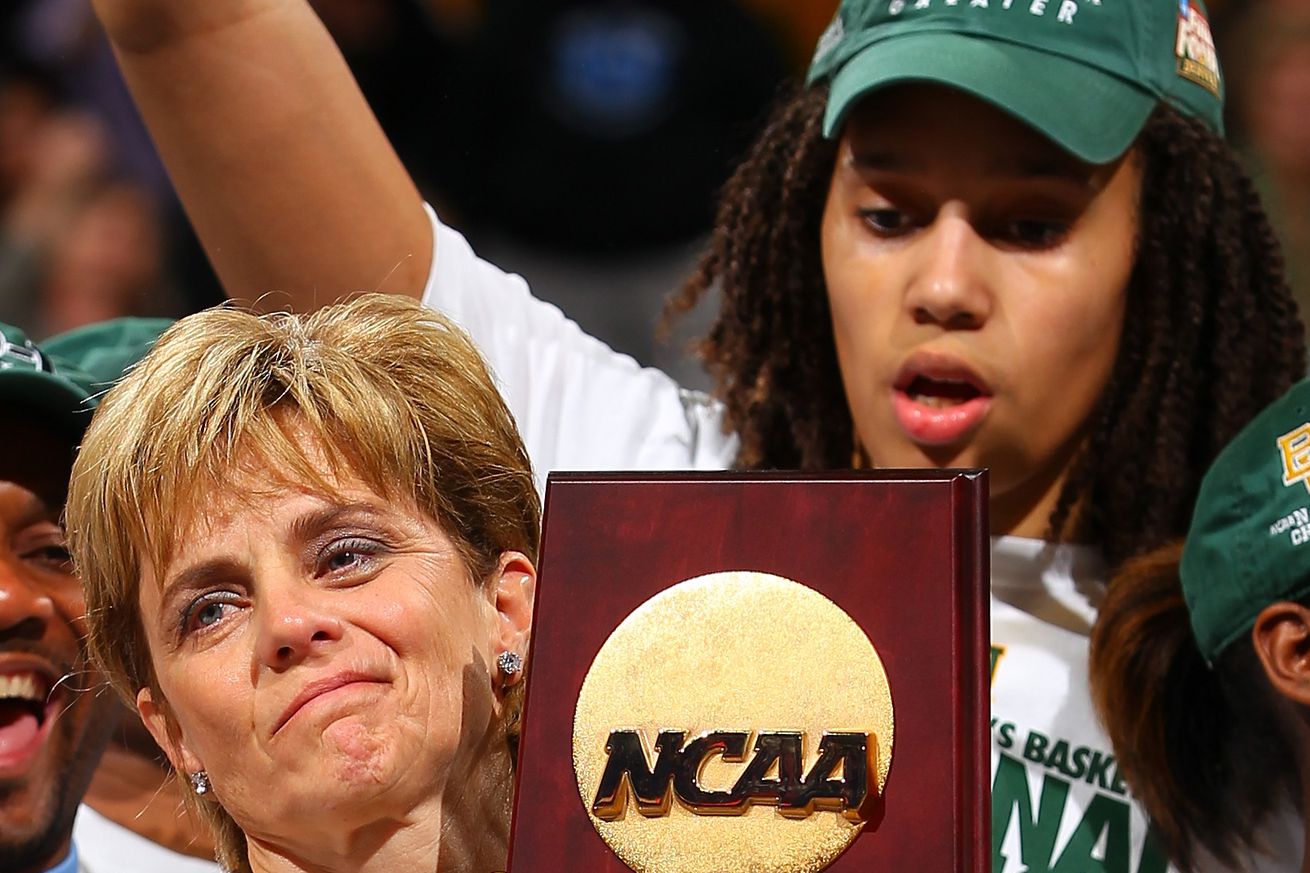 In winning three national titles in the past 15 years, the Baylor Lady Bears have produced some incredibly accomplished players. While the great Brittney Griner headlines the best of Baylor, which other players made our list of the best players in program history?

During the 20th century, the Baylor Lady Bears were an unremarkable women’s college basketball program. Even after Sonja Hogg, who had established Louisiana Tech as one of women’s basketball’s signature programs of the 1980s, took charge in Waco in 1994, the Lady Bears never earned an NCAA Tournament berth, topping out with a trip to the WNIT Finals in 1998.

In 2000, things changed when Kim Mulkey came to town.

Succeeding her longtime mentor in Hogg, Mulkey delivered a first-time NCCA Tournament appearance during her first season at the helm. Soon thereafter, Mulkey was well on her way to making Baylor into a women’s basketball powerhouse. Of course, Baylor would not have achieved such heights without a number of outstanding players.

While Mulkey’s social and political leanings may be at odds with an increasingly diverse and progressive population of young women athletes, her ability to coach winning basketball cannot be disputed.

Mulkey has won at least 20 games in each of her 20 seasons. She has taken Baylor to the national tournament 18 times and, if not for COVID-19, it would be 19 times in 20 seasons.

When Mulkey led the Lady Bears to their first national title in 2005, she became the fourth person, and first woman, to win a championship as a player and coach. Last season, she won her 600th career game, reaching this milestone faster than anyone before her. Overall, Mulkey has compiled a record of 604-100 — a winning percentage of .858.

Soon after she first took the court for Baylor in the 2009-10 season, Brittney Griner inspired a cascade of proclamations.

Women’s basketball legend Nancy Lieberman would tell the New York Times, “Nobody can do what she can do. Not Cheryl Miller. Not Lisa Leslie. Not Candace Parker. She plays like a guy. It’s a really beautiful thing to watch.” The irascible former Indiana men’s coach Bobby Knight, among others, compared her to Kareem Abdul-Jabbar.

It was impossible for Griner to live up to these absurd expectations. Nevertheless, during her four years as a Lady Bear, Griner was an absolute force to be reckoned with, putting together one of the most impressive statistical careers in women’s college basketball history.

Baylor tallied a record of 135-15 during Griner’s career — a winning percentage of .900. They won the Big 12 regular-season and tournament crowns three times (2011, 2012, 2013). In 2012, the Lady Bears finished a sparkling 40-0 and won the national championship, with Griner named the Final Four Most Outstanding Player.

Lauren Cox’s value might be most evident through her absence.

The Lady Bears appeared to be cruising to the 2019 national title, leading 62-50 in the third quarter over the Notre Dame Fighting Irish. Then, Cox injured her knee. Without their junior defensive anchor, Baylor struggled to contain Notre Dame. The Fighting Irish would twice tie the game in the final minute, until two crucial buckets from Chloe Jackson allowed the Lady Bears to escape with the 82-81 victory.

Baylor won it for Cox. But barely, because Cox was so important to the Lady Bears’ identity.

Throughout her time in Waco, Cox may not have put up spectacularly starry stats, yet she was an absolutely essential element to a winning team. That Cox and UConn’s Breanna Stewart are the only 21st-century women’s basketball players to total at least 1,500 points, 975 rebounds, 300 blocks and 300 assists is indicative of her unique well-roundedness.

A sampling of the awards she won also signals her status as an impact player.

Sophia Young’s basketball trajectory resembles that of her alma mater — from underwhelming to elite. So, it is appropriate that Young led Baylor to their first national title in 2005.

A native of the West Indies, Young did not begin playing basketball until she was a foreign-exchange high school student in Shreveport, Louisiana. It was only a connection to the Baylor staff that resulted in Mulkey giving Young consideration as a recruit.

Once she arrived in Waco in 2002, Young’s development was supercharged. Her junior year (2004-05), everything came together and Baylor capped off a 33-3 season and the national title, with Young winning the Final Four Most Outstanding Player award.

Yet, it wasn’t always easy. Baylor opened the 2004-05 season against LSU and quickly fell behind by 21 points. The Lady Bears, however, managed to cut the final margin to 71-70. The effort was indicative of the spirit of Young and her team. As Young would recall about the 2005 team:

Everybody just knew their roles. Obviously at the time, Baylor was not established, so they were probably just trying to find anyone they could. . . . We just had a bunch of people who loved the game and who were passionate about being part of a team. And that’s how a championship team is built.

In the 2005 Final Four, the Lady Bears met the Tigers. Once again, LSU established a healthy lead in the first half, appearing to put Baylor on the brink of elimination. But the Lady Bears, led by Young, rallied and turned up the pressure to tie the game at the half before hanging on for the 68-57 win. From there, Baylor and Young cruised to the title, defeating Michigan State 84-62 in the national championship game.

Young then closed out her collegiate career with a fantastic senior season (2005-06). Named Big 12 Player of the Year, Young earned All-American honors for the second-straight season. She also became one of only four players to score 2,000 points, grab 1,000 rebounds, toss 300 assists and snag 300 steals; the other three who attained these marks were Cheryl Miller, Chamique Holdsclaw and Tamika Catchings.

Winner of the Wade Trophy, Nancy Lieberman Award and Dawn Staley Award, 1x national champion, most assists and 3-point field goals in program history ... and so much more

The top-rated point guard in the class of 2010, Odyssey Sims lived up to lofty expectations throughout her four-year career at Baylor.

As a freshman (2010-11), Sims earned the starting point guard spot 10 games into the season. After that, she was on her way to winning Big 12 and National Freshman of the Year honors. As a sophomore (2011-12), she was a USBWA All-American as she served as Griner’s sidekick during their undefeated run to the national championship. Her junior season (2012-13), she was an unanimous All-American.

In her senior season (2013-14), Sims she showed she was not just the beneficiary of Griner’s excellence. On Sims’ persistence, Mulkey would later assert:

She hated to lose, that’s the best thing I can say about Odyssey. We all know her talent and her defense, what she did hawking the ball. But that kid, internally, hated to lose more than any kid I’ve coached. And if you hate to lose, you’re going to win a lot of basketball games.

Although not a graduate transfer, Mulkey’s most successful transferee has been Alexis Jones. After two seasons at Duke, where she was the 2013 ACC Tournament MVP and a member of the 2014 All-ACC Second Team before tearing her ACL midway through her sophomore season, Jones decided to return to her home state of Texas and suit up for the Lady Bears.

Once eligible and injury-free for the 2015-16 season, Jones made an instant impact, turning in an outstanding, award-winning junior season. By averaging 15 points per game, a number boosted by a sterling 43.5-percent performance from 3-point range, Jones earned the Big 12 Newcomer of the Year award and a spot on the All-Big 12 First Team. She also showed out in the 2016 Big 12 Tournament, winning the Big 12 Championship Most Outstanding Player award.

While a nagging knee injury somewhat limited Jones during her senior season (2016-17), she still served as a difference-making player. On her way to again claiming All-Big 12 First Team honors, she tallied only the second triple-double in Baylor history, posting 24 points, 12 rebounds and 10 assists, to help the Lady Bears best Oklahoma in January 2017.