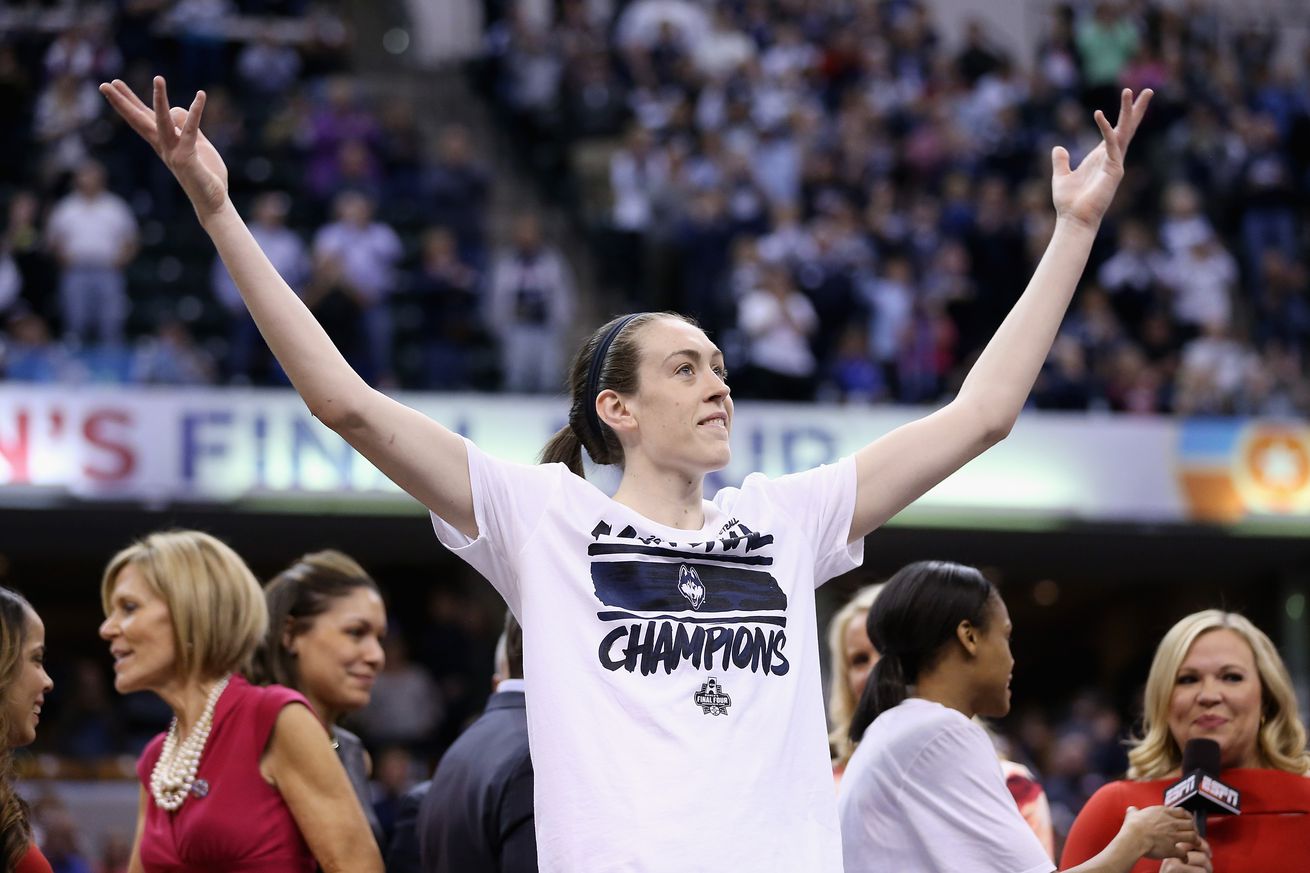 Breanna Stewart is the only player in history to win the Final Four Most Outstanding Player award four times. | Photo by Andy Lyons/Getty Images

The Connecticut basketball program has been consistently one of the best in the country. Which players made our list of the best players in program history?

Here’s the all-time starting five for the No. 5 Connecticut Huskies:

Bird was awarded the inaugural Nancy Lieberman award as a sophomore.

Sue Bird tore her ACL eight games into her freshman year and then went on to win three Big East regular-season and conference titles, reach the Final Four three times and win two national championships. Bird amassed a 114-4 record throughout her college career including a 39-0 season.

In her sophomore season, Bird was awarded the inaugural Nancy Lieberman award, given to the nation’s top point guard, and subsequently won the award in the next two seasons. As a senior, Bird won additional big individual awards: Player of the Year, Wade Trophy, Honda Sports Award, and Naismith Award.

Taurasi won both the Naismith Award and the Honda Sports Award as a junior and repeated for those honors as a senior.

Taurasi is one of eleven players in program history to score over 2,000 career points and she ranks ninth all-time in points scored. Additionally, she is second in assists, third in made 3-point shots and 13th in blocks.

Moore is the most prolific scorer in UConn history and ranks second in rebounds, fourth in steals and fourth in made 3-pointers.

Maya Moore helped the Huskies get back to the Final Four after Connecticut lost 13 games over three seasons and failed to advance past the Elite Eight. Moore was named the USBWA Freshman of the Year and Big East Player of the Year after leading her team in scoring with 17.8 points per game.

As a sophomore, Moore and the Huskies went 39-0 and she hauled in a bundle of individual hardware. In her junior season, the Huskies went undefeated once again with Moore winning her first Honda Sports Award and her second Final Four Most Outstanding Player honor. She added a third national title to her trophy case and before her four years were up, Moore earned the Naismith Award and the AP Player of the Year honor.

Moore finished her career with 3,036 points — the best in program history and 10th in NCAA history. Additionally, Moore is second in rebounds, fourth in steals, fourth in made 3-point shots, eighth in blocks and ninth in assists.

Stewart exited UConn with a 151-5 career record and ranked second in scoring, first in blocks and fifth in rebounding.

Stewart was 151-5 over her collegiate career and finished second in scoring, first in blocks and fifth in rebounding.

Charles is the all-time leading rebounder in UConn history and ranks fourth in scoring and fifth in rebounding.

Charles finished fourth in scoring, first in rebounds and fifth in blocks in program history.

Connecticut has 24 seasons of 30-plus wins in the 34 seasons Geno Auriemma has been the head coach. Additionally, Auriemma has six undefeated seasons and winning streaks of 111, 90 and 70 games. The streaks of 111 wins and 90 wins are the longest of any college basketball program in either the men’s or women’s competitions. He has 25 Final Four appearances and 11 national championships.