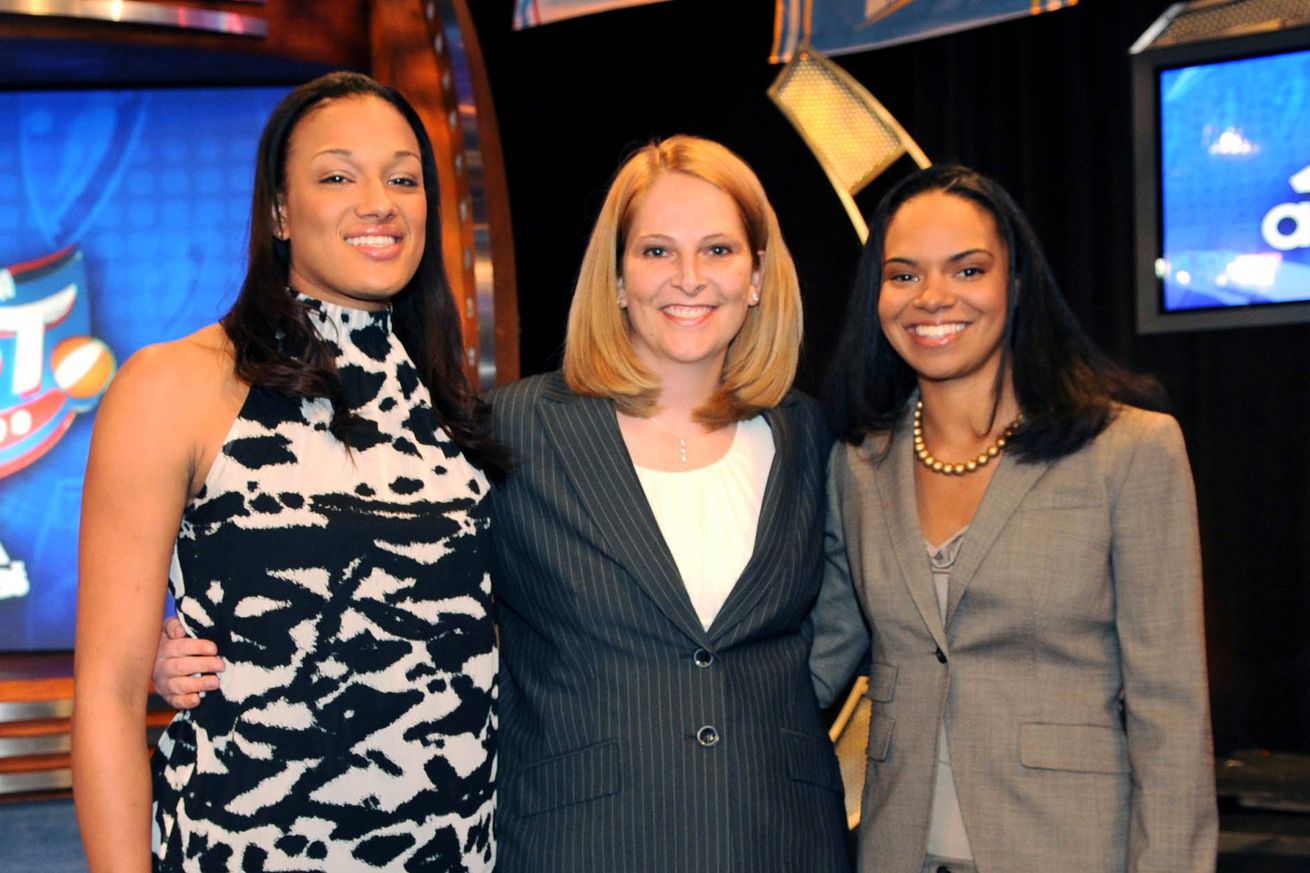 Maryland stars Marissa Coleman (left) and Kristi Toliver (right) as seen with Maryland Terrapins head coach Brenda Frese before going No. 2 and No. 3, respectively, in the 2009 WNBA Draft. | Photo by Jennifer Pottheiser/NBAE via Getty Images

The Maryland Terrapins have developed unique talents and stars who can step up in the big moments. Which players made our list of the best players in program history?

Here’s the all-time starting five for the No. 4 Maryland Terrapins:

“The Shot” as a freshman and 300 threes for her career make Toliver one of Maryland’s best ever.

Toliver hit a game-tying 3-pointer to send the 2006 national championship game against the Duke Blue Devils to overtime. Maryland would go on to win and Toliver, a freshman, cemented her place in Terrapin history.

“The Shot” inspired future generations to want to play at Maryland and Toliver’s play over the next three seasons made her one of the greatest Terrapins of all time. She made 300 triples in her Maryland career at a 40.8 percent clip. She is currently fifth in program history in points and first in assists.

Coleman scored 42 points in a Sweet Sixteen game as a senior in 2009 and was taken No. 2 overall in that year’s WNBA Draft.

Coleman formed a dynamic duo with Toliver. She was also a freshman when the team won it all and she ranks third on the all-time scoring list and fourth in total rebounds. She was one of the most versatile scorers in Maryland history.

Coleman scored 42 points in a Sweet Sixteen game against the Vanderbilt Commodores as a senior in 2009, though she and Toliver were never able to bring home a second championship. The 42 points is tied for the most points in a single game for any Terrapin and the record stands alone in Maryland’s NCAA Tournament history. That Coleman was taken just ahead of Toliver at No. 2 in the 2009 WNBA Draft is a testament to the incredible talent she showcased at Maryland.

Thomas is Maryland’s all-time leading scorer and rebounder and three times was honored with the ACC Player of the Year award.

Alyssa Thomas is the Maryland women’s basketball GOAT. She led the team back to the NCAA Tournament as a freshman in 2010-11 after a one-year absence in 2009-10; she was named ACC Player of the Year in each of the next three seasons.

Thomas’ ability to dominate in transition made her one of the best players in the country while she was in College Park and she was also a triple-double threat every time she stepped on the court. Though a national championship eluded her, she led Maryland to the 2014 Final Four as a senior and remains the program’s all-time leading scorer and rebounder. Thomas left it all on the court and, from a flat-out numbers standpoint, a lot of her records will be difficult to break.

The second-best scorer in Terrapins program history, Bullett won ACC Player of the Year and was named an All-American as a senior.

Bullett is the only member of this all-time starting five who did not play for current Maryland head coach Brenda Frese. She played under Chris Weller and achieved great individual and team success during her four years in the program (1986-89).

A 6-foot-3 versatile forward, Bullett is still second in scoring in program history, trailing only Thomas (17.5 points to 16.9). Bullett won ACC Player of the Year, was an All-American as a senior and went on to play in the WNBA. She is now the head coach at West Virginia Wesleyan College.

Powered by crafty post moves, Langhorne was the leading scorer on the 2006 national championship team.

Before Thomas came along, Langhorne held the top spots in Terrapins scoring and rebounding. And though it was Toliver who made “The Shot” and Laura Harper who was named Most Outstanding Player of the Final Four, Langhorne was the leading scorer on the 2006 national championship team. If we were going by who was the best player on a championship-winning team, Langhorne — and Thomas — would be ahead of 2006’s fab freshmen.

Langhorne makes this starting lineup because of the crafty post moves that made her a great player.

Accolades for Frese and an honorable mention for her predecessor, Chris Weller.

Frese, who took over Maryland’s women’s basketball in 2003, has built up a perennial power that has been to three Final Fours in her 18 years. When the Terrapins won the national championship in 2006, she was just 35 years old. Frese is still inspiring players with the same energy she had when she was a young coaching phenom and her squad has dominated in conference play since moving from the ACC to the Big Ten in 2014-15.

Frese has the national championship, but Chris Weller deserves an honorable mention here — he led Maryland to the first Final Four in the NCAA Tournament era in 1982 and returned the team to the national semifinals in Bullett’s senior year of 1989. Weller was at the helm for 27 years.