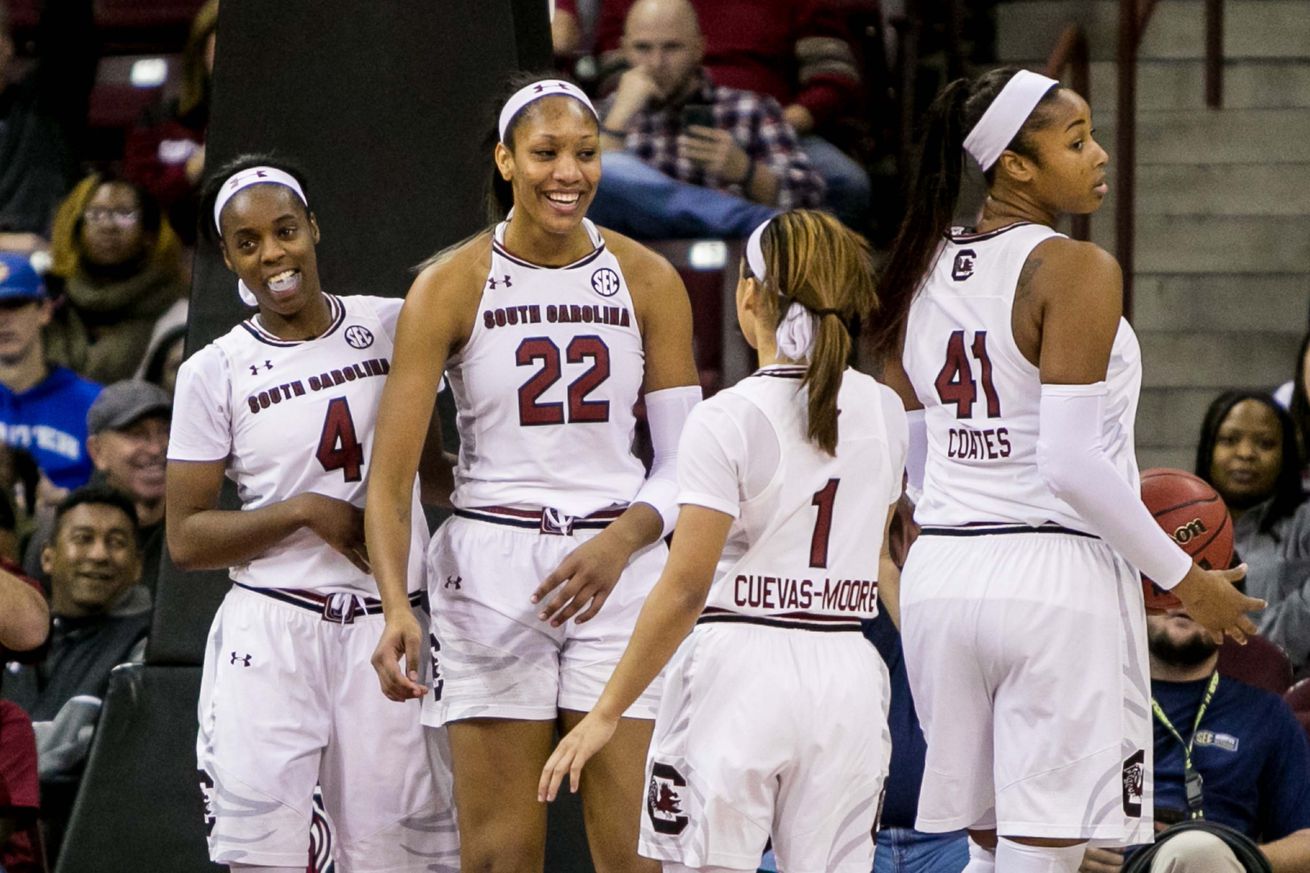 An NCAA women’s basketball powerhouse under Dawn Staley, the South Carolina Gamecocks have had eight players drafted to the WNBA since 2015. Which players made our list of the best players in program history?

Here’s the all-time starting five for the No. 1 South Carolina Gamecocks:

Let’s start with an easy one, shall we?

Simply put: If you think about the Dawn Staley era of Gamecocks basketball, the first player who comes to mind is probably A’ja Wilson. She embodies the ascent of the South Carolina program under Staley and led the Gamecocks to their first-ever NCAA title in 2017 as one of the most dominant bigs in the country and the tournament’s Most Outstanding Player. Wilson was named the SEC’s Player of the Year three times, was an All-SEC First-Teamer four times and was the Naismith College Player of the Year as a senior in 2018 — just a few of her large collection of collegiate honors.

Even all those honors, however, don’t tell Wilson’s full story. Her passion for the game and larger-than-life personality quickly made her a fan favorite at South Carolina, and by the time she graduated and was drafted to the Las Vegas Aces as the WNBA’s 2018 No. 1 overall pick, Wilson’s panache had made her a universally-adored star.

She’s the program’s all-time leading scorer (2,389) and shot-blocker (363), yes, and racked up more NCAA awards during her time at South Carolina than you can shake a stick at. Yet there is an aura surrounding Wilson that you don’t come across with just any star player — she is Gamecock basketball, and is thus a no-brainer on this hypothetical starting five.

A 6-foot-4 center with a broad frame and penchant for finishing in the paint, Coates brought an overwhelming physical presence for the Gamecocks best summarized by two statistics: a collegiate career average of 9.3 rebounds per game (in just 23.5 minutes played) and a cumulative field goal percentage of 62.2 percent. Coates regularly bullied opponents down low and on the glass with teams often unable to match her size as she gobbled up offensive rebounds and finished easy shots at the rim on countless occasions.

Though a foot injury cut Coates’ NCAA career short, she still owns the Gamecock women’s basketball record for total defensive rebounds (850) and has a pair of All-SEC First Team honors to her name. Coates was drafted by the Chicago Sky at No. 2 overall in the 2017 WNBA Draft.

Typically, the origins of a powerhouse NCAA college basketball program can be traced back to a handful of players — “building blocks” that lifted the program to its first taste of success and set the table for future recruits.

Tiffany Mitchell is one such player for South Carolina. Described by the Gamecocks’ official website as the “most decorated women’s basketball player in program history” (which may or may not include Wilson), Mitchell was the star of those upstart Staley teams that always seemed on the cusp of big things — if only they could land one or two more impact players.

Mitchell enjoyed several efficient scoring seasons, using her strength to continuously get to the rim and finish, out-muscling guards several inches taller than her. She continues to play that aggressive brand of basketball with the Indiana Fever, to whom she was drafted in 2016.

In a way, though, Mitchell remains with the Gamecocks — a player who was integral to the foundation of today’s women’s basketball empire.

Believe it or not, South Carolina women’s basketball indeed existed before Dawn Staley took over as head coach. While Shannon Johnson’s Herculean scoring efforts in the mid-1990s might have come at the wrong time for the program — South Carolina reached the NCAA Tournament five times in the previous six seasons with Nancy Wilson coaching the team — it made her accomplishments no less impressive.

In fact, Johnson is one of just three Gamecock women’s basketball players to have her jersey retired by the program. From 1993-96, Johnson amassed 2,230 points, averaging well over 20 points per game in three consecutive seasons. She remains the only player in South Carolina history to accomplish that feat.

The WNBA did not yet exist when Johnson graduated in 1996, but she played in the ABL for a few seasons before becoming South Carolina’s first-ever WNBA draft pick in 1999. Johnson enjoyed a productive 11-year WNBA career, making stops in Orlando (later Connecticut, when the franchise moved), San Antonio, Detroit, Houston and Seattle. Johnson was named to four WNBA All-Star Teams — the most of any South Carolina WNBA product to date — and started for Team USA during their Gold Medal run at the 2004 Athens Olympics.

Going even further back in time, Martha Parker-Hester was one of South Carolina’s very first women’s basketball stars. Like Johnson, her jersey number has been retired by the Gamecocks, and she is a member of the South Carolina Athletic Hall of Fame.

Unfortunately, there isn’t as much content available on Parker-Hester as for the other players on our list, but per the South Carolina Women’s Basketball Record Book, her 1,728 points scored are eighth in program history, while she ranks third in steals (284). During Parker-Hester’s collegiate career (1985-89), South Carolina played in the Metro Conference; she led the team to first-place finishes in three of her four seasons played.

If you search for Parker-Hester now, you’re much more likely to stumble upon her physician’s page. After receiving her undergraduate degree from South Carolina, she returned for more education at the School of Medicine. She now practices family medicine in Columbia, South Carolina as an MD.

Dawn Staley is a women’s basketball legend — there’s no doubting that. For as much as she accomplished as a player, though, her coaching resume might be even more impressive when it’s all said and done.

Having just completed her 12th season as South Carolina’s head coach, Staley has built the Gamecocks women’s basketball program from the ground up. Now it’s one of the best in the country. Since the 2013-14 season, Staley’s Gamecocks have finished first in the SEC four times, going 16-0 twice, and have won the conference tournament three times. She, of course, also oversaw the only NCAA championship in program history in 2017 and, even if you include her early years in Columbia, her cumulative head coaching record at South Carolina is an impressive 305-98.

The best part: Staley’s just getting started. South Carolina women’s basketball games have become one of the best draws in the country during the NCAA season, and Gamecock nation has developed a chip on its shoulder similar to that of their head coach’s. Staley coached the Gamecocks to a 32-1 overall record in 2019-20 — the best in program history — and figures to have them in contention for years to come, now bringing in top recruiting classes on the regular.