Atkins: Mystics protested for ‘everybody who felt it was right for that day and that moment’ 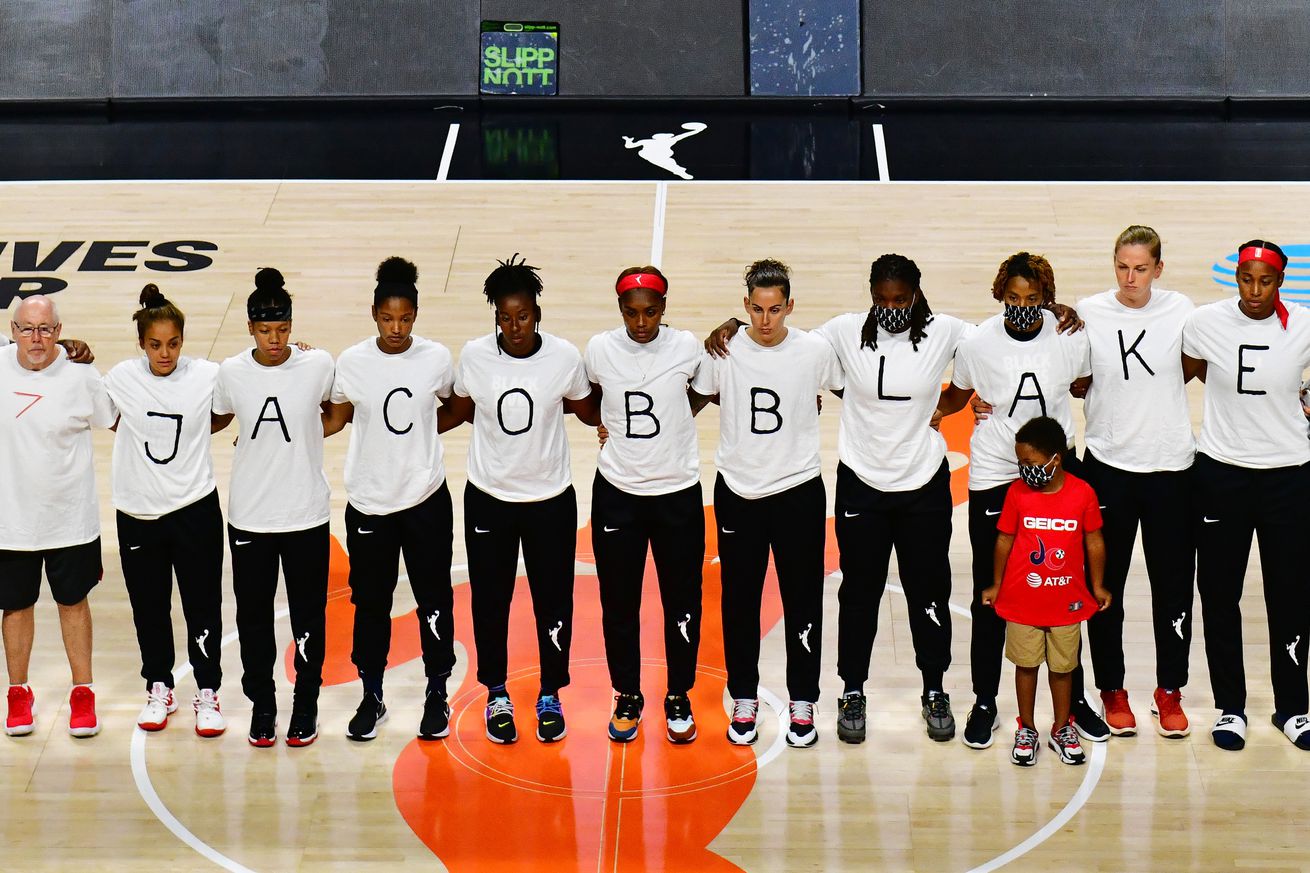 The Washington Mystics spelled out the name “Jacob Blake” with their shirts on Aug. 26, 2020. | Photo by Julio Aguilar/Getty Images

The Washington Mystics took a stand against racism and the rest of the WNBA backed them up.

On Sunday, Aug. 23, twenty-nine-year-old Jacob Blake was shot in the back seven times by police officers as he was getting into his car in Kenosha, Wis. The bullets left him paralyzed from the waist down.

It was yet another act of police brutality against a Black individual and led to the NBA’s Milwaukee Bucks’ choice on Wednesday, Aug. 26, to opt out of Game 5 of their first-round playoff series in protest. The Bucks’ decision gave the WNBA’s Washington Mystics a lot to think about that same day and, ultimately, the Mystics decided to sit out that evening’s regular-season game against the Atlanta Dream.

This led to a conversation between the Mystics and the Dream on one of the two courts at IMG Academy in Bradenton, Florida — the home of the 2020 WNBA season. Mystics third-year forward Myisha Hines-Allen was seen leading the discussion, which resulted in not just the Dream following suit, but also the four other WNBA teams slated to play that night choosing not to play. The WNBA games the following night (Aug. 27) also were postponed, resulting in the league’s 12 teams all taking part in the protest.

After the initial decision on the 26th, ESPN reporter Holly Rowe spoke with Mystics third-year guard Ariel Atkins, who was surrounded by her teammates — each wearing a letter that spelled out Jacob Blake’s name.

Interview: The Mystics explain their reasoning for sitting out

“It was tough,” Atkins said of the decision in a recent Zoom call. “I think the most important thing is that we wanted to stand with our community, our NBA brothers and everybody who felt it was right for that day and that moment.”

Atkins added that the Mystics didn’t want to force themselves to play just because they were afraid, wouldn’t get paid or would be ridiculed.

“It was important for (our community) to know that we’re there for them and we see them and we hear them,” she said.

The Mystics are the defending WNBA champions and their vocal point guard Natasha Cloud was among the first players in the league to opt out of the 2020 season to combat social injustice. On Aug. 26, Washington, and the WNBA as a whole, continued to be at the forefront of change.

“It was kind of one of those things where, ‘Do you really want to stand for something that you’re feeling and support your teammates and what they’re feeling?’” Atkins asked. “Because I have some very strong, opinionated teammates and they’re always going to stand for what they believe in and put their foot down.

“I’ve always been kind of the go-with-the-flow type of person. But they really challenged me to honestly just say ‘no.’ … That was what we felt was best that day and I’m thankful that my team allowed me to talk on their behalf.”

The Mystics’ usual team leaders, Cloud and star player Elena Delle Donne, are not in the bubble since Delle Donne opted out of the season due to a preexisting health condition (Lyme disease). But Hines-Allen and Atkins, both 24 years old, rose to the occasion.

“I think that’s been a big part of their development this summer,” Mystics head coach Mike Thibault said of the pair. “I think that their passion for what we’re trying to accomplish has served them and our team well. It’s nice to see younger players learn to have a voice and I’m proud of them for that.”

The powerful voices coming from all the WNBA players right now continue to draw praise from around the country in the ongoing battle to end systemic racism and police brutality. Atkins said she knows sitting out two games isn’t going to end racism on its own, but she is glad that the Mystics used their platform to the best of their ability.