Baylor gets caught in Cyclone upset 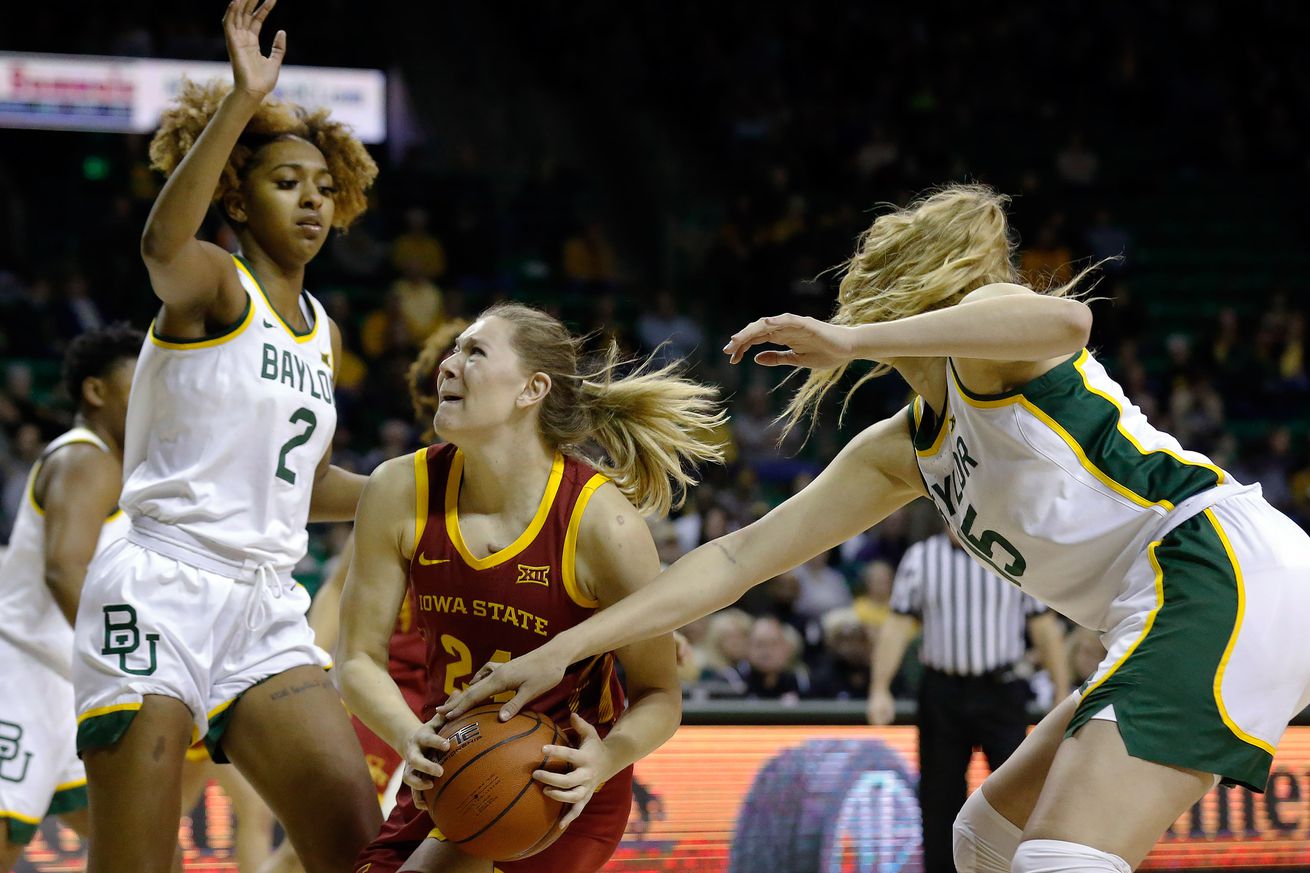 On Sunday, Ashley Joens (in red) scored 15 points, 5.5 below her season average, and it was enough to lead Iowa State past Baylor. | Raymond Carlin III-USA TODAY Sports

“Around the NCAAW Weekly” highlights the notable events of the week. Check out the milestones, surprises, best games and outstanding performances for games played through Sunday, March 8:

The Lady Bears seemed destined for a perfect Big 12 record until this past Sunday when Iowa State Cyclones star Ashley Joens led her team to a 57-56 upset.

The Iowa State victory ended Baylor’s 58-game Big 12 winning streak, which had been the longest active conference-play streak in the nation. From the Cyclones’ perspective, the win was their second-ever against the No. 2 team in the nation; they got their first against the Texas Tech Raiders in 2004.

Iowa State has never defeated a team ranked conference No. 1.

The Lady Bears (28-2) also had won 44 straight Big 12 road games. Until the meeting with the Cyclones, the Lady Bears were on a 21-game winning streak.

The Huskies won their 136th consecutive AAC game on March 2, marking their seventh straight undefeated season. UConn hasn’t lost since joining the AAC and that includes games in the league’s conference tournament as well. The 80-39 win over the South Florida Bulls was highlighted by 23 points from Megan Walker.

On March 7, Princeton finished its Ivy League slate at a perfect 14-0 with a 69-50 win against the Cornell Big Red on the road. The Tigers’ closest call in the Ivy League this year was a 14-point win at Harvard on Feb. 1.

Princeton has earned an automatic bid to the NCAA Tournament because the conference tournament was cancelled due to the coronavirus.

The Ivy League will not hold its men’s and women’s conference tournaments. The league’s regular-season champions, Princeton women and Yale men, are the automatic qualifiers to the NCAA tournaments.

The Lady Bears defeated the Loyola Chicago Ramblers 72-61 on March 7 for their 26th win, setting a program record for wins in a regular season.

The Horned Frogs scored 96 points in their win over the Oklahoma Sooners on March 4, a new program record for points scored in a Big 12 game. Prior to the contest, TCU’s Big 12 scoring high was achieved in a 93-72 win over the Texas Tech Red Raiders in 2018.

Three days later, TCU topped the West Virginia Mountaineers 77-63 for its 13th Big 12 win of the season. The Horned Frogs had never reached that many wins in Big 12 play, but they did achieve those numbers in the Mountain West Conference in 2010-11. With the win, TCU has seven Big 12 road wins this season, another program record.

Regular season games of the week

Lea Kerstein, who played just one minute total, hit the game-winning 3-pointer in overtime with one second on the clock. The Monarchs battled back from down 16 points in the first quarter and their largest lead was two with 2:44 to go in overtime. UAB’s Miyah Barnes led all scorers with 16 points and also recorded five rebounds and four assists.

Kamiah Smalls scored 12 of her 24 points in the fourth quarter to help the Dukes come back from down four points entering the final frame. Smalls also hauled in eight boards; teammate Jackie Benitez scored 18 points. It was a close game throughout, with the Phoenix possessing the game’s largest lead of nine points with 2:33 left in the second quarter. Smalls put the team on her back in the final period and scored over half of James Madison’s 23 points in the fourth quarter.

The Hilltoppers scored the final five points of the contest, and Raneem Elgedawy’s layup with 53 seconds remaining proved to be the game-winner. After that, Western Kentucky iced the game with three made free throws. Louisiana Tech led by 10 points after the first quarter but the Hilltoppers cut the lead to one with a 19-10 second quarter. The Hilltoppers won the third (25-21) and fourth (13-12) quarters. Dee Givens led the Hilltoppers with 18 points, while Raizel Guinto notched a game-high 20 points in defeat.

Amani Johnson: 45 points, nine assists and five rebounds for the Kennesaw State Lady Owls in a ASUN Tournament loss to the Liberty Lady Flames on March 7.

DJ Williams: 38 points, 12 rebounds and four assists for the Coastal Carolina Lady Chanticleers in a loss to the Appalachian State Mountaineers on March 7.

Tesia Thompson: 39 points, eight assists and five rebounds for the Southeast Missouri State Redhawks in an OVC Tournament win over the Belmont Bruins on March 6.

Sabrina Ionescu: 31 points, nine rebounds and seven assists for the Oregon Ducks in a Pac-12 Tournament win over the Arizona Wildcats on March 7.

Davion Wingate: 38 points and five rebounds for the Florida Gulf Coast Eagles in a ASUN Tournament win over the Lipscomb Lady Bison on March 7.

Reason to watch: It’s a Big 12 Tournament quarterfinal game and both teams are on the bubble, with Texas leaning toward making the tournament and West Virginia leaning toward not making it. Charlie Creme of espnW currently has the Longhorns projected as a 10-seed and the Mountaineers barely missing out on the Big Dance.

How to watch/listen: ESPN2