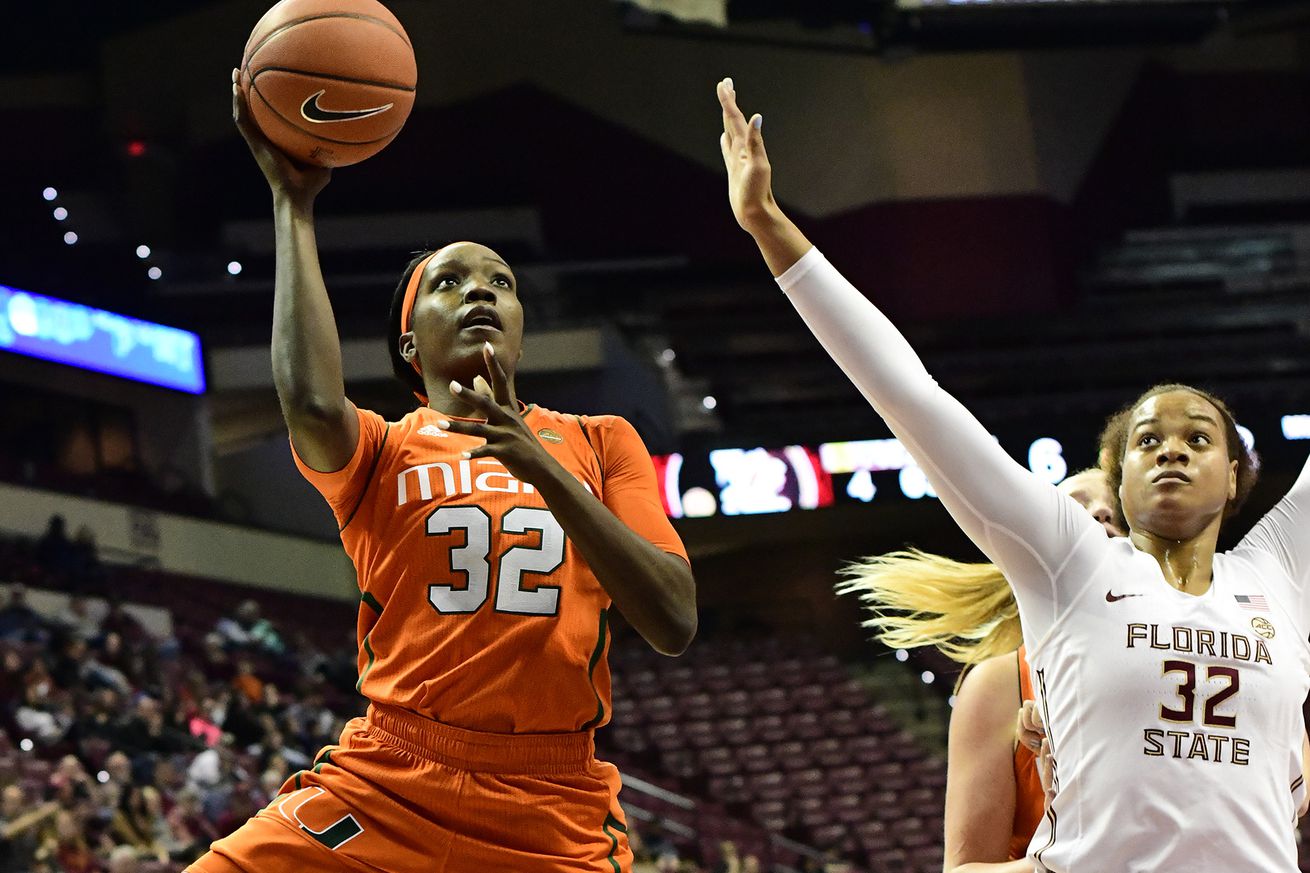 Beatrice Mompremier (with ball) goes up for a shot during her phenomenal junior year with Miami. | Photo by David Allio/Icon Sportswire via Getty Images

Beatrice Mompremier of the Miami Hurricanes was on track to make the WNBA, but a senior year foot injury and the COVID-19-induced cancellation of 2020 training camps led to her being waived by the Los Angeles Sparks.

Last Tuesday, the Los Angeles Sparks narrowed their roster down to 12 players. It did not end up including 6-foot-4 forward Beatrice Mompremier, who was one of the biggest names in the country while in college.

Mompremier was a steal for LA at No. 20 in the 2020 WNBA Draft and would have fit in well with the Sparks, whose biggest weakness last year was interior defense. They needed to add a solid post player, but chose Marie Gülich and Kristine Anigwe instead.

LA seemed to go out of its way to get Gülich (the No. 12 pick in 2018) and Anigwe (the No. 9 pick in 2019) in trades this past offseason. Both players went higher than Mompremier in their respective drafts, and both have at least some WNBA experience.

Even so, the Sparks lost a player with great potential in Mompremier.

Coming out of high school, Mompremier was HoopGurlz’s No. 20 overall prospect and the No. 3 post player. In her senior year of high school (2015) she averaged 25.2 points, 15.2 rebounds, 5.0 blocks and 3.5 steals per game, won a state championship for Miami Senior High School and was named Miss Florida Basketball.

Mompremier averaged a double-double in all four years of high school.

Mompremier played her first two college seasons with the Baylor Lady Bears. Over the course of her freshman and sophomore years in Waco, she notched 7.7 points, 6.3 rebounds and 14.7 minutes per game. She then transferred to the University of Miami.

Her minutes skyrocketed to 29.6 per game as a redshirt junior with the Hurricanes in 2018-19. That season she went back to her double-double ways with 16.7 points and 12.2 rebounds per contest, and even contemplated entering the WNBA Draft a year early.

Instead, Mompremier chose to return to Miami for her final year of eligibility and was named a preseason All-American by The Associated Press. Of the five players who were selected for that honor, Mompremier is the only one who didn’t make a WNBA roster when final cuts were made last week.

Three of those five preseason All-Americans were selected within the first four picks of the 2020 WNBA Draft, making them roster locks. Sabrina Ionescu of the Oregon Ducks was selected No. 1 overall by the New York Liberty, Lauren Cox of the Baylor Lady Bears went at No. 3 to the Indiana Fever and Chennedy Carter of the Texas A&M Aggies was taken at No. 4 by the Atlanta Dream.

Mompremier, who fell to the Sparks at No. 20, was taken ahead of one fellow preseason All-American in Kaila Charles of the Maryland Terrapins, but Charles made the Connecticut Sun roster after going at No. 23 overall.

In 17 games as a redshirt senior, Mompremier recorded 16.8 points per game, while her rebounding dropped to 9.8 boards per game. Her foot injury was extremely detrimental for the preseason No. 18 Hurricanes. Mompremier went down against the Florida State Seminoles on Jan. 2; Miami went 4-9 without her before finishing 15-5 overall and 7-11 in the ACC.

However, Mompremier was still projected as a first-round pick by our Eric Nemchock and ESPN. She returned to the court on Feb. 23 against the Boston College Eagles and looked good with 19.0 points and 8.0 rebounds over the final four games of the season, so it was surprising to see her drop all the way to No. 20.

Highlights: Mompremier battles her way to big numbers as a Hurricane

Mompremier certainly wasn’t alone in the mess that the COVID-19 pandemic created. But, of the 18 players who got cut, she may have been one of the closest to making a roster.

Candace Parker, Chiney Ogwumike and Nneka Ogwumike are the three frontcourt stars for the Sparks, who chose to have a total of five post players on their final 2020 roster. The other two are Gülich and Anigwe, the latter of whom LA received in a trade with the Dallas Wings the same day it cut Mompremier. The Wings received a second-round pick (which they sent to LA earlier in the offseason in exchange for guard Marina Mabrey), while the Sparks received Anigwe and a third-round pick.

Gülich (6-foot-5) has a one-inch height advantage over Mompremier and was clearly valued by the Sparks; they sent potential star Kalani Brown (6-foot-7) to the Atlanta Dream in the trade that brought Gülich to LA. Gülich has averaged 2.5 points and 8.6 minutes in her two years in the WNBA, with the first season coming as a member of the Phoenix Mercury.

Meanwhile, Anigwe (6-foot-4) split her rookie season between the Sun and the Wings and played 9.3 minutes per game, averaging 2.4 points. She put up gaudy stat lines for the Golden Bears — including 22.5 points and 16. 2 rebounds per game for her senior season — and seemed like the type of player who could single-handedly lead her team to greatness, though Cal never reached the Sweet Sixteen while she was in Berkeley.

The Sparks may have seen it as a toss up between Gülich, Anigwe and Mompremier. And in the end, they, like so many other teams last week, favored the players who they’ve seen play in the pros over a new draftee who missed out on training camp.