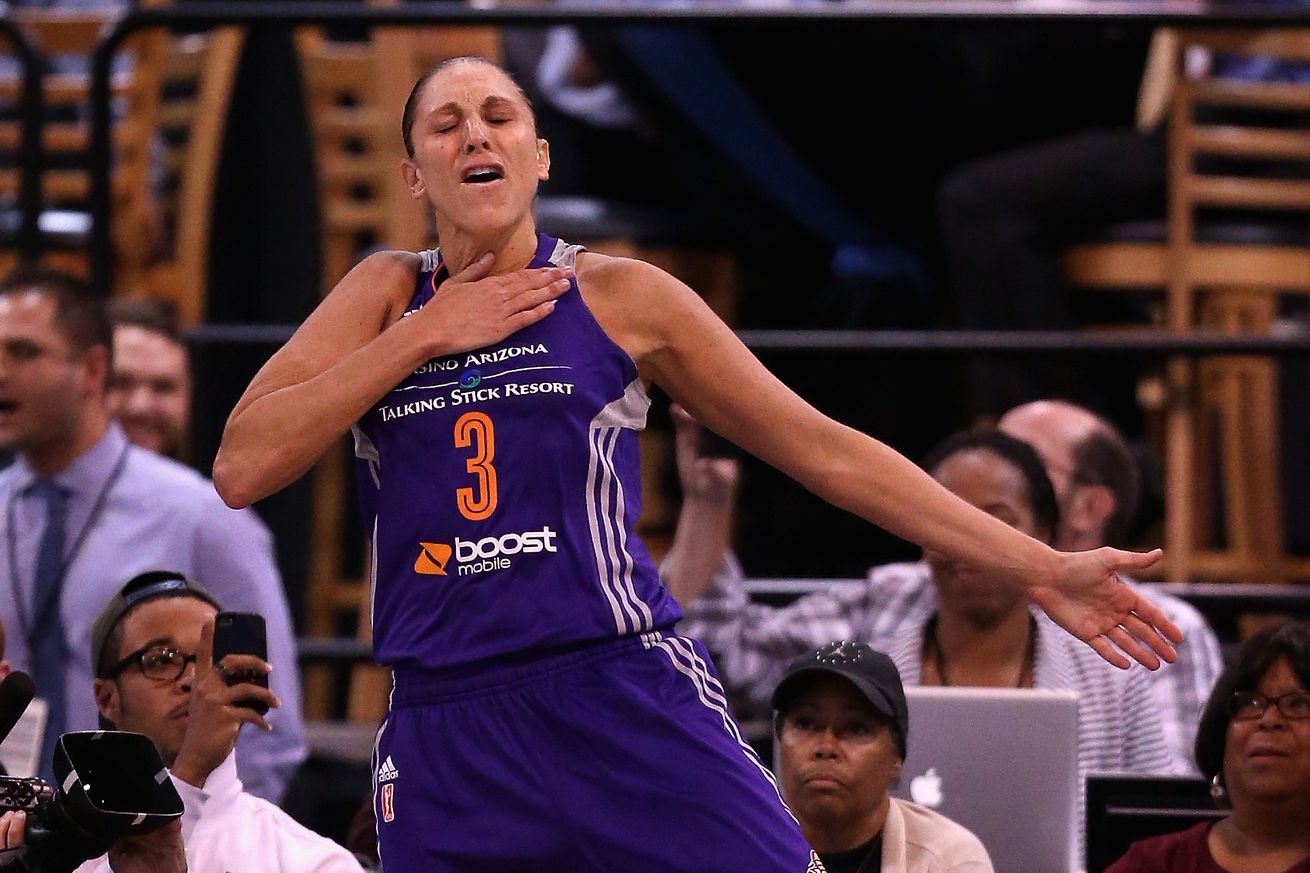 Respected as one of the best to ever play the game, Diana Taurasi celebrates drawing a foul on a made basket during Game 3 of the 2014 WNBA Finals against the Chicago Sky. Her Phoenix Mercury defeated the Sky 87-82, handing Taurasi her third WNBA title. | Photo by Jonathan Daniel/Getty Images

The Swish Appeal roundtable convened and the choice is clear: WNBA all-time leading scorer Diana Taurasi is the top No. 1 pick in WNBA history. But Candace Parker, Sue Bird, Maya Moore, Lauren Jackson and Tina Thompson weren’t far behind in the voting.

From Tina Thompson in the league’s inaugural draft in 1997 to Sabrina Ionescu in 2020, there have been 24 No. 1 overall picks in the WNBA and most have made everlasting imprints on the league’s history. Thus, choosing the best of the No. 1 picks from a list that includes Hall of Famers and future Hall of Famers Thompson, Diana Taurasi, Chamique Holdsclaw, Lauren Jackson, Sue Bird, Candace Parker, Seimone Augustus, Maya Moore, Nneka Ogwumike, Brittney Griner, Angel McCoughtry and Breanna Stewart isn’t easy.

Yet, we, silly kids, at Swish Appeal attempted to do it anyway and here’s how it went.

I asked the Swish Appeal contributors to select the top five No. 1 picks in WNBA history and, from their individual top five, name the player they view as the best of all the rest. All of us chose Diana Taurasi as one of our top five No. 1 picks, with Candace Parker and Sue Bird making it on five of six of our lists.

Four of us selected Maya Moore as one of the five best No. 1 picks, and three chose Lauren Jackson and Tina Thompson.

Tina Charles was named a top five No. 1 pick by two contributors, and Margo Dydek and Chamique Holdsclaw each got a vote.

The other No. 1 picks did not receive votes in this very small, ridiculously unscientific survey.

Here’s our thinking behind our selections for the No. 1 No. 1 pick in WNBA history!

The No. 1 pick of No. 1 picks is the first No. 1 pick, Tina Thompson. While her resume and resonance may not approach that of other No. 1 picks, she met — or, better yet exceeded — her moment in a way that enhances her historical importance.

When Thompson was drafted in 1997, the legitimacy of the WNBA was in question. An inaugural No. 1 pick who was a bust would raise further questions about the league’s viability. Instead, Thompson was absolutely fantastic, helping to cement the seriousness of the WNBA as a member of the four-time champion Houston Comets.

Throughout her career, she also flashed an ahead-of-her-time skill set, not only dominating the block but also drilling 3-pointers. She, thus, established excellence as the expectation for future No. 1 picks. Her longevity, especially how she maintained top form over her 17-year career, provided a model for other players in the No. 1 pick pantheon, namely Sue Bird and Diana Taurasi.

In short, celebrate Tina Thompson — she set the standard.

Maya Moore is my top pick simply for her on- and off-court accomplishments.

Not to mention, her sneaker collabs are the best of the top draft picks.

(Jasmine Baker: a woman of few, but very meaningful, words.)

Lauren Jackson was ‘the blueprint for so much’

There has never been a more complete WNBA player than Lauren Jackson. She dominated both ends of the floor for a decade, exhibiting a remarkable combination of size and skill that was years ahead of its time. When teams seek long, skilled “unicorn” forwards, they are hoping to get the next Lauren Jackson. She could dribble, pass and score from anywhere on the court, as well as rebound and defend the rim with the best of them.

Jackson’s resume speaks for itself.

She won three WNBA MVP awards and a Defensive Player of the Year award; she was named to the All-WNBA Team in eight straight seasons. Jackson also has the team success to back up her individual accolades, having won WNBA championships with the Seattle Storm in 2004 and 2010. Her second title came with yet another individual honor — Finals MVP.

What pushes Jackson over the edge as the greatest No. 1 overall pick was her influence as the league’s first truly great international player. Even if you discount Jackson’s accomplishments with the Australian national team, it’s impossible to ignore how during a crucial period of the WNBA’s development, she was able to compete with — and consistently outplay — her contemporaries in a foreign league.

Jackson was the blueprint for so much of what we now take for granted in the women’s basketball world: multi-talented forwards, the rise of pro ball in Australia and the Storm as a franchise. During her time in the WNBA, she was simply larger than life, and in my mind, the greatest WNBA player ever.

Diana Taurasi’s ‘all-around prowess puts her on another level’

Diana Taurasi was drafted in 2004 by the Phoenix Mercury after an illustrious college career at the University of Connecticut. Her rookie season was an outstanding success — she won the Rookie of the Year award and was named to the All-WNBA First Team, her first of 13 selections to an All-WNBA team. Taurasi is the WNBA’s all-time leader in points, made 3-pointers and made field goals despite being fourth in minutes played and 16th in career games played.

Her career average of 19.6 points is highest among those drafted No. 1 overall.

Additionally, despite being a guard, Taurasi is 22nd in blocks and 20th in career rebounds. Her all-around prowess puts her on another level among those drafted as the top overall pick.

A three-time WNBA champion, Taurasi has been recognized as league MVP once and twice as Finals MVP. She is a five-time scoring champion and holds the record for the two highest scoring seasons in WNBA history. Her contributions on the offensive end are exemplified in the advanced metric Offensive Win Share, where Taurasi holds the all-time record of 57.2 and the third best Win Share of 65.3, trailing fellow No. 1 pick Lauren Jackson and the Tamika Catchings, Swish Appeal’s selection for the best No. 3 pick in WNBA history.

Taurasi’s longevity at 15 seasons and continued dominance put her above those drafted No. 1 overall.

Diana Taurasi has ‘swagger that rivals all swagger’

Diana Taurasi burst into the league with Michael Jordan-meets-Kobe Bryant swagger, thus, elevating the WNBA’s overall play and infusing the league with excitement. In 2001, Lauren Jackson brought with her from Down Under a new style of post play characterized by a versatile, do-all skill set. Taurasi, meanwhile, came with a new style of guard play when selected No. 1 overall in 2004. She demoralized opponents with her crafty playmaking, tough as nails competitiveness and deadly midrange and 3-point shooting.

She elevated the on-court product by nature of being so good that opponents had to get better to have a chance at beating her. Thus, she changed the game.

With three championships, plus Rookie of the Year, league MVP and Finals MVP awards to her credit, Taurasi has the hardware to back up her place as the crème de la crème. Eclipsing Thompson’s 20-year hold on the league’s all-time scoring record in 2017, however, certified her status as the best of the best — la cerise on top of la crème.

Taurasi lore would be incomplete, however, without mention of her swagger that rivals all swagger. From jawing with the refs, dropping F-bombs and getting chippy with opponents, Taurasi is no stranger to technical fouls or ejections. Her passion drives her and her team even if sometimes it is manufactured for that purpose. But her unwillingness to tamp down the intensity of a fiery personality in the face of a society that wants its women athletes mild-mannered and demure is an achievement all its own.

Plus, when Elena Delle Donne in 2016 threw her support behind the idea to lower the rim in the WNBA, Taurasi quipped, “Might as well put us in skirts and back in the kitchen.”

Diana Taurasi ‘has made the players around her better’

Diana Taurasi’s 15 years in the league and counting trail only Tina Thompson’s 17 years and Sue Bird’s 16. At 6 feet, she is a dominant guard who can score in a variety of ways and wows spectators with amazing passes. The all-time WNBA leader in points scored, Taurasi is also a solid rebounder and defender as well. A few players may be neck-and-neck with her statistically, but Taurasi’s longevity and three championships set her apart.

Lauren Jackson, a 6-foot-6 forward/center who was a complete all-around player, played three fewer seasons and won one fewer championship. Meanwhile, the only No. 1 draft picks with four titles are Tina Thompson, Seimone Augustus and Maya Moore. Thompson’s and Augustus’ career averages don’t measure up to Taurasi’s, though, while Moore has played just eight years in the league so far.

Although Taurasi has only one MVP award while three players — Jackson, Lisa Leslie and Sheryl Swoopes — have three, she has been a fixture on All-WNBA teams with 13 total appearances on either the first or second team.

Throughout her career, she has made the players around her better, whether it be forwards Penny Taylor and DeWanna Bonner or center Brittney Griner. Seasoned veterans Candace Parker and Tina Charles, along with young stars Breanna Stewart, A’ja Wilson and Sabrina Ionescu, have a chance to finish their careers with better resumes than Taurasi. For now, however, 2004’s No. 1 pick out of UConn takes the cake as the best No. 1 pick of all time.