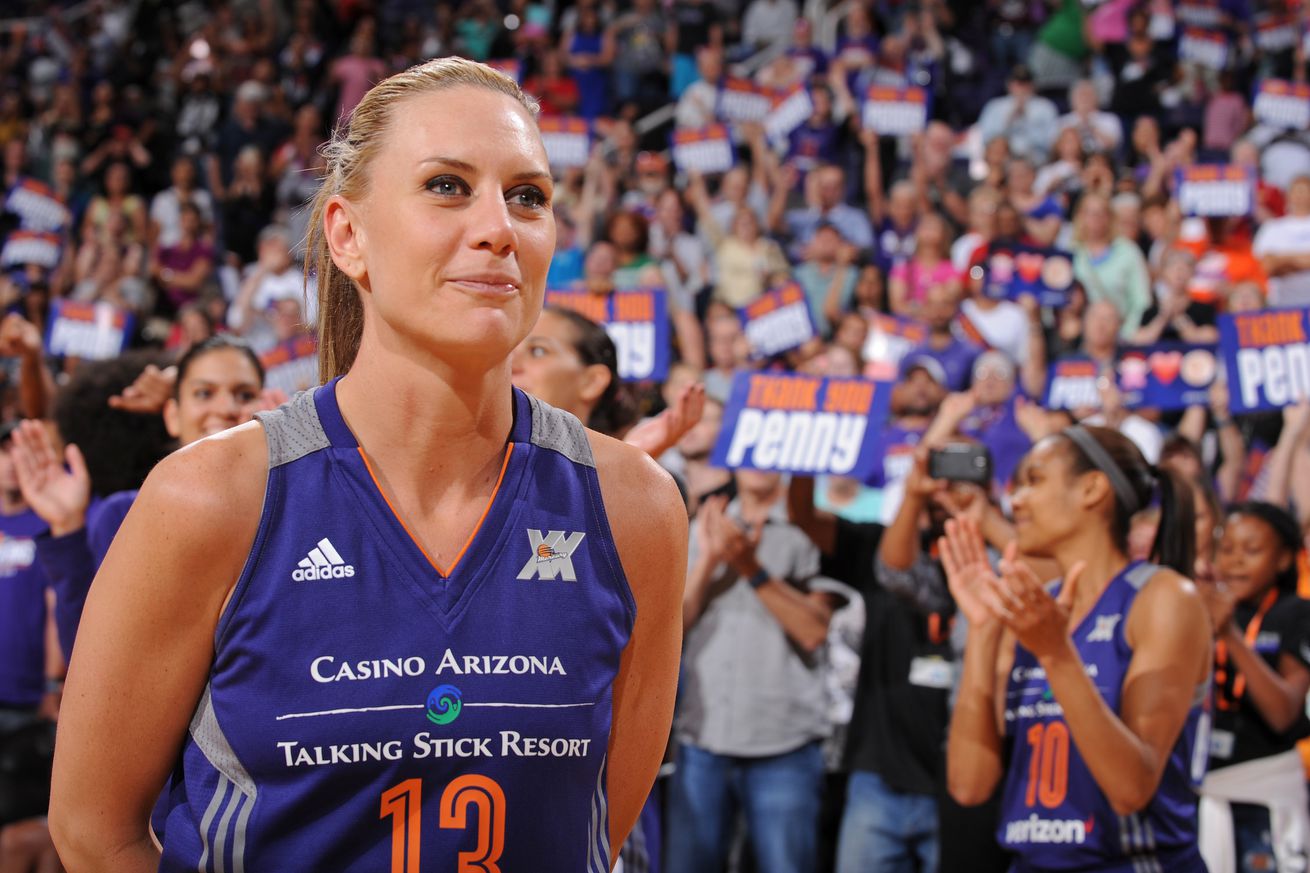 Penny Taylor (left) as seen after her final regular season game in Phoenix in 2016. | Photo by Barry Gossage/NBAE via Getty Images

Penny Taylor is one of the Phoenix Mercury’s all-time great players. She played with them for 10 years and was key during the team’s seven-year stretch of winning three WNBA championships.

Highlights: Penny Taylor at her best

The 2007 season was a special one for Taylor, and not just as an individual. The Mercury franchise won their first WNBA title that year and Taylor averaged 19.3 points, a team-high 7.9 rebounds and 3.8 assists during the postseason run. She scored 32 points in the opening game of the WNBA Finals against the Detroit Shock and, although Phoenix lost that game, she dropped 30 points in the winner-take-all Game 5, which the Mercury won 108-92.

In 2009, Taylor averaged 15.6 points in another five-game Finals for Phoenix — this time a triumph over the Indiana Fever. She then averaged 11.3 points and six assists in the Mercury’s three-game Finals sweep of the Chicago Sky in 2014.

When you look at her major contributions to three championship teams, it’s hard to not consider Taylor an all-time great. She was a hugely important player for the Mercury, the team she played 10 seasons with after three years in Cleveland, and backed up fellow stars Cappie Pondexter, Diana Taurasi, DeWanna Bonner, Candice Dupree and Brittney Griner.

Interview: Taylor discusses her career as 2016 season winds down

Taylor continues to thrive in the Phoenix community where she was a beloved player. She is now an assistant coach for the Mercury under Sandy Brondello, who took over as the head coach in 2014.

Among Taylor’s basketball accolades is a gold medal from the 2006 FIBA World Championship, where she represented Australia. That was Australia’s first gold at the event, which has been won by the U.S. six of the past eight times it has taken place. Taylor also has two Olympic silver medals.

Current Los Angeles Sparks point guard Chelsea Gray has already been to three All-Star Games and will likely play in quite a few more en route to becoming the best No. 11 pick of all-time once her career is over. After her and Taylor, forward/center Chasity Melvin and guards Ivory Latta and Shavonte Zellous round out the top five No. 11 picks in WNBA history.

Gray was selected by the Connecticut Sun in the 2014 draft and her career numbers stand at 11.4 points, 2.9 rebounds and 4.1 assists per game. She did not play during the 2014 season due to injury and has spent the last four seasons with the Sparks.

Melvin, who was drafted in 1999 and played with Taylor in Cleveland, is second behind her former teammate with 12 seasons played as a No. 11 pick. Melvin made it to the All-Star Game in 2001 and went on to play for the Washington Mystics and the Sky. Her career-high points per game average (13.1) was achieved in 2003 and she recorded 6.7 rebounds per game three times.

Latta, a spark plug point guard, was taken by the Detroit Shock in 2007 and went on to play for the Atlanta Dream before returning to the Shock franchise in Tulsa. She spent her final five seasons with the Mystics and represented them in the 2013 and 2014 All-Star games. Latta averaged double-figure scoring seven times, with her best mark coming at 14.3 in 2012. Her best assist average was 4.4 in 2013.