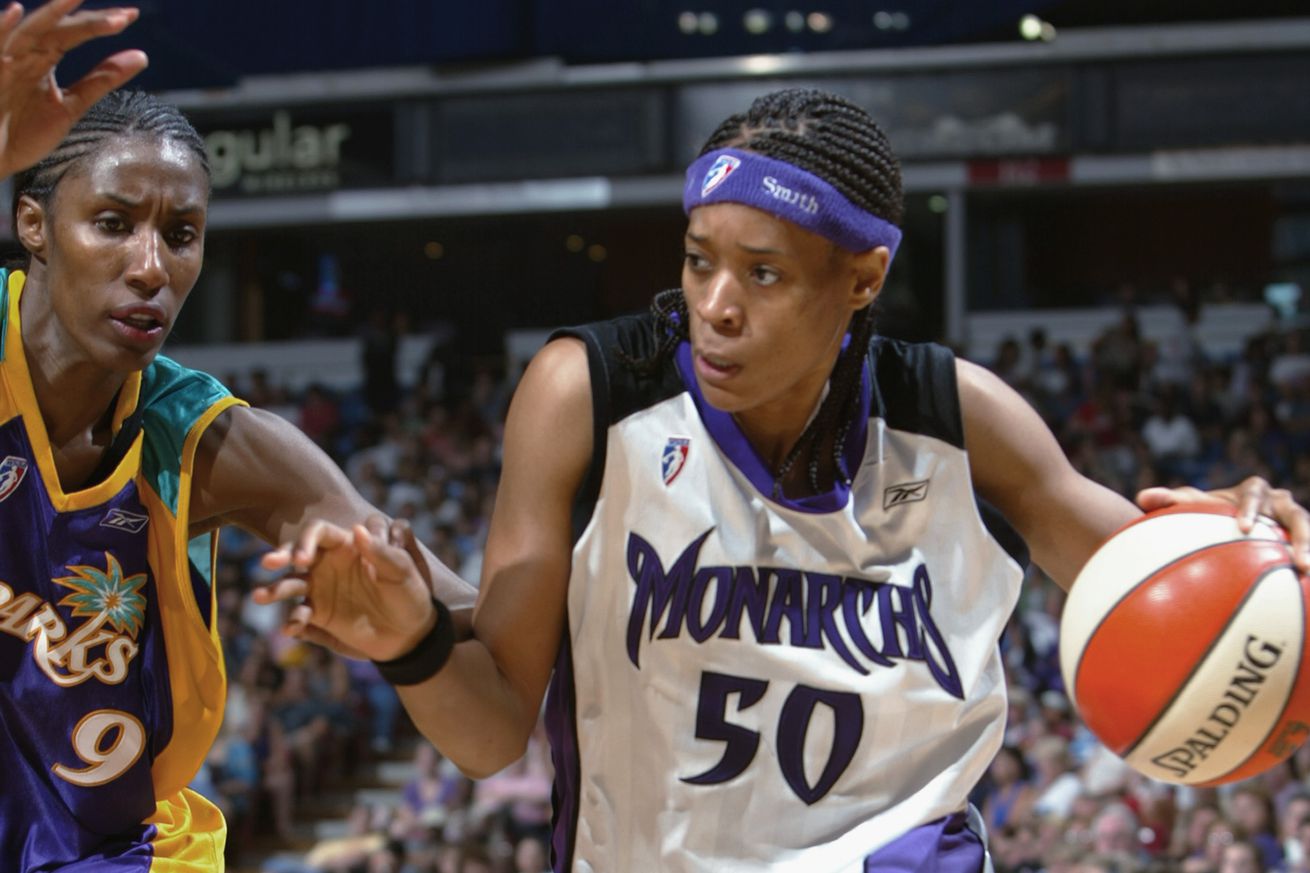 Tangela Smith (with ball) made a name for herself in Sacramento. | Photo by: Rocky Widner/WNBAE/Getty Images

In her prime playing for the Sacramento Monarchs, Charlotte Sting and Phoenix Mercury, Tangela Smith performed at a consistently high level. Smith played a total of 15 years in the WNBA.

Tangela Smith, a 6-foot-3 center out of Iowa, was the WNBA’s No. 12 overall pick in 1998. She was drafted by the Sacramento Monarchs and averaged 9.7 points, 4.6 rebounds and 1.6 blocks as a rookie. In 2000, she registered her first of nine-straight seasons in double-figure scoring with 12.1 points per game.

Smith played a total of seven years in Sacramento, with the best scoring average of her career (14.7) coming in 2002. She left the Monarchs after the 2004 season — right before the team won the WNBA championship in 2005.

Smith spent two years with the Charlotte Sting after leaving Sacramento and made it to her lone All-Star Game in 2006. She ended up winning two championships — in 2007, followed by another in 2009 — with the Phoenix Mercury.

Smith wrapped up her career with a single season as a member of the Indiana Fever in 2011 and a 2012 season spent with the San Antonio Silver Stars. Over 15 years in the league she averaged 10.9 points and 5.0 boards. Her career-high in rebounding average was 7.0, achieved in 2008. She also averaged better than 1.5 blocks per game five times, with her career-best coming in at 2.0 in 2000.

Smith’s longevity as a No. 12 pick is impressive, considering the fact that there were 11 players taken ahead of her in one season, while only six are ahead of her in career games played. Smith suited up in a WNBA uniform 463 times, trailing only Sue Bird, DeLisha Milton-Jones, Tina Thompson, Katie Smith, Lindsay Whalen and Swin Cash.

Smith is also sixth all-time with 557 blocks, but was more than an inside presence — she led the league with a 3-point percentage of 45.2 in 2009, totaling 42 makes. She didn’t exhibit that dominance from beyond the arc throughout her whole career, but did finish with 235 triples made at a 34.3 percent clip.

Smith began pursuing a coaching career in 2014 and is now an assistant coach for the Northwestern Wildcats in Chicago, her home city. The Wildcats enjoyed unprecedented success in 2019-20, sharing the Big Ten regular-season title for the first time and ending up with the highest end-of-season ranking in program history (No. 11 in the AP Poll).

Tanisha Wright, a guard who recently retired and joined the Las Vegas Aces’ coaching staff, played 14 years in the WNBA (10 with the Seattle Storm) and was a key contributor throughout her career. Although she never made an All-Star game, Wright averaged double-figure scoring three times and over four assists four times. The 2005 draftee also scored 17 points and notched five steals in Game 2 of the 2010 WNBA Finals, a series that her Storm went on to win 3-0.

Meanwhile, point guard Jasmine Thomas of the Connecticut Sun is the best active No. 12 pick, followed by forwards Damiris Dantas of the Minnesota Lynx and Isabelle Harrison of the Dallas Wings.

Thomas was drafted by the Storm in 2011 but was traded to the Washington Mystics before the season and spent two years in DC. After that, she played for the Atlanta Dream for two seasons before landing in Connecticut. Now entering her sixth year with the Sun, Thomas’ best years have come in Uncasville. She has averaged at least 11.1 points and 4.3 assists in each of the past four seasons. In 2017 she made it to her first All-Star Game and finished that season with a career-best 14.2 points per game.

During the regular season last year, Thomas averaged 5.1 assists per contest (tied for a career-best) and went on to drop 29 points in a series-clinching Game 3 of the semifinals against the Los Angeles Sparks. She was a key member of a team that took the eventual champion Mystics to Game 5 of the Finals and is expected to be a key player again this year. She has been in the league for nine years and, at age 30, could still make another All-Star team, which would put her ahead of Smith with regards to that measure of success.

Dantas returned to the Minnesota franchise that drafted her in 2014 and posted career bests with 9.2 points and 25.7 minutes per game in 2019. She started in all 26 games she played in. Harrison, who was drafted in 2015, saw her numbers decline in 2019, but is still a young player who could pick things up again. She averaged career bests with 11.4 points and 6.4 boards in 2017.