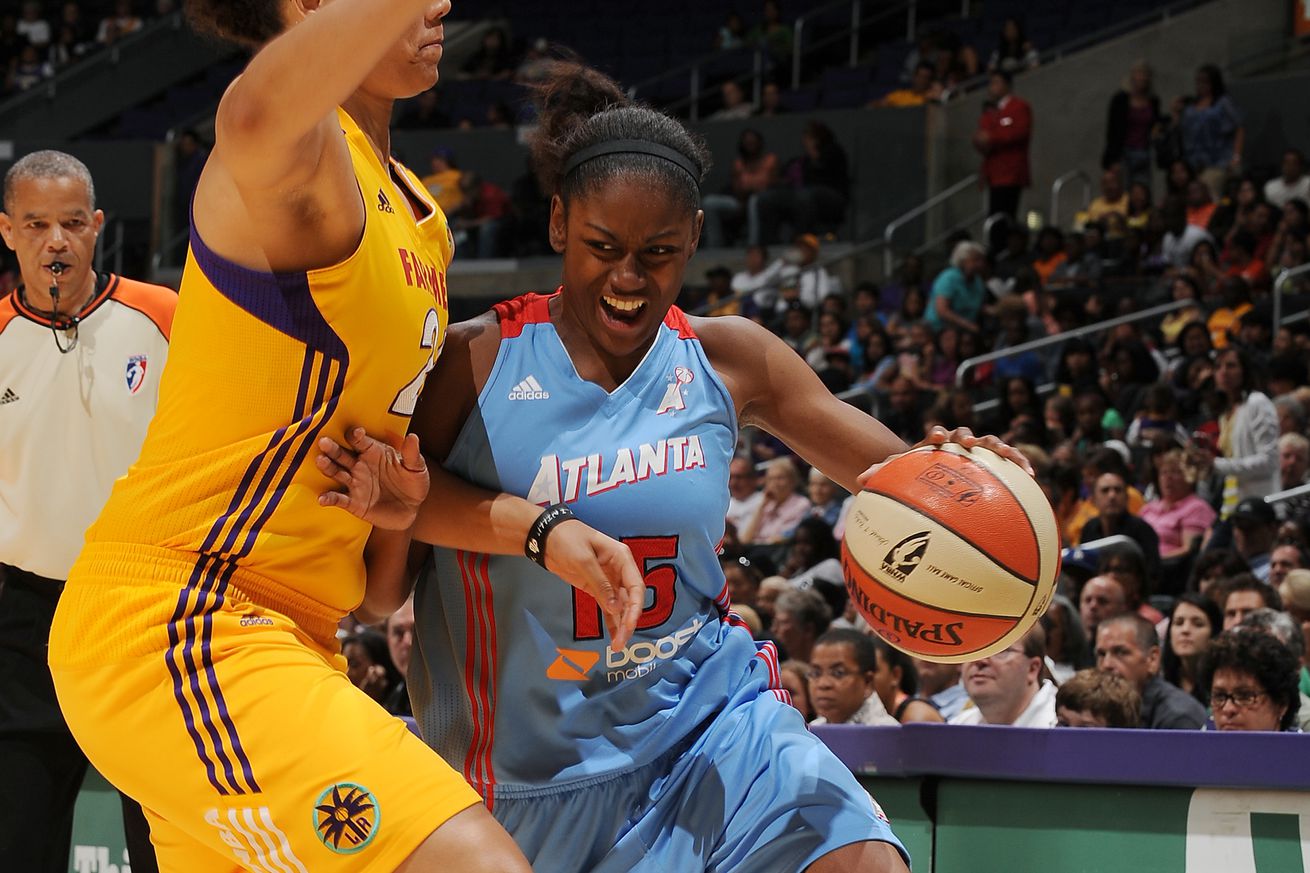 Tiffany Hayes fights her way to the hoop during her 2012 rookie season. | Photo by Juan Ocampo/NBAE via Getty Images

How did Tiffany Hayes drop to No. 14 in the 2012 WNBA Draft? Even as she contributed to multiple championship-caliber teams as a UConn Husky, her professional prospects were questioned. During her eight years with the Atlanta Dream, Hayes has proven to skeptics that she is a star.

Tiffany Hayes, the best No. 14 draft pick in WNBA history, is one of the most unique players in today’s game.

On offense, the lefty can sneak, snake, accelerate and explode to the hoop. By employing her elite athleticism in asynchronous ways, she has established herself as one of the league’s most effective isolation scorers. On defense, she successfully unleashes her athleticism to frustrate opponents, combining her length and speed to quickly turn persistent defense into transition offense.

In short, Tiffany Hayes is the type of player you don’t want to play against.

Curiously, it seems no team wanted her in the 2012 WNBA Draft.

How the heck did Hayes fall to No. 14, the second pick of the second round?

Hayes’ path to WNBA stardom, however, confirms her status as one of the league’s most unique players. She is the rare (oxymoronic, even) UConn underdog — underestimated despite evidence of excellence.

Ranked as the No. 11 prospect in the class of 2008 by HoopGurlz, Hayes strolled into Storrs, Connecticut, and claimed the No. 3 jersey last worn by Diana Taurasi.

On a team featuring sophomore Maya Moore, junior Tina Charles and senior Renee Montgomery, the freshman Hayes emerged as a key contributor. A 28-point performance in the Sweet Sixteen foreshadowed the explosive scoring ability she would flash throughout her UConn career. Though sharing the court with more heralded teammates, Hayes occasionally would turn in a big scoring output as the Huskies racked up another victory.

In addition to being a part of two national title teams during her first three years, Hayes also helped the Huskies achieve their all-time-best 88-game winning streak. Along the way, she became the fastest player to win 100 games in NCAA basketball history, winning her 100th game in her 101st outing as a junior in 2011.

WNBA intelligentsia overestimated Hayes’ draft stock and underestimated the impact she’d have in the WNBA.

UConn needed Hayes to be a scoring star for her senior season. More often than not, she delivered, turning in multiple performances worthy of the illustrious No. 3 jersey.

In January 2012, Hayes scored 35 points and 33 points in back-to-back games. Her 68 points in consecutive games is the best mark registered by a UConn Husky. These highs, along with a season-long average of 14.7 points, earned Hayes her third-team All-American honors.

Although she did not cap her UConn career with a third national title, Hayes finished in the top 10 in points, assists and games played, joining Diana Taurasi, Renee Montgomery and Maya Moore in attaining this achievement.

However, just like opponents tasked with guarding her, the intelligentsia of women’s basketball’s had trouble figuring Hayes out.

Mike Thibault, one of the most reputed evaluators of women’s basketball talent — then, head coach of the Connecticut Sun — suggested to the Hartford Courant, “Right now, I would list Tiffany as going somewhere between seventh and 12th overall. I think with her, the amount of success she has in the league may depend on the style the team that selects her plays. If she goes to the right team, she will be fine.”

He also underestimated the impact she would have in the WNBA.

Hayes heads to the ATL and rises

Of the 13 players drafted ahead of Hayes, only five (two of whom are now her teammates) still play in the WNBA. Only one — No. 1 pick Nneka Ogwumike — has a resume that exceeds Hayes’.

In other words, the Atlanta Dream should still be thrilled that other WNBA teams doubted Hayes’ pro potential.

Did you know @tiphayes3 @strick40 & @MISSVOL25 all were drafted in the 2012 @WNBA Draft? And how was Tiffany a second-round pick? ‍♀️#WNBADraft pic.twitter.com/WnW6zWvsGo

The Dream also deserve credit for providing the time and space for Hayes to develop into a WNBA star.

On Atlanta teams led by Angel McCoughtry, Hayes served as an occasional starter her first two seasons. She was an All-Rookie team honoree in 2012 and improved her counting and efficiency stats in 2013. After seeing limited action during the 2012 playoffs, she started the majority of games during the Dream’s run to the 2013 WNBA Finals, highlighted by a 23-point performance in Game 1 of the semifinals.

In 2014, Hayes became a full-time starter. Over the next three seasons, she settled in as the solid, secondary player predicted by Thibault. In particular, she had become one of the league’s most effective foul drawers, using her dribble-drive game to power into the paint and manufacture extra points at the free-throw line.

In 2016, she made the third-most free throws on the second-most free-throw attempts in the WNBA.

In 2017, Hayes took her career to another level. Somewhat recalling her senior season at UConn, she was tasked with carrying her team. With McCoughtry sitting out the season, the ball was in Hayes’ hands more often. The Dream had a less-than-impressive record that season but Hayes showed her star potential, averaging 16.3 points, 2.4 assists and 1.2 steals per game and earning an All-Star berth.

A ‘Dream’ season for Hayes and her team

Then, in 2018, everything appeared to coalesce perfectly.

McCoughtry was back, and she and Hayes formed a potent partnership on both ends of the floor. Even though their offensive games are not necessarily complementary, things worked. By the 2018 All-Star break, the Dream were rounding into a bona fide championship contender.

Yet, Hayes still was doubted. McCoughtry earned All-Star honors — Hayes did not.

The former Husky was unconcerned about the negligence of the WNBA’s coaches, who select All-Star reserves. “I wouldn’t mind being Batman, but Robin is something that I’m just used to,” she told SBNation. “That’s the role I’ve been playing my whole life. Maybe that’s why I’m always underrated and getting looked over.”

Nevertheless, her snub soon was seen as absurd.

After a knee injury ended McCoughtry’s season, the Dream did not falter. Instead, they maintained their impressive effort, all behind Hayes. For the 2018 season, she finished with a career-best PER of 19.9; posted averages of 17.2 points, 3.6 rebounds, 2.7 assists and 1.2 steals; and took Atlanta all the way to Game 5 of the semifinals.

Hayes also was named to the All-WNBA First Team.

What’s next for Hayes and the Dream?

The 2019 season marked a divergence from the path of improvement Hayes had traveled her entire career. Atlanta had a disastrous 2019 season and Hayes struggled with injury and inefficiency.

An underwhelming 2019 means Hayes is, yet again, underestimated.

Based on her history, we should be ready for something big from her in 2020.

The 2020 Dream can surround Hayes with shooters who can space the floor so that she can more effectively execute her speedy, shifty isolation game. Expect her to defy doubters and thrive as she drives the Dream back into the playoffs.

Other notable No. 14 picks