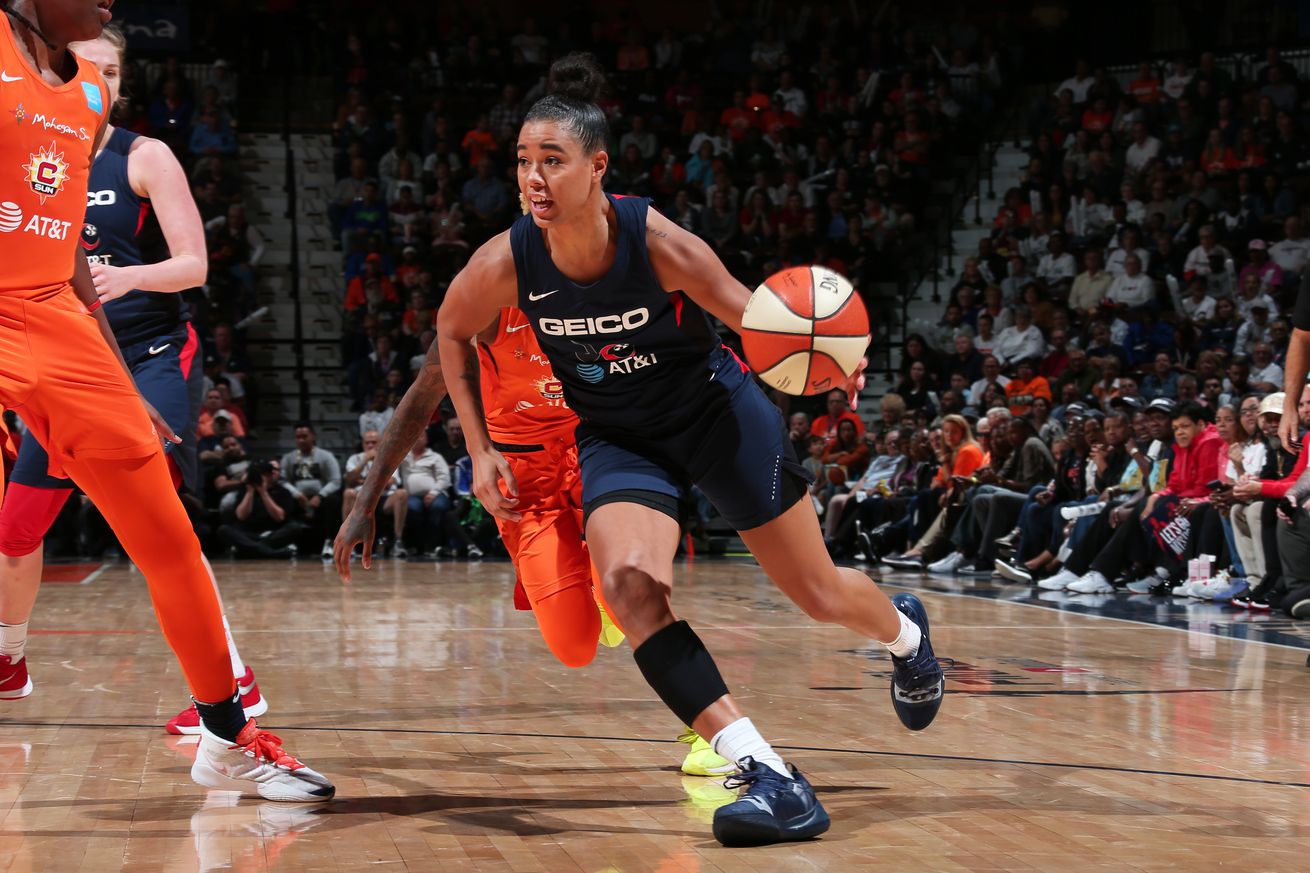 Natasha Cloud (with ball) is the best No. 15 pick of all time and is still on the rise. | Photo by Ned Dishman/NBAE via Getty Images

Natasha Cloud of the Washington Mystics was a member of the Maryland Terrapins and then the Saint Joseph’s Hawks in college. She was an underdog coming out of high school and was still an underdog after the 2015 draft. Now she is a WNBA star and champion.

Natasha Cloud was not a highly-ranked recruit coming out of high school, but she did sign with a big-name school in Maryland.

The No. 96 overall prospect for 2010 competed with No. 23 overall prospect Laurin Mincy and other guards for playing time as a Terrapin freshman. Although she showed flashes of potential with the Terps, she opted to transfer to St. Joseph’s in Philadelphia for her sophomore season. Cloud is from Broomall, PA, which is about a half-an-hour drive from the city.

As a senior, Cloud led the Atlantic-10 with 37.6 minutes per game, and last year in the WNBA she played 1,093 total minutes — good for fourth in the league.

Needless to say, Cloud has found plenty of playing time and, in retrospect, she could not have made a better decision for herself as a basketball player. She became a star at St. Joe’s and, after barely making the HoopGurlz Top 100 coming out of high school, went at No. 15 overall in the 2015 WNBA Draft.

The Washington Mystics, who selected Cloud, were coming off a 16-18 campaign in 2014 — head coach Mike Thibault’s second year with the team. However, the Mystics landed superstar Elena Delle Donne in 2017 and went to the WNBA Finals in 2018 before winning it all last year.

Cloud, who got a second chance to play in the Washington, D.C. area, guaranteed a win before the decisive Game 5 of the 2019 Finals. She proceeded to record 18 points, five rebounds and three assists in the victory. Helping her team win a championship in that fashion was enough to cement her legacy as a legendary DC athlete.

Highlights: Cloud plays her heart out in Game 5 of the 2019 WNBA Finals

Cloud, who is entering her sixth year in the league, has played her entire career with Washington. She played 19.3 minutes per game as a rookie with 22 starts. From there she gradually improved until reaching career highs with 9.0 points and 5.6 assists per game during the 2019 regular season. Those numbers rose to 13.1 and 6.2, respectively, in the playoffs.

Cloud’s driving, finishing and distributing skills are all top-notch and she is a good 3-point shooter, keeping opposing defenses honest. Her talents have made her the greatest No. 15 pick in WNBA history.

In addition to her on-court achievements, Cloud has been a vocal leader for societal change in general and also recently, following the murder of George Floyd. She has the leader gene and has put that to good use in arenas more important than basketball.

Cloud is the all-time leader in career points per game among No. 15 picks with 6.3. Guards Allison Hightower (6.1) and Roneeka Hodges (6.0) are not far behind, but Cloud has set herself apart from those two with her distributing numbers. She has averaged 4.1 assists per game for her career, which is also first among No. 15 picks and first out of all players from the 2015 draft. Hightower and Hodges averaged 1.6 and 1.1 assists over the course of their careers, respectively. Plus, Cloud is on the rise and her points per game average is bound to increase.

Hodges was drafted in 2005 and leads all No. 15 picks with 11 seasons played, though Cloud, who is 28 years old, will likely break that record. Hightower was drafted in 2010 and played six years in the league. Guard Debbie Black (from 1999) and forward Amanda Lassiter (from 2001) also played for six years and both put up solid stats. Black averaged 3.2 assists per game for her career.

Meanwhile, 2007’s No. 15 pick Shay Murphy is second behind Hodges with nine seasons played and 2011’s No. 15 pick Carolyn Swords of the Las Vegas Aces is third with eight. Swords is still active, as are 2018 draftee Monique Billings of the Atlanta Dream and 2020 draftee Leaonna Odom of the New York Liberty.