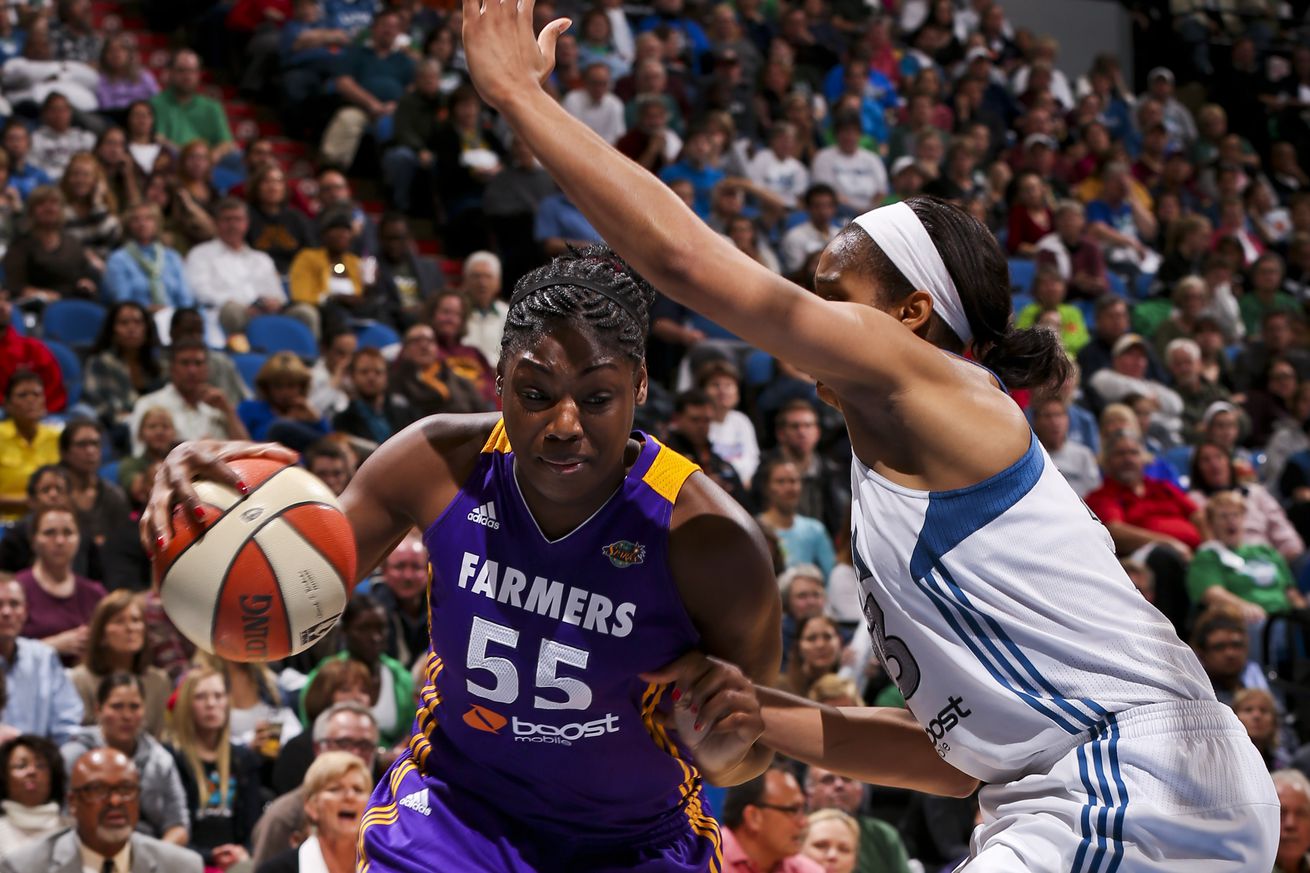 Nicky Anosike is the only No. 16 pick to be selected to a WNBA All-Star game. | Photo by Jordan Johnson/NBAE via Getty Images

There are a few players who may lay claim to the title of greatest No. 16 draft pick in WNBA history. Drafted in 2008, Nicky Anosike has had the most impressive career to this point, but players drafted in 2019 and 2020 may eventually usurp her.

Nicky Anosike was the No. overall 16 pick out of the University of Tennessee in the 2008 WNBA Draft by the Minnesota Lynx.

Anosike’s rookie season was promising as she was named to the 2008 All-Rookie Team. In her second season, Anosike averaged 13.2 points, was named to the 2009 All-Star Game, and the 2009 All-Defensive Team. Anosike would play three more seasons, never able to recapture her second-season success. Anosike finished with 139 games played and 122 starts, with a career scoring average of 8.9 points.

Sydney Colson was drafted in 2011 by New York Liberty, but left to play in Poland from 2012 to 2014, finally rejoining the WNBA in 2015 with the San Antonio Stars. Colson is entering her seventh season as a reserve point guard and has played 147 career games, the most of any No. 16 pick.

After five seasons with San Antonio and Las Vegas and scoring a career-high 17 points in 2019, Colson signed a contract with the Chicago Sky. Once Colson plays a seventh season, she will be the longest-tenured 16th pick in WNBA history.

Center Astou Ndour is coming off her best professional season after averaging a career-high 6.8 points and 4.2 rebounds in 2019. Ndour was traded from Chicago to the Dallas Wings after two seasons with the Sky. Ndour was originally drafted by the Stars in 2014. How she integrates with her new team will likely impact her ability to stay in the league.

Reshanda Gray was drafted in 2015 by the Minnesota Lynx, but was traded after 10 games to the Atlanta Dream. Gray scored a career-high 22 points in her second season with Atlanta. Gray played overseas before returning to the WNBA in 2019 to play for the New York Liberty. Gray was recently waived by New York, potentially cutting her WNBA career short after 89 appearances.

Highly-touted at Notre Dame, Jessica Shepard was drafted by the Minnesota Lynx in 2019 and was playing nearly 20 minutes per game. However, Shepard only appeared in six games before a torn ACL ended her rookie season.

Crystal Dangerfield was drafted by the Minnesota Lynx after an impressive career with UConn, joining her old college teammate Napheesa Collier. Dangerfield is a scorer, averaging 14.9 points and shooting 41 percent from beyond the arc in her last season in college. Dangerfield could have possibly competed for the starting job against Odyssey Sims if there had been a WNBA preseason in 2020.

The No. 16 pick appears to be reserved for career backup players that have short-lived careers. Shepard and Dangerfield are looking to buck that trend.

Rosalind Ross was drafted in 2002 by the Los Angeles Sparks after leaving Oklahoma as one of the best three-point shooters in Sooners history. In 2002, the No. 16 pick was in the first round of the draft. However, Ross never played due to knee injuries and was waived in May 2003.

Tragically, Ross was shot and killed in 2010 by her longtime girlfriend. Their relationship had become strained due to multiple factors. For the full story, read this feature piece ESPN did in 2012.