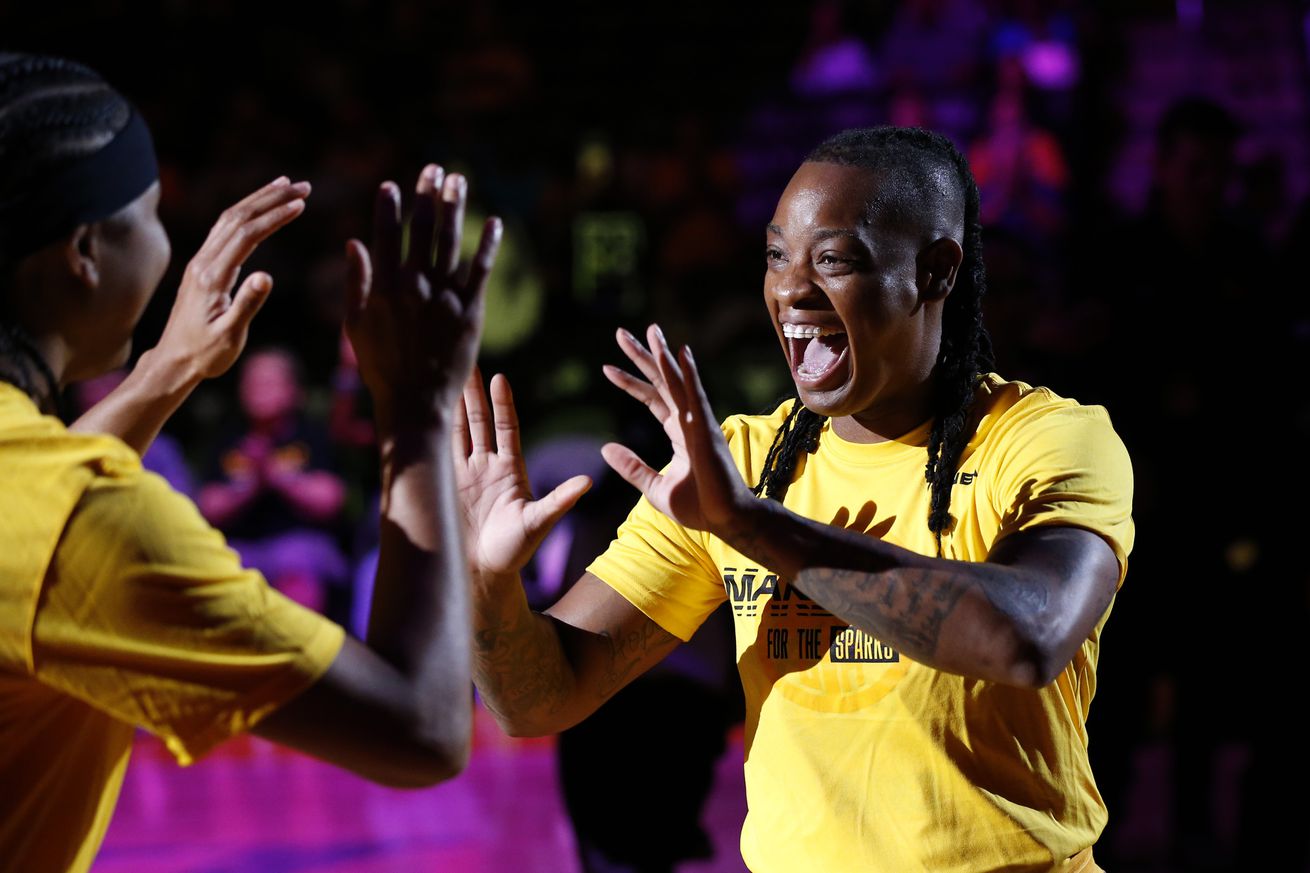 Riquna Williams (right) has put together a great career so far and hopes to add to her legacy while playing for the Sparks. | Photo by Katharine Lotze/Getty Images

Riquna Williams (Los Angeles Sparks), Camille Little and Alysha Clark (Seattle Storm) have put together the best WNBA careers out of all No. 17 picks. Erin Thorn and Helen Darling were also successful during their time in the WNBA, while Betnijah Laney is a No. 17 pick to keep your eye on for the future.

Riquna Williams of the Los Angeles Sparks has made the No. 17 overall draft spot a special one. Any player who gets drafted 17th can point to her and think “Hey, maybe I can drop 50 points in a game someday.”

Williams, a Miami Hurricane from the class of 2012, accomplished the feat with 51 points for the Tulsa Shock against the San Antonio Silver Stars on Sept. 8, 2013 — near the end of her second season in the WNBA. She went 8-of-14 from downtown en route to what was then a WNBA record for points in a single game, surpassing Diana Taurasi’s 47 points in 2006 and Lauren Jackson’s 47 points in 2007.

Liz Cambage, a No. 2 overall pick, topped Williams with 53 points in a single game in 2018. Williams’ 51 still hasn’t lost its luster though. And although she is not a superstar, Williams is one of the best players the WNBA has ever seen from the draft’s second round — and is probably the best No. 17 overall pick in league history.

Williams’ 51 points back in 2013 was not a fluke. Her best scoring average for a season is an impressive 15.6 points per game, accomplished in both 2013 and 2015. Her career 3-point percentage is 34.9 percent, but is on the rise after she shot 39.1 percent with 54 makes last year. To top it off, Williams is also a great free throw shooter — 86 percent for her career.

Williams has typically been a bench player, having started just 54 of her 179 games in the WNBA (30.2 percent). Meanwhile, small forward Alysha Clark of the Seattle Storm, also an active No. 17 pick (from 2010) has started 178 of 251 (71 percent). Those two, along with recently retired Camille Little, are arguably the three best No. 17 picks ever.

Little, a 6-foot-2 forward, started 76.1 precent of her games in the league and at this point holds the record for most seasons played by a No. 17 pick (13). She also put up solid rebounding numbers in her prime, which Williams — a 5-foot-7 guard — has not.

Little’s longevity as a No. 17 pick cannot be overlooked, nor can Clark’s consistently good and gradually improving performance over her eight years in the league. Clark was crowned a WNBA champion with Seattle in 2018, while Little helped lead the 2010 Storm to a ring.

Williams saw 25.8 minutes of playing time with the Sparks last year — good for the second-most minutes per game of her career, trailing only her 2015 All-Star campaign (28.0). If she continues to be a big part of the rotation, who knows; she may have another 50-point game in her. Her game-high points total from 2019 was 37.

After Little, the next two No. 17 picks with the longest careers are guards Erin Thorn (11 years) and Helen Darling (10 years).

Thorn, who was drafted in 2003 and played most of her career with the New York Liberty, had one really good year in 2007. She started in all 29 games she participated in that season and averaged 30.4 minutes, 9.7 points, 3.0 rebounds and 2.5 assists per game — all career-highs. However, over the course of her whole career she played 15.1 minutes per game, and her scoring average was 4.8.

Darling (4.1 career scoring average) had better assist numbers than Thorn with 2.8 helpers per contest on her career compared to Thorn’s 1.5. She was also a starter much more frequently than Thorn and averaged 19.8 minutes per game.

Darling was drafted by the Cleveland Rockers in 2000 and her best season came in 2001 when she scored 6.1 points and dished out 3.4 assists per game. She started all 32 games that year before starting all 34 games in 2003 — her last season in Cleveland. She went on to play for the Minnesota Lynx, Charlotte Sting and San Antonio.

Val Whiting-Raymond, 1999’s No. 17 pick, put up the next-best career averages after Williams, Little and Clark, but only played three years in the league. Her 6.5 points and 6.7 rebounds as a rookie with the Detroit Shock highlighted her career.

The No. 17 pick from 2001, Semeka Randall-Lay, cranked out 9.4 points per game as a rookie with the Storm, but left her playing days behind after just four seasons to pursue coaching. Randall-Lay is now the interim head coach of the Winthrop Eagles.

Laney signed a multi-year contract with the Fever on Feb. 14.

Meanwhile, Megan Gustafson, who was a huge star and a National Player of the Year for the Iowa Hawkeyes in college, fell all the way to No. 17 in the 2019 draft because many questioned if her skills would translate to the WNBA. She was drafted by the Dallas Wings, got cut and then re-joined the team mid-season. She only played 9.5 minutes over 25 games as a rookie, but snuck back onto Dallas’ roster this year. It will be interesting to see if she can add to the legacy of No. 17 picks.