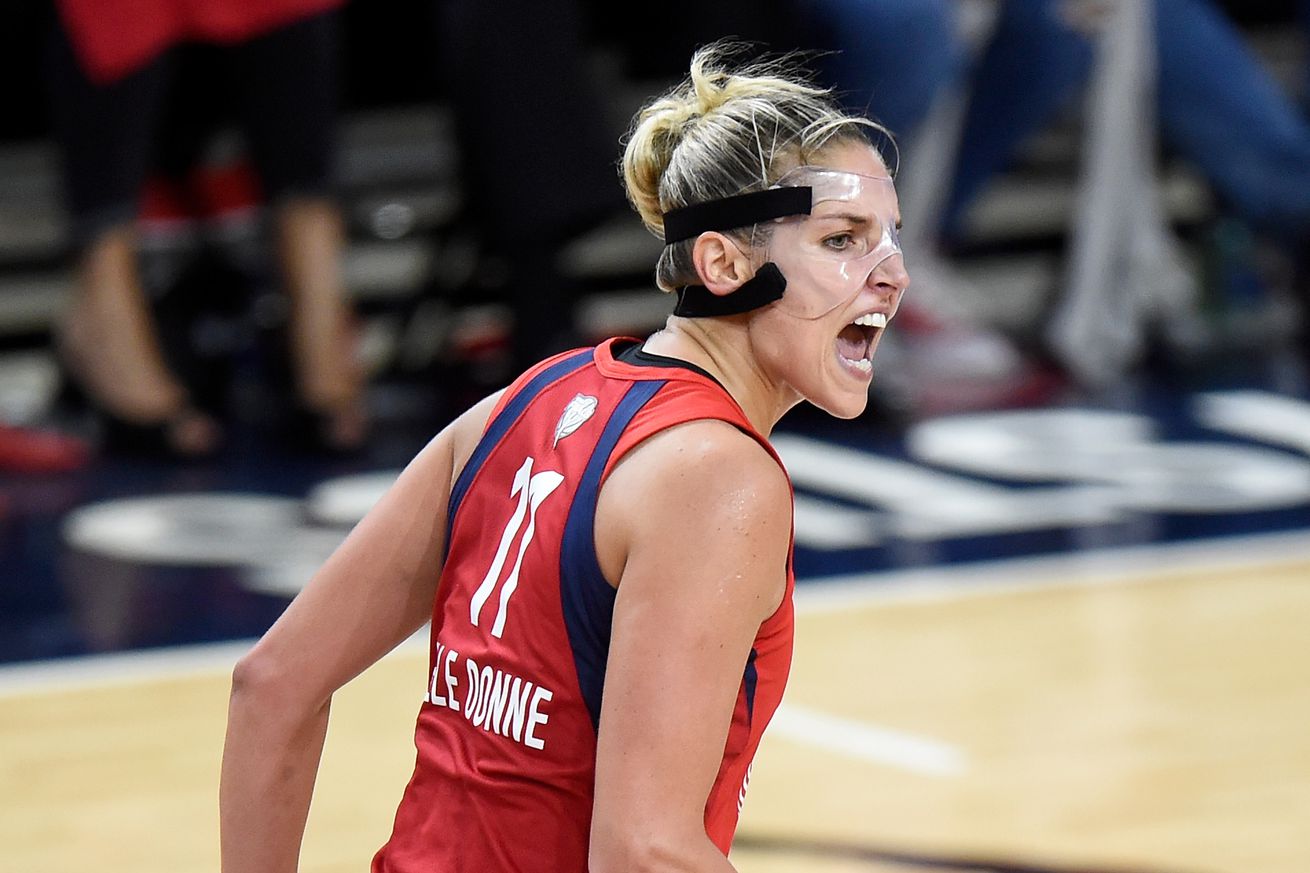 Elena Delle Donne didn’t play at a basketball powerhouse in college, but she is now one of the best players in the WNBA. | Photo by G Fiume/Getty Images

Elena Delle Donne has been a dominant force in the WNBA for the Chicago Sky and Washington Mystics. A third MVP award would tie her with Lisa Leslie, Lauren Jackson and Sheryl Swoopes for most all-time.

Elena Delle Donne is the best player from a 2013 draft class that included top pick Brittney Griner and No. 3 pick Skylar Diggins-Smith. She is also better than any other No. 2 pick in WNBA history, ahead of quite a few legendary players, including Yolanda Griffith and Cappie Pondexter.

Fowles and Cambage are very close to being as great as Delle Donne, but Cambage has only played four years in the states; the rest of her career has been played overseas.

That leaves Fowles as Delle Donne’s main competition for best No. 2 pick, and the phenomenal stats that the 6-foot-6 center has maintained over 12 seasons make it a close call. However, Delle Donne’s accomplishments over seven seasons are already enough to put her ahead of her former Chicago Sky teammate.

Delle Donne, who is from Wilmington, Delaware, originally signed with the UConn Huskies coming out of high school. However, she backed out of that to be closer to her family, returning to her home state to play for the Delaware Blue Hens. At Delaware she became a nationally recognized player.

During the 2012-13 NCAA season, Delle Donne was part of an unprecedentedly talented trio of college seniors called “The Three to See” along with Griner and Diggins-Smith. As was expected, Delle Donne went after Griner in the 2013 WNBA Draft, falling to the No. 2 spot where the Sky selected her.

The hype surrounding Griner, a 6-foot-8 center who was expected to be one of the best WNBA players ever, quickly shifted to Delle Donne during the 2013 WNBA season. Delle Donne took home the Rookie of the Year award and beat Griner in scoring average 18.1 to 12.6.

Delle Donne and Fowles helped lead Chicago to the 2014 Finals, where the Sky lost to the Phoenix Mercury. Delle Donne then won the MVP award in her third of four years with the Sky. Her repertoire of talent at 6-foot-5 is reminiscent of three-time MVP Lauren Jackson. She can shoot from anywhere on the floor and can drive and handle the ball like a guard.

Delle Donne returned close to home once again when she forced a trade to the Washington Mystics in 2017. She turned the 13-21 Mystics from 2016 into an 18-16 team in 2017. She then led them to the WNBA Finals in 2018, but due to a bone bruise wasn’t 100 percent during the series, and Washington ended up getting swept by the Seattle Storm.

Delle Donne is currently averaging 20.3 points and seven rebounds per game for her career and has made it to six All-Star Games — every one that has taken place since she was drafted. She will likely be in the greatest of all time mix, regardless of draft spot, when her career is over.

Ticha Penicheiro (1998) was the first No. 2 pick to achieve greatness. She wasn’t a big-time scorer, but averaged over seven assists in each of her first five years in the WNBA. She also helped lead the Sacramento Monarchs to a WNBA title in 2005.

Griffith, who was drafted in 1999 and was Penicheiro’s teammate in Sacramento, played from age 29 to 39 and won the MVP award as a rookie, when she averaged a career-best 18.8 points per game to go along with a career-best 11.3 rebounds. She was also a key member of the Monarchs’ championship-winning squad.

Swin Cash (2002) is tied with Penicheiro for most seasons played as a No. 2 pick with 15. She averaged 10.7 points and 5.3 rebounds over the course of her storied career, which included two championships with the Detroit Shock. Cash picked up a third title in 2010 as a member of the Seattle Storm.

Alana Beard (2004) played 14 years in the league and was a phenomenal defender for the Mystics and Los Angeles Sparks. She made the WNBA All-Defensive Team nine times and took home the Defensive Player of the Year award in 2017 and 2018. She was also a great scorer early in her career, averaging double-figure points in each of her first seven seasons.

Highlights: Some of the best moments from recently-retired Alana Beard’s career

Out of all retired players drafted at No. 2, Pondexter (2006) is up there with Griffith as arguably the best. She played 13 seasons in the league with career scoring and distributing averages of 16.4 points and 3.8 assists, respectively. She averaged over 20 points per game three times and, like Griffith, was selected to seven All-Star games. She also won two championships as a member of the Phoenix Mercury, the team that drafted her.

Fowles has Delle Donne beat in career rebounds (9.8) and blocks (1.8) per game. She trails her former teammate in points per game, though, with 15.8. The 6-foot-6 center out of LSU has been to six All-Star games, including each of the past three, and won the MVP award in 2017.

Fowles spent seven years in Chicago before joining the Minnesota Lynx in 2015 and winning two championships and two Finals MVP awards with them. She added even more talent to a Lynx team that featured a “big four” of Maya Moore, Seimone Augustus, Lindsay Whalen and Rebekkah Brunson and is Minnesota’s best player now that all four have moved on from playing with the Lynx — for now. Brunson is still with the team as an assistant coach and Moore could still return to the league if — and when — she is finished with her work in criminal justice reform.

Cambage, a 6-foot-8 center, played three seasons with the Tulsa Shock/Dallas Wings franchise and spent 2019 with the Las Vegas Aces. She nearly won the MVP award in 2018, when she averaged 23 points and 9.7 rebounds per contest, and holds the WNBA record for most points in a single game with 53.

Odyssey Sims (2014) is a gifted scorer who most recently played for the Lynx in 2019. She will miss the 2020 season on maternity leave, but the 27-year-old will likely return to the WNBA and do some more damage.

Kelsey Mitchell (2018) averaged 12.7 and 13.6 points per game in her first and second years in the league, respectively, and has the potential to become a great player.

Lastly, 2020 draftee Satou Sabally of the Dallas Wings could join this illustrious list of the best No. 2 picks ever. She is an athletic 6-foot-4 forward with a great all-around game and is expected to make an immediate impact this season.