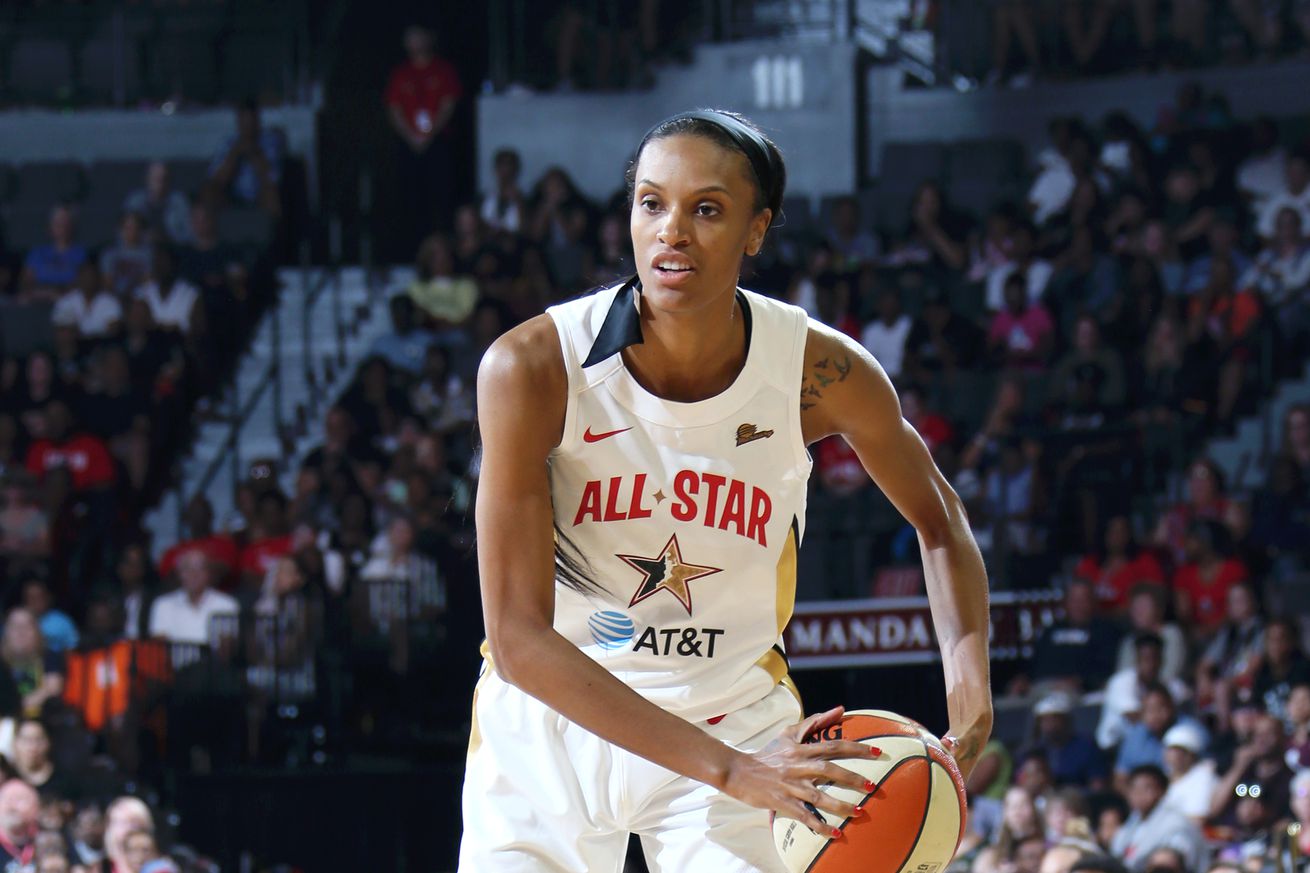 A 2019 All-Star selection is just one of the reasons why DeWanna Bonner is the best No. 5 pick in WNBA history. | Photo by Melissa Majchrzak/NBAE via Getty Images

The No. 5 pick in the WNBA draft has produced many excellent players, from Ruth Riley to Natasha Howard to Arike Ogunbowale. However, one player has compiled a career that stands out above the others: DeWanna Bonner.

Together, No. 5 picks in the WNBA Draft have compiled quite the resume:

However, among all this excellence, one No. 5 pick stands out above the others: DeWanna Bonner.

The iron-woman excellence of DeWanna Bonner

Selected by the Phoenix Mercury in the 2009 WNBA Draft, Bonner’s resume speaks for itself.

She is also the WNBA’s ultimate iron woman. In seven of her nine seasons, Bonner has played all 34 regular-season games. She has also led the league in minutes played twice, including in 2018, her first season back from maternity leave. Last season, she was second in minutes played.

In short, Bonner is not slowing down; she is doing more and getting better. It is understandable that the Connecticut Sun prioritized bringing her Uncasville (or, for the 2020 season, IMG Academy), envisioning her as the potential championship-clinching piece.

But before considering what Bonner might do for the Sun, it is worth celebrating her career thus far.

Bonner was awesome at Auburn

The Fairfield, AL native capped an already stellar collegiate career at Auburn University with a spectacular senior season, situating the Tigers in the national title conversation. Her list of season accomplishments included SEC Player of the Year, WBCA All-American and SEC scoring leader.

However, the clearest indication of Bonner’s impact on Auburn women’s basketball might have been a January 2009 home game against the Tennessee Lady Vols. An Auburn basketball record 12,067 fans watched Bonner and the Tigers dismantle the Lady Vols, 82-68 in their first victory over Tennessee in 12 years.

Bonner finished with the absolutely fantastic line of a career-high 35 points, nine rebounds and six steals. After the game, her head coach Nell Fortner insisted to the Opelika-Auburn News, “DeWanna Bonner is a big-time player.”

These words also forecast the professional career of the player Auburn basketball legend Charles Barkley, the “round mound of rebound,” would describe as “the un-round mound” in a conversation with the Birmingham News.

Yes, Bonner’s size deceives. While possessing enviable length, she appears too lean, even too frail, to assert her will on the court. Yet as early as her rookie season, Bonner would belie the seeming limitations of her lithe frame, displaying an intensity and insistence that would make her an influential piece on one of the WNBA’s best teams.

Joining a 2009 Phoenix Mercury team that featured the “Big 3” of Diana Taurasi, Cappie Pondexter and Penny Taylor, as well as Tangela Smith and Temeka Johnson, the rookie Bonner would not have the opportunity to earn a starting spot. Instead, she would style herself as a super sixth woman.

Bonner won the first of her three consecutive Sixth Woman of the Year Awards her rookie season.

In her WNBA debut, she tallied 16 points and 11 rebounds, a preview of the contributions she would make throughout her rookie season. Bonner used her length and sneaky strength to establish herself as the Mercury’s best rebounder. She not only led the team in rebounds with 5.8 per game, but also set the records for most single-season rebounds by a Mercury reserve and most single-season rebounds by a Mercury rookie. She also led all WNBA rookies with five double-doubles.

Unsurprisingly, her play inspired plaudits from teammates and coaches.

Diana Taurasi enthused to the Birmingham News, “She’s just wiry strong….The way she plays, the way she explodes off the court, how quick she is — she doesn’t even give people the opportunity to touch her.”

Then-Phoenix head coach Corey Gaines also shared compliments with Bonner’s hometown paper, noting, “She’s a versatile player…We don’t call any plays for her. She gets hers off her hustle, her rebounds, put-backs. She’s a hustle player.”

And, oh yeah, the Mercury won the 2009 WNBA championship, with Bonner chipping in 13 points in the title-winning game.

The emerging dominance of DB

In 2012, after having collected her trio of Sixth Woman of the Year Awards, Bonner became a starter.

While it was an overall rough season for the Mercury due to injuries and the Olympic break, it was a transformative season for Bonner, as she had the opportunity to serve as the squad’s No. 1 scoring option. She averaged 20.9 points per game, the second-best mark in the WNBA for the 2012 season, along with adding 7.2 rebounds, 2.2 assists and 1.7 steals.

She also demonstrated her competitive spirit. In early September, after the Mercury got mowed over by the New York Liberty, Bonner refused to allow her fledgling team to quit on the season, scoring 35 points and grabbing seven rebounds to power the Mercury past the league’s best team, the Connecticut Sun.

This performance and others encouraged coach Corey Gaines to imagine how Bonner’s improvement would boost a fully-healthy Mercury team during future seasons, telling the Associated Press, “DeWanna is the main thing, she is coming into her own, she’s a superstar now, she probably demands a double team. She’s another player to throw into the mix when we get our players healthy.”

Although Gaines would be replaced with Sandy Brondello after the 2013 season, his vision for Bonner and the Mercury would be realized. Bonner was integral to the 2014 Mercury not only becoming WNBA champions, but also the best WNBA team of the 2010s.

The following season, with Diana Taurasi sitting out due to a well-compensated request by UMMC Ekaterinburg, Bonner functioned as Phoenix’s force, leading the Mercury to a 20-14 record and the Western Conference Finals as she earned her first All-Star selection and All-Defensive honors. Bonner, in short, affirmed that she was the epitome of a two-way star.

The skinny yet strong super mom

Bonner would follow up her accumulating on-court success with two off-court achievements. She and Candice Dupree, the best No. 6 pick in WNBA history, confirmed their status as a basketball power couple when they married after the 2016 season. Soon thereafter, Bonner announced that she was pregnant with twins and would miss the 2017 season.

Even as family obligations presented challenges that could, understandably, effect the trajectory of her career, Bonner appeared unfazed, instead exceeding her already-established excellence when she returned to the court for the 2018 season.

With Bonner back and better than ever, the Mercury were again legitimate championship contenders. Along with Taurasi and Brittney Griner, Bonner formed Phoenix’s new “Big 3.”

As noted above, Bonner led the league in minutes played in 2018, ranking in the top 20 in scoring, rebounding, assists, steals, field goal percentage and free throw percentage as she earned her second All-Star selection.

Phoenix, unfortunately, would fall short of a title, taking the eventual-champion Seattle Storm to the brink in a thrilling five-game Conference Finals face-off. The Storm’s MVP and Finals MVP Breanna Stewart described the difficulty of dealing with Bonner, telling ESPN, “She has the dribble-drive capabilities, and she has deep range. So you have to somehow try to combat the two. Don’t let her shoot a long 3 uncontested, but also don’t get too close, because then she’ll go past you.”

The Mercury thus entered the 2019 season with title aspirations, with Bonner also having MVP intentions. However, inconsistencies soon stalled Phoenix’s ambitions. While Bonner turned in many excellent performances, the extended absence of Taurasi due to back surgery, in combination with other Mercury injuries, resulted in a disappointing season. Bonner would make her second-straight, and third overall, All-Star team.

During the furious free agency of February 2020, Bonner decided to depart the desert and take her talents to southeast Connecticut, trading Mercury burnt orange for the Sun’s brighter orange and, she hopes, brighter championship prospects.

Even with Jonquel Jones choosing to sit out the uncertain 2020 season, the Sun should still be contenders, in large part due to Bonner’s ability to assume a larger load (presuming she decides to play).

The Sun should sport an elite defense, with Bonner combining with Alyssa Thomas, Jasmine Thomas and Briann January to stifle offenses. And just imagine the damage that the terrifyingly athletic tandem of Bonner and Alyssa Thomas might inflict on opponents all over the floor.

In short, we can’t wait to see what the best No. 5 pick in WNBA history has in store for this season.