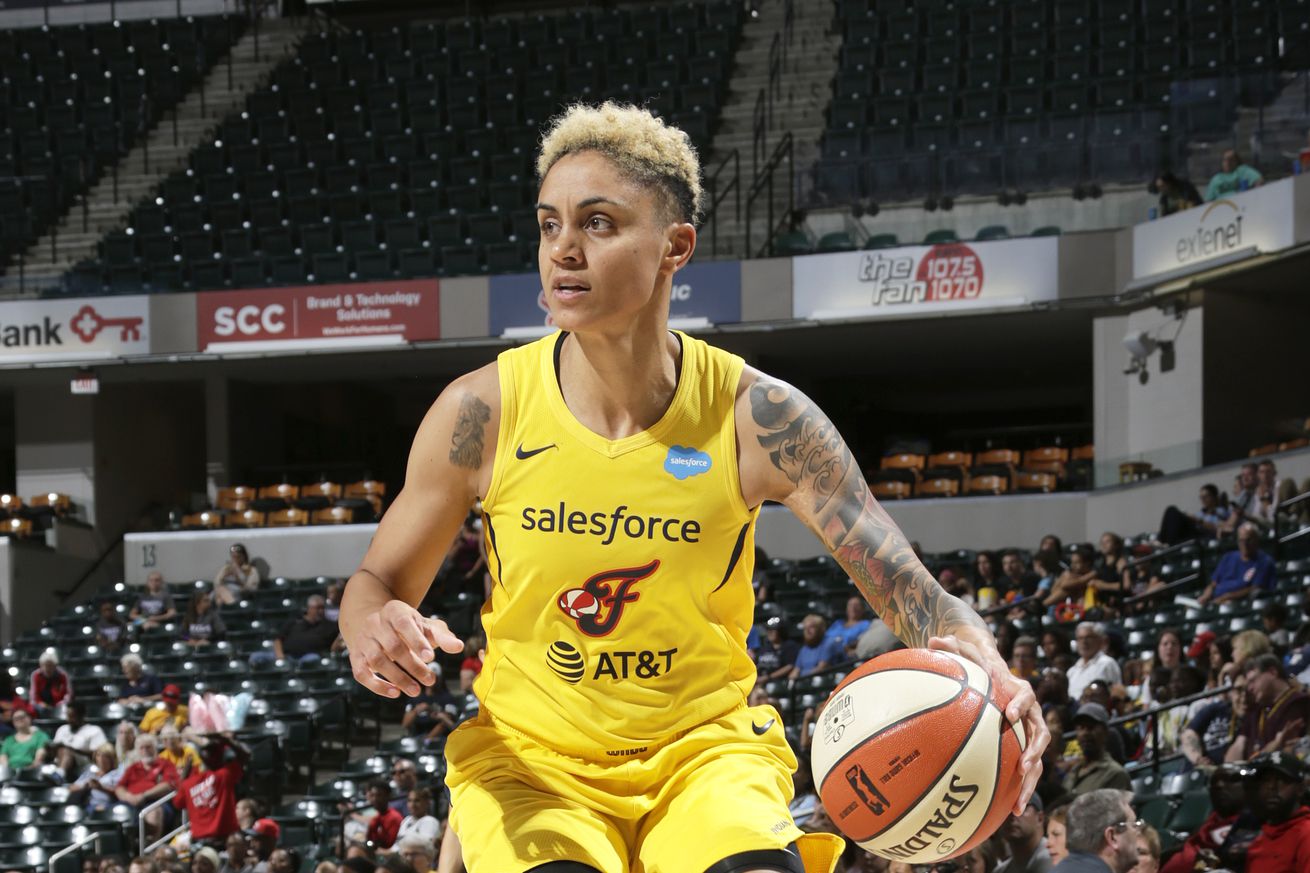 Candice Dupree is currently at the third stop of her long and storied WNBA career, where she’s the veteran leader of a rebuilding Indiana Fever squad. | Photo by Ron Hoskins/NBAE via Getty Images

Candice Dupree’s name tends to get lost in the shuffle when discussing WNBA greats, but her resume stacks up among the best. The 2006 draftee has been nothing short of solid during her 14 WNBA seasons.

When you think of the most consistently productive players in the WNBA, who comes to mind?

Diana Taurasi, no doubt. Tamika Catchings is probably up there as well, alongside other all-time greats such as Lauren Jackson, Lisa Leslie and Sue Bird. You could also mention more contemporary stars such as Maya Moore, Candace Parker, Elena Delle Donne and Sylvia Fowles and get no pushback. The list could go on for quite some time.

There’s one player, however, that seems to be overlooked on a regular basis — one who has quietly put together one of the longest, steadiest and most productive careers in WNBA history.

It’s Candice Dupree, the No. 6 overall pick in the 2006 WNBA Draft. And it’s past time she gets her due.

Things started modestly enough for Dupree. The Temple product was chosen as the Chicago Sky’s first-ever draft pick, and while she quickly became the Sky’s workhorse, averaging a team-high 30.4 minutes and 13.7 points per game, her accomplishments were greatly overshadowed by those of fellow 2006 draftees Seimone Augustus and Cappie Pondexter. The Sky struggled mightily in their inaugural season, though Dupree was sent to the WNBA All-Star Game as Chicago’s lone representative.

The song remained the same for both the Sky and Dupree in following seasons. Chicago amassed a wholly unimpressive 47-89 record in its first four years as a WNBA franchise, while Dupree continued to be its lone bright spot. Her workload with the Sky continued to grow — peaking at a ridiculous 34.9 minutes per game in 2009 — and she was named to two more All-Star games thanks to a smooth and steady face-up game that would eventually become iconic.

In spite of the individual accolades, Dupree grew tired of playing for the Sky, and asked for a trade after the 2009 season. A massive three-team deal between the Sky, Phoenix Mercury and New York Liberty was assembled, and Dupree was sent to Phoenix — a team that was coming off two WNBA championships in three seasons and had the competitive roster Dupree sought to be a part of.

While such numbers are not exactly sustainable across multiple seasons, Dupree established herself as one of the league’s most efficient — and consistent — scoring forwards during her time with the Mercury. Save for an injury-plagued 2012 campaign in which Dupree appeared in just 12 games, she shot no worse than 51 percent in each of her seven seasons in Phoenix and averaged at least 14 points per game on a routine basis. Dupree’s skill with and without the basketball meshed perfectly with dynamic scorers Taurasi and Penny Taylor, and when the Mercury drafted Brittney Griner in 2013, Dupree’s life as an off-ball shooter became even easier.

Dupree’s time in Phoenix peaked in 2014 when she started all 34 regular-season games for a Mercury team that went 29-5 — to date, the best regular-season record in WNBA history. Per Basketball Reference, the 2014 Mercury led the league in both offensive and defensive efficiency, with Dupree chipping in 14.5 points per game on 53.3 percent shooting. Phoenix breezed through the playoffs, sweeping the Chicago Sky in the Finals and winning the championship on Dupree’s former home floor at UIC Pavillion.

Dupree spent two more seasons in Phoenix before being traded to the Indiana Fever. With the trade came another role change. Dupree, then 32 years old, would have to embrace more of a veteran leadership role for the Fever, who were beginning a rebuilding phase.

While Dupree’s basketball IQ and methodical style of play makes for a great example for young players, her time in Indiana has been much more than that of a “locker room coach” who is on her way out. She picked up two more All-Star nods in 2017 and 2019 — bringing her total to seven — while bringing her usual reliability, appearing in 99 of a possible 102 games over three seasons.

Dupree will turn 36 years old this August, and with young stars Teaira McCowan and Lauren Cox projecting to be the Fever’s frontcourt of the future, it’s entirely possible that Dupree’s impressive run as a starting-caliber WNBA player is coming to an end.

But what a run it’s been. Last season, Dupree moved into second place in WNBA history in field goals made, passing Tina Thompson and ranking ahead of nearly every other player commonly cited as an all-time great. She’s appeared in 446 total WNBA games — 13th in league history — and has never averaged fewer than 11 points per game in any of her 14 WNBA seasons. She’ll also enter the 2020 season tied with Katie Smith for the fifth-most total points scored.

Dupree may not have experienced the individual highs of other WNBA greats, but her resume is impossible to discredit. She’s gone from being the centerpiece of a budding WNBA franchise to an integral cog in an offensive machine, and it would only be right if she comes full-circle to lead a young core of players to success their pro team has not seen in years. Dupree may not be commonly considered as an all-time WNBA great, but perhaps it’s time we rethink that.