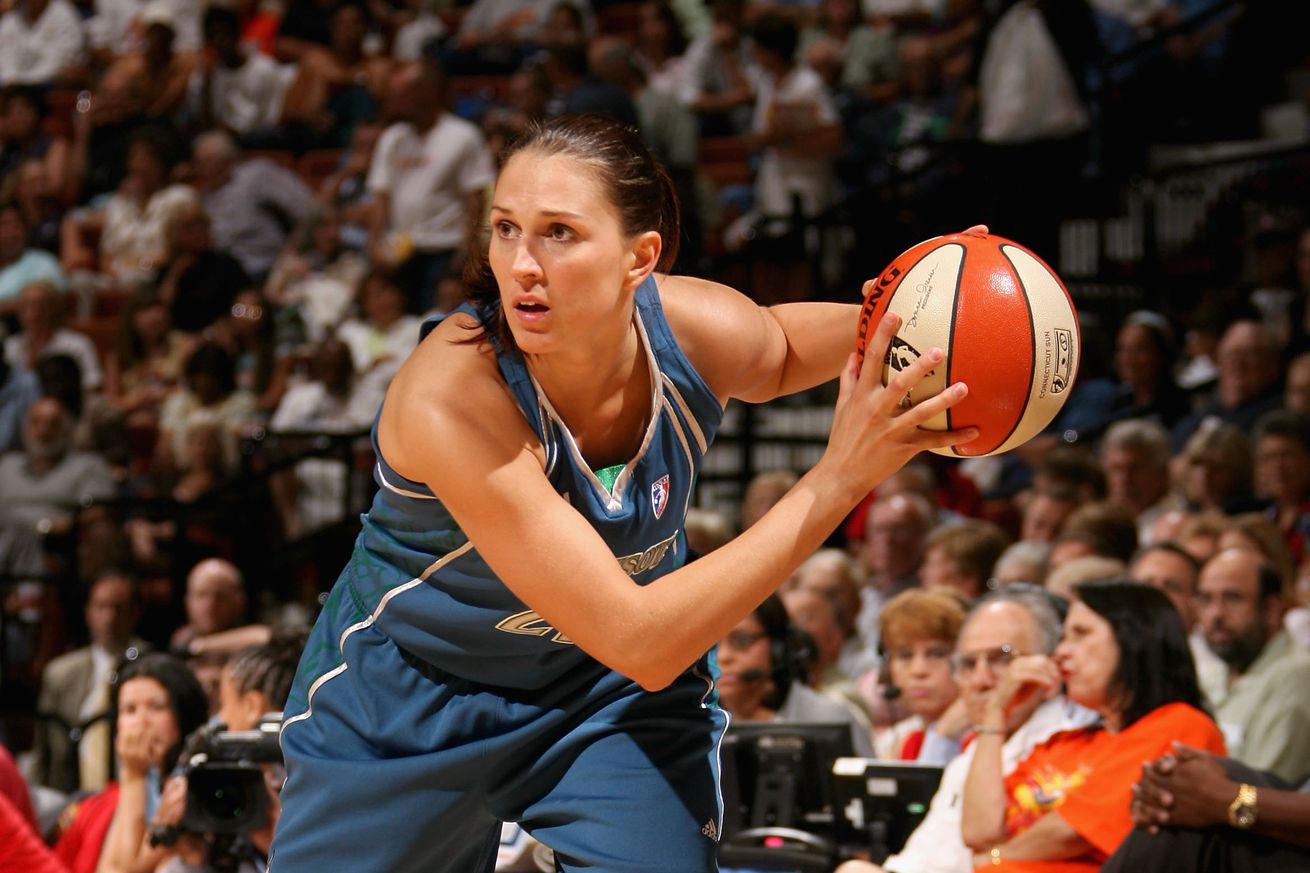 Svetlana Abrosimova spent the best years of her career in Minnesota. | Photo by Ned Dishman/NBAE via Getty Images

The Minnesota Lynx drafted Svetlana Abrosimova at No. 7 in 2001 and she burst onto the scene. However, a handful of currently active players are representing the No. 7 spot better than any group from the past.

Svetlana Abrosimova was drafted by the Minnesota Lynx as the No. 7 overall pick in 2001 and spent 10 years in the WNBA, including seven with Minnesota. The 6-foot-2 forward averaged 9.2 points and 4.1 rebounds per game for her career.

Abrosimova’s stellar 2007 season was her last with the Lynx, as she joined the Connecticut Sun in 2008 before playing for the Seattle Storm in 2010 and 2012. The 2010 season was her last productive one. It saw her play in all 34 regular season games and average 7.1 points per game. She also made 38 threes at a 37.6 percent clip that year and went on to average 15.1 minutes per game during the postseason, helping the Storm win their second WNBA title.

Kara Braxton, who was drafted by the Detroit Shock in 2005, also played 10 seasons in the league and made it to the All-Star Game in 2007. Her career averages (7.6 points and 4.7 rebounds) fall just shy of Abrosimova’s when combined, but Braxton did win two championships to Abrosimova’s one.

Essence Carson, a 6-foot guard/forward is also in the mix for best player selected at No. 7. The 2008 draftee began her career with the New York Liberty, played eight seasons in The Big Apple and played 12 total seasons — the most out of any No. 7 pick. Carson was also with the Los Angeles Sparks for three seasons and was last seen as a member of the Phoenix Mercury in 2019. She was an All-Star in 2011 and averaged a career-best 14.3 points per game in 2013.

Another solid No. 7 pick, 6-foot-4 center Courtney Paris, was drafted by the Sacramento Monarchs in 2009 and played 10 seasons in the league. She bounced around from the Monarchs to the Atlanta Dream, Tulsa Shock, Dallas Wings and Storm. Paris averaged over five points just three times in her career, but averaged an impressive eight-plus rebounds three times as well. In 2014 she nearly averaged a double-double with 9.2 points and 10.2 boards. She played just 6.3 minutes per game for the Storm last year.

Active No. 7 picks to keep an eye on

Guard Bria Hartley (2014) made an immediate impact for the Washington Mystics as a rookie with 9.7 points and 3.1 assists per game. She started just five games over the next two seasons in DC, but has found consistency in her home state of New York since arriving in 2017.

Guard/forward Kahleah Copper (2016) has also been a consistent contributor through her first four seasons. She was drafted by Washington, but has played for the Chicago Sky the past three seasons. She has averaged nearly the same amount of points and minutes in each season and her career averages sit at 6.7 points and 15.3 minutes.

The talent at the No. 7 spot peaked recently with guards Brittney Sykes (2017) and Ariel Atkins (2018) going to the Dream and Mystics, respectively. Both players have a good shot at surpassing Abrosimova. Sykes recorded 13.9 points per game as a rookie and has an 11.3 career scoring average as she transitions to LA for the 2020 season.

Atkins has been a steady force from distance for the Mystics with 96 makes and a 35.7 shooting percentage. The former Texas Longhorn also averaged 15.2 points over nine playoff games in 2018, helping lead the Mystics to a WNBA Finals appearance. Washington then won its first WNBA title last year with Atkins averaging a solid 7.3 points in the postseason.

The Sparks’ Kalani Brown (2019) has yet to prove herself in the same way that Sykes and Atkins have, but the sky is the limit for the 6-foot-7 center out of Baylor.

The No. 7 pick from the 2020 draft, Tyasha Harris, also has a bright future after leading the South Carolina Gamecocks to a No. 1 national ranking at the end of the 2019-20 NCAA season.

Harris, who is known as a distributor, was drafted by the Dallas Wings, a team featuring many players who were gifted scorers at the college level, including Arike Ogunbowale, who was third in the WNBA in scoring last year as a rookie. Expect Harris to find success on a young team with plenty of weapons to get the ball to.