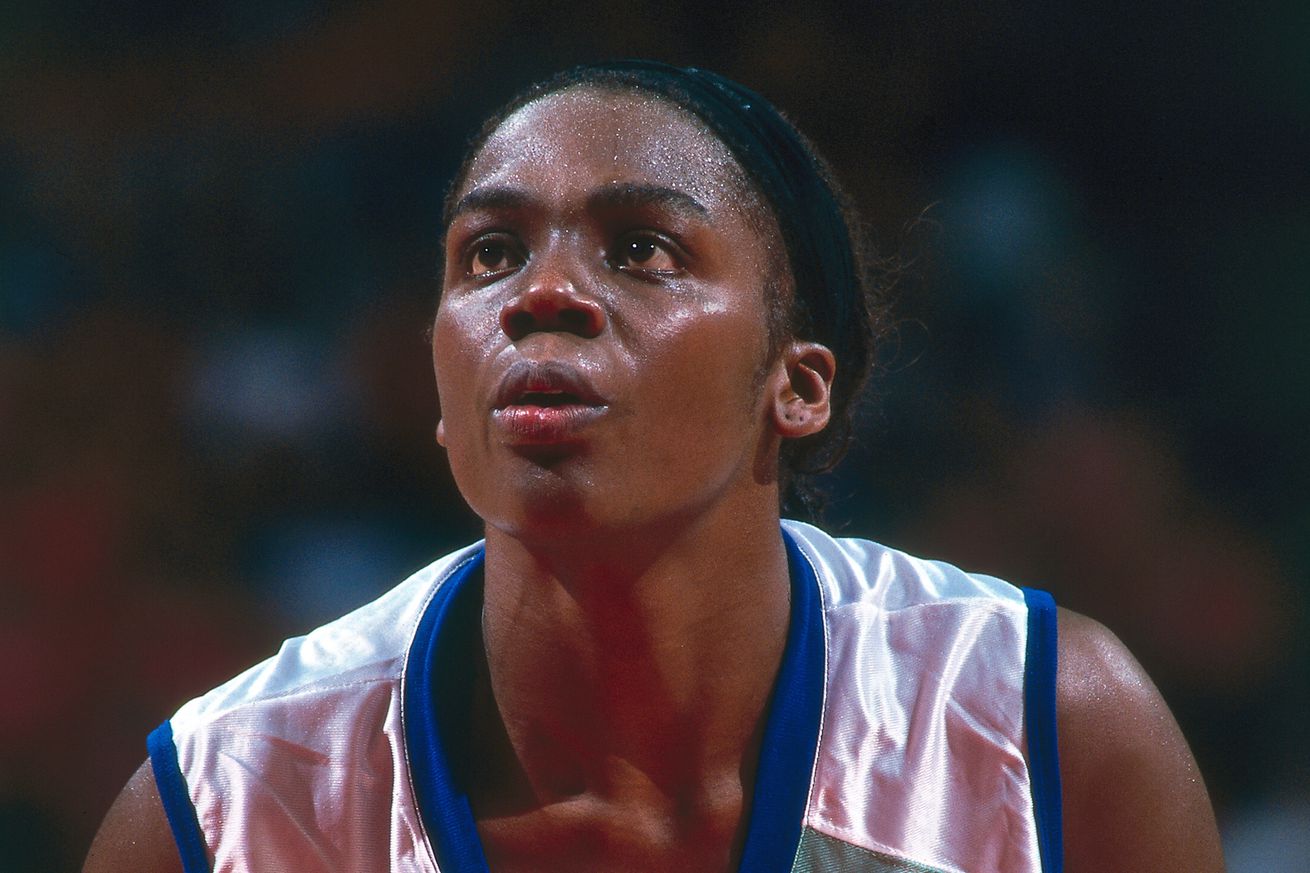 Tari Phillips was one of the first stars of the New York Liberty, a team whose championship aspirations in the late 90s and early 2000s went unfulfilled. | Photo by Fernando Medina/NBAE via Getty Images

Former New York Liberty star Tari Phillips edges Marie Ferdinand-Harris as the all-time best No. 8 WNBA Draft pick. Although the longevity of eighth picks Tamera Young and Kia Vaughn is impressive, and Courtney Williams could surpass everyone eventually, Phillips gets the nod.

Tari Phillips’ WNBA career was highlighted by four-straight All-Star appearances from 2000 to 2003. The No. 8 overall WNBA Draft pick in 1999, Phillips averaged double-figure scoring in each of her All-Star seasons, including a high of 15.3 points per game in 2001. The 6-foot-2 forward/center also averaged at least seven rebounds and 1.5 steals during the stretch with highs of 8.5 and 1.9, respectively.

Phillips’ rebounding numbers separate her from 5-foot-9 guard Marie Ferdinand-Harris, the No. 8 pick in 2001, who played 10 seasons in the league (one more than Phillips) and made it to three All-Star Games. Ferdinand-Harris’ job wasn’t to get rebounds, but her low 1.7 assists per game average was not enough to merit all-time-best status.

Phillips’ career scoring average of 9.2 points per game doesn’t blow you away, and neither does her 22.9 minutes per game or 141 starts. Additionally, in the five other seasons of her WNBA career, Phillips failed to score in double figures. She posted 4.1 points per game as a rookie with the Orlando Miracle and then, after her double-digit All-Star streak, her numbers declined to 6.7 points and 5.4 boards per game in 2004, the last of five seasons she spent with the New York Liberty.

Phillips’ career then fizzled with decreased playing time over three seasons with the Houston Comets.

However, Phillips could have completed a much better career if not for a broken right shooting hand that limited her to 13 games in 2004 and abruptly ended her streak of All-Star appearances. And, to her credit, she was the leading scorer on three Liberty teams that made the playoffs, including the 2000 and 2002 squads that made it to the WNBA Finals. She averaged 16.3 points and 7.6 rebounds during the 2000 playoff run and was good for 14.4 points and 5.9 rebounds in 2002.

Phillips was named the WNBA’s Most Improved Player in 2000; she was an All-WNBA Second Team honoree in 2002.

Ferdinand-Harris is a close second-best No. 8 pick considering her 205 career starts, 24.2 minutes per game and 9.8 career scoring average. She had a much better rookie season than Phillips and averaged double-figure scoring for the first five seasons of her career. Like Phillips, her numbers fell off from there, but Ferdinand-Harris had some very good playoff performances though came up short of making the Finals.

Tamicha Jackson (2000) played seven years and Kayla Alexander of the Minnesota Lynx, drafted in 2013, will appear in her eighth season this year. Three No. 8 picks (Maria Stepanova, Deanna Jackson and Katie Mattera) played five seasons in the WNBA, with the 6-foot-8 Stepanova averaging just north of 10 points per game in two of her seasons.

Watch out for Courtney Williams

Atlanta Dream guard Courtney Williams has yet to appear in an All-Star Game but her stats are on pace to make her the best No. 8 pick of all time.

Drafted by the Phoenix Mercury in 2016, Williams spent three-and-a-half seasons with the Connecticut Sun, a stretch that culminated with her playing a huge role in the team’s run to the WNBA Finals in 2019. The Sun lost the five-game series against the Washington Mystics.

Williams’ high-energy play was critical to the Sun, and she averaged a career-best 13.2 points per game in the 2019 regular season. Her 3.8 assists per game also were a career best. A strong rebounding guard, Williams averaged 5.9 rebounds in 2018 and 5.6 in 2019.

Now, back in her home state of Georgia, the 26-year-old Williams is poised to become an even bigger star.

Victoria Vivians, drafted by the Indiana Fever in 2018, is a player to watch as well. She averaged 8.9 points as a rookie before missing the 2019 season due to a torn ACL.