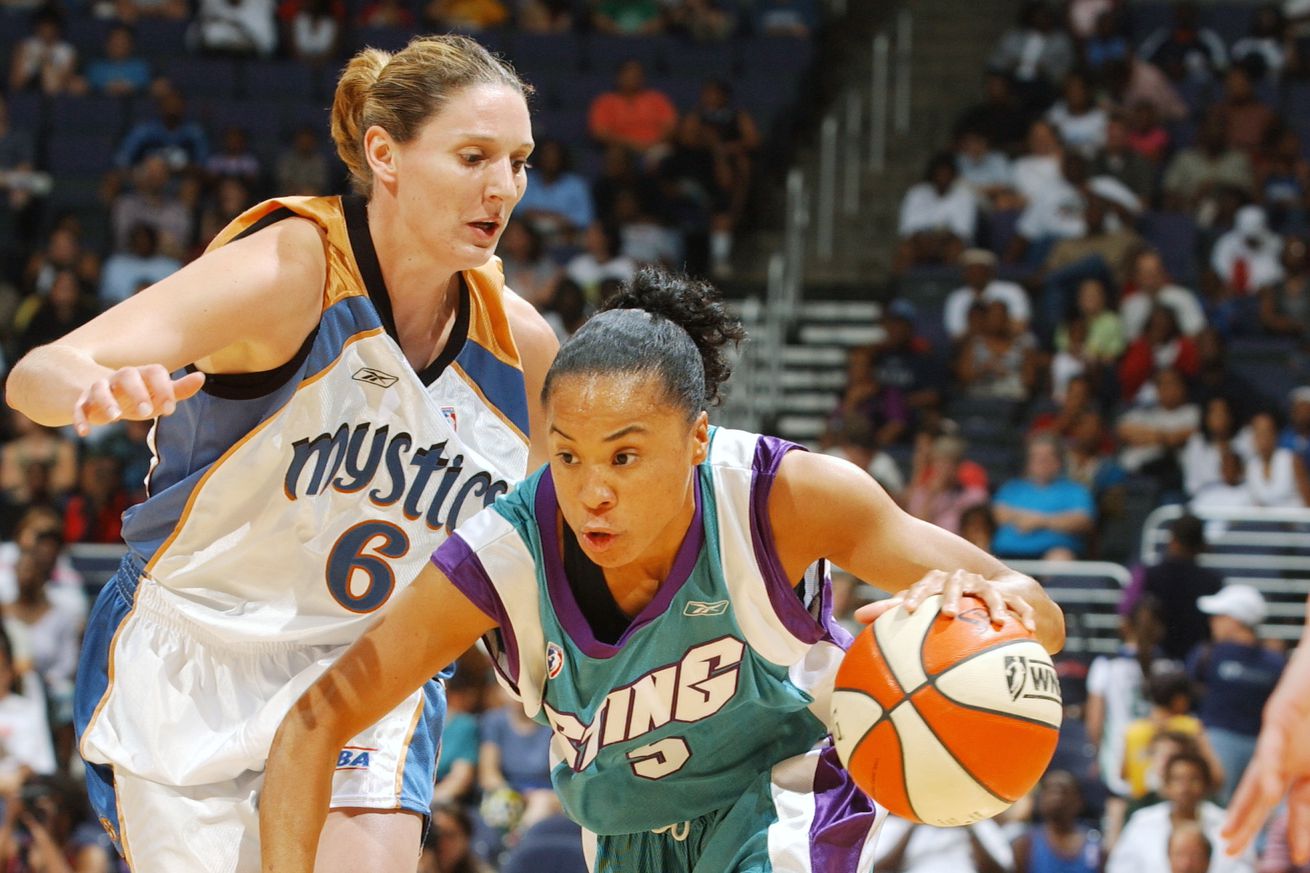 Dawn Staley is one of the best point guards in WNBA history.

Dawn Staley tops the list of best WNBA players ever to be picked ninth, despite some of her contemporaries having lengthier careers.

Dawn Staley, a point guard out of Virginia, came to the WNBA in 1999 after the American Basketball League folded in 1998. Staley was a two-winner of the Naismith College Player of the Year Award and had won Gold Medals in the Olympics in 1996 and the World Cup in 1998 for Team USA. Staley was drafted by the Charlotte Sting, essentially as an experienced veteran, where she spent the majority of her career prior to being traded to the Houston Comets, where she retired in 2006.

Staley was named to the WNBA All-Star team six times and averaged 8.5 points and 5.1 assists over her career. Staley’s 256 starts are the most of any player drafted ninth overall. Her impact now extends to the bench as arguably one of the best basketball coaches of all-time.

CoCo Miller was drafted by the Washington Mystics out of Georgia in 2001. Miller spent eight seasons with Mystics before going to the Atlanta Dream via free agency and spent her last year in the league with the Los Angeles Sparks in 2012.

Miller’s longevity in the league is due to her stability at the guard position, much more than any one stat could bear out. She averaged just 5.8 points over her career despite playing 15-20 minutes nearly every season. She was named the WNBA’s Most Improved Player in 2002, becoming a full-time starter in her second year after appearing in 20 games as a rookie. In 2010 and 2011, Miller was a part of the Atlanta Dream’s runs at a championship, but failed to win in either attempt. Her 352 career appearances are the most of any player drafted in ninth overall.

Ebony Hoffman was drafted in 2004 by the Indiana out of the University of Southern California. Hoffman spent seven of her 11 years in the WNBA with the Fever. Like Miller, Hoffman was never an All-Star, but did win the WNBA’s Most Improved Player Award in 2008 — her only double-digit scoring season (10.4 points and a career-best 7.8 rebounds per game). Hoffman’s prowess was not on the offensive end but on the defensive end, as she has the 23rd best defensive rating in WNBA history at 94.7.

Possible heirs to the throne

The best active player of those drafted ninth overall is the Fever’s Natalie Achonwa. Currently, Achonwa is a 53 percent shooter on two-point field goals, which is in the Top 20 in WNBA history. Her continued performance at that level will certainly give her a chance to be in the discussion of the greats in the history of the league, not just in her draft position.

Megan Walker of UConn comes to the league after a stellar junior season, averaging 19.7 points and 8.4 rebounds. Walker shot 47 percent from the floor and 45 percent from beyond the arc. If the New York Liberty’s first round pick of 2020 can elevate her game to the pros, there’s no telling what Walker will be able to accomplish.