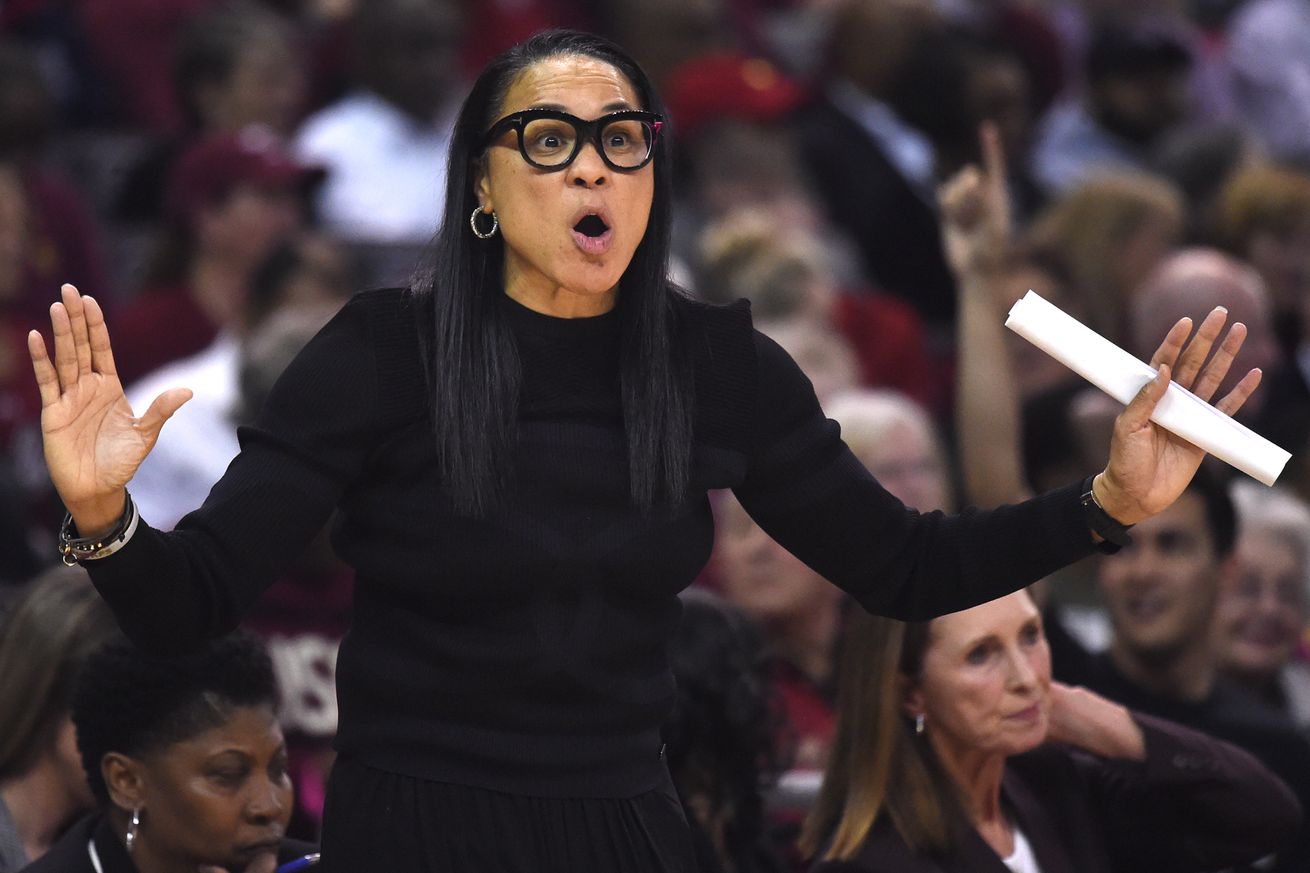 Dawn Staley never won a championship while wowing crowds for the Virginia Cavaliers in the early 1990s, or during her eight-year professional turn in the WNBA. Yet, by the time her South Carolina Gamecocks won the 2017 national title, she already was an icon.

When the smallest player on the floor is a freshman shooting 45.7 percent from the field and 35.5 percent from 3-point range for averaging 18.5 points per game, people take notice.

It was 1989 and the 5-foot-6, Philly-bred Dawn Staley burst onto the scene with a speedy brand of ball that dazzled fans, challenged opponents and elevated the Virginia Cavaliers to national prominence. With crafty ballhandling and impossible no-look passes, Staley showed herself to be an elite playmaker, even as a freshman; she averaged 4.7 assists per game in her first NCAA season.

Her per-game average of 5.1 rebounds and 3.3 steals exemplified her stellar swag, relentless will to win and general toughness.

The Cavaliers made it to the NCAA Tournament in each of Staley’s four years and competed in three Final Fours (1990, 1991, 1992). The Staley-era Cavaliers also won two ACC regular-season championships and three ACC Tournament titles. But the closest they would come to a national championship was the 1991 title game.

Facing the Pat Summitt-coached Tennessee Lady Volunteers as they battled for their third national title, Virginia entered the game knowing a win wouldn’t be easy. Yet, they never counted themselves out either, and Staley did her part with a 28-point outing that made her the first — and still the only — player from the losing team in NCAA Women’s Final Four history to win the Most Outstanding Player award. To be the best, you have to beat the best, and Staley beat out all the players on Summitt’s title-win squad for the award.

To boot, the Lady Vols did not clobber the Cavs. Virginia forced an overtime before falling 70-67 to Tennessee.

Former Virginia head coach Debbie Ryan remarked on Staley’s talent and inclinations for the game, her ability to know what’s going to happen before it happens, seeing two or three plays into the future.

Watch: ‘She knows how to manipulate the game’

A most painful Sting

What kind of team opens a season with a 1-10 record that includes seven consecutive losses and makes it to the WNBA Finals? A team where Dawn Staley is calling the shots. In this case, the 2001 Charlotte Sting.

Staley and the Sting did not have WNBA championship-winning experience, but the team had a solid relationship with Olympic gold medals. Entering the playoffs four games behind the top-ranked Cleveland Rockers in the East, the Sting were led by the late Anne Donovan, winner of Olympic gold medals as a player in 1984 and 1988. In time for the 2001 WNBA playoffs, Staley had won gold at the 1996 Atlanta Olympics the summer before the league’s inaugural season and at the 2000 Games in Sydney.

The Sting knocked off the 22-10 Rockers 2-1 in close contests in the Eastern Conference Semifinals. In the conference finals, they disposed of the New York Liberty in similar, tight-contest 2-1 fashion, showing the team’s grit and will to win. To make their come-from-behind 2001 season a success, however, Charlotte players needed to play the game of their lives against the 28-4 Los Angeles Sparks, who had swept the four-time champion Houston Comets in the Western Conference Semifinals and defeated the Sacramento Monarchs 2-1 in the conference finals.

The Sparks, led by Lisa Leslie, Tamecka Dixon and DeLisha Milton-Jones, handed the Sting a 75-66 home loss in Game 1 and completed the sweep with an 82-54 demolition in front of a championship-hungry L.A. crowd.

Leslie and other greats of the women’s game consider Staley to be one of the best they’ve ever played with or against.

At 50, Staley is a basketball icon, NCAA and WNBA trophies be damned. She reached such revered status because she stayed consistently excellent in subsequent endeavors. She won her third Olympic gold medal as a player in 2004, the year in which she was selected to carry the U.S. flag during the opening ceremony. From an assistant coaching position in 2008, she helped the national team to another gold at the Olympic Games in Beijing.

Earlier in 2008, Staley was named head coach at South Carolina.

She powered herself to these heights with a dogged work ethic and commitment to excellence. Nowhere does this show up more prominently in her resume than in the years in which she served as head coach of the Temple Owls while also playing in the WNBA. Staley’s WNBA career lasted from 1999 to 2006. She began coaching at Temple in 2000, winning the Atlantic 10 Coach of the Year award in 2004 and 2005.

Staley won her first international gold medal as head coach, in 2018 at the FIBA World Cup. She is tapped to lead the national team through 2020. With the Games postponed until 2021, she hopefully will still have a chance to claim another gold medal, this one as national team head coach.

In 2019-20, Staley’s new-look Gamecocks rose to an undisputed No. 1 national ranking after defeating 11 Top 25 teams and losing just one game all season. The Gamecocks were crowned SEC regular-season champions and SEC Tournament champions. Had the NCAA Tournament not been cancelled, there is little doubt South Carolina would have battled to the final game with a strong chance of winning it.

Even before her first NCAA championship as head coach at South Carolina, Staley was a Hall of Famer.

She was enshrined in the Naismith Memorial Basketball Hall of Fame in 2013.