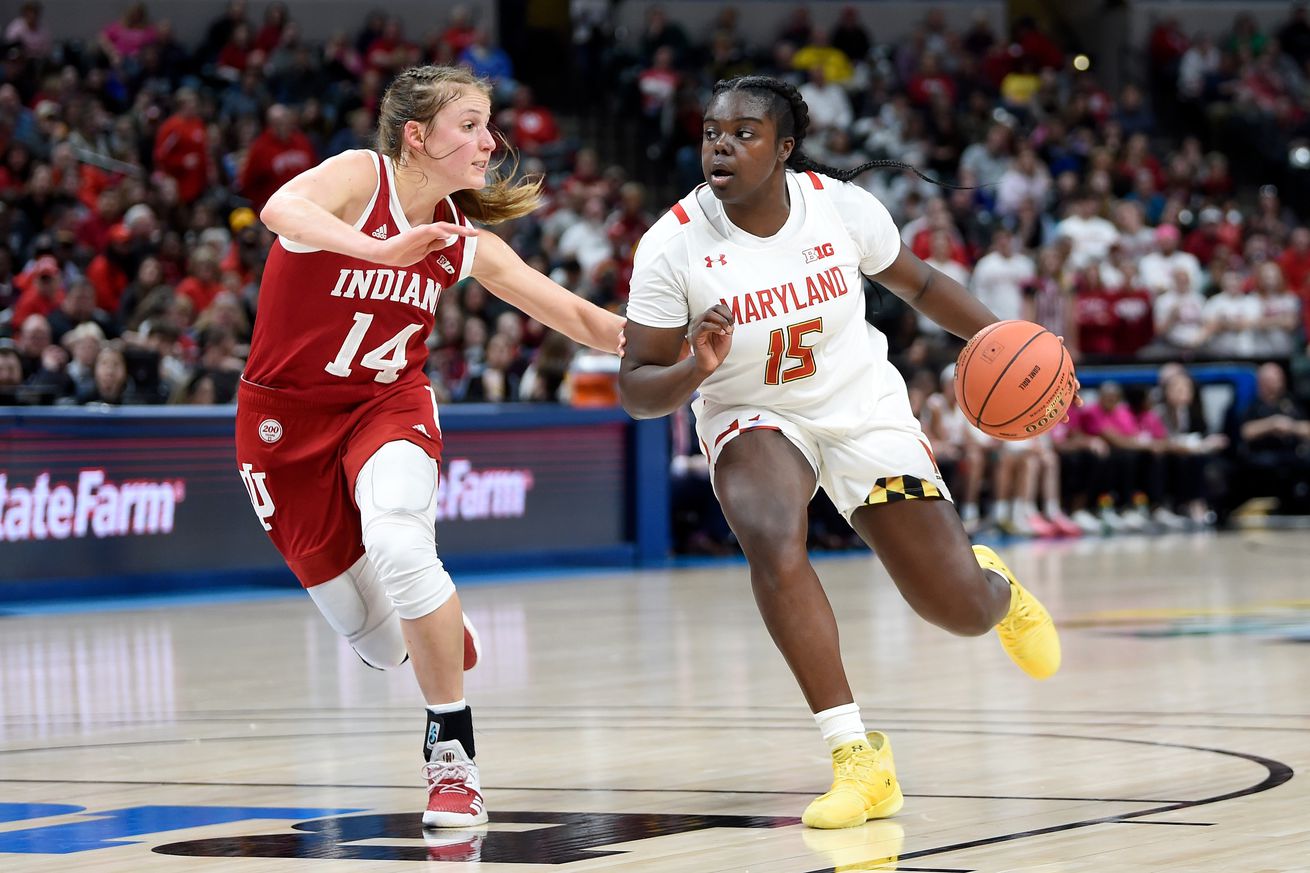 Ali Patberg of Indiana (left) and Ashley Owusu of Maryland are the floor generals for two of the top teams in the Big Ten. | Photo by G Fiume/Maryland Terrapins/Getty Images

Ali Patberg of the Indiana Hoosiers and Ashley Owusu of the Maryland Terrapins could be in for intense intra-conference battles, and the Michigan Wolverines, Rutgers Scarlet Knights, Northwestern Wildcats and Ohio State Buckeyes will make things even more interesting.

The Big Ten was a very exciting conference a season ago as it neared the competitiveness of the SEC and Pac-12. In 2020-21, however, the previously-dominant Maryland Terrapins — in their seventh season in the Big Ten — find themselves vulnerable. They lost their best player, Kaila Charles, to graduation and Taylor Mikesell and Shakira Austin to transfer. Can the Terrapins find a way to win the conference in spite of those losses? Or, will a new champion rise from a strong field of contenders?

Maryland may be able to deal with the losses because they bring in Angel Reese, the No. 2 prospect in the nation according to ESPN. If she can immediately form a star tandem alongside sophomore Ashley Owusu, Maryland will be in good shape. They also have head coach Brenda Frese at the helm and she has a proven track record of getting the best out of her teams — the Terappins improved over the course of the 2019-20 season and surprised a lot of people with their No. 4 finish in the AP Poll.

Even with Reese and Owusu, however, Maryland should expect challenges from the Indiana Hoosiers and Michigan Wolverines. The Hoosiers have a lot of good vibes surrounding them after an exciting 2019-20 season and Michigan is loaded with talent. Add in as a threat the Northwestern Wildcats, who currently are the second-highest-ranked Big Ten team after Maryland in ESPN’s “Way Too Early” rankings. And it would be a mistake to discount the Rutgers Scarlet Knights, who will be powered by arguably the best player in the conference in Arella Guirantes, or the Ohio State Buckeyes, who now have Dorka Juhasz as an upperclassman.

Rewind: A look at where the Big Ten left off

In 2019-20, Maryland shared the regular-season title with Northwestern and defeated Ohio State in the Big Ten Tournament championship game. Kathleen Doyle of the Iowa Hawkeyes was named Player of the Year before being drafted into the WNBA and Maryland’s Ashley Owusu was named Freshman of the Year. Northwestern’s Joe McKeown won Coach of the Year after leading the Wildcats to the best season in program history. And one of his players, Veronica Burton, won Defensive Player of the Year as a sophomore. Leigha Brown, a sophomore of the Nebraska Cornhuskers, was named Sixth Player of the Year. She has since transferred to Michigan and is eligible to play in the 2020-21 season.

Leigha Brown (@leigha32brown) has been granted immediate eligibility and will be on the court this season!

The Hoosiers are playing with house money now that “super senior” and WNBA prospect Ali Patberg has been granted a sixth year of eligibility and third with Indiana after transferring from the Notre Dame Fighting Irish. Patberg is the team’s point guard and emotional leader who averaged 15.6 points and 5.3 assists per game last season. She is joined by junior guard Grace Berger, who was on the rise in the 2019-20 season, and senior guard Jaelynn Penn, a solid 3-point shooter who is the most athletic of the trio. Mackenzie Holmes and Aleksa Gulbe are solid frontcourt players who round out the team. Brenna Wise, a solid contributor and leader, was lost to graduation.

Fifth in the nation in scoring margin last season, the Terrapins in 2020-21 will be without go-to scorer Kaila Charles (graduation/WNBA), elite 3-point shooter Taylor Mikesell (transfer) and dominant defender Shakira Austin (transfer). A lot of pressure will be on Owusu and Reese, but Harvard Crimson graduate transfer Katie Benzan and Mississippi State Bulldogs senior transfer Chloe Bibby will try to alleviate some of that with their leadership. If Diamond Miller, another highly-ranked recruit from Owusu’s class, improves into the star wing she is capable of becoming, Maryland may be able to win the conference.

The two big names on Michigan’s roster are juniors Naz Hillmon and Amy Dilk, whose chemistry really blossomed last season. Hillmon, a forward, could be in the running for Player of the Year if Dilk, a guard, keeps getting her the ball in the right spots. Meanwhile, the addition of Leigha Brown is huge. She made the strategic decision to come off the bench for Nebraska, so it will be interesting to see what kind of role she plays in Ann Arbor. Graduate guard Akienreh Johnson and senior forward Hailey Brown will also be in the mix for the Wolverines.

Senior guard Arella Guirantes is a gifted all-around scorer who led the conference with 20.6 points per game last season. She is projected to be a first-round pick in the 2021 WNBA Draft. But watch out for her sidekick, senior guard/forward Tekia Mack, who had a breakout junior season in 2019-20, and freshman point guard Diamond Johnson, the No. 6 recruit in this year’s class.

WNBA prospect Lindsey Pulliam is an exciting player to watch on offense and she will be in the running with Guirantes, Hillmon and Patberg for Player of the Year. Meanwhile, Veronica Burton averaged 3.3 steals per game last season and should perform as an apt co-star. Senior guard Jordan Hamilton and junior guard Sydney Wood also will be key as the Wildcats look to build upon their phenomenal 2019-20 campaign.

The Golden Gophers lost their best player, Destiny Pitts, midway through last season. Pitts entered the transfer portal after being suspended for what head coach Lindsay Whalen perceived to be bad body language and is now a member of the Texas A&M Aggies. Nevertheless, Minnesota’s core of Gadiva Hubbard, Jasmine Powell and Sara Scalia could help the Gophers finish ahead of an Iowa team that dominated in the Megan Gustafson era. The X factor for the Gophers will be how well Cornell graduate transfer Laura Bagwell-Katalinich adjusts to the Big Ten.

Junior center Monika Czinano needs to step up and become the best player on the Hawkeyes after spending a year backing up Gustafson and a year complementing Kathleen Doyle. Iowa lost a lot from beyond the arc with Doyle and Makenzie Meyer graduating, but added No. 4 national recruit Caitlin Clark, who could be the conference’s next great 3-point shooter. The Hawkeyes also return three of their top five scorers in Czinano, McKenna Warnock and Alexis Sevillian.

Purdue has sharpshooting guard Karissa McLaughlin returning for her senior season. She is joined by fellow upperclassmen senior guard/forward Tamara Farquhar and junior guard Kayana Traylor. While that core has a lot of experience and talent, the Boilermakers lost their first and third best scorers — Ae’rianna Harris and Dominique Oden, respectively — to graduation.

The Spartans lost Taryn McCutcheon and Shay Colley to graduation after going 16-14 a season ago. They will look to improve upon that record in 2020-21 with the star power of junior guard Nia Clouden, who made it to the All-Big Ten Second Team as a sophomore last season. To improve Clouden’s supporting cast, the Spartans are hoping Buckeyes transfer Janai Crooms is granted immediate eligibility.

Kate Cain, a 6-foot-5 center with WNBA potential, returns to the Cornhuskers for her senior year. Nebraska also returns its second-leading scorer in Sam Haiby. But with its top scorer, Leigha Brown, transferring to Michigan, Nebraska has a lot of work to do to remain relevant in the conference.

The Lady Lions lost Kamaria McDaniel, the second-best scorer in the conference, via transfer to the Baylor Lady Bears. And McDaniel was the lone bright spot for a team that went 1-17 in conference play last season. But Villanova Wildcats transfer Kelly Jekot and Southern Methodist Mustangs transfer Johnasia Cash could provide a spark and help out sophomore guard Makenna Marisa.

Imani Lewis, who averaged 14.5 points and 8.6 rebounds last season, is a great individual star for the Badgers. She may not have the supporting cast necessary to go far, but the team does have Sydney Hilliard, the Badgers’ third-leading scorer, returning after averaging 9.2 points per game in 2019-20.

Illinois lost its top scorer, Petra Holesinska, who is now a graduate student playing for the North Carolina Tar Heels. The Fighting Illini, therefore, will be searching for impact players to step up behind sophomore forward Kennedi Myles, who averaged 8.9 points and 8.7 rebounds in the 2019-20 season.