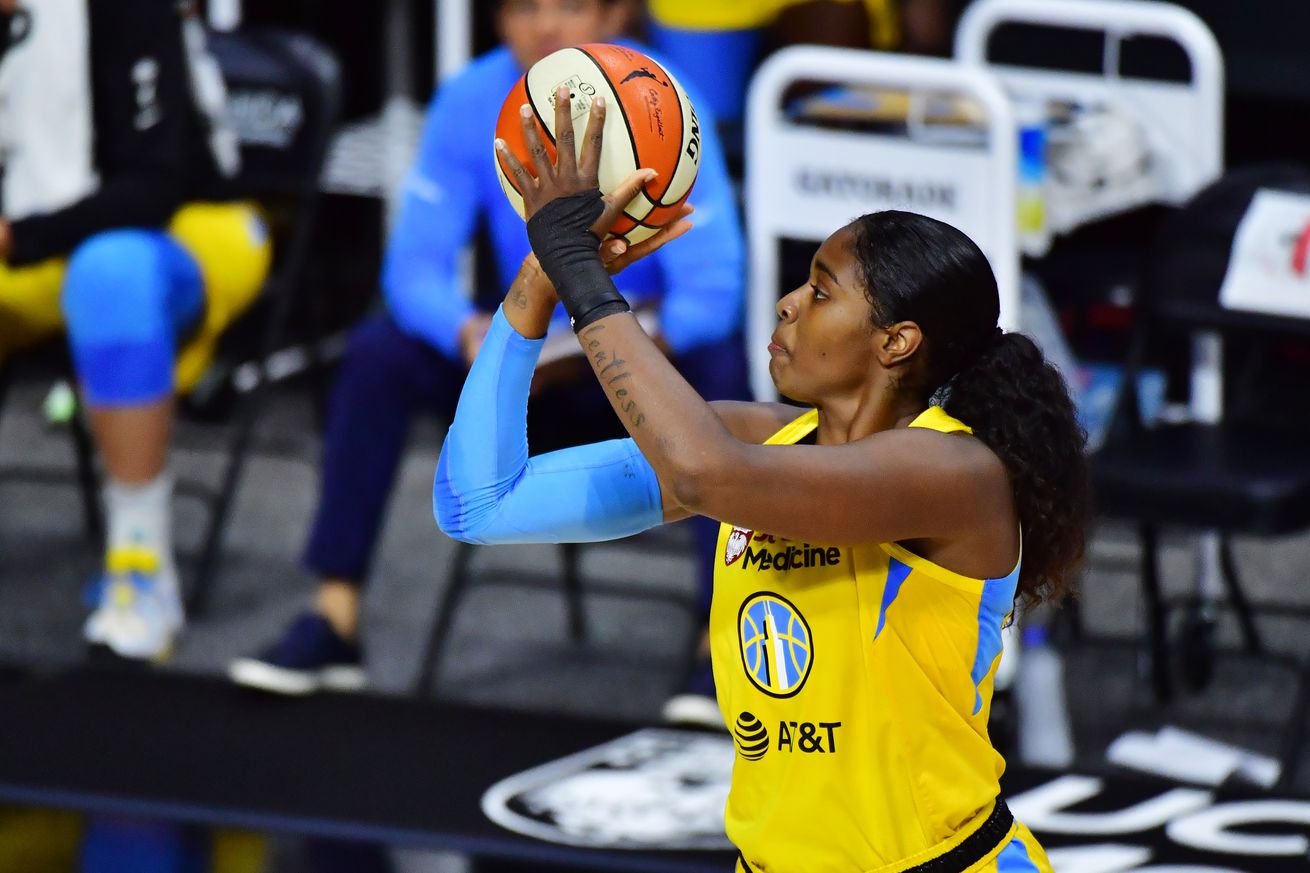 Cheyenne Parker had her best season yet for the Sky, but the team’s other frontcourt players struggled with health and consistency. | Photo by Julio Aguilar/Getty Images

Though the Chicago Sky continue to get world-class play from their starting guards and can push the envelope with their perimeter players, the team’s frontcourt must have a stronger presence in 2021 if Chicago is to reach its ceiling.

After a thrilling and unprecedented bubble season in 2020, Swish Appeal has decided to examine what each WNBA team needs the most heading into what will hopefully be a more normal 2021 WNBA season. Here’s a look at what the Chicago Sky need to do this offseason:

The Sky were a trendy pick to contend for a championship during the 2020 WNBA season in the bubble, with most anticipating a third-year leap from athletic wing Diamond DeShields and the length of newly-acquired forward Azurá Stevens to bolster the team’s already-excellent backcourt play.

For the first leg of the season, the Sky looked to be a team that would fulfill its potential. An injury to DeShields hampered her production, but guard tandem Courtney Vandersloot and Allie Quigley remained as solid as ever and breakout performances from Stevens, Kahleah Copper and Cheyenne Parker gave the team several added dimensions.

Chicago, however, lost six of its eight final regular-season games and fell from a first-round playoff bye candidate to a team that limped into the postseason. The Sky were quickly dispatched by the Connecticut Sun, who widely exposed a weakness Chicago had been trying to mask for the entire season: frontcourt depth.

To be fair, the Sky roster was, at that point, barely reminiscent of the one that initially departed for the Bradenton, Florida, bubble. Both Stevens (knee) and DeShields (personal reasons) had left the team. Head coach and general manager James Wade, who was all but forced to make a trade to acquire another healthy body, took Stephanie Mavunga off the Indiana Fever’s hands but the third-year big never truly established herself in Wade’s rotation.

Under normal WNBA circumstances, the Sky’s fortunes might have been different — depth was a luxury afforded to few teams in 2020 and Chicago was not one of the lucky ones. Without Stevens and DeShields making plays on the defensive end, the remainder of the Sky’s frontcourt was continuously pounded by bigger and/or quicker opponents. Chicago finished the season in the middle of the pack in offensive (28.0 percent) and defensive (70.4 percent) rebounding percentage and allowed the third-most (36.6) points in the paint per game.

Most concerning, though, was the 108.5 points allowed per 100 possessions during the Sky’s 2-6 losing skid — a figure that had ballooned from the 99.4 defensive rating the team boasted when it started the season 10-4.

Is an overhaul necessary?

It’s true that one can’t pin a team’s defensive shortcomings solely on its frontcourt but Chicago just didn’t match up well enough in that area with other contending teams. Post play hasn’t been a strength of the Sky’s since the end of the Sylvia Fowles era in Chicago. So, while 2020 started promisingly, its end was all too familiar for Wade and his squad.

That’s not to say things are hopeless. Parker was one of the Sky’s brightest spots the entire season, posting career-bests in scoring (13.4 points) and scoring efficiency (65.3 percent true shooting), often as the sole frontcourt player Wade could rely upon consistently. Meanwhile, rookie Ruthy Hebard was as advertised: an efficient scoring forward who played well with Vandersloot and finished nearly everything the veteran guard tossed up at the rim.

Elsewhere in the frontcourt, things are considerably muddier. Center Stefanie Dolson struggled to stay on the floor, whether because of nagging injuries or foul trouble, and she did not provide the rebounding (10.1 percent total rebounding percentage) needed from the position. Mavunga theoretically could be that rebounding force but other parts of her game remain a wild card. Stevens, meanwhile, will be recovering from a knee procedure.

Heading into the offseason, Parker’s status will be of utmost importance. Wade told the Chicago Sun-Times that he envisions her as the team’s starting center moving forward and Parker has expressed her love for the Sky organization. Now an unrestricted free agent, Parker’s career year could command a nice chunk of change.

Wade could try to move Dolson and her salary of $175,000 (per Her Hoop Stats). But even if he’s able to re-sign Parker, the team’s depth will still be a concern. Barring a major shakeup in Chicago, the Sky may just have to rely on the health of Stevens, positive regression from Dolson and significant defensive improvement from Hebard if they’re going to make a serious run at the 2021 title.