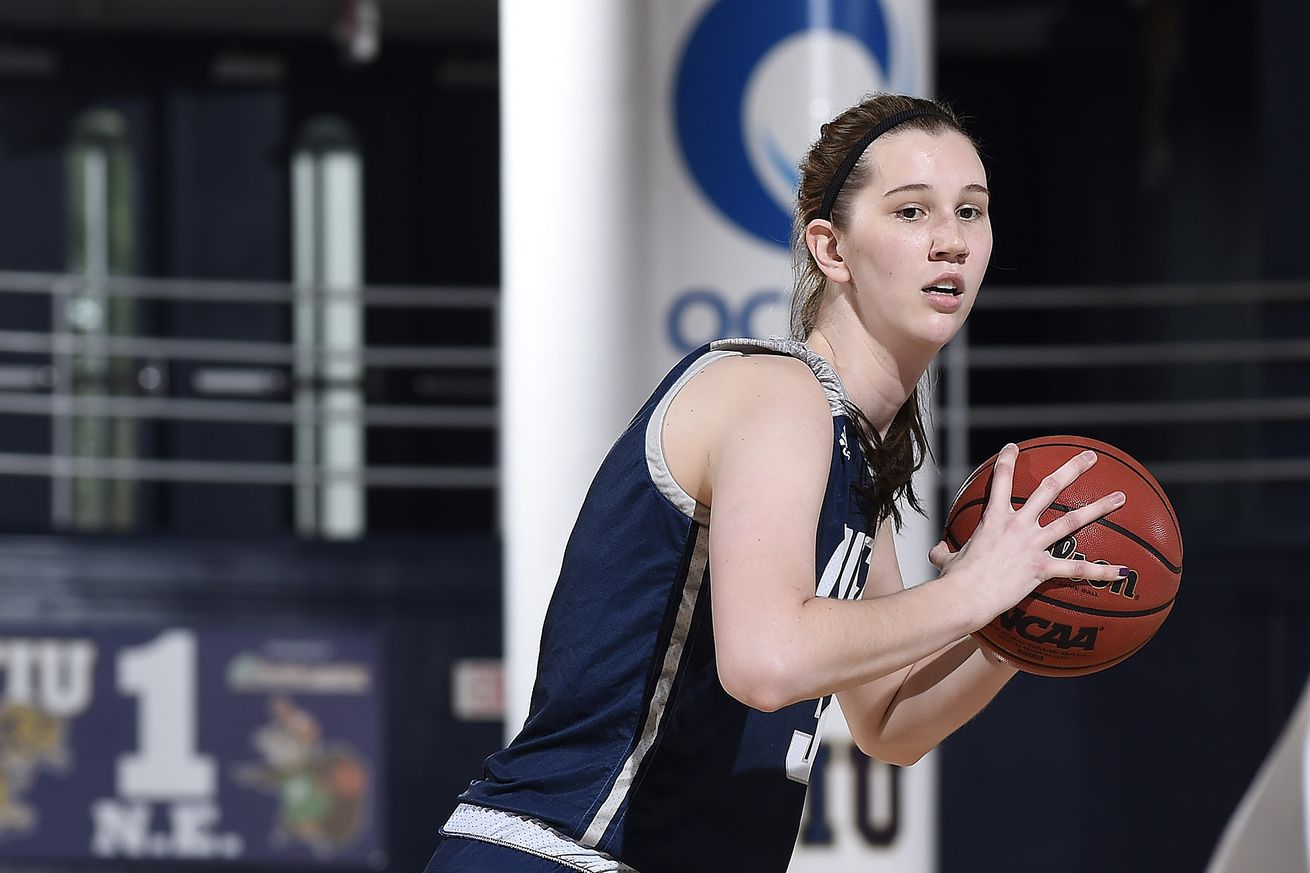 Can Nancy Mulkey, named co-Preseason Player of the Year, help keep the Rice Owls at the top of Conference USA? | Photo by Samuel Lewis/Icon Sportswire via Getty Images

Led by sisters Anastasia and Aislynn Hayes, Middle Tennessee will aim to end Rice’s two-year reign at the top of Conference USA. However, Co-Preseason Player of the Year Nancy Mulkey intends to extend the Owls’ run, while Old Dominion, under new head coach Delisha Milton-Jones, also strives to contend for the regular season and tournament championships.

In the face of the health and safety concerns and challenges caused by the continuing COVID-19 crisis, Conference USA (C-USA) has modified its schedule format for the 2020-21 season.

All teams are slated to play an 18-game regular season conference schedule. To reduce travel, teams will play back-to-back games on Fridays and Saturdays at a single site. In a recent announcement, C-USA further clarified:

Schools will play two games per visit at four select C-USA campuses, and will host four teams for a two-game series. Teams will also have a home-and-home opportunity with a designated rival opponent.

While the format may be different, the competition should not be diminished.

Rewind: A look at where the Conference USA left off

She's done it again! @Ogwumi13 is the @ConferenceUSA Player of the Year!

However, Ogwumike and the Owls did not get the opportunity to win a second consecutive tournament title, as the 2020 C-USA tournament was cancelled after the first round due to the COVID-19 pandemic.

But they did earn a berth in Swish Appeal’s hypothetical bracket, where the Owls were a No. 13-seed and No. 49 overall. Old Dominion, which finished second in the conference standings, received a No. 11-seed, and No. 44 overall, in Swish Appeal’s bracket. The Lady Monarchs were led by Coach of the Year Nikki McCray, who has since moved to Mississippi State and the SEC.

Here’s where each team stands entering the 2020-21 season, in order of the ranking determined by conference coaches:

On the season’s opening date, Middle Tennessee, which received eight first-place votes in the preseason conference coaches poll after finishing 13-5 in conference action last season, can unquestionably show that they are the class of C-USA.

The Lady Raiders welcome the Louisville Cardinals to Murfreesboro on Nov. 25. A close contest, or even a victory, against a team with national title prospects would give MTSU a boost of well-earned confidence.

Regardless, the Lady Raiders seem well suited to contend for both the regular season and tournament championships due to the Hayes sisters. Junior guard Anastasia Hayes, who debuted for MTSU last season after beginning her collegiate career at Tennessee, was named Co-Preseason Player of the Year. Last season, she earned the C-USA Newcomer of the Year award by averaging 18.7 points, six rebounds and 4.4 assists per game. She also was an All-C-USA First Team honoree.

“We’re looking better and better everyday and I like the chemistry we got.” - @CoachInsell #Blueraiders | #MT pic.twitter.com/wW72SljsVs

Matching last season’s 16-2 mark in conference play will be a tough task for the Owls.

To meet this expectation and extend Rice’s run of C-USA triumphs through a third-straight season, head coach Tina Langley will be turning to senior center Nancy Mulkey.

Conference coaches tapped Mulkey as Co-Preseason Player of the Year based on her all-round excellent junior season. The 2020 C-USA Defensive Player of the Year, Mulkey anchored the Rice defense by swatting away opponents’ shots at an elite rate. Her 3.21 blocks per game was tops in C-USA and fifth nationally. Her 77 total blocks were best in C-USA and the 19th nationally. Also an All-Conference First Team member, Mulkey was efficient on the offensive end last season. She scored 12.9 points per game on a field goal percentage of 52.4 percent. She also lead the conference in free-throw percentage at 84.4 percent.

Langley also will be looking to sophomore guard Lauren Schwartz and senior guard Sydne Wiggins to keep the Owls at the top of the conference. Both are proven sharpshooters. Schwartz, a C-USA All-Freshman Team member, shot 36.7 percent from deep last season, which was good for fourth-best in the conference. Wiggins was the fifth-best 3-point shooter in C-USA last season, converting 35.8 percent of her shots from behind the arc.

And she arrives with expectations. The Lady Monarchs received three first-place votes in the preseason conference coaches poll.

Last season, Nikki McCray, in only her third season as head coach at ODU, led the Lady Monarchs to an overall record of 24-6 and a 14-4 conference record, which likely would have been good enough for a berth in the NCAA Tournament. A stingy defense, in particular, pushed ODU to this success, as they allowed opponents to score only 58.2 points per game — the best mark in C-USA.

Milton-Jones will aim to re-activate that defensive intensity in order to not only continue ODU’s upward trajectory but also put the Lady Monarchs in contention for the conference championships.

Luckily for Milton-Jones, ODU claims two of the conference’s best players in junior forward Amari Young and junior guard Ajah Wayne. Both were named to the Preseason All-Conference Team. As a sophomore, Young averaged 10.7 points, 8.2 rebounds and 2.1 steals per game, earning spots on the All-C-USA Second Team and All-Defensive Team. Wayne joined Young on the All-C-USA Second Team after posting 10.7 points, 6.9 rebounds, 1.2 assists and 1.1 steals per game.

First practice back in Chartway Arena

Head coach Cara Consuegra should enter her 10th season at Charlotte with optimism.

The 49ers return three seniors and two juniors with significant experience, led by senior guard Mariah Linney. After leading Charlotte as a high-minute, high-volume 3-point shooter during her junior season, Linney was named to the 2020-21 Preseason All-Conference Team. The 49ers also will expect a lot of junior point guard Jada McMillan, who averaged nearly four assists per game as a sophomore, which was her first at the helm of the Charlotte offense.

McMillan’s high school teammate — Tamia Davis — should further strengthen the 49ers’ backcourt rotation. Having begun her career at Kansas, the sophomore guard was a top-45 recruit in the class of 2019.

“Living out my dreams, my life is different” ‼️ pic.twitter.com/7PbUHuCd7l

With one of the youngest teams in C-USA, Western Kentucky will have a hard time matching last season’s 14-4 conference record, which resulted in a third place finish in the conference standings.

Nevertheless, head coach Greg Collins has confidence about his Lady Toppers due to returning contributors in senior forward Fatou Pouye, junior guard Meral Abdelgawad and redshirt sophomore guard Myriah Haywood. While Pouye will be expected to anchor WKU’s defense, Abdelgawad and Haywood should provide energy on both ends of the floor.

Yet, in order to threaten the conference’s predicted powers, Collins will need some of his seven freshman to step up. In particular, guards Hope Sivori and Jordan Smith, both of whom were McDonald’s All-American nominees, and forward Tori Hunter, a three-star recruit, have to potential to provide instant impact.

In 2019-20, UTEP used an uptempo offense to improve their overall record by seven wins, as well as secure an 8-10 record in conference play.

Much credit for the Miners’ success was due to sophomore point guard Katia Gallegos, who turned in one of the best debut seasons in UTEP history. Gallegos set freshman assist records with 5.1 per game and 154 for the season. She also led the Miners wit 1.7 steals per game and 52 total steals. A 2020 C-USA All-Freshman Team honoree, Gallegos was named to the 2020-21 Preseason All-Conference Team.

The Dragons also lost all players with significant starting experience to graduation.

This roster turnover explains why UAB, which finished in 5th place with a 12-6 conference record last season, is expected to drop off in 2020-21. Among returnees, junior guard Margaret Whitley appears most prepared to emerge as an impact player.

Head coach Jalie Mitchell’s Mean Green will look to use an ambitious, early season non-conference schedule to prepare for the C-USA grind.

Notable games include a Nov. 29 matchup against Texas in Austin. Last season, North Texas dropped a hard-fought contest against Texas. The season prior, the Mean Green nearly upset the then-ranked Longhorns. On Dec. 22, North Texas will face the Oklahoma State in Denton, hoping to defeat the Cowgirls for only the second time in 14 meetings. North Texas also will participate in the South Padre Island Classic at UT Rio Grande Valley, where they will meet Weber State and Prairie View A&M.

Head coach Brooke Stoehr enters her fifth season at the helm of her alma mater, seeking to restore the Lady Techsters to their former glory. Last season, Louisiana Tech finished 11th in the conference standings with a 6-12 record.

Leading this effort for Stoehr and Tech will be senior guard Amber Dixon, who was named to the Preseason All-Conference Team. Last season, Dixon did it all for the Lady Techsters. She averaged 12.1 points, 3.6 rebounds and three assists per game. She also led the team with 89 assists, 46 steals and 11 blocks.

Stoehr also will call on Dixon’s fellow senior guard Raizel Guinto, the 2020 C-USA Co-Sixth Player of the Year, to captain the Lady Techsters through the uncertain 2020-21 season. Last season, Guinto was the Lady Techsters’ best, and C-USA’s fourth-best, 3-point shooter, converting 35.7 percent of her shots from deep.

We are taking what we have in the present and giving everything the best that we can! #GiveyOURbest pic.twitter.com/57J8bkqCzG

In addition to relying on returnees Lotta Vehka-Aho, a sophomore guard, Juliette Gauthier, a junior wing, and Astou Gaye, a senior forward, head coach Jim Jabir will be looking to four newcomers to better the Owls’ 7-11 conference record from last season.

Head coach Joye Lee-McNelis welcomes one of the most impressive signing classes in Southern Miss history to Hattiesburg.

These six will be expected to provide the production lost due to the graduation of Respect Leaphart, who was named to the All-Conference Second Team after averaging 15.3 points and seven rebounds for the 7-11 Golden Eagles in conference play last season.

Her freshman season, Wheeler effectively drove the ball to the hoop, drew fouls and drained free throws. She was the only freshman to finish in the top 40 in free throws made (130) and free-throw percentage (83.9 percent). She also led the Herd in steals (41) and assists (83). Her all-round relentlessness earned her C-USA All-Freshman Team honors last season, as well a spot on the 2020-21 Preseason All-Conference Team.

"Where do they be at when they say they doing all this and all that?"

We in the trenches. RELAX. #together pic.twitter.com/PTzxTklYNu

After a rough 2019-20 season, where the Road Runners finished 2-16 and in 14th place, things can only improve for UTSA. Head coach Kristen Holt will again rely on a pair of sophomores to spur the Roadrunners — guard Mikayla Woods and forward Adryana Quezada. Woods, who led UTSA in scoring last season with 15 points per game, earned a spot on the C-USA All-Freshman Team. Quezada finished her freshman season averaging 13.4 points and 6.1 rebounds per game.

✅ New faces in the Convo
✅ New gear
✅ Ready for the 2020-21 season#BirdsUp pic.twitter.com/QgXYQWRhfj

According to prognostications, it will be difficult for FIU to match the 13th-place finish and 3-15 conference record that they achieved last season. However, that means new head coach Jesyka Burks-Wiley, who previously served as an assistant coach at South Florida, has the opportunity to exceed expectations in her first season with the Panthers. To help her squad climb up the conference table, Burks-Wiley will be counting on a collection of potentially promising transfers — forward Alma Danielsson (Palm Beach State), guard Kyla Nelson (Pitt), guard Raquel Ferrer-Bernad (Casper College) and forward Liz Satter (Penn).

Jan. 15 & 16: Rice at Old Dominion. Last season, the Owls and Monarchs split two tough contests, with the home team prevailing each time. This season, the Owls will have to meet the Monarchs twice on their turf in a potentially intense mid-January back-to-back battle.

Feb. 26 & 27: Old Dominion at Middle Tennessee. In the final weekend of regular-season action, the Monarchs will play the Lady Raiders back-to-back in Murfreesboro. The pair of games could determine the regular season conference championship.