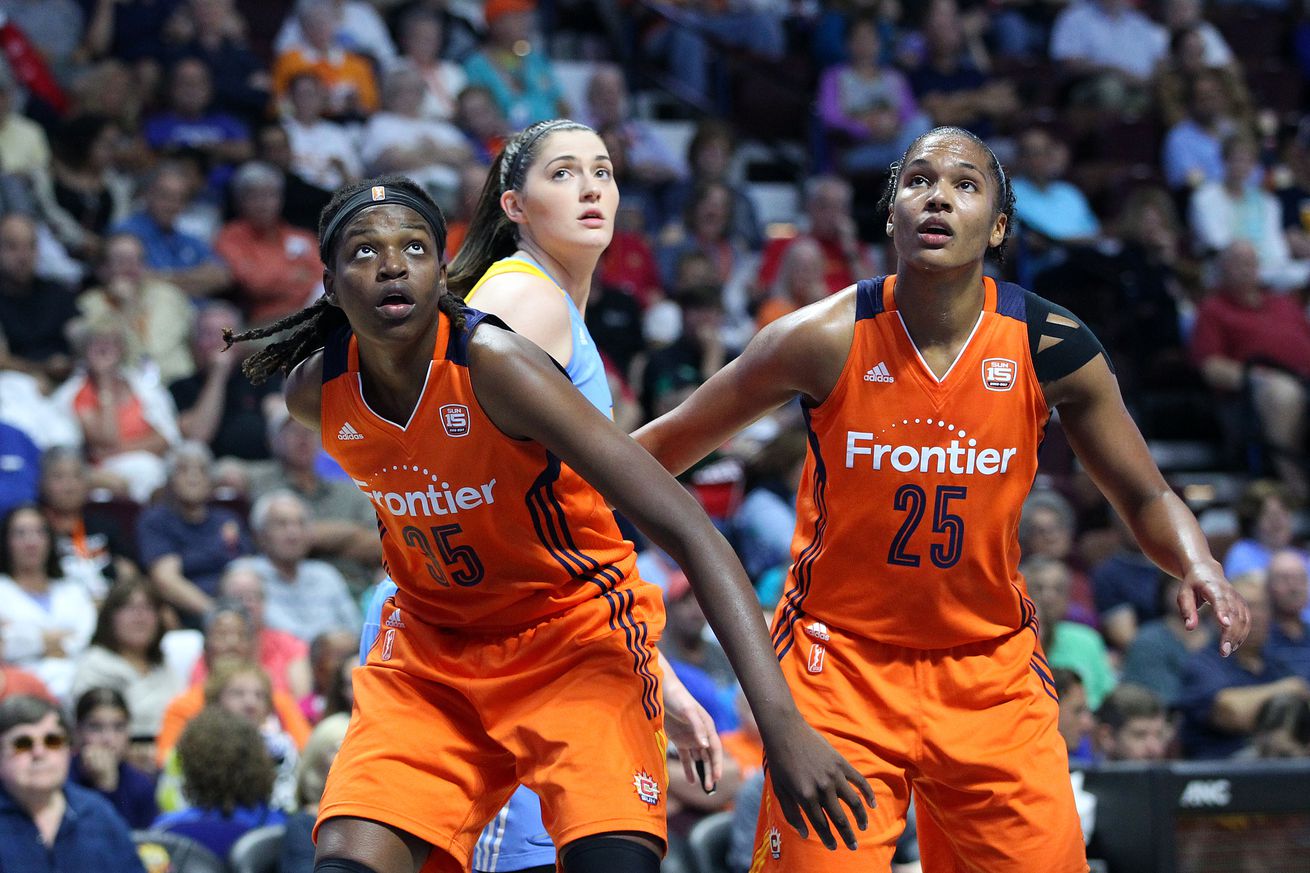 You can bet that Jonquel Jones (left) and Alyssa Thomas will have each other’s backs if they reunite in 2021. | Photo by M. Anthony Nesmith/Icon Sportswire via Getty Images

Jonquel Jones, DeWanna Bonner and Alyssa Thomas of the Connecticut Sun could form one of the best star trios in the WNBA in 2021 if Thomas re-signs. Can they find a way to complement each other and elevate Connecticut’s offense?

After a thrilling and unprecedented bubble season in 2020, Swish Appeal has decided to examine what each WNBA team needs the most heading into what will hopefully a more normal 2021 WNBA season. Here’s a look at what the Connecticut Sun need to do this offseason:

The Sun aren’t the only team that is going to get better when the players who opted out of the 2020 WNBA season return, but getting Jonquel Jones back will make them a contender. Connecticut was one game away from the WNBA Finals without Jones, and she is an MVP-caliber player.

The Sun have to be mindful of how it runs its offense, though. Jones and the team’s 2020 MVP, DeWanna Bonner, have similar styles of play, and the third member of what could become a dangerous “Big Three” — unrestricted free agent Alyssa Thomas — has a developed a unique approach on offense because of torn labra in her shoulders.

Sun head coach Curt Miller got it right in 2019 with just Jones and Thomas. The team was fourth in the league in scoring and just one game away from a WNBA championship. The Sun made it to the semifinals in 2020, but on the strength of their defense. To contend in 2021, they need to clean up their concerning offensive statistics from this past season:

Also, the Sun cannot continue to rely on monster games from Thomas in the playoffs. Not every playoff game can be like Game 3 of the 2020 semifinals series between the Sun and Las Vegas Aces where Thomas scored 23 points to lead her team to victory in spite of a relatively quiet 12 points from Bonner and just 77 points for the team. The Sun need to have three stars if they want to go far against a competitive 2021 field. This means the Sun must re-sign Thomas.

It also means Jones and Bonner will need to learn to complement each other’s talents and find the right floor spacing to accommodate Thomas’ injury.

The Sun have already found success with Thomas in the middle of the half-court set, comfortably far from any defenders because she can no longer shoot midrange shots. It’s great that Thomas (6’2”) is able to get assists in that type of set, and sometimes back down like a post player and score. At other times, however, the team resorts to her attempting a floater from near the free-throw line and that’s not ideal.

Expect Connecticut to fight to keep the star who has been one of the best WNBA playoff performers over the past two seasons and who arguably is the best defender in the league. But the Sun have to use Thomas the right way — by adjusting to keep her, Jones and Bonner all on the floor.

Highlights: Jonquel Jones was a huge piece missing from the 2020 Sun