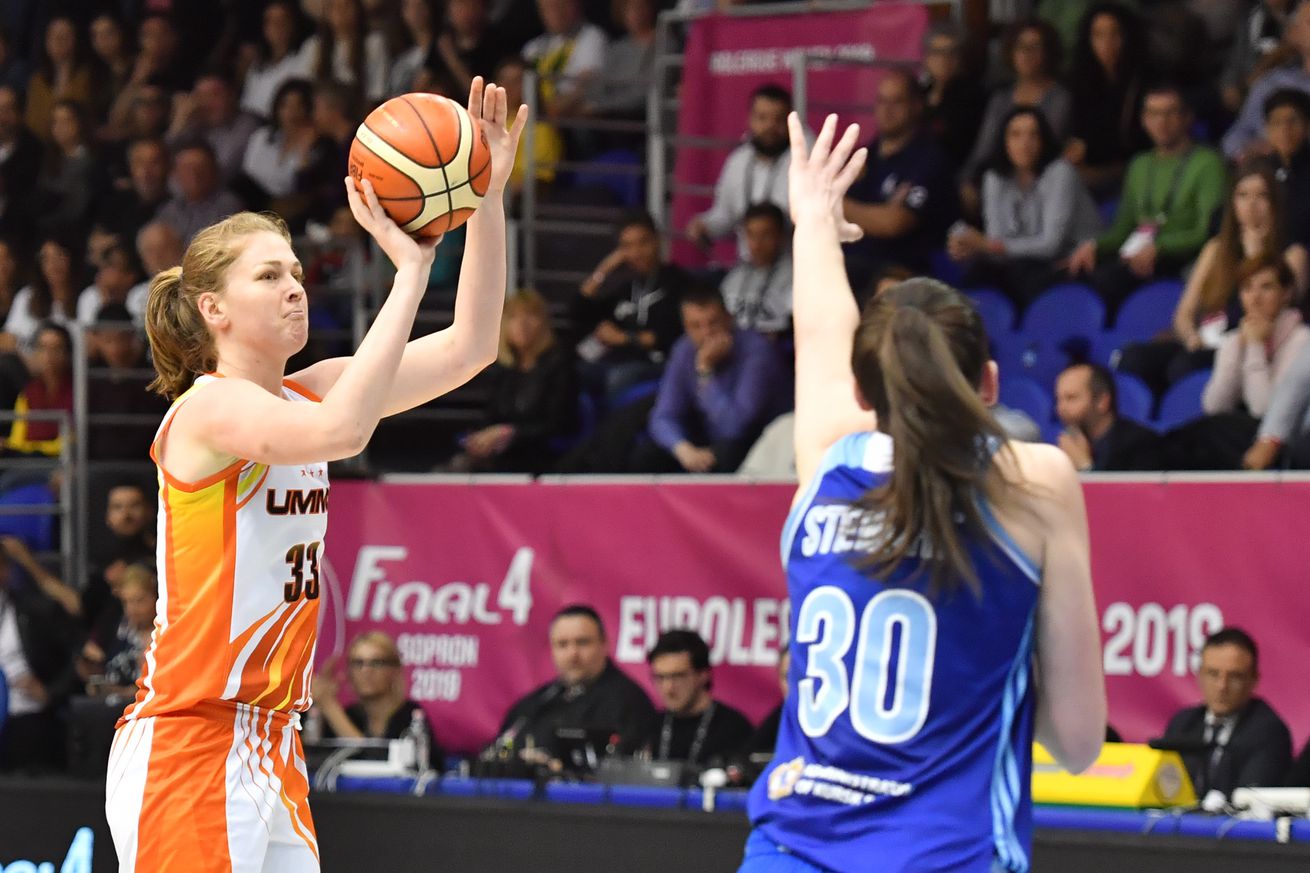 Russian super team UMMC Ekaterinburg became even scarier by signing former WNBA MVP Breanna Stewart to its already-loaded roster. This will be Stewart’s first action in EuroLeague Women since she ruptured her Achilles in the 2019 championship game against Ekaterinburg.

After a multi-week hiatus during which qualifying tournaments for the 2020 Tokyo Olympics were played, EuroLeague Women is back, and with another star player: Breanna Stewart. She’ll be playing for — surprise! — Russian super team UMMC Ekaterinburg, which needed an American replacement for Jamierra Faulkner after the point guard suffered a knee injury.

It’s a strange twist of fate for Stewart, who ruptured her Achilles last spring while playing for Dynamo Kursk in the EuroLeague Women championship game. Her opponent in that title match? UMMC Ekaterinburg.

That’s a lot of parts to fit together — especially in the frontcourt — but the depth of talent on Ekaterinburg is undeniable. If the team wasn’t the clear favorite to win the EuroLeague Women championship before, it certainly is now.

The league’s Twitter account now raises the question we’re all wondering: How is anyone going to stop Ekaterinburg?

Matchup details: Not much to see here. Çukurova has been a mess all season. Though the club has featured WNBA talent including Nia Coffey, Morgan Tuck and Alex Bentley, its 2-10 record speaks for itself. Meanwhile, Braine hasn’t been much better, having lost six straight games. If there’s one reason to watch, it’s for the revenge factor: Braine beat Çukurova 90-59 back in December.

Matchup details: Fenerbahçe has been cruising atop Group B, winning its last six games. It also made a pretty big signing over the break by bringing in Chelsea Gray. BLMA was victorious in the last meeting between these two games, but with Gray now in Fenerbahce and Stephanie Mavunga still out for BLMA (plantar fascia), it will be an uphill battle for the French club.

Matchup details: Believe it or not, Riga is in position to swipe a playoff spot after a horrendous start to EuroLeague Women season. Of course, that spot will be in EuroCup, not EuroLeague, but it’s still something. Nadezhda, on the other hand, has already qualified for the EuroLeague playoffs but will need to remain sharp after the league’s extended time off.

Matchup details: Most Valuable Player candidate Alyssa Thomas and Praha continue cruising through Group A, and it seems like a foregone conclusion that they’ll finish No. 2 in the group behind Ekaterinburg. Venezia, on the other hand, is playing for an appearance in the EuroCup playoffs. Jolene Anderson continues her steady play for Venezia with per-game averages of 10.6 points, 6.8 rebounds and 3.8 assists.

Matchup details: Although Bourges has been hot and currently sit in third place in Group A, the team faces the Ekaterinburg buzz saw, among the most talented EuroLeague Women ever assembled. Natalie Achonwa will have her hands full with Ekaterinburg’s stacked frontcourt.

Matchup details: The Féminin of Lyon are clinging to their playoff hopes by a thread, currently sitting in fifth place in Group B with two regular-season games to go. They will have a good chance to lock up another win against Gdynia, however — the Polish club hasn’t won since mid-December, the last meeting between these two teams. Look for Alysha Clark and Lyon to be the favorites here.

Matchup details: It’s now or never for Kursk, which has been a disappointment all season and now is in danger of missing out on the EuroLeague Women playoffs. Sopron was in a similar situation a few weeks ago but seems to have gotten it together with three straight victories. The team records in this matchup may not impress but there’s a lot at stake in this matchup. Plus, there’s plenty of WNBA talent on both sides: Angel McCoughtry, DeWanna Bonner, Jessica Breland and Glory Johnson play for Kursk, and Briann January and Candice Dupree suit up for Sopron.

Matchup details: Famila Schio seemed like a contender for the Group B crown a month or so ago but the Italian club has fallen off a bit and is now tied with BLMA for second place. Girona, meanwhile, has been one of the least impressive teams in the group all season and will likely be gunning for the EuroCup Women playoffs if it can extend its season.