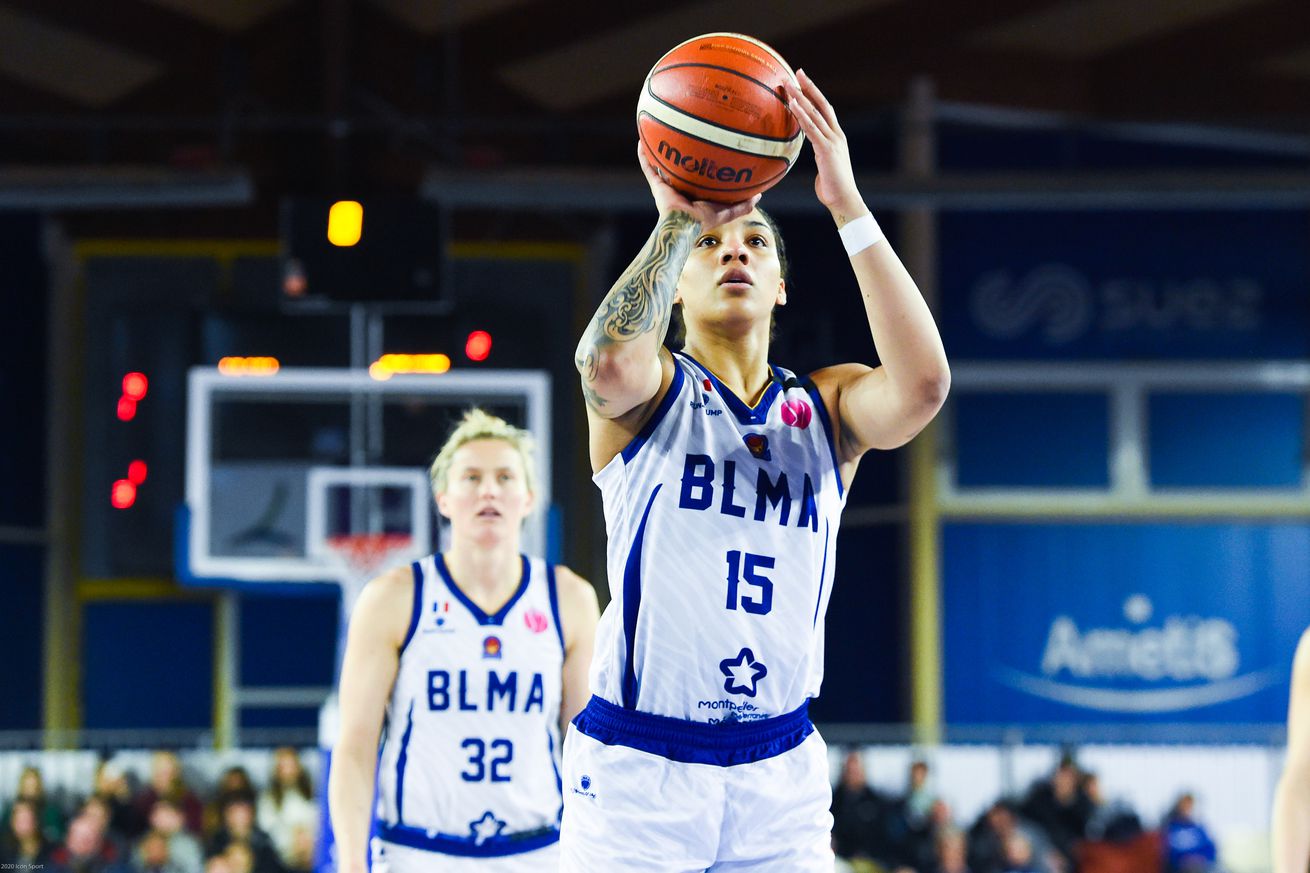 Gabby Williams and BLMA did not travel to Russia for their first quarterfinal game against UMMC Ekaterinburg. | Photo by Alexandre Dimou/Icon Sport via Getty Images

The EuroLeague Women quarterfinals are underway, but health concerns related to the COVID-19 virus have taken top priority. FIBA has canceled the first game between UMMC Ekaterinburg and BLMA, while other games will have attendance limitations.

EuroLeague Women’s quarterfinal action begins today — for the most part.

Due to ongoing concerns related to the COVID-19 virus in Europe, FIBA announced on March 10 that competitions this week — including EuroLeague Women — will restrict game attendance or, in some cases, have particular games canceled entirely.

Among the canceled games is the first in the best-of-three series between UMMC Ekaterinburg and BLMA. BLMA did not travel to Russia due to COVID-19-related concerns.

The other three quarterfinal series will begin as normal. However, the first game between LDLC ASVEL Féminin and Nadezhda will limit attendance to 1,000 fans, while ZVVZ USK Praha’s opener against Famila Schio will be completely closed to the public. Fenerbahçe and Bourges will face no such restrictions in their first game and proceed as normal; however, the second game of the series, which is to be played next week, will not allow attendance.

The games that are being played will still be streamed live on FIBA’s YouTube channel, with Fenerbahçe and Bourges leading off today’s lightened slate of action.

Matchup details: Fenerbahçe dominated Group B in the regular season, going 11-3 and winning the group by three whole games. As such, earning the No. 4 seed in Group A was a bittersweet victory for Bourges, especially as Natalie Achonwa recently left the team. Fenerbahçe continues to roll out a star-studded lineup including Chelsea Gray, Alina Iagupova and Elizabeth Williams; the Turkish club should be healthily favored in this series.

Matchup details: Alyssa Thomas has been incredible for Praha, and she’s the main reason why the team went 12-2 in group play, with both losses coming at the hands of Ekaterinburg. Schio isn’t nearly on Ekaterinburg’s level, but it did allow the fewest points per game (56.6) of any EuroLeague Women team this season, so we’ll see if that style of play can slow Thomas down — if it doesn’t, expect a victory for Praha.

Matchup details: Of the three games being played today, this one is likely to be the most competitive, at least from a seeding perspective. Nadezhda earned Group A’s No. 3 seed while Lyon secured No. 2 in Group B, and both teams are playing well heading into this quarterfinal. There are also some WNBA matchups to watch for, with Alysha Clark and Marine Johannès starring for Lyon and Erica Wheeler and Yvonne Turner representing Nadezhda.