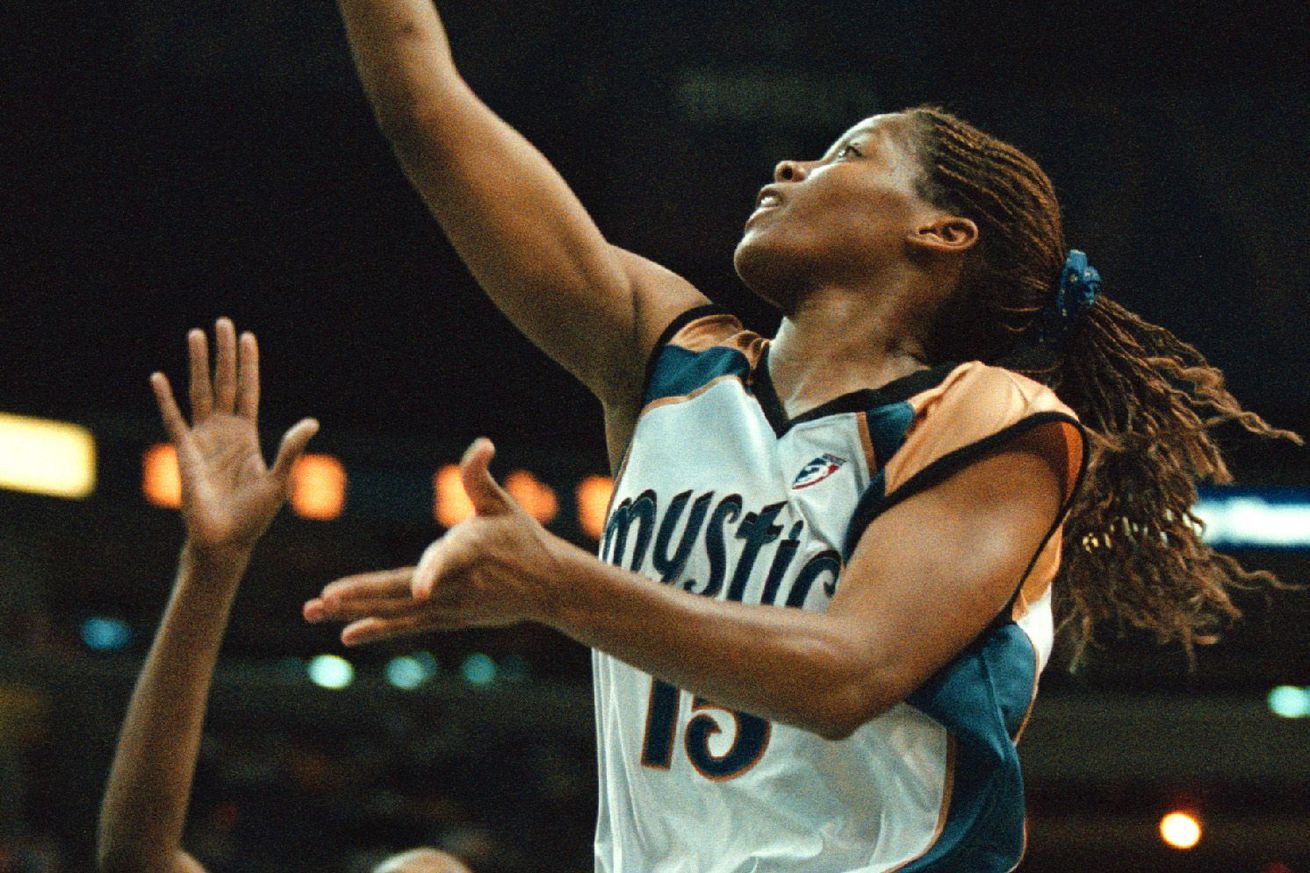 As the first women’s professional basketball player to jump from the ABL to the WNBA, Nikki McCray-Penson became a pioneering figure in the women’s game. | Photo by Rich Lipski/The The Washington Post via Getty Images

Based on her playing career and coaching experience, Nikki McCray-Penson is more than qualified to serve as head coach at Mississippi State. Expect her to make a significant impact in Starkville, both on and off the court.

In the fall of 1997, Nikki McCray made one of the most important transitions in women’s basketball history.

After leading the Columbus Quest to the inaugural ABL title, and winning the MVP award along the way, McCray —now McCray-Penson — decided to take her talents the WNBA. She became the first player to abandon the ABL for the WNBA, joining the newly-established Washington Mystics before the 1998 season.

More than 20 years later, she is making another notable move, leaving her post at Old Dominion to become the head coach at Mississippi State.

I’m so grateful and blessed for this incredible honor and opportunity to lead @HailStateWBK. My family and I are excited to be a part of the Bulldog Family and we can’t wait to get started! #HailState pic.twitter.com/Aob9AQ5uvr

Upon accepting the position, McCray-Penson announced:

It’s been a dream of mine to be a head coach in the SEC, and I’m so grateful and blessed for this incredible honor and opportunity to lead Mississippi State women’s basketball. This is a national brand with incredible people, a storied tradition and an outstanding community that is second to none. I am confident that my experiences as a coach and player have prepared me for this, and I will pour everything I have into our student-athletes and program. My family and I are so happy to be a part of the Bulldog Family and we can’t wait to get started.

While McCray-Penson’s track record as an assistant and head coach qualify her to lead the Bulldogs, the decisions she made during her playing career, including her ambitious jump to the WNBA, suggests she is the perfect coach for one of the best programs in women’s college basketball.

McCray made an impact as Old Dominion head coach

Ahead of the 2017-18 season, McCray-Penson took over an Old Dominion program that appeared to have plateaued.

After three seasons under McCray-Penson, the Monarchs were poised for a national breakthrough. By instilling in her squad strong defensive principles, McCray-Penson led Old Dominion to a 24-6 record for the 2019-20 season, strong enough to earn her the C-USA Coach of the Year award and consideration for the WBCA National Coach of the Year honor.

Before assuming control at Old Dominion, McCray-Penson served as an assistant coach for 10 seasons under Dawn Staley at South Carolina, giving her an intimate understanding of how Staley turned the Gamecocks into a national powerhouse.

Congrats @NikkiMccray15! You are natural born winner! @HailStateWBK you got yourself a great person, coach and community leader! @SEC @GamecockWBB look forward to continuing the rivalry! https://t.co/aoGOvewMLL

So, while McCray-Penson’s head coaching resume may seem a bit slim, her extensive experience with Staley at South Carolina supercharges her qualifications.

McCray-Penson’s pioneering playing career further suggests she is ready to take the reins in Starkville.

After emerging as a high school standout in Memphis, Tennessee, McCray-Penson matriculated the University of Tennessee in the fall of 1991. She thrived under the tutelage of Pat Summitt, establishing her as one of the nation’s top talents.

When the USA Basketball Women’s National Team was chosen ahead of the 1996 Olympics, McCray-Penson was an unquestioned selection and helped Team USA win a gold medal in Atlanta; she later would add a second gold medal at the 2000 Sydney Olympics.

Following the Atlanta Games, a professional career awaited and McCray-Penson was prepared to make the most of it.

When the ABL and WNBA were founded, many women’s basketball’s players were, understandably, merely grateful for the opportunity to play professionally in the United States.

Yet, McCray-Penson understood that basketball, even women’s basketball, was a business. As she would tell Sports Illustrated, “When you’re young, games are games. But around my junior year at Tennessee, I started viewing basketball as a business. I could make a living at it and be pretty successful.”

In the fall of 1996, McCray-Penson elected to join the ABL, signing a one-year $150,000 contract with the Columbus Quest. As noted above, she more than proved her worth, winning the MVP award as she led the Quest to the championship.

However, even as she had just turned in an impressive season in the ABL, the soon-to-be stars of the WNBA — Lisa Leslie, Sheryl Swoopes and Rebecca Lobo — were the nation’s most well-known women’s basketball stars.

So, while Columbus was ready to ink McCray-Penson to a long-term contract ahead of the 1997 ABL season, McCray-Penson — intrigued by the promotional power of the WNBA and the potential opportunities it presented — had other ideas.

Soon after the Quest offered her a contract she considered insufficient, McCray-Penson made the leap to the WNBA.

McCray self-determined her way to the WNBA

Unsurprisingly, her decision to depart the ABL for the WNBA inspired detractors. McCray-Penson was perceived as greedy, sacrificing supposed obligatory loyalty to the ABL for a bigger payday and platform from the WNBA.

People can say what they want about me. But I try to present myself in a positive way. I had to make the best decision for me, and that was joining the WNBA. It doesn’t have anything to do with money.

Speaking to Sports Illustrated, she further explained what motivated her move:

I had to put it in a business point of view. When it comes to something like that, you can’t let emotions interfere. It’s all about business.

In the WNBA, McCray-Penson would never match the peak success she achieved in her lone ABL season. Nevertheless, she was named a WNBA All-Star three times and became one of the league’s signature stars, especially during her four-season tenure with the Mystics. Before retiring in 2006, McCray-Penson also suited up for the Indiana Fever, Phoenix Mercury, San Antonio Silver Stars and Chicago Sky.

Ultimately, McCray-Penson expertly leveraged her talent to self-determine the course of the career. Instead of simply being grateful for the chance to play on U.S. soil or blindly loyal to the ABL — which folded in 1998 — she chose to go with what she believed she deserved.

And others followed, making moves of their own to the WNBA.

In a retrospective on the key moments of the WNBA’s first decade, the Hartford Courant’s Lori Riley credited McCray-Penson’s influence for the departure of ABL talent for the WNBA:

[H]er jump had started a revolution. The following spring, most of the top college players, including Nykesha Sales, signed with the WNBA. In November 1998, her [Columbus Quest] coach, [Brian] Agler, jumped to the WNBA, too. Two-time ABL All-Star Dawn Staley had already gone over to the WNBA in September.

Her mindset a few decades ago resembles that of the change-making athletes of today.

Players today, at increasingly younger ages, see basketball as a business, seeming unafraid to transfer from one collegiate program to the next or forego their senior season and jump to the WNBA.

As a head coach, especially one overseeing a program at a time when players may be looking to transfer, McCray-Penson may not appreciate that contemporary college athletes embrace such an approach. Yet, her experience with calling the shots on her own playing career should make her empathetic to the ambitions of young athletes.

It also should resonate with the athletes she recruits to Starkville. And the majority of the returning Bulldogs appear excited to suit up for McCray, taking to Twitter to welcome their new coach to town.

The majority of women’s basketball players in the WNBA and NCAA — including at Mississippi State — are women of color. Yet, women of color still lack requisite power within the game. As a player and coach, McCray-Penson has navigated traditional barriers and biases of race and gender to advance her career, modeling imitation-worthy autonomy. The race- and gender-based discrimination that long has bedeviled the state of Mississippi endows McCray-Penson with representational power.

While representational politics do not guarantee Mississippi State will remain a top team under McCray, they cannot be cast as irrelevant to the sustenance of the Bulldogs’ on-court success. McCray-Penson’s coaching mentor, Dawn Staley, has demonstrated this at South Carolina.

I would venture to say that the success of our program has allowed this state to unify in a way that nobody probably could have imagined. If you look into the stands, you see some of everybody — there, connected, linked up, making friends. And it’s a very beautiful thing to see. People that I spoke about in ‘The Players’ Tribune’ that didn’t step foot on this campus (before) and they’ll come to campus (now) because of women’s basketball. That’s barrier-breaking.