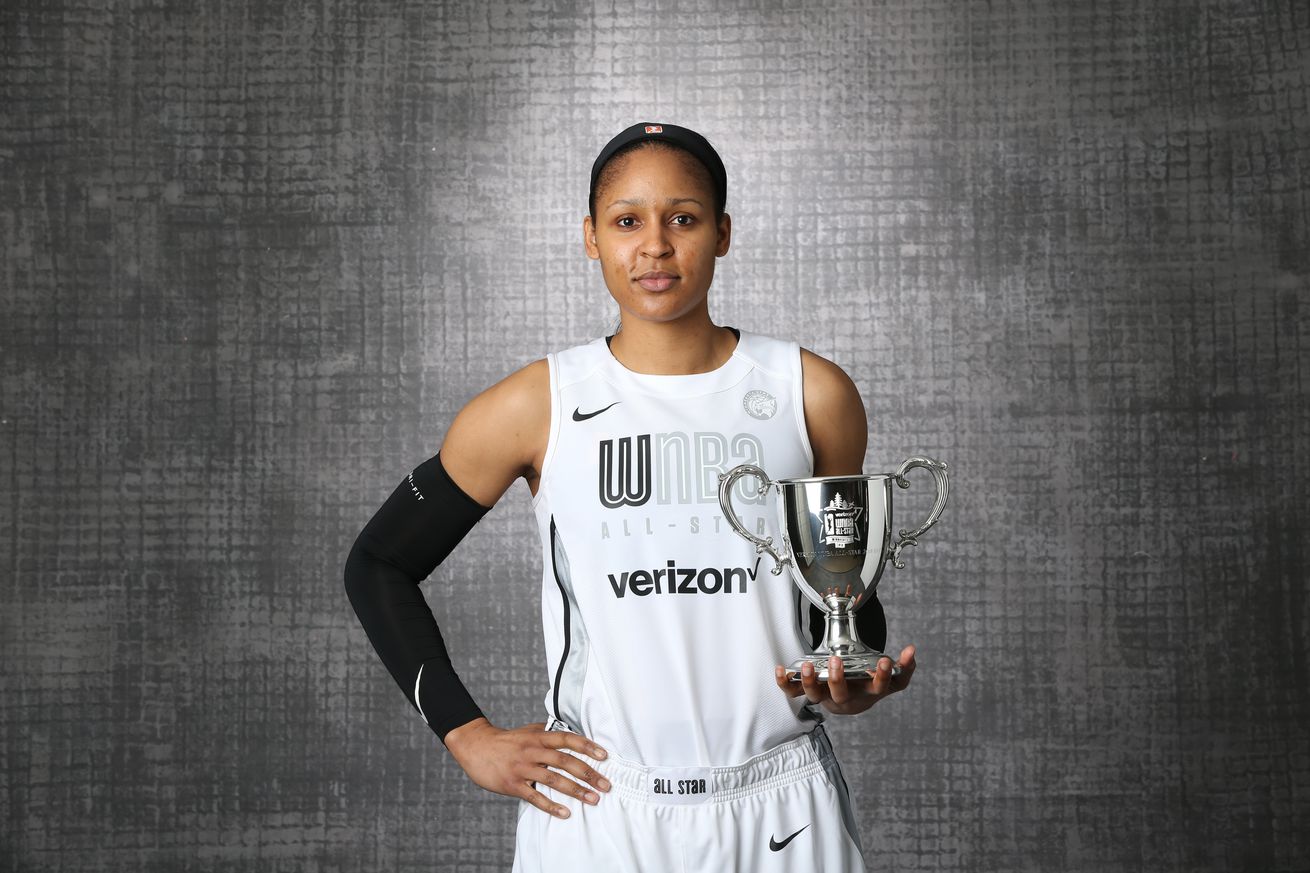 An All-Star as an athlete and advocate, Maya Moore shared her thoughts about public health and social justice with TIME. | Photo by David Sherman/NBAE via Getty Images

On Tuesday afternoon, Maya Moore participated in the most recent edition of the TIME 100 Talks, speaking with ESPN’s Pablo S. Torre and the New Orleans Saints’ Malcolm Jenkins about the role of sports and athletes in the struggle for racial justice.

In promotions for the most recent edition of TIME 100 Talks, Maya Moore was described, appropriately, as “athlete and advocate.” Since she decided to take an indefinite sabbatical from the WNBA to focus on her spiritual journey and social justice efforts, Moore’s advocate identity has become equal to her athlete one.

She joined ESPN’s Pablo S. Torre and the New Orleans Saints’ Malcolm Jenkins to reflect on the role sports and athletes can play in the country’s reinvigorated movement for racial justice.

Torre introduced Moore and Jenkins as “two essential voices” on “athlete activism and also criminal justice reform,” insisting to both, “Those are not abstract terms that have popped up on your social media feeds. These are things that you have been committed to for years and years. And you’ve been at the forefront of what’s become a real movement.”

Stationed in what looked like her living room and sporting a black Air Jordan t-shirt, Moore, once again, showed that she is just as effective explaining the emotion and urgency of the fight for racial justice as she is navigating a pick-and-roll or double team.

On making #BlackLivesMatter more than a slogan

Torre opened the conversation by citing a recent Pew Research poll that revealed a majority of Americans support the Black Lives Matter movement and then asked about the gap between supporting a popular slogan and supporting the major reforms required to make black lives, truly and fully, matter.

Moore insisted that transformation “comes in phases and parts,” expressing that she was encouraged by this shift in American popular opinion.

“That’s the beginning — is awareness — and acknowledgement of the truth of what’s happening,” Moore stated.

“That’s the first step,” she added, before emphasizing the importance of turning to experts who have studied matters of racial reconciliation to achieve the additional, necessary steps.

For Moore, “building a real community in a way that our country’s never seen” will be the ultimate fulfillment of the #BlackLivesMatter ethos.

On communicating the importance of #DefundThePolice

Torre then turned to the topic of defunding the police and asked Moore about her comfort with this “controversial” phrase.

“Communication is so key in making sure we understand terms,” Moore said, suggesting that many Americans, in a “knee-jerk reaction,” associate defunding the police with devaluing the police.

“Most people in America have an understanding of police from afar, except if you’re in black and brown communities,” she continued. “This is actually going to better for everyone. We actually want to equip you and empower you, police, to be the best form of yourselves.”

Moore then employed a sports metaphor to better illustrate the concept, describing the importance for an athlete to develop her strengths to best contribute to her team’s success. “I want to stay in my lane and thrive so we can actually be the best team possible,” she stated.

On staying mentally well while staying engaged in the struggle

Torre asked Moore how she copes with the often-depressing news that floods timelines, especially the too-frequent images and videos of black pain and death. While witnessing such travesties can impel action, as exemplified by the protests that ignited after a Minneapolis policeman murdered George Floyd, this media also causes trauma and terror.

“I think there’s a misconception that black people are just naturally stronger and able to take a lot of heavy things,” Moore said. “It’s not real. We are human beings just like everyone else who feel and hurt and aren’t supposed to be enduring this amount of trauma.”

She seeks to maintain mental balance by “making sure that I’m spending more time with people than I am with a screen,” although she admitted COVID-19 currently complicates this advice. She also stressed the importance of having relationships in and across one’s community “as way to keep you filled and in touch with life.”

Torre asked Moore how she feels about the fact that “the thing you sacrificed your career to pursue” — racial justice and criminal justice reform — now stand at the forefront of societal conversations.

Moore said, “It feels like we are holding up that Final Four trophy, but there are still a couple of steps.” https://t.co/XaBg22j7F6

“My faith is at the core of everything I do,” Moore said. “(I was led) in a direction ahead of time … to be a helpful voice during this time. I’m grateful for the hard things that I have walked through, (including) fighting for Jonathan’s freedom.”

All of this culminate because of her ongoing self-education process. “I wanted to do the work behind the scenes,” she said. “I wanted to go through preseason and practice before I came out to the game.” She says the work has given her a “sense of authenticity” in this fight.

“What I did and what my family did was just seeing someone who isn’t exactly like you,” Moore said of how her educative and emotional commitment to Irons’ cause developed. “I stepped into his world a little more and learned more about him and because of that journey and that relationship I was motivated to learn because that’s what love is,” she said.

My journey, at the heart of it, is humility — to say, ‘I don’t know everything. My way of life isn’t the ultimate best way. I can learn more about other people’s cultures, other people’s stories. And when I do that I become more of who I was created to be.’ And then I can use my gifts to empower … other people who have been systematically dehumanized in our country for centuries.

“I’m just grateful to be able to put on display what it looks like … when you actually do the work of relationship and moving the needle forward in this really, really important matter,” she concluded.

On understanding, and building on, Colin Kaepernick’s blueprint

After Torre asked Jenkins his thoughts about the NFL’s apparent about-face on Colin Kaepernick and his national anthem protest, he asked Moore to reflect on how sports have tended to “value and prioritize … the feelings and comfort zone of white fans.”

Moore again returned to the idea of relationships. “Sports is this created thing that bring people together, but in kind of a surface way,” Moore said. “And so what we’re really bumping up against now is a culture clash.”

She then discussed the concepts of “cultural competency” and “cultural humility,” as theorized by Dr. Anita Phillips, as tools for cultivating cultural understanding. Moore elaborated on the importance for the majority culture, meaning white people, to practice “cultural humility” when encountering potentially unfamiliar minority cultures in the space of sports.

“If we’re going to gather together and enjoy the benefit that sports brings as a diverse setting, that needs to be real,” Moore said. “It can’t just be pretend.”

Moore credited Kaepernick for “spark[ing] something” that “made us more aware of the cultural deficiencies we have in understanding each other and being aware.” She encouraged the NFL to take advantage of the “opportunity to increase cultural competency and increase cultural awareness” and help the majority culture to “embrace learning and listening.”

“Sports can be such a cool place to do that because it really can make us America,” she said, “having that unity within diversity.”

To hear more from Moore, you can view her conversation with Torre and Jenkins here.