Gamecocks have impressed since earning No. 1 spot 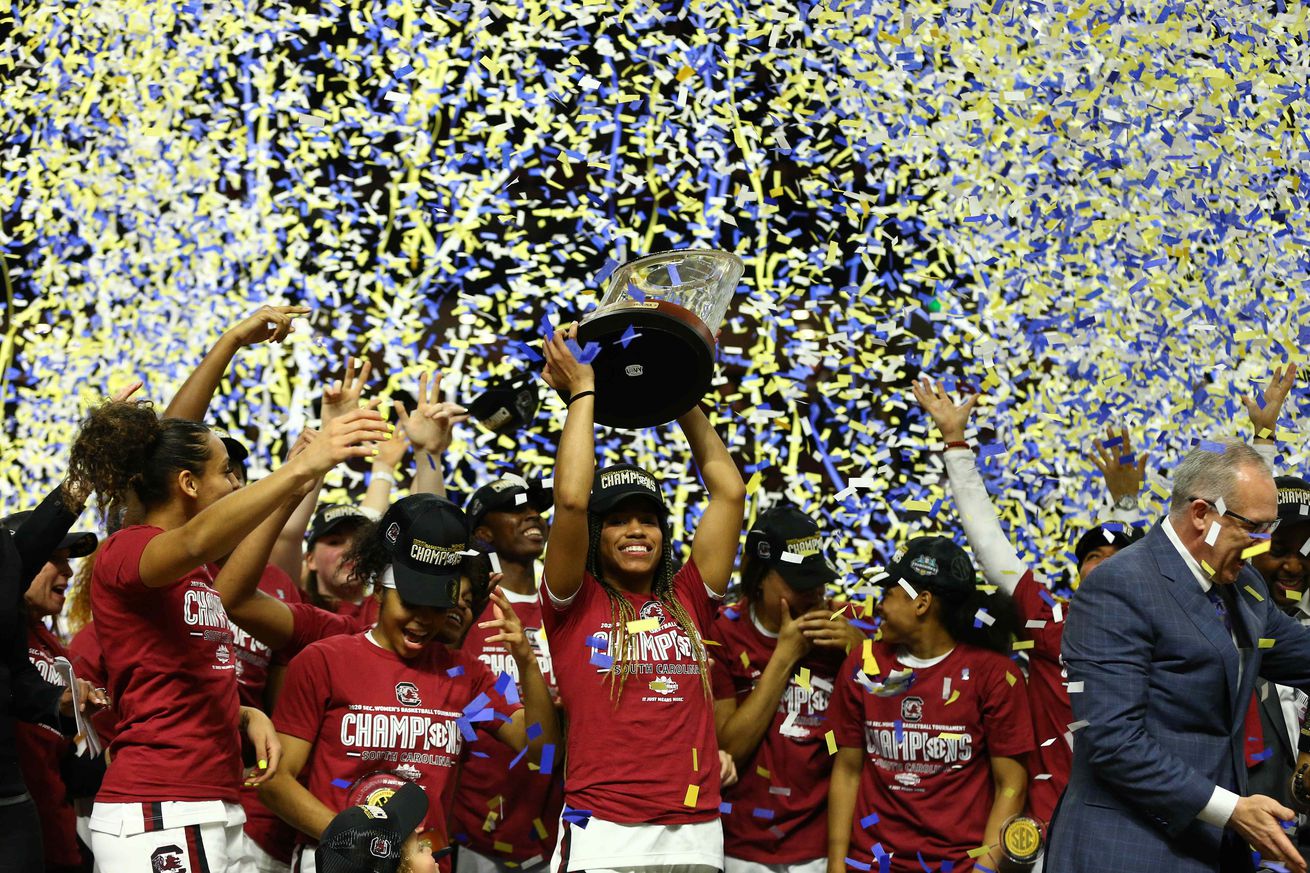 In the first ten weeks of the season, there was some shuffling around at No. 1, but South Carolina has had an iron grip on the spot since Jan. 13. The Oregon Ducks and Maryland Terrapins join the Gamecocks with plenty of momentum themselves.

It’s always fun to wake up on Monday and know that new AP rankings are coming out soon. In the past couple of seasons, there’s been no one dominant program, and the rankings can shake up considerably from one week to the next. Now that the regular season is over and the NCAA Tournament is fast approaching, here’s a Week 19 analysis of some of the Top 25 teams that have risen and some that have fallen.

The Gamecocks won the SEC Tournament with an exclamation mark, defeating the No. 9 Mississippi State Bulldogs 76-62 in the championship game. South Carolina is the only Power 5 team in the nation to have gone undefeated in conference play (regular season and tournament). The No. 3 Baylor Lady Bears lost to the Iowa State Cyclones in their regular-season finale on Sunday, so they won’t be able to accomplish the feat. South Carolina’s dominance of one of the best conferences in the country clearly has the team trending upward entering the NCAA Tournament.

The Ducks, who were the preseason favorites to win the NCAA Tournament this year, won the Pac-12 outright on Sunday. They did so by dominating the Stanford Cardinal 89-56 in the tournament’s championship game.

Oregon has had a case for being ranked ahead of Baylor for a while now, and the then-No. 2 Lady Bears’ loss to the Iowa State Cyclones on Sunday ensured the Ducks would rise to from No. 3 to No. 2. Oregon is riding just as much momentum as South Carolina right now, and the sky is the limit for the Ducks if they perform at their best.

For the third straight season, the Ducks are Pac-12 CHAMPIONS! #GoDucks pic.twitter.com/XmT24r0DHC

The Terrapins rose two spots this week, returning to the No. 4 ranking they were given in the preseason. They are projected as a one-seed, according to Charlie Creme’s bracketology for espnW, but their reputation lags behind South Carolina, Oregon and Baylor due to their shaky start to the season.

If not for an Ashley Owusu layup with three seconds to go against the James Madison Dukes on Nov. 13, the Terps would have started the season at 1-2. Owusu, the Big Ten Tournament’s Most Outstanding Player and the conference’s freshman of the year, saved Maryland’s one-seed chances from the brink of destruction in that early-season game and the rest is history. The Terps are one of the more unique teams in the country with their constant defensive pressure, and when they are hitting their shots they are tough to beat.

They stayed the course.
They stayed committed.
They led the way back #UnitedPursuit pic.twitter.com/ex82oEZKlB

The Wolfpack rose all the way to No. 4 on Feb. 10, but as has been the theme of the season for many teams, they gave their fans whiplash by losing two in row right after, including a contest against the unranked Georgia Tech Yellow Jackets.

But now NC State can relax a little knowing that winning the ACC Tournament will probably grant them a two-seed. They looked really good in the ACC championship game, with Aislinn Konig and Elissa Cunane making up for shaky starts with stellar finishes. The Wolfpack got Florida State’s best effort and still won, raising their ranking two spots.

The Seminoles failed to capture the ACC crown, but their upset over the No. 6 Louisville Cardinals in the semifinals is a sign that they can do some damage in the tournament. The Seminoles were this week’s highest risers, moving up four spots. Kiah Gillespie (25 points and nine rebounds) was phenomenal in the championship game, as were Nicki Ekhomu and Nausia Woolfolk, but the team still needs to get more contributions from its supporting cast.

The Aggies fell four spots this week and seven spots over the past two weeks. They have lost three games in a row, including a one-point loss to No. 24 Arkansas in their first SEC Tournament game on March 6. The Aggies were showing a lot of promise two weeks ago, but have let the positive vibes slip away.

The Hawkeyes lost to the Ohio State Buckeyes in the Big Ten Tournament quarterfinals, allowing Maryland to separate itself from the pack. Big Ten Player of the Year Kathleen Doyle scored 16 points to lead the Hawkeyes but was 1-of-5 from deep. Iowa was not expected to finish third in the conference like it did and Doyle was not expected to win Big Ten Player of the Year. The Hawkeyes surprisingly put together a great regular season, but now they have lost all their momentum and declined two spots in the rankings.

The Cardinals’ loss to Florida State in the ACC semifinals took away their shot at a one-seed and dropped them two spots in the rankings. Louisville avenged its Feb. 9 loss to the Syracuse Orange in the quarterfinals and then lost to a good Seminoles team. But the Cardinals had one-seed aspirations ever since beating Oregon on Nov. 30 and fell short of their goal of winning the ACC outright. They will have a chip on their shoulder entering the NCAA Tournament.