Girls against the boys for IWGA Athlete of the Year

Awards season usually sees women and men going for separate prizes, but more and more the contests pits athlete against athlete. Two martial arts women from Karate and Muaythai are up for IWGA Athlete of the Year in an online voting contest.
The IWGA are behind The World Games, a huge multi-sport event taking place every four years. If that sounds like The Olympics, that’s because it is in essence The Olympics for non-Olympic sports.

Muaythai – under IFMA  – entered into The World Games for the first time in 2017, which now means those fighters get to compete on a much bigger stage for titles like this. I do some work with IFMA at events so I’ve gotten to know Svetlana Vinnikova (Russia) and she’s a star in the making. Like a lot of fighters, you’d never tell to look at her that slicing people with elbows and kneeing them in the guts is that rocks her boat. But that nice-girl look hides someone who’s left the biggest names in two weight divisions behind her – including Antonina Shevchenko, Nili Block, Gia Winberg and so on.

Karate is a sport on its way to the Olympics, but still has one foot in The World Games events. Sandra Sanchez (Spain) stands at first in the world Kata rankings, with 1,500 points over her nearest rival. She’s been on the podium at every event shes entered since 2014 which is a serious record , especially for someone who only took up compeditive Kata about six year ago. 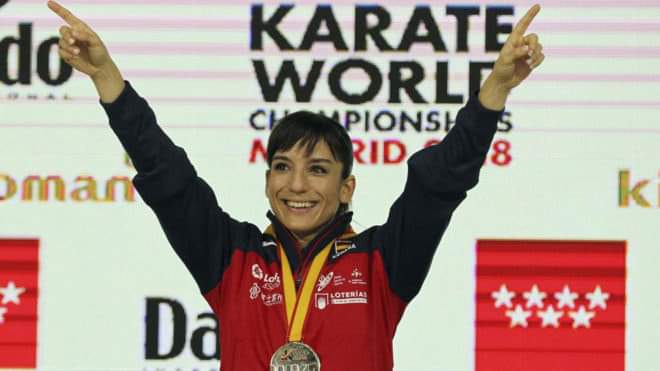 Muaythai won in 2016 with Sofia Olofsson whose career has exploded since, really good to get that kind of exposure for women in less well-known sports!

You can vote both one or both of these women on The World Games website. Its a crazy contest as they ask for supporters to vote every day in January, and usually the sport with the most focused and dedicated fans win!