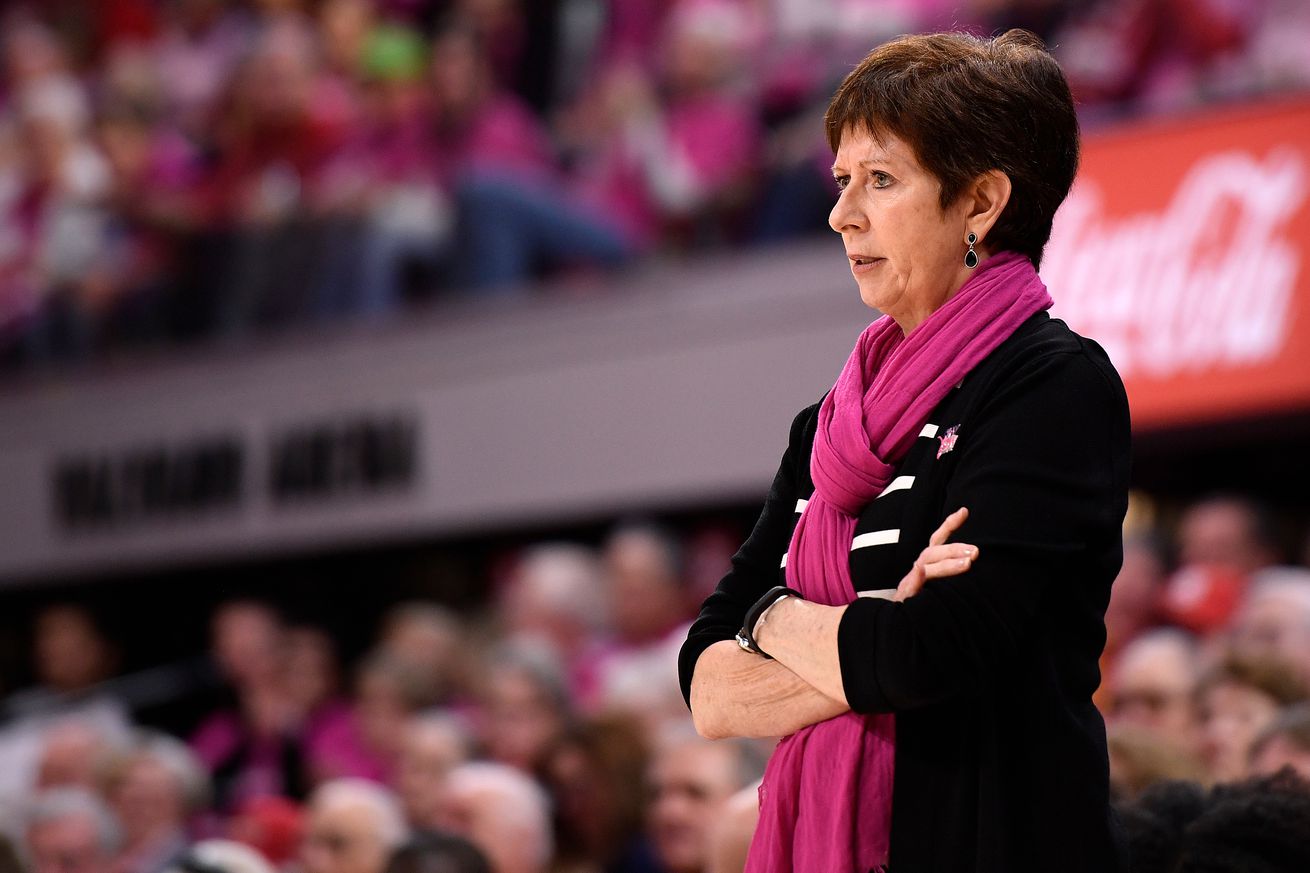 Over the course of her 33-year coaching career, Muffet McGraw demonstrated her acute understanding of the power of women in sports. | Photo by Lance King/Getty Images

At the 2019 Final Four, Muffet McGraw went viral for her words on gender inequality. Throughout her 33-year coaching career at Lehigh and Notre Dame, McGraw modeled how sports can empower women. The attitudes and actions of her former players demonstrate her influence.

After decades as a head coach in college women’s basketball, Muffet McGraw understood this was impossible.

McGraw exemplified how women in sports can communicate and facilitate the enduring quest for women’s equality.

Lucky to have had you.

“When is it going to become the norm instead of the exception?”

At last year’s Final Four, McGraw delivered her now-famous thoughts on gender inequality in the coaching ranks, asserting without apology:

Girls are socialized to know that when they come out gender roles are already set. Men run the world. Men have the power. Men make the decisions. It’s always the men that is the stronger one. And when these girls are coming out, who are they looking up to to tell them that that’s not the way it has to be? And where better to do that but in sports?

McGraw insisted on representation and the powerful potential of women’s sports to provide this representation. Women in sports can normalize the right women have to hold power and be powerful.

She’ll be remembered as a women’s basketball pioneer and legend – and beyond the hardwood, as a voice for women in sports.#ncaaW | @MuffetMcGraw @ndwbb pic.twitter.com/sxsQE3Mt4i

Yet, long before she made this public plea, McGraw had inculcated her athletes with such principles and possibilities, steadily seeding the change she longs to see.

Former Notre Dame standout Arike Ogunbowale made this clear in an essay for The Players’ Tribune, writing:

That’s something that we got for four years. Every woman that’s passed through that program has heard a version of that speech. She gave it just about every day….During practices or during games, or whenever she was around us, she was always dropping little nuggets that you could just apply to life. One of her biggest things was, she always always impressed on us the idea that our platforms mattered, that we needed to use them for good, especially for women.

Before becoming head coach at Notre Dame in 1987, McGraw coached five seasons at Lehigh University, where her players included, among others, WNBA commissioner Cathy Engelbert.

Engelbert, who has modeled McGraw’s message by serving as the CEO of Deloitte before assuming leadership of the WNBA, told The Athletic, “I still call her Coach McGraw. Sometimes I call her Muffet, but she has had such an impact on the game and not just the game, but on her women’s empowerment messaging.”

leadership on and off the court! #Grateful for all @MuffetMcGraw has done for so many of us!! https://t.co/xRoZsAvlbP

At Notre Dame, McGraw began to establish the Fighting Irish as an elite program the late 1990s, a status that was confirmed when Ruth Riley arrived in South Bend in 1998.

By 2001, a squad led by Riley and Niele Ivey (McGraw’s hand-selected and well-deserving successor) claimed the national championship.

Riley, who now provides intelligent studio analysis and radio commentary for the Miami Heat, reflected on her former coach’s legacy, writing for ESPN:

Muffet is a pioneer, a trailblazer impacting the lives of women and girls by using her platform to emphatically and unapologetically declare their value and worth. With the same passion and fiery Irish spirit, she takes on an opponent far greater than one ever faced on the court: the biases, behaviors, laws and stereotypes in which inequality is bred and thrives. With a strong, steady voice of proclamation, she speaks up not just for the women she is leading in an IRISH jersey, but also her voice echoes down the halls of injustice for girls and women everywhere.

What I had to say about ⁦@MuffetMcGraw⁩ couldn’t fit in a tweet….so here is my tribute to one of the greatest women I know. What Muffet McGraw means to me — Ruth Riley’s tribute to the Notre Dame coach – via @ESPN https://t.co/dDtFBYQpBz

Skylar Diggins-Smith, who starred at Notre Dame from 2009 to 2013, also has manifested McGraw’s mission, becoming one of the WNBA’s leading spokeswomen. In addition to calling out social media sexism, advocating for fair compensation, arguing for the importance of paid maternity leave and holding organizations to higher standards, she also has used her platform to share her struggles with postpartum depression, addressing an uncomfortable and often overlooked issue that many women encounter.

How McGraw practiced what she preached

As indicated in her Final Four press conference, McGraw recognizes that gender inequality is intersectional and impacts women in different ways depending on race, class and/or sexual identity. “I’m getting tired of the novelty of the first female governor of this state, the first female African American mayor of this city,” McGraw said.

The actions taken by Notre Dame players before 2014 further highlight this intersectional understanding of women’s rights, mandating that a fight for racial justice must be part of the fight for gender justice. During warmups that year, her players wore “I Can’t Breathe” t-shirts in protest over the police violence against African Americans.

Brianna Turner, then a freshman at Notre Dame, expressed appreciation for McGraw’s support for players’ desire to wear the shirts:

The fact that coach allowed us to do that, to give that opportunity to young women to use our platform as athletes to voice something like that said so much to me. She could have easily said the court is not the time to make a statement like that. But she didn’t. She encouraged us to use our voices.

Turner took to social media to heap further praise on McGraw after the legendary coach announced her retirement.

On the court a relentless, fierce competitor and off the court an advocate for women’s equality and rights. Couldn’t of asked for a better person to learn from during college ☘️ https://t.co/HGu8e1TnSk

By ensuring that Niele Ivey succeeds her at Notre Dame, McGraw is further actualizing her values, turning over one of the most visible positions in college women’s basketball to a woman of color.

At her introductory teleconference, Ivey said to McGraw:

I’m here because of you; you believed in me. You fostered my development and you instilled the confidence in me to prepare for this moment. You gave me my first opportunity, and there are no words to properly express the amount of love and admiration I have for you. I hope I make you proud.

What next for McGraw?

McGraw’s announcement made clear that she is retiring “from coaching only.”

While she has ruled out a run for political office, she intends to continue to empower women, sharing with ESPN:

I’m ready to move away from basketball. I’ve done it for over 40 years, and I’m looking forward to doing something else. I’m open to so many things. Anything that helps women, I’m going to be there.

At least for a while, she should follow the advice of Ogunbowale (when it is safe to travel, of course):

Now she can finally enjoy what she’s built over all of those years. We stressed her out literally 365 days a year. That’s 365 days a year for 33 years that she’s been thinking about this team. I don’t know what she’s going to do with all this new free time. I need her to go to an island with her husband for at least a month and just enjoy life!

To the greatest coach I’ve ever had, THANK YOU!! Enjoy retirement ❤️@MuffetMcGraw pic.twitter.com/oVOxIvKejG