‘I can’t breathe’: The two realities of Kelly Graves and George Floyd 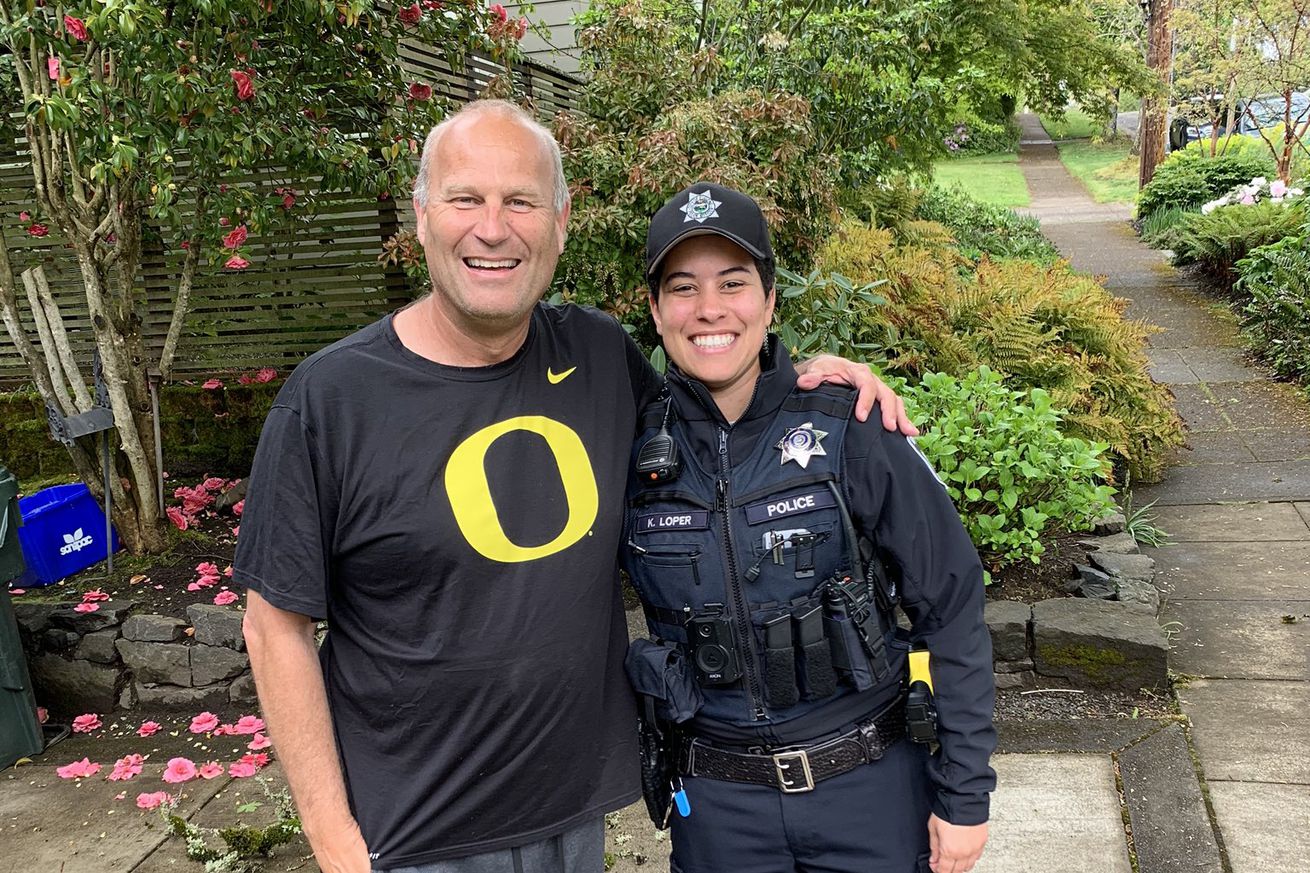 In April, Oregon Ducks head coach Kelly Graves in a tone-deaf move tweeted a photo of himself playfully “getting arrested” by former Duck Katelyn Loper, now a police officer in Eugene. One month later, police, this time in Minneapolis, killed yet another black man. His name was George Floyd.

WARNING: This post contains a graphic image of police violence.

The haunting words gasped by the late Eric Garner as he was chocked to death by a police officer in Staten Island, New York. It was July 17, 2014, and Garner had been accused of selling “loosey” cigarettes.

Garner pleaded for his life but Daniel Pantaleo would not loosen the grip of his unlawful chokehold until Garner, 44, was dead. It would take four years almost to the day of Garner’s death for Pantaleo to face a disciplinary hearing.

In spite of the fact that the chokehold Pantaleo used was banned in the 1990s, federal prosecutors announced exactly one day shy of the five-year anniversary of Garner’s death that they would not bring charges against the rogue officer. In August of 2019, more than five years after Garner’s death, the New York Police Department announced that Pantaleo would be fired and stripped of his pension, prompting the ire of police union president Patrick Lynch, who defended Pantaleo in a press conference as “exemplary.”

In the years between Garner’s death and the exoneration of the man who murdered him, NBA players used their platform to bring national attention to Garner’s case, WNBA players used theirs to profoundly denounce the continued murder of black people by police and NFL quarterback Colin Kaepernick took a knee.

People may recoil from the idea that their words or actions are racially insensitive or racist, but ingrained racism is a cold fact of our society worthy of long overdue national reckoning.

All protests were peaceful, yet all athletes involved received a mix of admiration and backlash, with WNBA players initially facing fines by the league (later rescinded) for donning Black Lives Matter/Change Starts with Us tees during warmups rather than those with team logos.

For daring to take a stand following the slaying of Philando Castile in 2016 by a Minnesota police officer, the Minnesota Lynx played a game without adequate security. The police officers assigned to work the game apparently took exception to declarations by the players — most of whom are African American or women of color — that Black Lives Matter/Change Starts with Us, and walked out.

In 2017, the officer who shot Castile to death was acquitted of manslaughter charges.

In a cyclone of violence so polluted with dead black bodies, chronology is lost. It becomes hard to recall which living and breathing son or daughter, sister or brother, husband or wife, girlfriend of boyfriend became a dead body first. Was it Michael Brown right after Garner or was it 12-year-old Tamir Rice? Who was killed by police first — Philando Castile or Alton Sterling?

On the surface, the timing of these slayings is unimportant. More deeply, the inability to recall the timing underscores the frequency of the slaughter. It emphasizes the rate at which unarmed black people are turned into corpses, and the speed with which the lives of the loved ones the murdered leave behind are forever altered if not destroyed.

George Floyd is the latest black man to have his life extinguished by a police officer. A month before his murder, Oregon Ducks head coach Kelly Graves tweeted a photo of himself playfully “getting arrested” by Katelyn Loper, a former basketball player in his program who is now a police officer in Eugene, Ore.

“I was charged with my hair growing too long & gray or all those sprints I used to make her run,” Graves wrote of his pretend arrest on Twitter.

The photo and the joking sentiment showcases the kind of tone-deaf racial insensitivity that derives from the privilege and entitlement afforded white people in America. It also emphasizes the two disparate realities that white people and black people have with police.

A white man, Graves, can have fun with a cop and feel safe pretending to get arrested for fictitious crimes because his real-life experience with law enforcement is nonchalant.

Officer Katelyn Loper is keeping the streets of Eugene safe. Don’t know if I was charged with my hair growing too long & gray or all those sprints I used to make her run Katelyn went 8-12 from 3-Pt & had 33 pts in my first game as Duck coach #OnceADuckAlwaysADuck #GoDucks pic.twitter.com/NJMU55ud6V

It remains notable and unacceptable that no one in the Oregon program deemed Graves’ photo insensitive to the very different reality black people in this country face when encountering police. It remains notable and unacceptable that neither Graves nor a host of other coaches at top-tier programs saw fit to tweet or retweet against the continued police killing of unarmed black people.

This is especially notable and unacceptable considering the number of black athletes who have contributed to the Ducks’ wins and, therefore, to Graves’ $785,000 salary in 2019. The same holds true for all high-profile coaches and athletes whose earnings derive from the contributions of black colleagues. Yet, time and again, they ride the wave of silent complicity rather than use their platforms to denounce the slaughter.

And beyond the big-money worlds of collegiate and professional athletics, white people everywhere must consider the impact of their silence on the black friends and colleagues they claim to like and respect.

VIDEO: What your silence says to your black friends

As with Castile, Floyd died in the custody of police in Minnesota. Instead of being shot to death like Castile, “Floyd, 46, died on Monday after being handcuffed and pinned to the ground by a white police officer who pressed his knee on Mr. Floyd’s neck for several minutes,” according to The New York Times.

Like Garner, Floyd pleaded for his life and muttered, “I can’t breath.” Bystanders pleaded with the officer to remove his knee from Floyd’s neck and for the three other officers on the scene to intervene, which none did.

Unlike the Garner case that took five years for the officer who killed him to be fired, the Minneapolis Police Department fired the four officers involved in Floyd’s slaying right away. Yet, those officers have not been brought forth on criminal charges and the mayor of Minneapolis is calling for that to happen.

It is yet to be seen whether charges will be brought and, more importantly, if they will stick. As seen in Garner’s and Castile’s cases, and those of many others, police officers regularly are acquitted of murder and manslaughter charges when the victims are black.

The impunity surrounding officers who kill unarmed black people furthers the scourge. It empowers and encourages their sense of entitlement to kill black people — many of whom are unarmed and have been found to have committed no crime other than those brutally imagined in the minds of white cops.

Meanwhile, because of silence and inaction by those unaffected by these brutal realities, cities burn to the ground, with communities most affected now unwilling to be shamed into silence.

That officers repeatedly deem the victims of their deadly violence to be dangerous, and insist that they were in fear for their lives as they choked, kneed or shot their victims, is a function of racism.

Yes, all police officers, just like all people in this society (you and me, both) have threads of racism living inside of them. It is a result of living in a society built on colonization and the subjugation of Africans brought to this country and declared three-fifths human to justify their enslavement and forced labor. And don’t forget the European colonizers’ decimation of the Indigenous population that inhabited the land they eventually stole.

In terms of basic cause-and-effect reasoning, there is no way anyone in a society stitched together with the coils of institutionalized racism could avoid adopting racially insensitive or racist views. They have been seared into the collective psyche across centuries and stem from the the white supremacist beliefs — once upheld by law — that African Americans are subhuman.

People may recoil from the idea that their words or actions are racially insensitive or racist, but ingrained racism is a cold fact of our society worthy of long overdue national reckoning.

So, if police officers see a black person driving, walking, shopping, standing, existing and feel afraid, it the racism, not the reality.

The same goes from people outside of the law enforcement community who see a black person doing everyday things while black — sitting in their own home, like Breonna Taylor was; knocking on a door in search of help following a car accident, as Renisha McBride was; jogging down the street, like Ahmaud Arbery was; knocking on the wrong door, as teen Omarian Banks was; walking home from a convenience store, like Trayvon Martin was — and feel afraid or claim to feel afraid, and then pump that person with bullets.

What spills out, and why

The fear of an unarmed black person engaged in mundane activities is the racism.

As author Glennon Doyle shared on Instagram, from her book Untamed:

“She got bumped,” Doyle wrote in the comments, referencing Amy Cooper. “Racism spilled out because she is filled with it. That is what happened.”

But we’re all filled with it, to some degree. How would we not be?

So, instead of recoiling from or denying that racism lives inside all of us, we can choose to accept the cold facts. Then, and only then, can we challenge and change how we view others as we move through the world. Sure, there must be changes to policing policies, with priority given to eradicating the systemic issues eating away at the integrity of law enforcement institutions. But these changes will not stick if individual law enforcement officers are denying rather than examining their racial biases and prejudices — no matter how subtle, no matter how pronounced.

We must “work to change what’s inside us,” Doyle writes. And that goes for everyone, not just those working in law enforcement. For the “I’m not racist” deniers, the first step is to develop the willingness to look inside.