Jesse Owens vs. Hitler is the ultimate underdog story 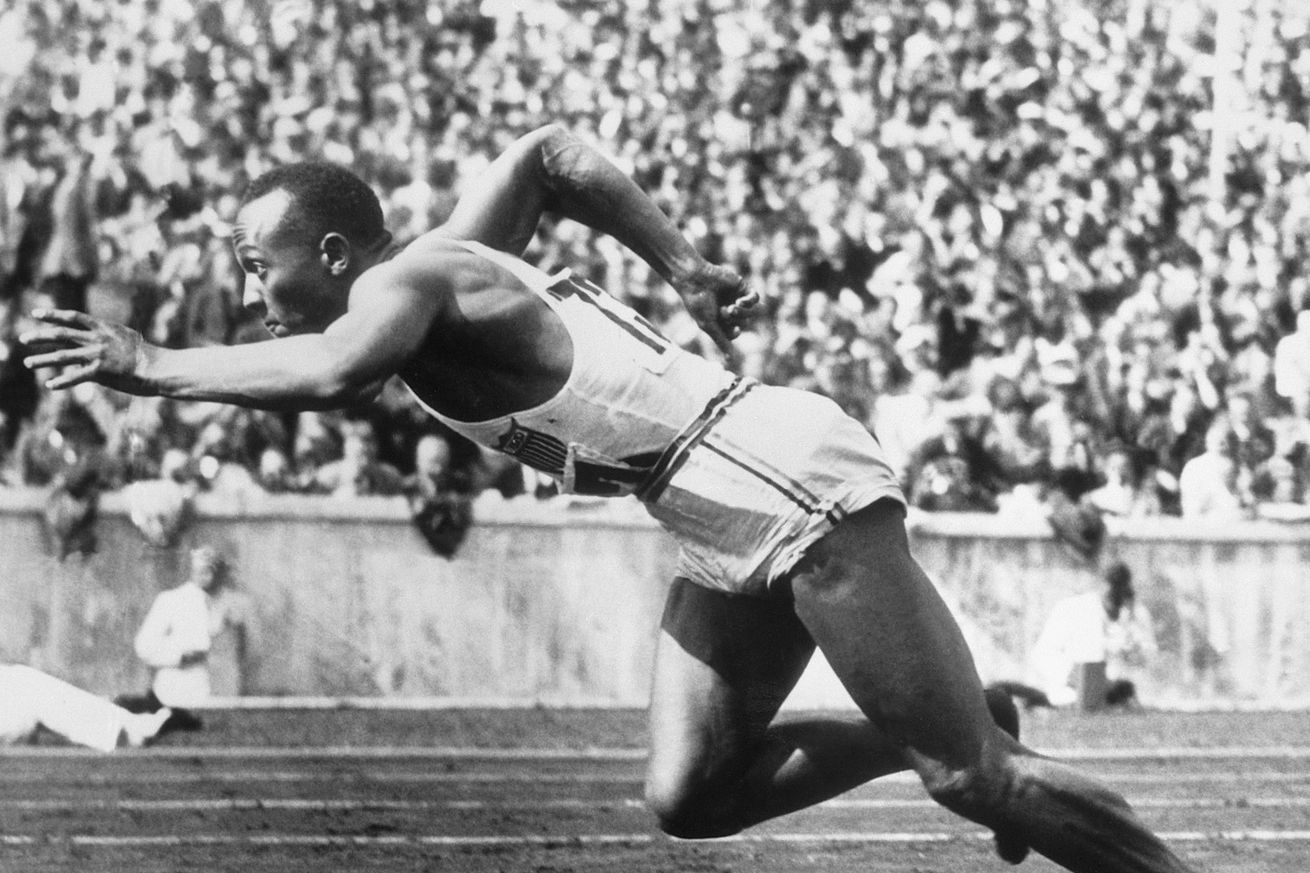 And other musings about quintessential underdog Jesse Owens, underdog psychology and theories about why underdogs win.

Athletic achievement has a way of silencing haters.

For legendary Olympian Jesse Owens, the haters happened to be Nazis, in Germany, during the 1936 Olympics in Berlin. Adolf Hitler conducted the opening ceremony.

As Owens lined up for the biggest races of his career, the crowd chanted and threw the Nazi salute, swastika-embroidered flags flying high. Yet, Owens managed the ultimate flex, according to Scott S. Smith for Investors Business Daily, who wrote: “His four gold medals crushed Hitler’s delusions.” (1)

Delusions of Aryan white supremacy, of course, with the Olympic Games serving for Hitler as an international proving ground. Some members of Team USA athletes were displeased that the U.S. did not boycott the games because Hitler was none too pleased with America including black athletes on its national teams.

Germany won the most medals overall, 89, with the U.S. placing second in total medal count, with 56. “But it was the African American participants who helped cement America’s success at the Olympic Games.” (1) For coveted gold medals, Germany won 33 and the U.S. brought home 24. African-American athletes contributed to that haul, with Owens winning three individual gold medals (100 meter, long jump, and 200 meter), and a fourth with the 4 x 100-meter relay team.

Owens also broke two Olympic records en route to four trips atop of the medal stand, where he stood next to German athletes and officials whose arms were outstretched in Nazi salute. “The greatest moment of all, of course, was when we knelt and received the Wreath of Victory, and standing there facing the stands we could hear the strains of ‘The Star-Spangled Banner,’” Owens said of the experience. (1)

For Owens, victory had come on muddy tracks in a stadium filled with 100,000 jeering haters who eventually chanted his name in delight to the führer’s, well, fury. Still, celebration of his pinnacle achievements was marred by Nazi salutes and swastika flags. But perhaps Owens was able to not just survive the 1936 Olympics but dominate on the world stage because of the challenges he faced and overcame well before arriving in Berlin.

Born the grandson of a slave and the child of sharecroppers, Owens took to running because it was one of the only free outdoors activities his family could afford. He dominated his high school track meets and attended Ohio State to live close to his family, which had moved from the South to Cleveland. With the university not offering scholarships for track and Owens already being married with a child, he worked odd jobs: “an elevator operator, waiter, service station attendant and as a page in the legislature.” (1) Professional sports were not integrated at the time Owens was entering his athletic prime, leaving a quest for Olympic glory the primary way he could make a name for himself.

Post-Berlin, Owens competed in exhibitions against race horses and worked for a time as a gas station attendant.

The first Games for which he was eligible to compete just so happened to be in Germany under Hitler’s rule. Many would have cracked under the hostility and abuse he faced in 1936 Berlin, but Owens did not falter. Instead, he used his position as the “ultimate underdog” (1) to his advantage — running to prove his human equality, winning four gold medals and breaking two Olympic records along the way.

Was his position as the “ultimate underdog” precisely the reason he prevailed?

The unassuming nature of an underdog feat is attractive to the masses.

In conversation with Maclean’s about his book David & Goliath: Underdogs, Misfits & the Art of Battling Giants, Malcolm Gladwell described the need to challenge the “instinctive ideas about what is an advantage and what isn’t … Big and strong and well-armed is not always best. That’s just our default position, and it’s an erroneous one.” (2) It is a concept sports enthusiasts understand well, and it’s at the root of why so many — whether in sports, politics, entertainment or some other realm — pull for the underdog rather than the competitor with the perceived advantage.

Or, outwomanned — but point taken.

“[I]t’s much easier for us to identify with the underdogs than top dogs because that’s where most of us fit in life,” Douglas S. Looney wrote in Christian Science Monitor. (3) “We fail and we dust ourselves off and we try again.” Digging deeper, picking at the quality of human life under man-made institutions and constructs (whether this was Looney’s intention or not), he added: “We fail and lie in the weeds for a spell and then try again. We are underdogs from dawn to dusk and then some. We understand what it’s like to have a slim chance of success.”

Well, that’s a bleak outcome of life, and exactly why humans of average station — ahem, most of us — gravitate toward fellow middling humans who achieve big things. In advertising, this shows up as consumers being more inclined “to choose the underdog brand with greater enthusiasm and determination,” according to one research study. (4) “The consumer shares the same experience as the brand story, which meets the need for self-expression,” the researchers concluded. “In general, as compared with the top-dog brand story, the underdog brand story often leads to much higher consumer brand identification.”

Owens’ Olympic story resonates across generations because people relate to it and because people are socially and religiously conditioned by underdog stories like that of David and Goliath. Owens left Berlin the ultimate victor, with hopes of capitalizing on his underdog achievements and advancing the status of African Americans back home. As a black man in 1930s America, things didn’t go quite as planned.

But in societies built on institutionalized racism, absolutely!

For Owens, his return to the States meant a return to the subjugation of pre-Civil Rights-era America. Whereas some members of the U.S. National Team declined to compete in Nazi Germany, Owens showed up, won big and became known internationally as the man who thwarted Hitler’s plans. But the promises of money and opportunity that were spelled out in telegrams to Owens turned out to be lies and the champion returned to did what he knew: working hard and making a way, even with no path apparent. (1)

Owens “tried to cash in on his fame with a chain of dry-cleaning stores,” Smith reported. “They failed.”

He tried his turn at team ownership in an all-black baseball league, but the venture folded. At the lowest point of trying to make a living for himself and his family post-Berlin, Owens competed in exhibitions against race horses and worked for a time as a gas station attendant. (1) For an African-American man who had experienced what very few humans have or will — both in terms of athletic achievement and overcoming the odds — needing to resort to these measures must have challenged his dignity and tested his sense of personhood.

By 1939, Owens was bankrupt and it would take until the 1950s for him to return to solvency, using his story and his success to become a “physical education guru,” goodwill ambassador, educational speaker and, eventually, a business executive and a corporate consultant.

The Medal of Freedom awarded to him by President Gerald Ford in 1976 suggests realization of the ultimate underdog concept: the American Dream, to many a failed ideal.

If it seems underdogs have some type of superpower, it’d be the magic that comes with having nothing to lose, everything to gain, and beholding an indifference to other people’s opinions.

All but counted out thanks to a 10-game losing streak to start the 2001 WNBA season, the Charlotte Sting finished with an above-.500 regular-season record, knocked off the Eastern Conference top dog Cleveland Rockers in the playoffs and advanced to the WNBA Finals.

With nothing to lose, everything to gain, and caring little about the sayers (nay, yay or otherwise), Dawn Staley, Tammy Sutton-Brown and company gave it their all against Lisa Leslie, Tamecka Dixon and the Sparks. Yet, the Sparks (Goliath) were too strong and the Sting (David), leaving Staley’s team on the wrong side of a 2-0 sweep. But the Sting didn’t need to win it all to be heralded for crafting a triumphant underdog story. They still overcame great obstacles and still accomplished great things. And with an inferior regular-season record and the eyes of women’s basketball clamoring for the 6-foot-5 Leslie and the top-dog Sparks to win their first WNBA championship, the Sting and their 5-foot-6 superstar in Staley were definitive underdogs through and through.

To overcome an 0-10 start to the season and make it to the Finals is an ultimate underdog achievement.

Besides having nothing to lose, everything to gain, and staying indifferent to the noise, what else might have helped the Sting — Owens, Taj McWilliams-Franklin, Emma Meesseman and underdogs everywhere — to succeed?

While the basketball world was focused on Leslie and the Sparks, Staley and the Sting quietly made adjustments and dug themselves out of the 0-10 hole. Being counted out and having attention focused elsewhere can be a position of power. Being in the background alleviates pressure and fosters creativity and freedom.

“Successful underdogs play by different rules.” (5) If David doesn’t match Goliath in strength, he identifies and hones skills he’s good at, sometimes reinventing the game. Courtney Williams could never match Brittney Griner in power and strength, but she can use her lithe frame as a weapon to outrun Griner in fast-break situations and to navigate around bodies in the paint.

Early in in the 2019-20 NCAA season, South Carolina starters Aliyah Boston and Mikiah Herbert Harrigan proclaimed that their biggest opponents are “no one” and “everyone.”

Las Vegas Aces star A’ja Wilson, who won the NCAA Women’s Tournament at South Carolina under Staley in 2017, elaborated on the concept:

They are their own obstacle. And I think that’s something that Coach Staley has always instilled in us. We’re always in control of our own destiny. … So as long as you’re in control of what you’re doing, then, it’s like, you should be good, there should be no obstacles. … [I]t’s how you play. So that’s how it’s ‘no one’ and ‘everyone.’

By taking that to heart (intrinsic motivation), the Gamecocks, with the No. 1 recruiting class and, therefore, a lot of freshmen, rose to No. 1 in the nation. They used their youth and fresh legs (originality) to their advantage, outworking opponents. And while the rest of sports media was focused on Sabrina Ionescu and the Oregon Ducks (anonymity), the Gamecocks focused on winning until their victory over Top-25 teams totaled 13 and their total equaled one.