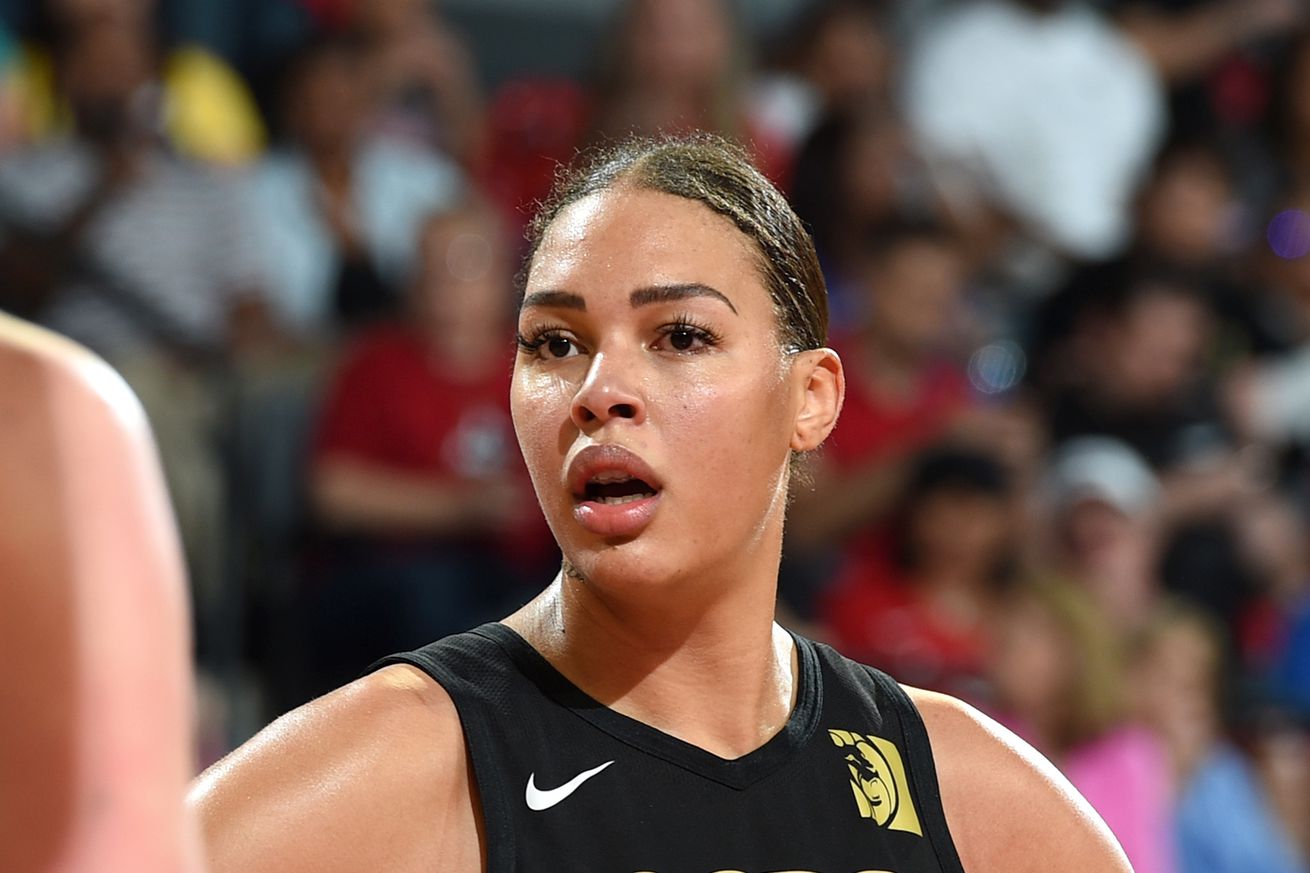 Liz Cambage, who has spent much of her basketball career overseas, will not be able to play her fifth WNBA season in 2020. | Photo by David Becker/NBAE via Getty Images

Las Vegas Aces head coach Bill Laimbeer has told ESPN that superstar Liz Cambage has been granted a medical exemption for the 2020 season and will receive her full salary.

Cambage’s agent, Allison Galer, already revealed on July 4 that it was unlikely Cambage would play this season. The 6-foot-8 center from Australia had what she thinks was the coronavirus while playing overseas in China in December 2019, which was before the global pandemic began. That illness, which severely affected Cambage before she recovered, is the reason she has been granted the exemption.

Cambage, who averaged 23.6 points and 11.4 rebounds during the playoffs last year, joins Tina Charles of the Washington Mystics and Jonquel Jones of the Connecticut Sun as three of the best post players in the league who will not suit up in 2020 season.

Elena Delle Donne of the Mystics, whose request for medial exemption was denied, has yet to make an official announcement about her season status. When she last spoke to the media, she had not traveled to the Bradenton, Florida, bubble where the 2020 WNBA season will be played at IMG Academy.

Cambage was set to be part of a loaded starting lineup for the Aces alongside former No. 1 overall draft picks A’ja Wilson (2018), Angel McCoughtry (2009) and Jackie Young (2019), as well as sharpshooter Kayla McBride. Another No. 1 overall pick, Kelsey Plum (2017), would have been in the starter mix as well before tearing her Achilles in June. She has been ruled out for the season.

Seattle Storm head coach Dan Hughes will not be joining his team in the Bradenton, Florida, bubble during the 2020 WNBA season. The Storm announced on June 29 that he would be at high risk of serious illness if he were to contract the coronavirus.

Hughes missed part of the 2019 season while recovering from cancer, a preexisting condition that increases the likelihood of serious illness or death from COVID-19.

With regards to this news, Hughes offered the following statement:

I am saddened that I won’t be able to travel with the team as everyone knows how much love I have for this organization. I am thankful to be in good health and looking forward to supporting Coach Klopp and the staff and players in any way I can this season.

Gary Kloppenburg, a current Storm assistant coach who served as head coach of the Tulsa Shock in 2012 and 2013, will take over head coaching duties. Former Storm player Noelle Quinn has been promoted to associate head coach.

Other players who will miss the 2020 season

The Washington Mystics acquiring Tina Charles on April 15 was one of the most significant moves in the WNBA in free agency, but Charles announced last Friday that she will not play in 2020 due to extrinsic asthma, a preexisting condition that makes her more vulnerable to the coronavirus.

Charles, unlike her teammate and fellow superstar Elena Delle Donne, has been granted a medical exemption by the league’s appointed panel of doctors and will receive her full salary for the 2020 season.

While we are disappointed that Tina will not be with us this summer, we fully understand the reason for her medical exemption and look forward to having her with us next season. … Again, the health of our players takes precedence. There hasn’t been anything normal about playing this season, but we are prepared and excited to play with the group that is here in Florida. We are looking forward to starting our first game with Indiana on the 25th!

Charles is averaging nearly a double-double for her career with 18.1 points and 9.5 rebounds per game. She is fifth all-time in the WNBA with 3,133 rebounds and tenth with 5,982 points.

The New York Liberty announced on July 7 that second-year player Asia Durr will be sitting out the 2020 WNBA season.

Durr, who tested positive for COVID-19 in June, described on Twitter being a “High Risk player” and her “complicated and arduous” struggle to return to full health.

After a spectacular career at Louisville, Durr was the No. 2 overall pick in the 2019 draft. As a rookie with the Liberty, she averaged 9.7 points in 26.7 minutes per game. She only played in 18 games due to a hip injury but was third on the Liberty in average playing time and was expected to be a key contributor again this year on a very young team with seven rookies.

On June 25, the Liberty announced that Rebecca Allen will be sitting out for the 2020 WNBA season. In a statement, the six-year player said of her decision:

This has absolutely been one of the toughest decisions, but after much thought and discussions, I have decided to opt out of the 2020 season in Florida. … The uncertainty of the COVID-19 crisis and the logistical health risks related to travel have led me to conclude that it’s best if I not play in the WNBA this year.

Jantel Lavender of the Chicago Sky is coming off a successful surgery to repair a fifth metatarsal fracture in her left foot. Although the surgery was successful, the Sky announced on June 30 that Lavender has decided to take the 2020 season off as a precaution during the current coronavirus pandemic.

After the deadline for players to opt out was extended, the Los Angeles Sparks announced on June 26 that forward/center Chiney Ogwumike and guard Kristi Toliver will be sitting out for the 2020 WNBA season.

Ogwumike and Toliver both cited health as their reason for not playing during these times. Ogwumike has had previous injuries that affected her decision:

If you know me, you know that I have overcome some of the biggest challenges an athlete can face on the court. … My previous injuries have given me strength and built character, but unfortunately they require me to be careful with my preparation leading up to a season. This year is unprecedented in many ways, therefore my team and I have come to the decision to be proactively cautious and put my body first.

Though I want very much to compete with my team, to be a leader and show up for them, I am not comfortable with the risk to my physical health – short-term and long-term – given the many unknowns of COVID-19 and the risk of injury. … For me, the right decision under the circumstances is to opt out for the year.

Both players mentioned playing a role in helping their communities while away from basketball with Toliver specifically mentioning “social justice issues.”

Ogwumike was the No. 1 overall pick in 2014 and is among the top players on the Sparks. Toliver has won two WNBA championships and is a dangerous 3-point weapon.

On June 23, Tiffany Hayes of the Atlanta Dream became the third star player to opt out of the 2020 WNBA season. Hayes said in a statement, “I believe there are much more important things (than basketball) to be thinking about in this moment” — leaving it open-ended as to whether she is sitting out due to racial injustice, the coronavirus or both.

Hayes, a 30-year-old guard who has played her entire career in Atlanta, possesses a career scoring average of 13.6 points per game. With her decision, Hayes joins Dream teammate Renee Montgomery, who announced last week that she will be skip the 2020 season to work on social justice reform.

The worst team in the league in 2019 with an 8-26 record, Atlanta has now lost two key pieces, leaving a lot of pressure on new additions Courtney Williams and Chennedy Carter, the latter of whom was the No. 4 overall pick in the 2020 WNBA Draft.

On June 22, the Connecticut Sun announced that Jones, will not be playing in the 2020 WNBA season. In 2019, she averaged 14.6 points and 9.7 rebounds per game, was a legitimate MVP candidate and led the Sun through a five-game WNBA Finals series with the eventual champion Washington Mystics.

Jones said regarding her decision:

After careful thought and consideration I’ve decided to forego the upcoming WNBA season and use this time to focus on personal, social, and familial growth. … This was one of the toughest decisions I’ve made but the resurgence and unknown aspects of COVID-19 have raised serious health concerns that I do not feel comfortable competing in. I’d like to thank the Connecticut Sun organization, my teammates and fans for their unwavering support and understanding. While I won’t be competing this year I’m looking forward to lacing up with my teammates in 2021 and continuing the pursuit for a WNBA championship. Wishing the entire league and everyone involved a healthy and enjoyable season. Go Sun!

Later in the day on June 22, the Mystics announced Natasha Cloud, another key player from the 2019 WNBA Finals win, will sit the 2020 season along with teammate LaToya Sanders. Cloud is opting out of the season to further her social justice work while Sanders, who battles anemia, cited “health and family” as her reasons for not playing.

Cloud, who averaged nine points and 5.6 assists last year, has been one of the most vocal WNBA leaders of social justice reform movements. In a statement, she said:

This has been one of the toughest decisions of my career but I will be foregoing the 2020 WNBA season. … There are a lot of factors that led to this decision, but the biggest one is that I am more than an athlete. I have a responsibility to myself, to my community and to my future children to fight for something that is much bigger than myself and the game of basketball. I will instead continue the fight for social reform, because until Black lives matter, all lives can’t matter.

The WNBA season is tentatively scheduled to tip off in late July from IMG Academy in Florida, where reported coronavirus cases are spreading rapidly.