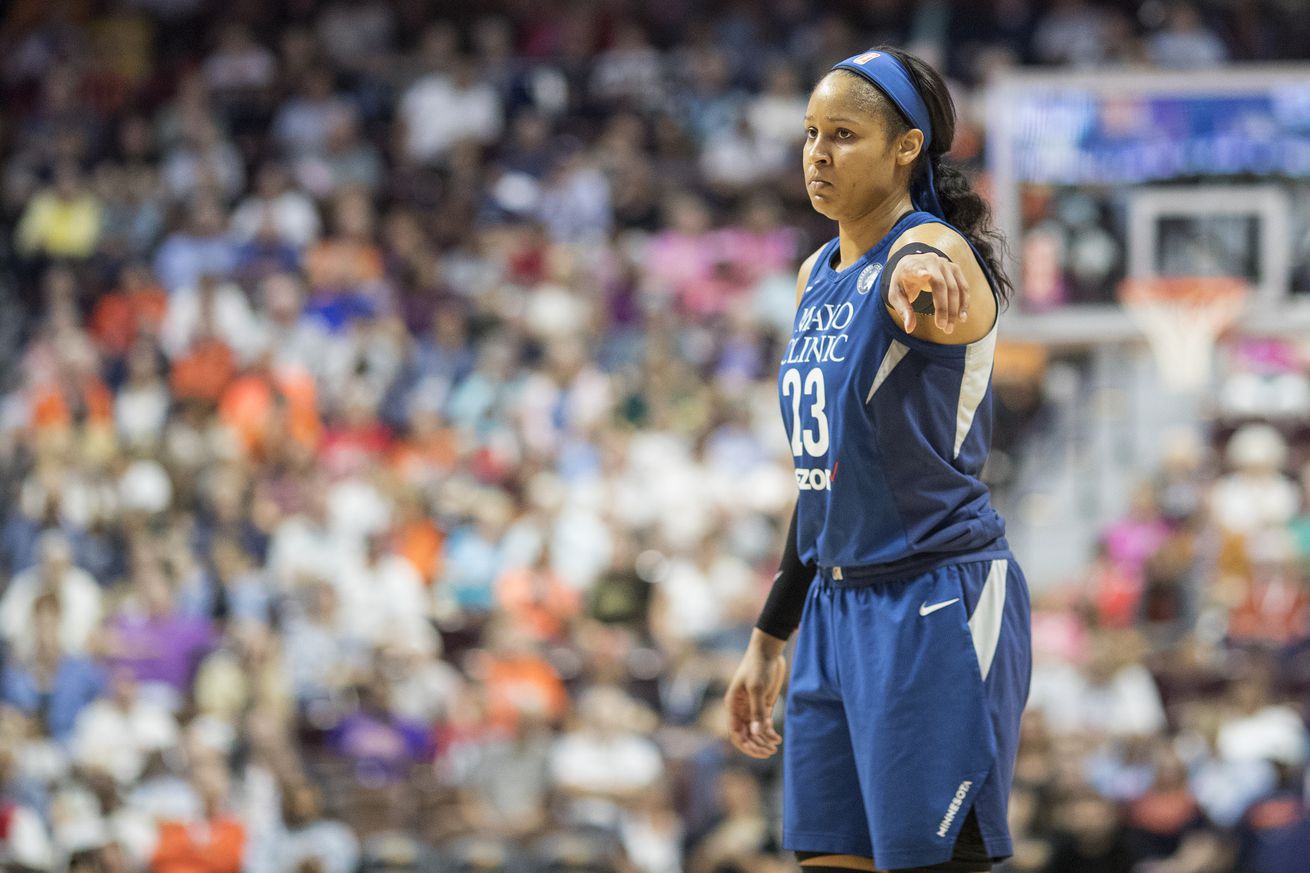 Maya Moore has shifted her intense attention from the game of basketball to matters of criminal justice. | Photo by Tim Clayton/Corbis via Getty Images

Maya Moore was announced as a finalist for the Muhammad Ali Sports Humanitarian Award, the winner of which will be announced at the ESPYs on June 21. Because of her commitment to criminal justice reform and the sacrifices she has made in support of it, Moore should add the Ali Award to an already full trophy case.

I have come to the “understanding that basketball is a platform for something bigger than the game, helping people, touching people’s lives,” Maya Moore said in an interview with the New York Times, in late 2009, at the start of her junior season at the University of Connecticut.

These words plucked from the archives suggest the multi-time champion and award-winner has been thinking about things that are bigger than basketball for more than a decade.

It is, therefore, unsurprising that Moore is a finalist for the 2020 Muhammad Ali Sports Humanitarian Award.

If Moore’s name is called during the ESPYs on June 21, she would become the second WNBA player to win the award — Tamika Catchings was honored in 2015.

Moore is nominated because of her advocacy for Jonathan Irons, sentenced to 50 years in prison in 1998 after being wrongly convicted of burglary and assault in Moore’s home state of Missouri. In March, Irons’ conviction was overturned, though Missouri’s attorney general has since appealed the judge’s decision.

So, Moore’s work is not done. She already had decided to extend her leave of absence from the WNBA, sitting out the 2020 season (if it happens) after skipping 2019.

The other finalists are Kevin Love of the Cleveland Cavaliers, Nelson Cruz of the Minnesota Twins, Devin and Jason McCourty of the New England Patriots and the WWE’s Titus O’Neil.

While all deserve appreciation for their efforts, Moore most embodies the ethic of Ali. By foregoing two years of her professional career while still in her basketball prime, Moore has sacrificed the most for her cause, making her the worthiest winner.

“No Longer An Athlete”

is given to an athlete whose continuous, demonstrated leadership has created a measured positive impact on their community through sports. The candidate must embrace the core principals that Muhammad Ali embodied so well, including confidence, conviction, dedication, giving and respect.

The stated qualifications for the Ali Award emphasize making an impact “through sports.” Yet, Ali’s impact went above and beyond sports.

In 1966, the then-25-year-old world heavyweight champion refused induction into the U.S. Army due to his opposition to the Vietnam War. Ali subsequently was stripped of his title and exiled from the sport — he would not return to the ring until October 1970. In the interim, he made his impact, traveling the nation to speak at college campuses about the injustice of the Vietnam War and the need for racial justice.

In recent years, “More Than An Athlete” has emerged as the dominant athlete ethos. Sanctioned and certified by LeBron James and his UNINTERRUPTED cohort, “More Than An Athlete” expresses an athlete’s ability to make an impact outside the spots arena — as an activist, an entrepreneur, an entertainer and an all-round cultural influencer. For James and others, though, their “athlete” identity remains primary, and the gateway to their amalgam of other activities.

Ali, in contrast, subsumed his athlete identity. Rather than betray his values, he sacrificed his lucrative boxing career for the cause he believed in. Ali, at least temporarily, was “No Longer An Athlete.”

Moore, likewise, has left her athlete identity behind, at least temporarily.

Unlike Ali, she was not forced to make this choice, she willingly paused her playing career to fully immerse herself in her faith and a cause in which she deeply believes.

This fact does not mean Moore is a better, realer or truer activist. Rather, it highlights her evolution, encouraging an appreciation of her commitment, which most closely resembles Ali’s.

When she formally embarked upon her criminal justice efforts, Moore leveraged her athlete identity, particularly her identity as a “winner” who had captured a total of six collegiate and professional championships.

Not long after the conclusion of the 2017 WNBA season, when Moore led the Lynx to their fourth title, she partnered with Kansas district attorney Mark Dupree and Miriam Krinsky, a federal prosecutor turned nonprofit executive, to establish “Win With Justice.”

The language of winning allowed Moore to effectively communicate the organization’s mission.

For too long, a ‘win’ for a prosecutor has been a tally of convictions and trial results often resembling a sports scoreboard. We often track success in our justice system with a simple count, choosing to minimize the complexities of every personal story. We have not adequately valued how our justice system treats those who come into contact with it. Yet if we continue to quantify and value ‘win-loss’ metrics, without considering other indicators of the legitimacy and fairness of our system of justice, we will erode the trust our community must have in those charged with promoting public safety.

The project was a culmination of her longer-term interest in issues of criminal justice. At 18, Moore met Irons through a prison ministry program, sparking her increasingly intense engagement with the injustices of the American system of mass incarceration.

To get beyond “wins” and “losses” in the courtroom, it helped that Moore decided go beyond wins and losses on the court. While her “shift” away from professional basketball was motivated by her faith, no longer having to obsessively perfect her jump shot (which already was pretty perfect) permitted her to work more intently on seeking justice and establishing more just communities, beginning with Irons and Jefferson City.

I really just wanted to shift my priorities to family and ministry. I tried to keep my time [away] from the game pretty private, but Jonathan’s cause is something I’m very passionate about. It was something I’d been doing for years and I knew once I walked away from basketball, I would be able to invest more deeply in.

When contributing to a discussion panel about criminal justice reform and sports sponsored by The Undefeated and The Marshall Project, Moore further articulated how exiting basketball allowed her to engage fully with Irons’ situation:

It’s extremely hard to be engaged in these issues and be at the top of your craft. I couldn’t imagine what this year would look like for me if I was fully invested in my team and trying to bring Jonathan home and raise awareness for some of these causes.

Maya does more and more

It may seem curious that Moore has devoted herself so singularly, so deeply to the case of Jonathan Irons. There is an instinct to ask why she did not consider a project that is more expansive. Why focus only on Irons?

First, Irons’ situation has not been Moore’s sole focus — she has been spreading her wings across a variety of activist and empowerment initiatives. Yet, even if it had been, her approach to Irons’ case has been instructive.

Moore consistently has communicated that he is representative — illustrative of the unjust imprisonment of mostly brown and black men that has become intrinsic to American society.

During the discussion with The Undefeated and The Marshall Project, Moore emphasized, “Part of what I want to do when I tell people about Jonathan’s story is not just look at this story but look at the stories in your community.”

“This is a real-life story,” she added. “There are more Jonathans out there.”

For many Americans, Muhammad Ali defined resistance to the Vietnam War, serving as a symbolic lode star for those who opposed the United States’ morally-corrupt conflagration against communism in Southeast Asia. Possibly, Moore can approach such a status, emerging as the figure who encourages communities, states and, eventually, the nation to undergo an enduring rethinking of what a “win” means in America’s criminal justice system.

In the least, she should claim an award inscribed with Ali’s name.