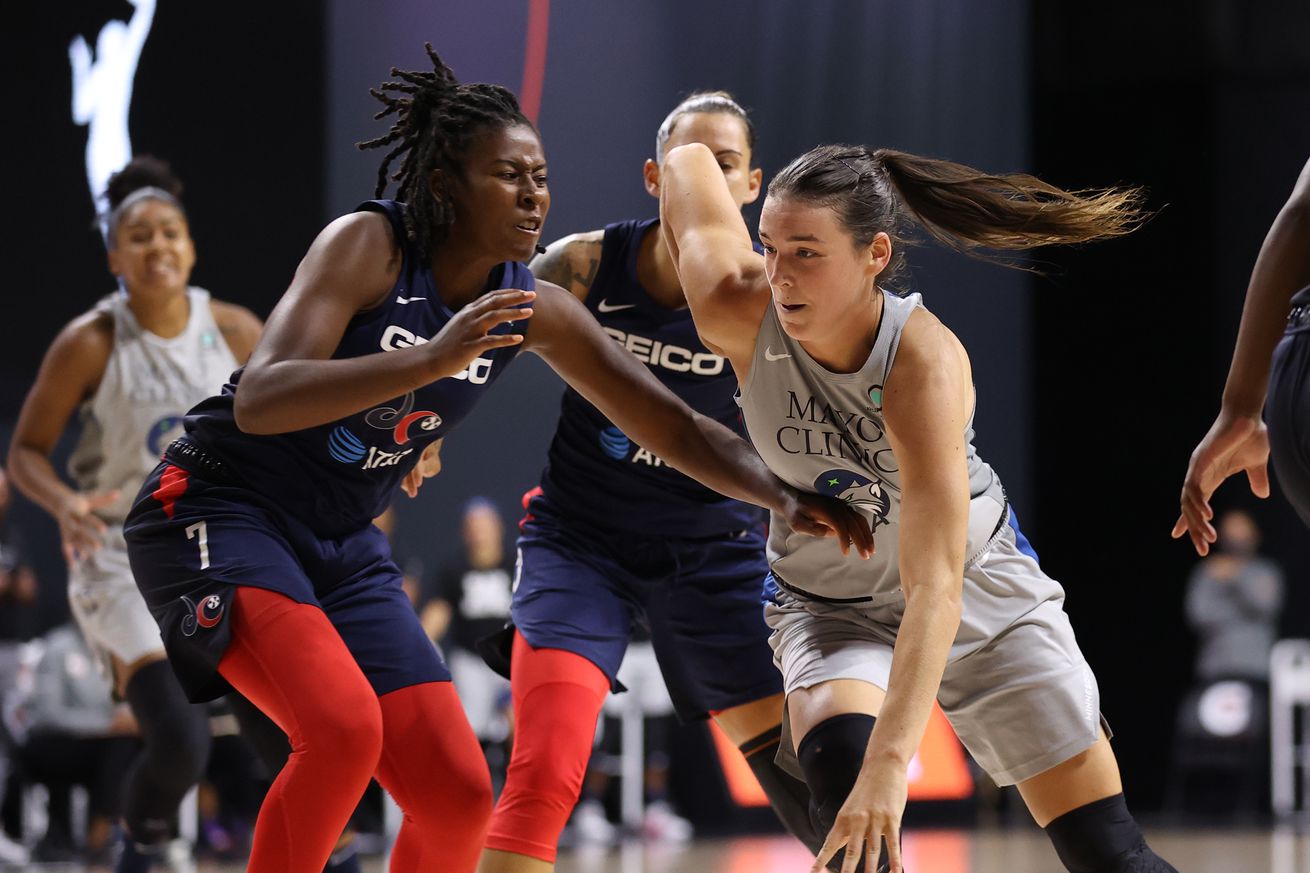 Bridget Carleton (with ball) is roughly the same height as Maya Moore, started at small forward for the Lynx in 2020 and has the skills to become an impact player. | Photo by Stephen Gosling/NBAE via Getty Images

If Maya Moore returns to the WNBA, watch out for the Lynx. If she doesn’t, Minnesota can still compete for a championship if it can develop or sign another do-it-all offensive player. A young player already on the roster who could be part of the solution: Bridget Carleton.

After a thrilling and unprecedented bubble season in 2020, Swish Appeal has decided to examine what each WNBA team needs the most heading into what will hopefully be a more normal 2021 season. Here’s a look at what the Minnesota Lynx need to do this offseason:

The Lynx have toughness, a great culture and the Coach of the Year in Cheryl Reeve, and those things brought them to the semifinals of the 2020 WNBA Playoffs. Yet, they were swept by a Seattle Storm team that had too many offensive weapons for the rebuilding Lynx to handle. This offseason, it will be interesting to see what the Lynx do to put more points on the board — a necessity for competing with teams like the Storm, who can pile on a scoring blitz.

In 2020, Lynx forward Napheesa Collier, an All-WNBA Second Team selection, worked in the post, knocked down shots from outside and averaged 3.3 assists per game. And Damiris Dantas, a 6-foot-3 do-it-all forward, had a breakout year and demonstrated potential for a high ceiling. Still, the Lynx could use one more versatile scorer to complete a starting lineup featuring a true point guard in Crystal Dangerfield, a true center in Sylvia Fowles and the inside-out games of Collier and Dantas.

Of course, Minnesota wouldn’t mind if Maya Moore walked through the doors of the Target Center. She won four championships for the Lynx before taking the past two years off to focus on criminal justice reform. If she returns in 2021 and Fowles recovers well from the calf injury that nagged her for most of the 2020 season, Minnesota will be set to contend for a title.

And if the 2020 season is any indication, the Lynx will be knocking on the door to the WNBA Finals, with or without those players. So, finding a player in the mold of Maya Moore — it doesn’t have to be her or even someone as talented — could put them over the top.

Bridget Carleton made a huge leap in her second WNBA season and started 15 games for the Lynx. The 6-foot-1 guard/forward broke out for 25 points in a single game against the New York Liberty on Aug. 5. Although she lacks the same explosiveness as Moore, Carleton uses her size to her advantage and is a complete offensive player.

Carleton played nearly the same number of minutes as Dantas this year but scored half the points. If she can raise her play to the level of Dantas’, Carleton would go a long way toward filling the the Lynx’s biggest need.

Highlights: Bridget Carleton showed off her talent this summer

Lexie Brown, meanwhile, was expected to improve upon her 2019 season during which she was Minnesota’s top bench player. A concussion sustained during the 2020 season held her back, but Brown remains a driving and shooting point guard/shooting guard who is just entering her prime.

Options from the outside

Some options among the league’s unrestricted free agents include Chelsea Gray, Natasha Howard and Aerial Powers.

Gray would help in the distributing department, though Minnesota is doing fine with playmaking and ball movement thanks to Dangerfield, the reigning Rookie of the Year. Howard, who won a championship with the Lynx in 2017 and was named the WNBA’s Most Improved Player with the Storm in 2018, would make a good defense even better. And Powers would power her driving and 3-point shooting abilities with energy.

All three players are on contending teams, so they may not want to leave their respective situations. But being on a contending squad often means limited opportunity.

It’s not clear, for example, how much playing time Powers will get on a Washington Mystics team that now has two more stars than it had in 2019: the newly-acquired Tina Charles and a much-improved Myisha Hines-Allen. Gray is the most likely to remain a go-to player on her Los Angeles Sparks, but Howard is in a similar situation to Powers — she saw her playing time for the 2020 champion Storm go down by 10.4 minutes per game when Breanna Stewart and Sue Bird returned after missing all of the 2019 season. Powers will be the least sought of the trio, but Minnesota can more than afford any of them with its $452,154 in cap space.