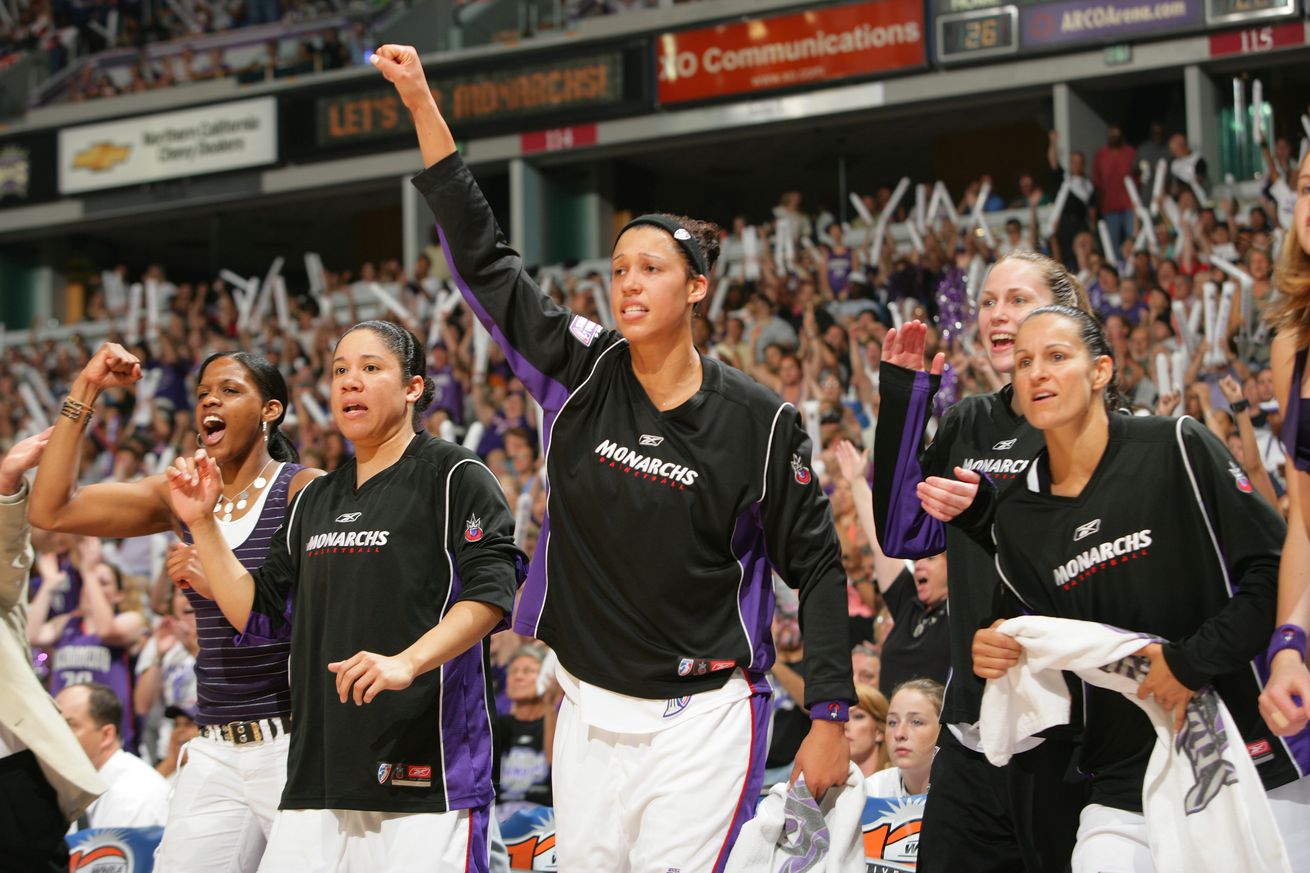 Kara Lawson (left), Nicole Powell (center) and Ticha Penicheiro (right) were part of a Monarchs core that won the WNBA Finals in 2005 and nearly went back-to-back in 2006. | Photo by Rocky Widner/NBAE via Getty Images

The 2006 Sacramento Monarchs, led by Kara Lawson, Nicole Powell, Ticha Penicheiro and Yolanda Griffith, failed to win back-to-back titles but put up a valiant effort in the Finals against Deanna Nolan and the Detroit Shock.

Outside of playing “Backyard Basketball” as Lisa Leslie, my first memory of women’s basketball came when I was 15 years old and watching the Detroit Shock defeat the Sacramento Monarchs in the 2006 WNBA Finals.

As a kid who was born in Sacramento and had family ties to the area (my half-brother and half-sister grew up in nearby Davis), I latched onto the Monarchs as they put up a great fight before losing in a decisive Game 5 in the 2006 WNBA Finals.

Behind top scorer Yolanda Griffith, a 2014 inductee into the Women’s Basketball Hall of Fame, the Monarchs outscored the Shock by nine points over the course of the series but still lost the championship.

It was tough to see my Monarchs get only one championship when their talent seemed good enough to create a dynasty.

Sacramento won Game 1 by a score of 95-71, helped along by a 25-year-old Kara Lawson who scored 22 points and completed six of her eight shot attempts from beyond the arc. After losing Game 2, the Monarchs soared for a commanding 89-69 result in Game 3.

The 2006 Finals also presented me with the chance to watch Hall of Fame point guard Ticha Penicheiro for the first time, who played 12 seasons in Sacramento.

In the end, Detroit’s Deanna Nolan was too much for the Monarchs. She led the Shock from down 2-1 in the series with wins in Games 4 and 5, playing all 40 minutes of Game 5 and scoring a game-high 24 points to be crowned Finals MVP. Nolan put the Shock on her back with her versatile offensive skill set, and Katie Smith’s 3-point talents also were on display for Detroit; she shot 11-of-26 from distance (42.3 percent) for the series.

The way Kara Lawson stepped up for the team in Game 1 and the heart that all the Monarchs played with throughout the series earned my admiration. As a brand new Monarch’s fan, although I was disappointed in the result, I developed respect for the Detroit stars — Nolan and Smith, as well as Cheryl Ford and Swin Cash.

Looking back, that respect for the Shock is still there even though it was tough to see my Monarchs get only one championship when their talent seemed good enough to create a dynasty.

All these memories were made while I was a high school student living in the Boston area, but the city of Sacramento still meant a lot to me. Watching the 2006 Finals with my parents is a memory I will never forget. Both my mom and dad lived in Sacramento longer than I did and they were rooting for the Monarchs just as hard. I think they also appreciated how I took a thing we bonded over as a family and turned it into a passion we could share together.

As chance would have it, Lawson is now an assistant coach for the Boston Celtics of the NBA. With the Monarchs folding in 2009, I’m now hoping a WNBA expansion team will come to Massachusetts.

I found myself captivated by the 2007 NCAA Tournament championship game between the Rutgers Scarlet Knights, my mom’s alma mater, and the Tennessee Lady Volunteers. I was disappointed that the Scarlet Knights didn’t win, but seeing Candace Parker dominate the game and lead Tennessee to its seventh national title was special. Parker’s all-around skill set has made her one of the best players in the WNBA and it was cool to get a sneak preview of that.

Then, in the summer of 2007, I took my first college tour at the University of Maryland. Thanks to a Kristi Toliver 3-pointer with five seconds left in regulation in the 2006 national game, there was a trophy in the Comcast (now Xfinity) Center in College Park that grabbed my attention. I ended up going to Maryland, attracted by the sports writing program and the chance to cover the men’s and women’s basketball programs, both of which were former national champions.

I started writing for Swish Appeal in 2012, thanks to Nate Parham, now with Golden State of Mind, who gave me the chance to cover the Terps for one full season while in college. Looking back, I’m glad that my life intersected with the Sacramento Monarchs and their legendary players. It made the women’s game a huge part of my life and I’ve made a lot of friends in the process of loving and covering women’s basketball.

In 2013, I covered the Mystics with Albert Lee, now with Bullets Forever, and got to celebrate the team’s long-awaited championship with him last fall.