My First Basketball Love: Why the 2018 WNBA season rocked my world 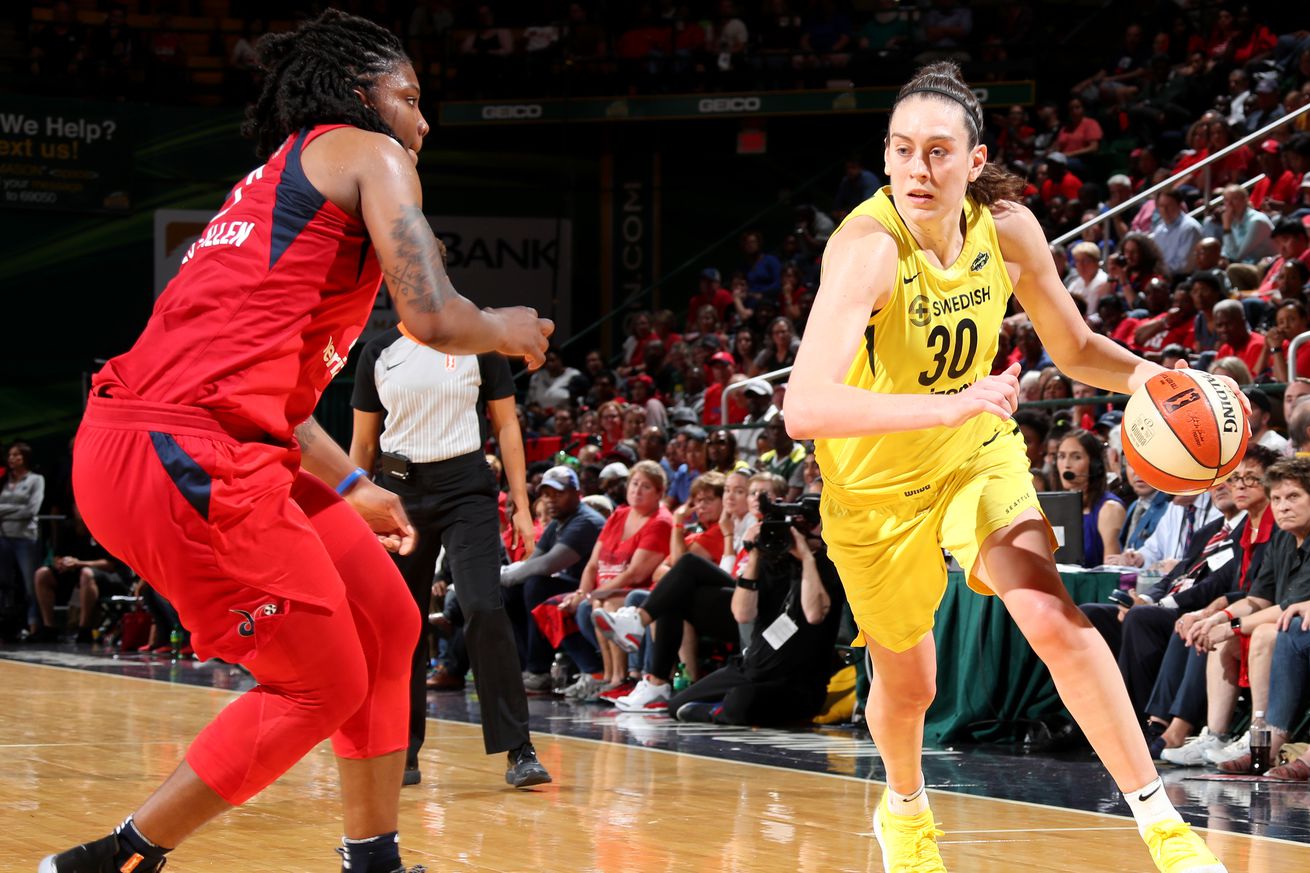 Breanna Stewart, the 2018 WNBA MVP and Finals MVP, helped make my first season a memorable one. | Photo by Stephen Gosling/NBAE via Getty Images

From the Seattle Storm taking the championship to attending my first-ever WNBA game, the 2018 season will always be special to me.

As merely a “sports watcher,” women’s basketball is not handed to you. If you want to watch, you have to seek it out, continuously. Only rarely do you get the highlight from a historic moment or Final Four, and the WNBA is possibly the most elusive professional sports league in the country.

If you do not know where to look, you will likely miss it.

The first WNBA game I can remember is from the early 2000s and it featured the Seattle Storm. I remember this only because Sue Bird and Lauren Jackson were in the game. What the score was or who else was playing, I could not tell you. Beyond that, I was generally aware of players like Diana Taurasi, Britney Griner and Breanna Stewart — all the big names from college that disappeared suddenly once they left school.

Winding road returned me to the WNBA

My journey to back to the WNBA was an involved path.

In March 2018, I left U.S. Naval service and began work as a government contractor, moving from Georgia to Colorado for a job. I worked eight-hour days and could set my own schedule. So, I worked from early morning to early afternoon, and then I enrolled in school, working towards a degree in journalism.

It was through my interactions on Twitter with The Ringer’s Shea Serrano and eventually SB Nation’s Natalie Weiner, then with Bleacher Report, that I discovered WNBA League Pass was less than 20 bucks for the season — an offer too good to pass up. It was never that I mindfully stayed away from the league; I simply did not know there was access to it. With League Pass, however, I started watching every game I could, not caring which teams were playing. I just wanted to learn the players and get a feel for the league.

How the league is covered — or isn’t covered — is something of a story unto itself.

Almost immediately, I wanted to find a community of people with whom to discuss the games. Initially, this occurred on Twitter, finding various blogs and websites. By late June, I had found Swish Appeal, and I wanted to write and share my thoughts, which I started doing in the FanPosts section. I would come up with topics that interested me and, luckily, Tamryn Spruill, your Swish Appeal managing editor, liked what I had to say and how I said it.

She featured my All-Star picks article and eventually offered me a permanent spot here. For that, I will always be grateful.

WNBA 2018 was the best pro sports season on record

The season itself was so much fun, and it started with striking moment: Chelsea Gray of the Los Angeles Sparks calling game against the Minnesota Lynx.

Chelsea Gray knows a thing or two about buzzer-beaters to beat the Minnesota Lynx. pic.twitter.com/WX3uOJ3GgV

After watching quite a bit, I had settled on Seattle as my rooting interest because of my familiarity with Stewart’s college domination, and that Storm game I had watched as a teenager way back when. Whether it was their comeback early in the year against Chicago Sky, their blowout win over the Sparks or their eventual championship win, Seattle put together a fun show of a season that I will never forget.

‘The league and these women deserve more than that.’

ESPN’s handling of the WNBA All-Star pick announcement stood out, and not for positive reasons. I was talking with Tamryn about my excitement in the lead-up to the event and then it happened in … a blur. Thoroughly disappointed with ESPN’s presentation, I went right to Twitter to declare that the league and the women who make it up deserve better.

I also brought it up again at the end of our roundtable about the All-Star picks.

From media erasure to media mishandling, I was seeing up close why access to games had once seemed like an inside secret.

Am I allowed to be mad at the way @ESPN just announced the @WNBA All Stars? That was garbage. I hate to take away from such an amazing group of women, but that was terrible. The league and these women deserve more than that.

The 2018 season also marked my first, and so far only, game that I got to attend.

My wife and I were in Atlanta for another event and it just so happened that the Sparks and the Atlanta Dream were going to be playing one of the nights we were there. The Dream were really good that year and the crowd was a lot of fun. It was a fantastic game. I have been to a lot of sporting events and WNBA games definitely have a community feel to them that seems lacking in other sports.

Although my first season watching and covering the WNBA was filled with joy, something I learned right away was how much the coverage of the league is built upon small, hardworking outlets that really have to do the work that much larger outlets are unwilling to do. How the league is covered — or isn’t covered — is something of a story unto itself.

Another thing I learned is how much the fans, across the whole league, are a community, regardless of their favorite team. The WNBA community is welcoming and so great. I always look forward to getting to share my thoughts on the happenings in the league and sharing these amazing basketball players with the fans.

As the league grows, I look forward to sharing more great moments with the WNBA community.