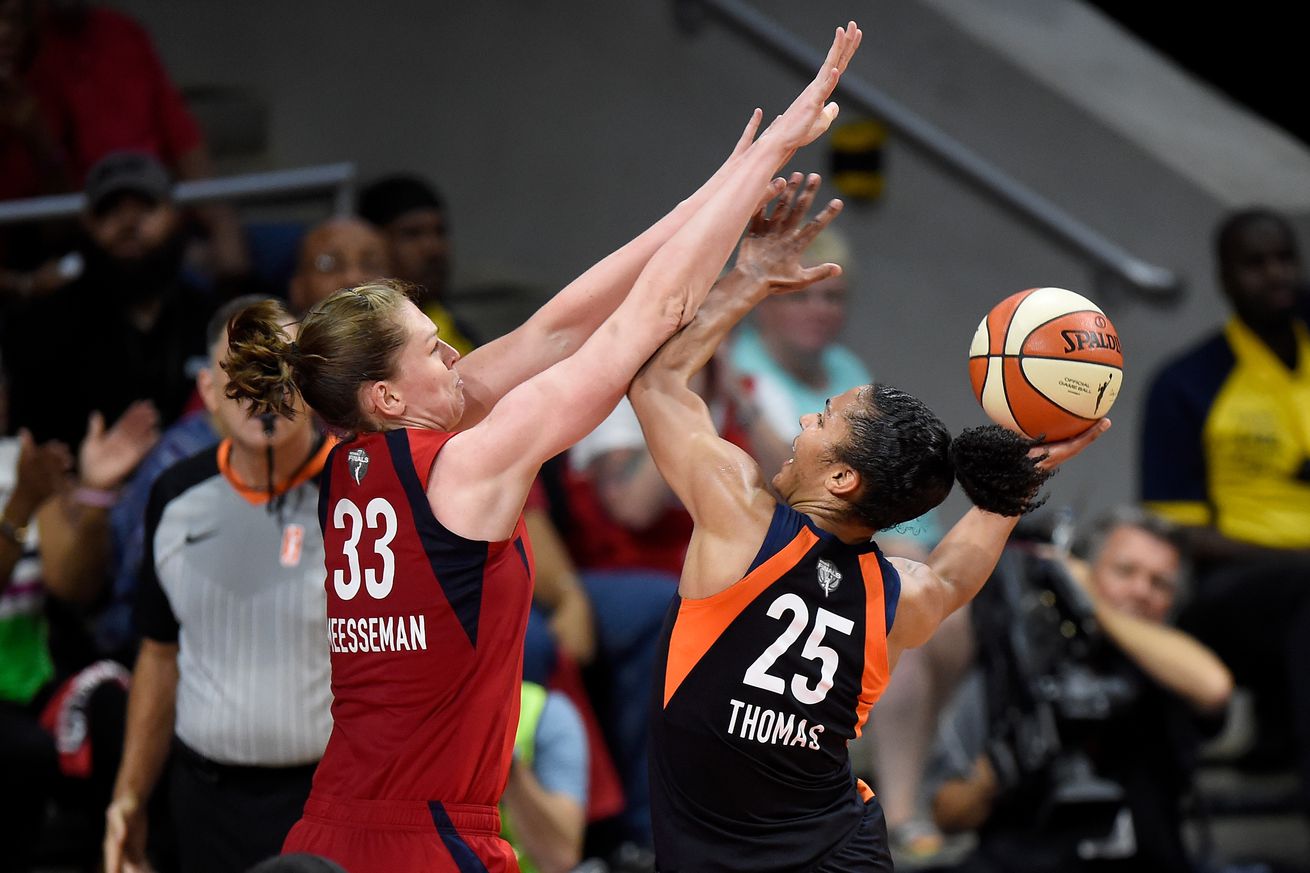 The defending champion Washington Mystics meet the Connecticut Sun for the first time since facing them in the 2019 WNBA Finals, while the Los Angeles Sparks take on the Chicago Sky — both on NBA TV as part of a doubleheader to kick off the season. A third game tonight, between the Minnesota Lynx and Seattle Storm, will also be on national TV (CBS Sports Network).

Tuesday, at 7 p.m. ET, the Washington Mystics will take on the Connecticut Sun in a rematch of last year’s WNBA Finals, a series the Mystics won in five games after point guard Natasha Cloud publicly guaranteed a Game 5 win.

Cloud, who is sitting out this season to fight for social justice, won’t be the only familiar face from the 2019 Finals missing tonight. Elena Delle Donne and LaToya Sanders of Washington and Jonquel Jones, Courtney Williams and Shekinna Stricklen of Connecticut are five other starters from the series who will not be involved either. Delle Donne, Sanders and Jones are sitting out due to concerns about the COVID-19 pandemic, while Williams and Stricklen are both members of the Atlanta Dream this season. Former Mystics point guard Kristi Toliver is no longer with the team, either, re-joining the Sparks in the offseason.

The Mystics will also be missing superstar acquisition Tina Charles, who has been medically excused from the season. Without Charles and Delle Donne, the Mystics, like the Sun without Jones, have lower expectations this season. But Washington came out and dominated the Indiana Fever in the season opener to start 1-0.

Connecticut blew a lead in an opening game loss to the Minnesota Lynx. But if DeWanna Bonner (game-time decision) is good to go despite a knee injury, the Sun are not as depleted as Washington is. Can the Mystics snag a 2-0 start if stars Alyssa Thomas and Bonner, who combined for 39 points against the Lynx, are running the show for Connecticut?

Myisha Hines-Allen hopes so after she posted a double-double iwith 27 points and 10 rebounds in a breakout performance against the Fever. Aerial Powers and 2019 Finals MVP Emma Meesseman, who had 16 and 14 points, respectively, will try to help Washington’s cause as well.

Both teams started the season 1-0, with the Sky exacting revenge over the Las Vegas Aces, who eliminated them from the playoffs last year, and the Sparks dominating the new-look Mercury. Predictions on how the Sky would finish this season varied so it will be interesting to see them go up against a front-runner like LA.

The Lynx came from behind to beat the Sun with some clutch play from rookie Crystal Dangerfield. Now Minnesota will try its hand against a Storm team whose MVP candidate Breanna Stewart had a solid opening game with 18 points, eight rebounds and four steals.

How to watch: NBA TV, NESN+ or NBC Sports Washington

Key to the matchup: Myisha Hines-Allen vs. Alyssa Thomas. Can Hines-Allen be as successful as she was in the Mystics’ opener going against one of the best defenders in the league in fellow point-forward Alyssa Thomas? And, on the flip side, can she slow Thomas who is the best transition point-forward in the league? Thomas has an established star in DeWanna Bonner to get the ball to, while Hines-Allen has the same in Emma Meesseman. How well will they distribute and can Hines-Allen make the most of her shooting ability? It’s the one advantage she has over Thomas.

Film breakdown: The homework that prepared Hines-Allen for the WNBA

How to watch: NBA TV, The U Too or Spectrum SportsNet

Key to the matchup: Chicago’s defense. The Sparks are coming off a game where they did everything right offensively. They scored 99 points, shot 55.9 percent from the field, 45 percent from beyond the arc and 82.4 percent from the charity stripe. The Sky know they can score too — they were second in the WNBA in points last year with pretty much the same core (minus Jantel Lavender). But they will need to lock in on defense to stop LA’s plethora of scoring options.

Feature: Sky hope to build on this chemistry from last year

How to watch: CBS Sports Network, JOEtv or FOX Sports North PLUS

Key to the matchup: Napheesa Collier. She was cold to start the Lynx’s opener against Connecticut, but stepped up later in the game. If she had played consistently the whole way through, Minnesota wouldn’t have needed a late-game comeback. Sylvia Fowles, age 34, looked like the best version of herself with 17 points and 18 rebounds. If Collier can back her up by playing at her best on Tuesday, the Lynx may be able to upset the Storm.

Highlights: A look at Collier’s 2019 Rookie of the Year season