Name a better duo than Stewie and Sue 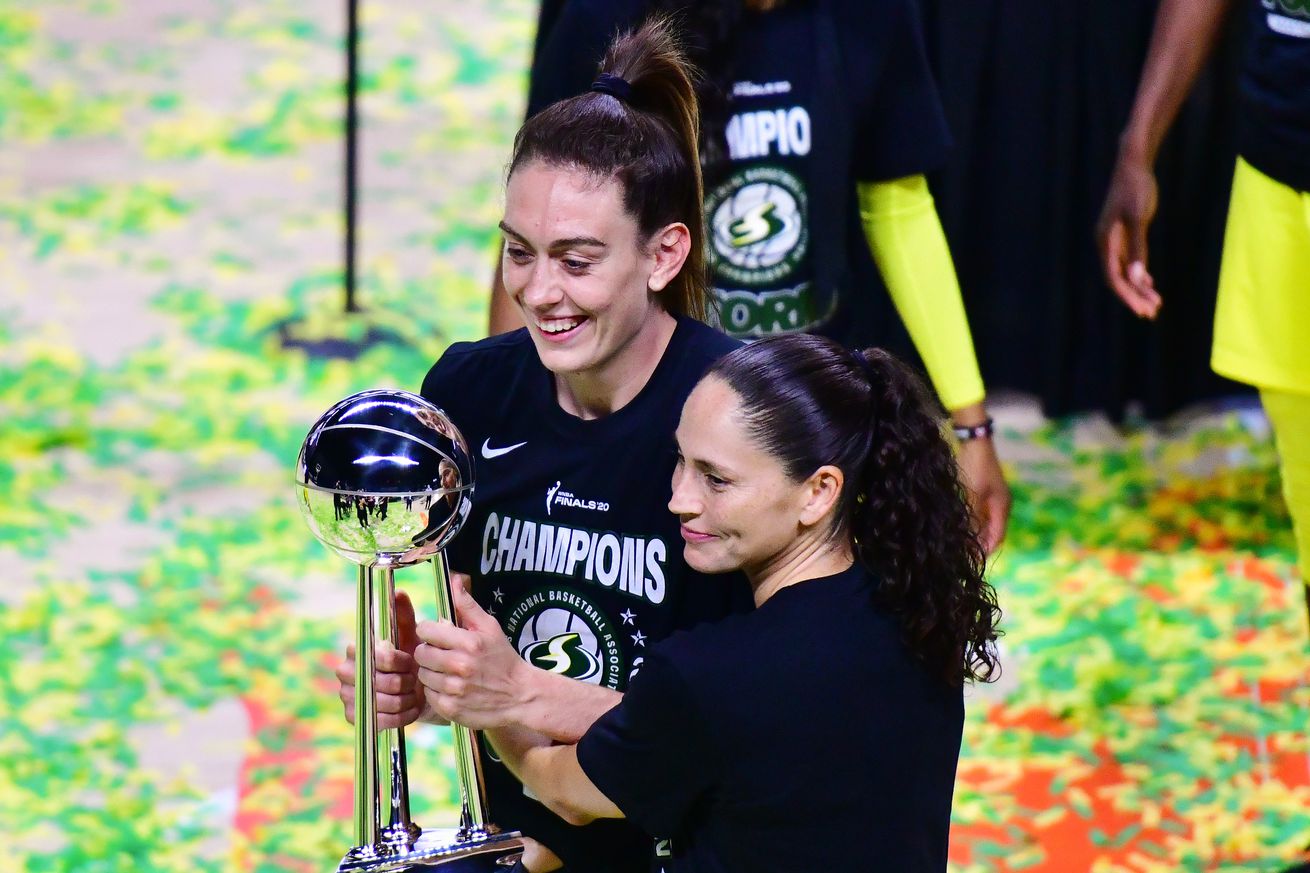 In leading the Seattle Storm to their second title in three seasons, Sue Bird and Breanna Stewart have established themselves as one of the best duos in WNBA history. Yet, are Seattle’s ageless wonder and fantastic phenom the best title-winning twosome in league history? Here are four other outstanding pairings that deserve consideration.

Soon after she and Sue Bird led the Seattle Storm to their second WNBA championship in the last three seasons, Breanna Stewart offered an apt comparison to her and Bird’s superstar pairing, insisting they are like, “Mahomes and Brady … if only they were on the same team.”

The @breannastewart30 and @sbird10 duo is one of the best in sports history.

Bird, like Brady, is the ageless veteran wonder, winning at a high-level way past what was supposed to be her prime. Stewart, like Mahomes, is a rising phenom, dominating the game as she expands its horizons.

The Bird-Stewart duo also could be compared to the Los Angeles Lakers’ championship-winning pair of LeBron James and Anthony Davis. James seemed to recognize the similarities, too, and shouted out the work that his fellow year 17er is still doing.

However, while Bird and Stewart have more than earned such lofty comparisons, it is worth asking if they are, in fact, the best duo in WNBA history. The 24-year history of the WNBA has produced some impressive pairs of playoff performers.

In reverse chronological order, here are five fantastic duos that won at least two titles together. Should Stewart and Bird be considered the very best?

The 2018 WNBA season introduced Bird and Stewart as a potent postseason pair. In that season’s playoffs, Stewart averaged 24.6 points, 6.9 rebounds and 2.5 assists, while Bird added 10 points and 6.9 assists.

Both also were closeout queens. In the epic five-game semifinals against the Phoenix Mercury, Bird was a masked maestro, burying her buddy Diana Taurasi’s team with a bevy of clutch buckets. Bird finished with 22 points and Stewart, for good measure, chipped in 28 points. In Game 3 of the Finals, Bird and Stewart closed out the Washington Mystics with authority. Bird scored 10 points and tossed 10 assists; Stewart dropped 30 points and grabbed eight rebounds, winning Finals MVP.

In 2020, both Bird and Stewart were even better. Bird perfected her preternatural passing, tallying 9.2 assists along with 9.5 points. Stewart upped her playoff averages across the board, totaling 25.7 points, 7.8 rebounds and four assists per game.

In Game 1 of the Finals, the pair put up starry stat lines. Bird notched a WNBA Finals-record 16 assists. Stewart nearly set the Finals scoring record, pouring in 37 points while also snagging 15 rebounds and slinging four assists of her own. These numbers had her well on her way to a second Finals MVP.

The Minnesota Lynx dynasty often is thought of as an ensemble. The foursome of Maya Moore, Seimone Augusts, Lindsay Whalen and Rebekkah Brunson captured the championship in 2011 and 2013. In 2015, Sylvia Fowles made the quartet a quintet, resulting in two more titles in 2015 and 2017.

Yet, while the final piece of a fantastic fivesome, Fowles also formed a dynamic duo with Moore.

The 2015 and 2017 Finals MVP, Fowles established herself as the steady force that would sustain the Lynx dynasty. Moore also was excellent during Minnesota’s final two title runs.

For the 2015 postseason, Moore put up a stat line of 23.4 points, 7.3 rebounds and 2.6 assists. Through the first two rounds, she was especially sensational. She opened the playoffs with games of 33 points and 27 points, helping the Lynx defeat the Los Angeles Sparks in three games. Next, Moore knocked out the defending-champion Mercury in outlandish fashion, scoring 40 points in Game 2 of the semifinals.

Through the first three games of a hard-fought Finals against a tough Indiana Fever team, Moore maintained her marvelous play, posting 27 points and 12 rebounds in the first game, 19 and eight in Game 2 and 24 and 7 in Game 3.

Yet, as the Lynx continued to battle the Fever, Moore hit an untimely slump, with uncharacteristically inefficient performances in Games 4 and 5. So Fowles stepped up.

For the entire playoffs, Fowles averaged a solid but unspectacular 12.6 points and 9.7 rebounds, quietly doing the dirty work as she was finding her footing as a member of the Minnesota dynasty. In the Finals, she went up a level. In Game 5, Fowles forcefully finished the Fever with 20 points and 11 rebounds.

In 2017, Fowles once again was ferociously fabulous in the Finals. In the Lynx’s three wins over the Sparks, she averaged 17.3 points and 17 rebounds. Although an unflashy big, Fowles has been an absolutely elite Finals performer.

Maybe Moore will return in 2021, reprising her pairing with Fowles. Could the Lynx then win a title surrounded by a fresher-faced supporting cast?

Unlike the pairs that precede them on this list, Diana Taurasi and Penny Taylor together captained the Phoenix Mercury to three titles — 2007, 2009 and 2014. While their cast of co-stars would change, with the likes of Cappie Pondexter, Tangela Smith, DeWanna Bonner, Candice Dupree and Brittney Griner all offering critical contributions, Taurasi and Taylor were Phoenix’s constants.

Although Pondexter would win Finals MVP in 2007, Taurasi and Taylor also were superb. During their inaugural title run, Taurasi averaged 19.9 points, 4.3 rebounds and three assists. Taylor totaled 19.3 points, 7.9 rebounds and 3.8 assists per game.

Albeit in a loss, Taylor was absolutely outstanding in Game 1 of the Finals against the Detroit Shock, scoring 32 points, grabbing nine rebounds, tossing seven assists, nabbing three steals and blocking two shots. Taurasi turned in a 30-point performance of her own in the Mercury’s Game 2 victory. Taylor also was awesome in the do-or-die Game 5, going an absurd 18-of-18 from the free-throw line as she totaled 30 points, and the Mercury won their first title.

In 2009, Taurasi led the way, posting 22.3 points, 5.9 rebounds and 3.8 assists for the entire playoffs before capturing Finals MVP. Taylor, having missed much of the 2009 regular season due to ankle surgery, served as a super sixth woman.

The duo bookended the 2009 Finals, a five-game tussle against Tamika Catchings and the Indiana Fever, with excellent outputs. In a Game 1 win, both tallied 23 points. In Game 5, Taurasi closed out the Fever with 26 points, with Taylor chipping in 14 points off the bench. They also combined to go a sparkling 15-of-15 from the foul line.

Five seasons later, Taurasi and Taylor took Phoenix back to the top. Injury troubles again limited Taylor in the regular season. However, her return supercharged the Mercury and turned them into one of the most elite teams the WNBA has ever seen.

In the Finals, Taurasi sealed the sweep of the Chicago Sky with 25 points and five assists, giving Phoenix its third title. Through the Mercury’s 7-1 postseason run, Taylor served as the connector, doing the things that are often overlooked but undoubtedly essential to winning at the highest level.

If Leo Taurasi-Taylor one day leads the forlorn Phoenix Suns to a championship, Taurasi and Taylor’s status as the WNBA’s best pairing will be unassailable.

That Sue Bird appears twice on this list is a testament to her uncommon, incredible longevity. For two decades, a Bird-led duo has descended from the Pacific Northwest to trouble opponents across the WNBA.

With Lauren Jackson, she formed one of the league’s first truly modern guard-big pairings. Bird made her mark in the WNBA not as a traditional floor general but as a point guard who also could drill pull-up 3-pointers. Jackson was a versatile big, combining a conventional post game with the ability to step out and drain jumpers, including 3-pointers.

In 2004, Jackson posted 19.6 points and 7.5 rebounds in a playoff run that ended with Seattle’s first championship. Bird added 8.5 points and 5.3 assists. In the semifinals, when the Storm faced the Yolanda Griffith-Ticha Penicheiro Sacramento Monarchs in a three-game tilt, Bird was limited due to a facial injury — the origin of Masked Sue Bird. Jackson, however, was magnificent, averaging 27 points and nine rebounds.

As they also would do a decade later, the Storm went undefeated during their 2010 trip to the title. Jackson and Bird did the critical work. In a tough two-game sweep of the defending-champion Mercury in the semifinals, Jackson had 23 points and 17 rebounds in Game 1, while Bird added 10 assists. In Game 2, Bird recorded 16 points and eight assists and Jackson registered 20 and eight.

However, while often thought of as a classic WNBA duo (unlike Moore and Fowles), Bird and Jackson did receive significant boosts from clear third stars in their two title runs. In the 2004 Finals, it was Betty Lennox who helped to propel her teammates past the Connecticut Sun and to a championship, scoring 27 points and 23 points in Seattle’s two wins. Meanwhile, Swin Cash assisted Bird’s and Jackson’s ascension to their second championship, averaging 16.1 points, 4.9 rebounds and three assists.

Jackson claimed Finals MVP in 2010. In a close three-game sweep of the Atlanta Dream, she was a force, averaging 22.3 points and eight rebounds. Soon thereafter, injury concerns would cut short her career, denying this duo the opportunity to earn additional titles.

For those of us who were at impressionable ages when the WNBA debuted in the late 1990s, it is hard not to consider Coop and Swoopes to be the W’s all-time best. Yet, it is not just nostalgia that earns the Houston Comets’ duo a place on this list — their four championships certify their spot.

Tina Thompson, of course, also was absolutely critical to the Comets’ dynasty — an ever-overqualified third star. Yet, it was either Cooper or Swoopes who was most responsible for each of Houston’s four-straight titles.

1997 belonged to Cooper, as Swoopes was limited after giving birth to her son. On the Comets’ two-game path to the championship, Cooper cooked the Charlotte Sting for 31 points before blitzing the New York Liberty with 25 points.

In the 1998 playoffs, Cooper and Swoopes emerged as a powerful pairing. Over the course of the Comets’ run, Cooper averaged 25.8 points and 4.4 assists while Swoopes contributed 14.6 points, 10 rebounds and 5.2 assists. After dropping Game 1 of the Finals to the Phoenix Mercury, the duo ensured Houston would earn a second-consecutive championship. Cooper had 27 points in Game 2 and 23 points, along with 6 assists, in Game 3. Swoopes put up a 14-point, 13-rebound double-double in Game 2 before totaling 16 points, six assists and five rebounds in Game 3.

Although Cooper and Swoopes were not quite as sharp in 1999, they did enough to take the Comets to a third-straight title. In a grimy three-game Finals against the Liberty, Cooper carried the load, scoring 29 points and 24 points in the Comets’ Game 1 and Game 3 wins, respectively. She thus secured her third Finals MVP.

In the 2000 regular season, Swoopes supplanted Cooper as the Comets’ 1A star. Yet, in the playoffs, Cooper raised her play, resulting in she and Swoopes again dominating as a dangerous duo. Despite a newly-expanded playoff format, Houston went 6-0. In her final playoff run, Cooper averaged 22.7 points and 3.7 assists. Swoopes was good for 18.8 points, 5.7 rebounds and 3.2 assists.

In Game 2 of the Finals, the pair punched out the Liberty. While Swoopes led with 31 points, Cooper’s 25 points, seven assists, four rebounds and three steals earned her a fourth, and final, Finals MVP.

If Cooper had not retired, it is hard to imagine the duo, assisted again by the steady Thompson, not finding their way to a fifth-consecutive championship.

Like Bird, Stewart may soon form another dynamic duo with a fellow Storm player. If Bird ever retires, Jewell Loyd is ready to replace her as Stewart’s premier partner. Loyd has yet to establish herself as a consistent postseason performer, but the Gold Mamba has been a Game 1 killer in both of the Storm’s recent runs to the Finals. In 2018, she dropped 23 points in both Game 1s. In 2020, she bettered those marks by scoring 25 points in Game 1 of the semifinals and 28 points in Game 1 of the Finals.

Other potentially potent pairings to keep an eye on include the top two players from the 2019 WNBA draft and their 2020 draftee partners. In Minnesota, Napheesa Collier and Crystal Dangerfield could chart the next Lynx dynasty. In Dallas, Arike Ogunbowale and Satou Sabally might one day vault the Wings into elite territory.